We have all got frustrated with a particularly complicated puzzle. You know how the final picture should look but the pieces just won’t quite slot into place. In some cases, you just can not find the right piece. Or in others, you know the piece you need but there just isn’t space to fit it in.

This leads us to a problem facing Wolves this summer…

Will they sign Matheus Nunes? Unlikely at this stage. Will they keep Ruben Neves and Joao Moutinho? Increasingly possible. Enzo Fernandez? He’s a definite target but not an easy one to land.

The make-up of Bruno Lage’s midfield for his second season at Molineux remains a very moveable feast and there are many parts for Wolves to consider as the summer transfer window gathers pace.

So where will the jigsaw pieces fall? The Athletic examines the options…

Just as he was on the pitch for much of last season, Neves is at the heart of Wolves’ plans in the transfer window this summer.

At the end of last season, it seemed a safe bet that Neves would move on with two years remaining on his Molineux contract and his emotional comments following the final game of the season at Liverpool did nothing to dampen such speculation.

There was an acceptance at the club that Neves might see his future away from Wolves. Yet since then: nothing.

There was an expectation that clubs interested in Neves would have made their move by now but, as it stands, there has been a slew of rumors (with Barcelona the most frequently mentioned club) but no formal move for the 25-year-old.

That does not mean that Neves will stay at Wolves next season. But with no movement in the market for the Portugal star, that outcome has increased in likelihood since the transfer window opened. And that will have inevitable knock-on effects for the rest of the club’s planning for their midfield.

So, too, will be the future of Joao Moutinho who, as things stand, is no longer a Wolves player.

The 35-year-old is out of contract and technically a free agent but he remains in talks over a new deal and, despite negotiations stalling for a while over the length of any agreement, there is a quiet confidence that Moutinho will stay. 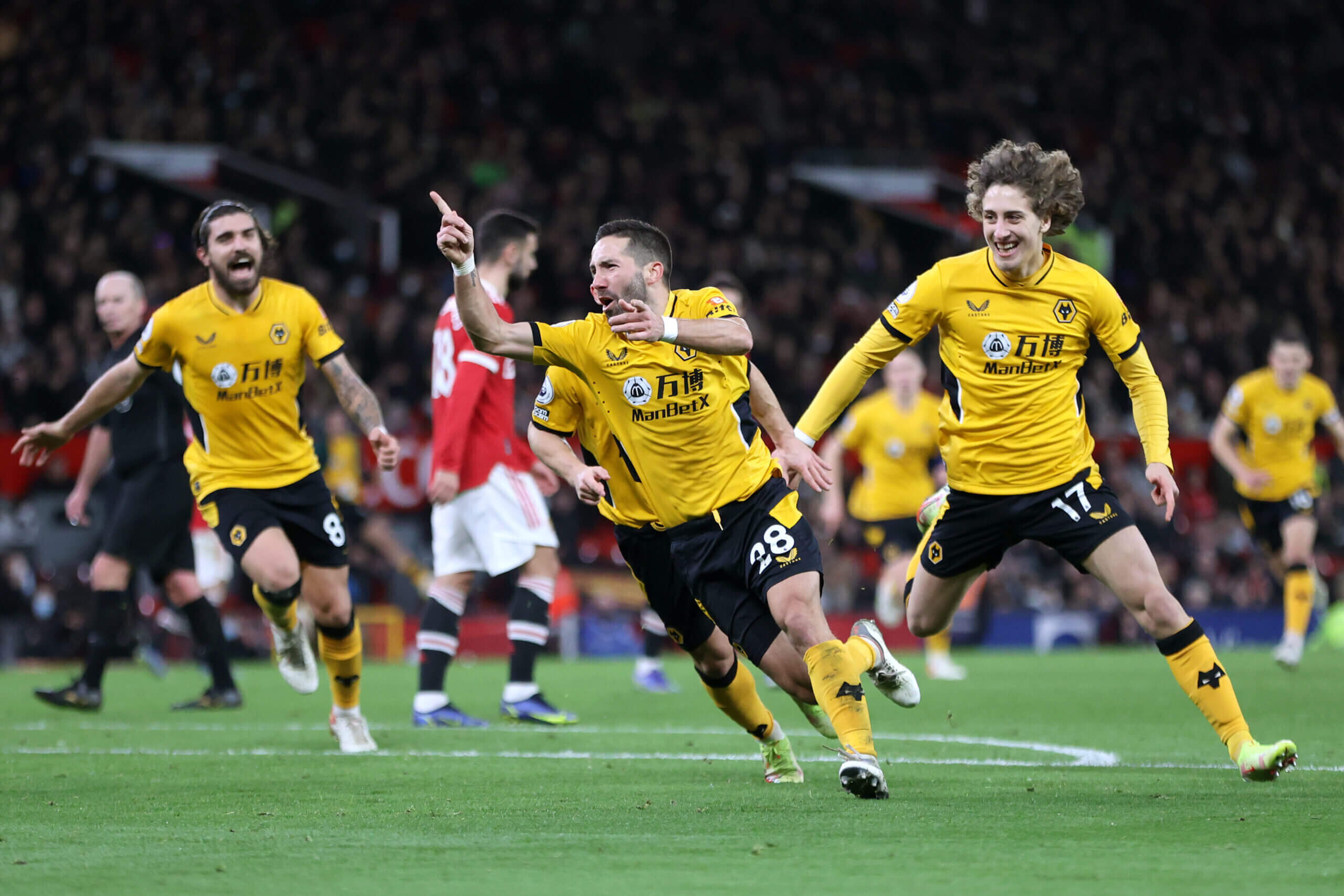 Leander Dendoncker has entered the final year of his Wolves contract so the club would, inevitably, consider offers for the Belgian considering he could leave for free at the end of the upcoming season.

But unless the transfer picture changes, it is conceivable that all three established internationals who shared central midfield duties for the majority of last season could remain for next season.

At a club where the stated aim is to become self-sustaining, that would leave little room for maneuver when it comes to adding midfield options.

It would certainly all but rule out a swoop for Nunes, who has been the subject of the most intense speculation in the last couple of weeks, especially in a Portuguese media that buzzes routinely with Wolves transfer stories each summer – unsurprisingly, given the club’s penchant for players from the country.

It is true that Wolves like Nunes and his Sporting team-mate Joao Palhinha, as previously reported and analyzed by The Athletic.

Further talks have been held this summer, with the club keen to have options available for all eventualities. Sources in Portugal have told The Athletic they expect Nunes to be a Premier League player this season, even insisting that Wolves are his most likely destination.

It is not that simple, though.

The attraction of Nunes is clear. The 23-year-old has taken his game to the next level this season with his performances for Sporting.

Using smarterscout, a website that employs advanced analytics to break down elements of a footballer’s game into different performance, skill and style metrics, we can compare Nunes to Wolves’ existing Portuguese midfield stars.

And the respective ‘pizza charts’ for the trio show the Sporting man would add different qualities, with his game based more around ball carrying, dribbling and defensive intensity than Moutinho and Neves, who rely more on passing.

Nunes scores highly for carry and dribble (94 out of 99) and link-up play (89 out of 99) volumes, underlining his reputation for progressing his team up the field with the ball at his feet – a quality that first attracted Everton’s recruiters more than a year ago when they saw him as an ideal box-to-box No 8, combining ball-carrying ability with a defensive intensity (98 out of 99).

He ranks higher in all three metrics than both Moutinho and Neves. 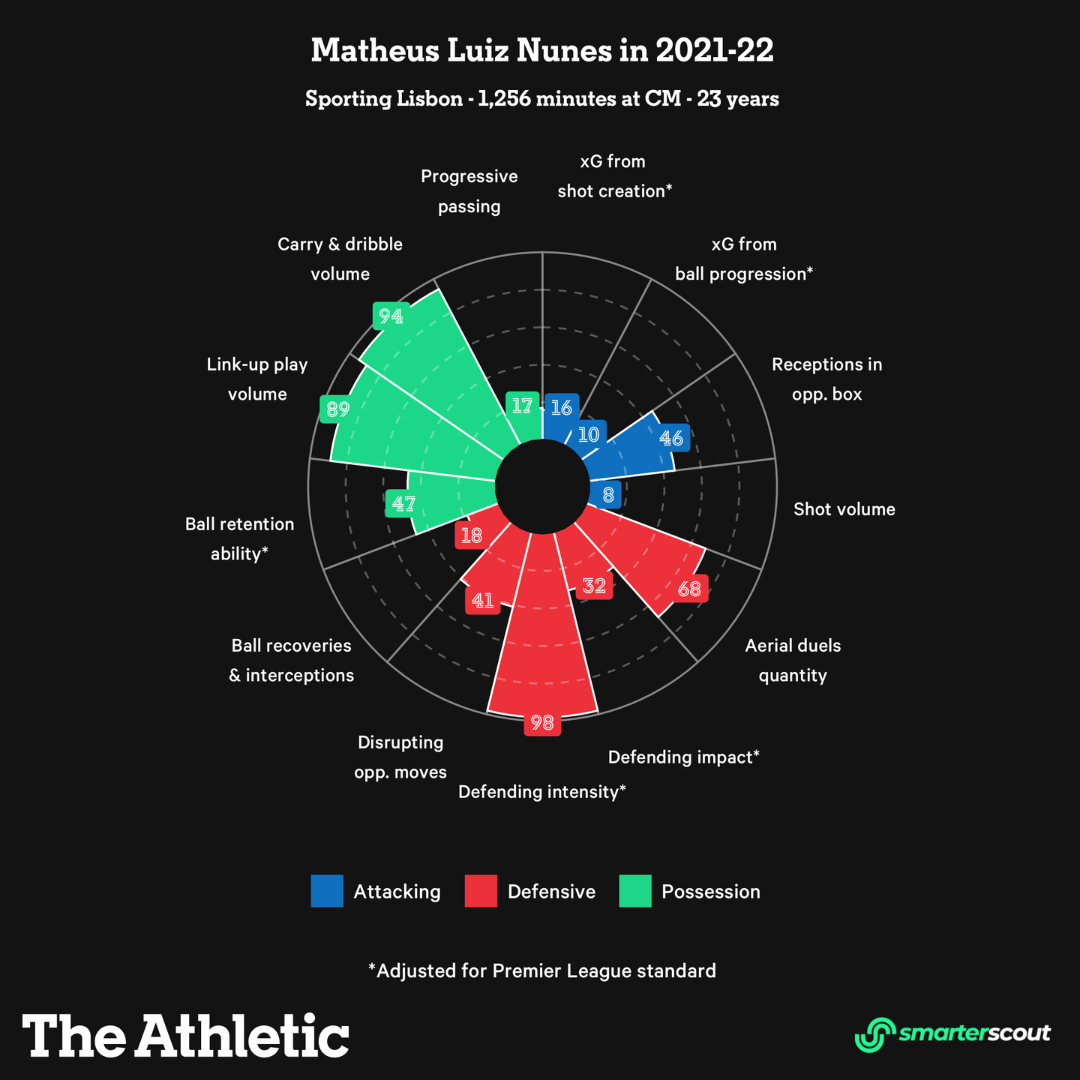 The veteran Moutinho scores much higher for his passing, with his ball retention and progressive passing – a gauge of his ability to pass effectively into attacking areas – rating strongly. 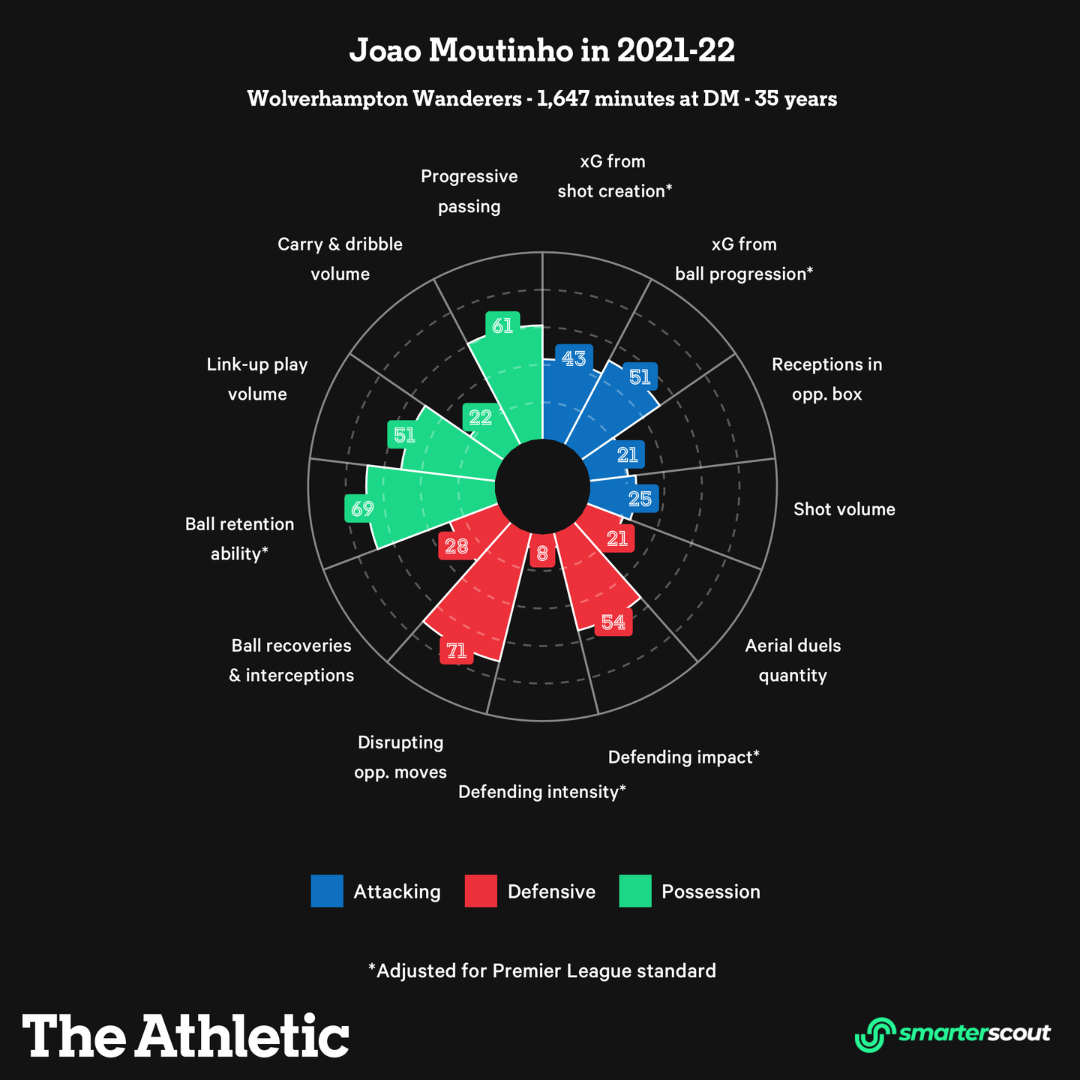 And while Neves scores a fraction lower for ball retention, he rates the highest of the three players for progressive passing, emphasizing his talent for passing the ball accurately up the field. 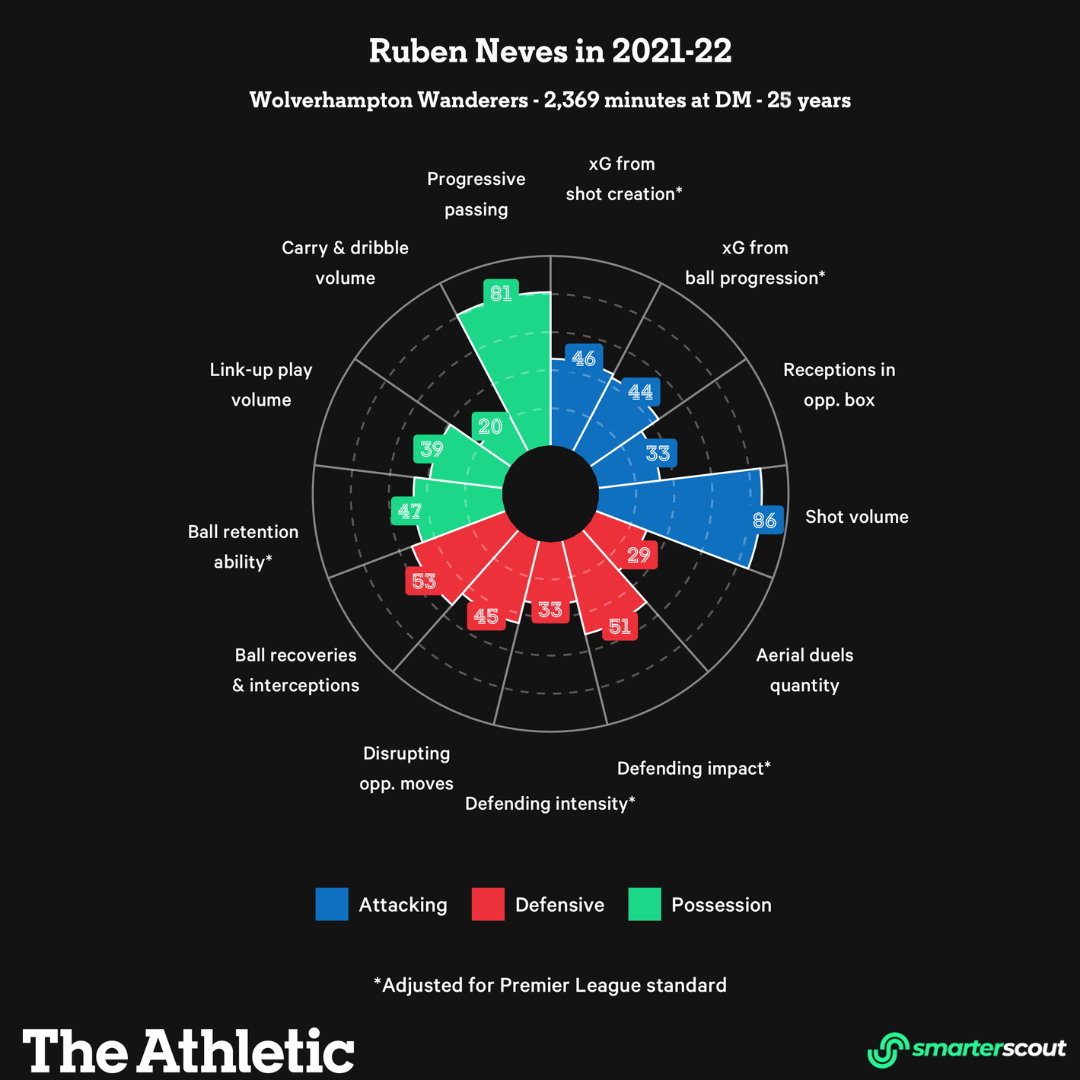 Yet as things stand, Nunes swapping Lisbon for Wolverhampton is unlikely for several reasons, The Athletic has been told.

First, the player himself has yet to be convinced that Wolves would be the right move for him. Having been name-checked by Pep Guardiola among others as one of the best young players in the world, he perhaps sees his future in the Champions League. But, more importantly, meeting Sporting’s asking price of around £ 40 million would not fit with Wolves’ modus operandi.

If Neves and Moutinho remain then that kind of outlay on another central midfielder seems inconceivable, but irrespective of the futures of existing Wolves players, the club’s current business model revolves around unearthing cheaper gems in the market with a big potential for resale value.

Nunes might have fitted that criteria a year ago, when Everton were discussing the prospect of signing him for an initial £ 18 million with a further £ 2 million in add-ons, but his development in the subsequent 12 months have seen his value more than double.

One player who fits the bill a little better for Wolves is Fernandez, the 21-year-old Argentinian whose impressive season for River Plate has drawn attention from clubs in Europe. In fact, the £ 17 million release clause in his River Plate contract puts him in an almost identical position to Nunes a year ago.

Fernandez, who has three goals and three assists from 24 top-flight appearances in Argentina, is a player very much on Wolves’ radar and a more realistic option than Nunes should they decide to add to their midfield options.

But currently there is no agreement, either between the clubs or Fernandez, with Benfica the clear favorites for his signature. although the Portuguese club still have work to do to agree terms with the player.

The signing of an additional midfielder would also allow Luke Cundle, the highly rated under-23s player who got his first taste of Premier League action last season, to gain valuable experience on loan.

That new player seems unlikely to be Palhinha, despite Wolves keeping tabs on the 26-year-old defensive midfielder for several transfer windows. With the final shape of the Molineux midfield jigsaw still unclear thanks to Neves and Moutinho’s positions, Wolves did not press ahead with a move and Palhinha now looks poised to join newly promoted Fulham.