Perhaps it’s too simplistic to suggest that Real Madrid only have two players who can truly hurt Liverpool.

After all, this is a Madrid side boasting the midfield guile of Toni Kroos and Luka Modric. Marco Asensio can produce moments of magic. Rodrygo has proved crucial in this Champions League campaign. Federico Valverde takes up clever positions, Eduardo Camavinga has been crucial from the bench, and this is a squad that can afford to have Eden Hazard, Isco and Gareth Bale as peripheral figures.

Stopping Benzema is the primary task but, tactically, Liverpool might not change too much to deal with him. First, because they have Virgil van Dijk, surely Europe’s finest center-back. Second, because at times, Benzema has produced goals that feel truly unstoppable – struck from positions no defender would venture out to, and fired into parts of the goal the keeper could never reach. 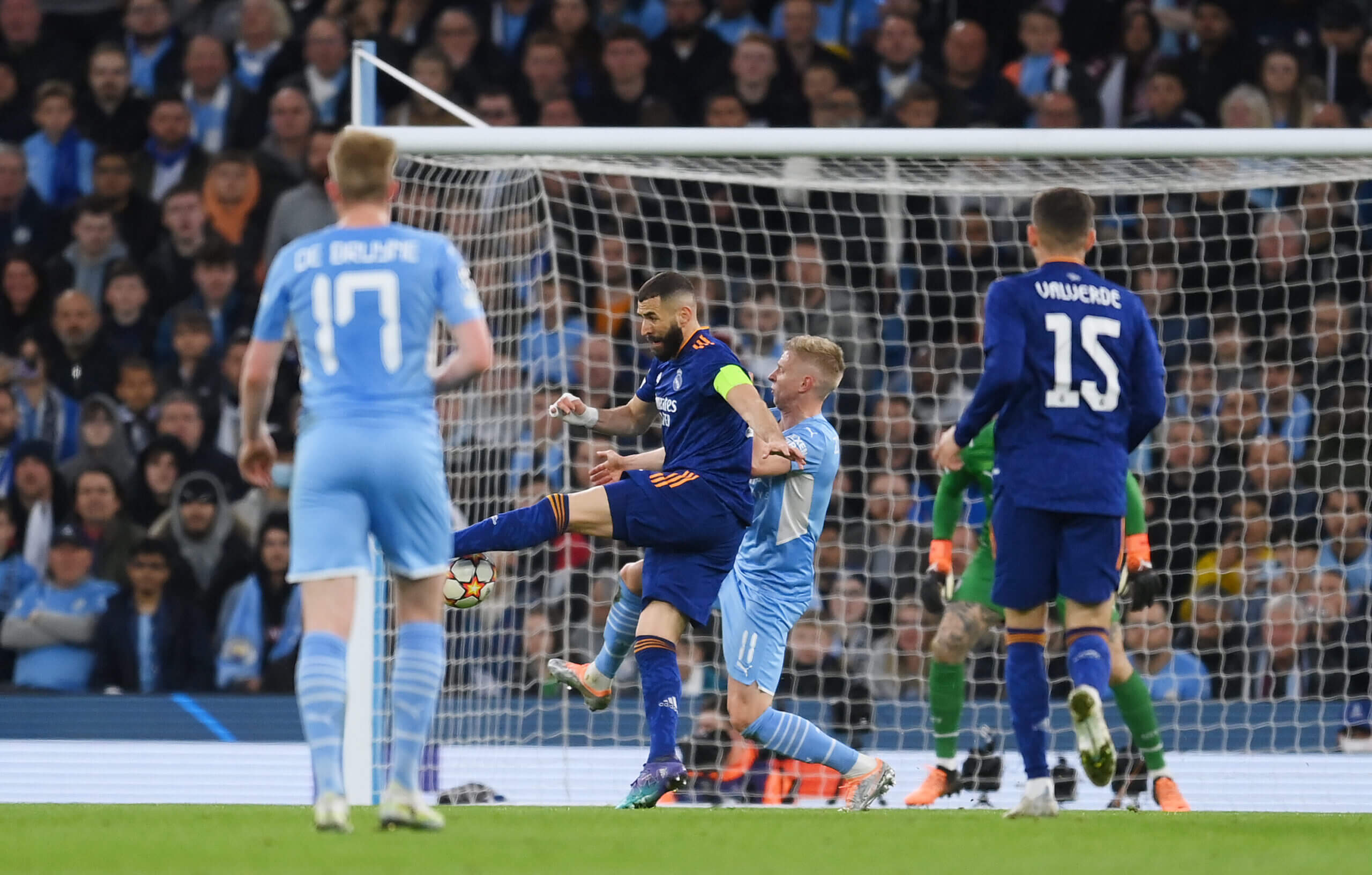 Benzema scores against Manchester City at the Etihad, meeting a cross ahead of Oleksandr Zinchenko and clipping a finish beyond Ederson (Photo: David Ramos / Getty Images)

Stopping Vinicius might be more achievable. On his day, the Brazilian is a devastating attacker. On other occasions, he can struggle to influence the game from the wing, and is unable to hurt the opposition if not released in the right situations. Liverpool must take lessons from their previous encounter against Real.

In last season’s quarter-final, a two-legged tie that Real essentially won in the first game, long balls in behind Trent Alexander-Arnold proved crucial in a 3-1 win.

For the first, Vinicius raced in behind to chest the ball down, then fired past Alisson. For the second, Alexander-Arnold got himself into a muddle and nodded the ball across his own defense for Asensio to convert. Liverpool got a goal back, but Vinicius added a late third.

Clearly, stopping Vinicius will be crucial.

Before this year final, those goals make for interesting viewing. Yes, there’s a major caveat here – Liverpool were without all their regular center-backs, and if there was any doubt that Ozan Kabak and Nathaniel Phillips were a significant downgrade, it’s worth pointing out that the former was relegated with Norwich this season, and the latter was winning promotion from the Championship with Bournemouth. Still, there are lessons to learn.

Real’s opener is interesting because Vinicius makes a run straight between two Liverpool defenders, who are both concerned with other Real players. Because Mohamed Salah is focusing on pressing higher up, he’s not in a position to watch Ferland Mendy, Real’s left-back on the far side. Alexander-Arnold is therefore facing towards that side, rather than ready to deal with a run into the channel. 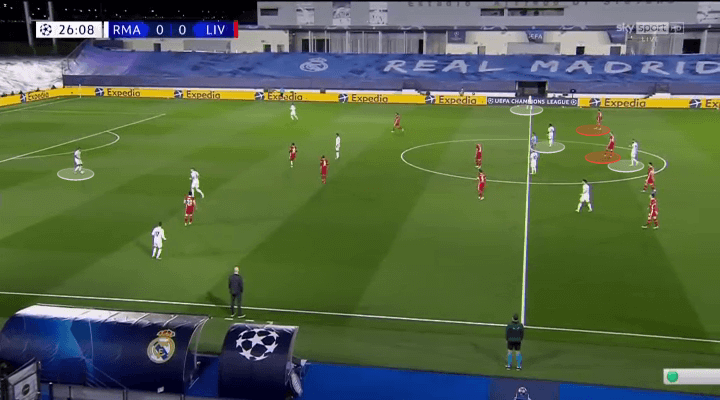 In the center, meanwhile, Phillips has to keep an eye on Benzema. And that helps to open up an extra bit of space for Vinicius’ run. Kroos fires the ball over the top… 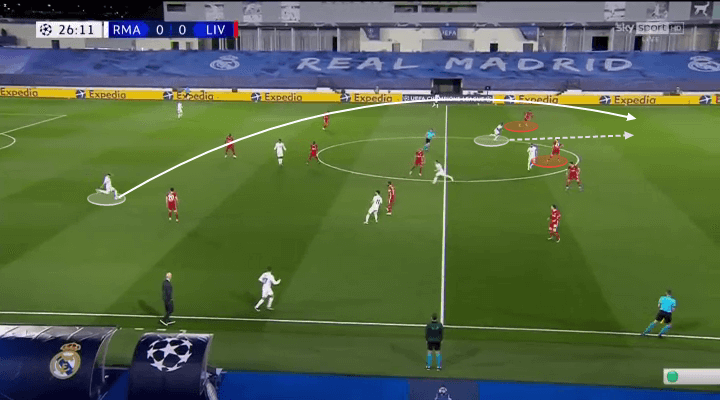 … And Vinicius brings it down excellently on his chest, before firing home. 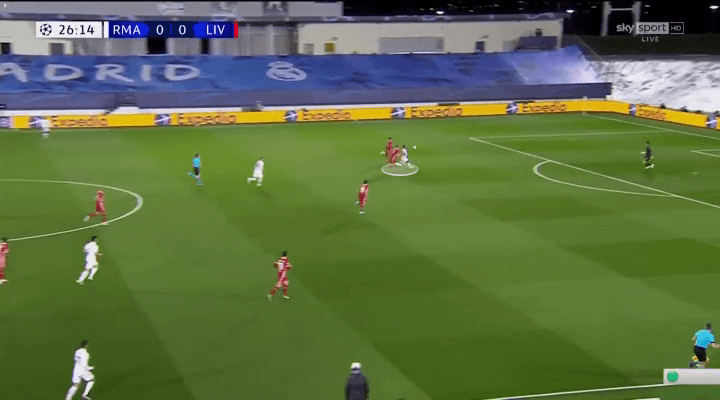 The second goal also came from a Kroos ball over the top. This time it’s Mendy, rather than Vinicius, making the run in behind. 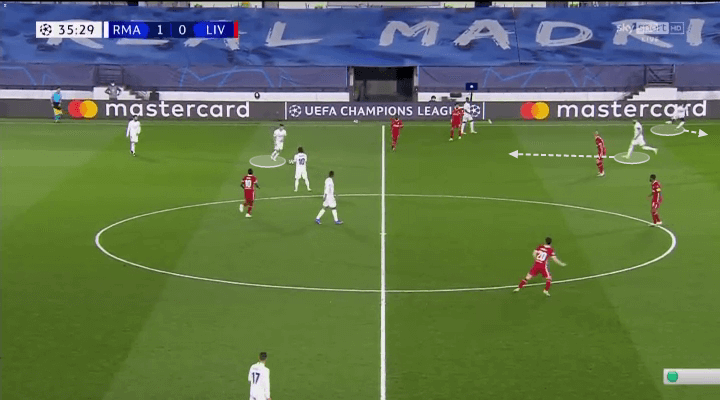 But the notable thing here is Benzema’s reverse movement towards the ball. Although this does not directly create space on this occasion, Real use this approach a lot in that area of ​​the pitch – Benzema acting as a false nine and Vinicius sprinting in behind. It’s more or less what Liverpool will attempt to do at the other end, probably with Sadio Mane dropping deep, then Salah and Luis Diaz running in behind.

But Real’s play is very much concentrated down that flank, particularly if Valverde – who goes in behind less – plays from the right. Besides, if you’re Benzema, why would you decide to play up against Van Dijk?

Liverpool must prevent being dragged out of position by Benzema moving deep, although it remains to be seen who plays on the right of the center-back pairing alongside Van Dijk – Joel Matip or Ibrahima Konate. The latter would probably be better in terms of recovery pace, which might be crucial in this situation. 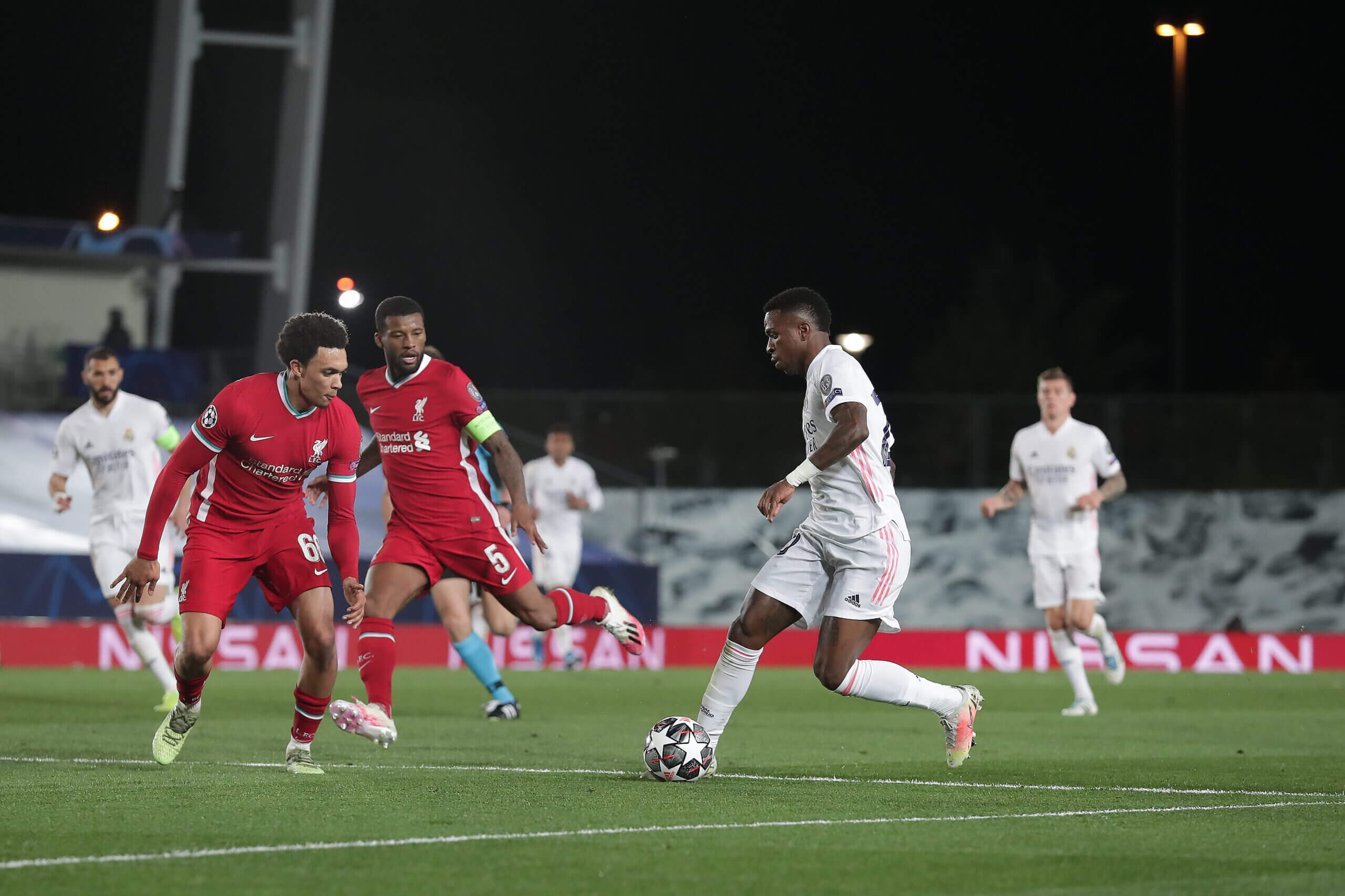 But there are three ways Liverpool should seek to win the battle down that flank.

First, Alexander-Arnold must defend well in one-against-one situations. Often criticized for his defensive play, at times – notably in the FA Cup final against Chelsea – he is actually very difficult to get past when facing his opponent. The problems tend to come when Alexander-Arnold is high up the pitch and leaves space in behind.

The second factor, though, is that Alexander-Arnold must attack. He remains Liverpool’s most creative player, and the potential absence of Thiago makes his passing range even more crucial to Liverpool’s attacking play. Vinicius is reasonably diligent defensively, and Alexander-Arnold might be able to force him back into Real’s own third, where he’s considerably less dangerous.

And third, if Alexander-Arnold wants to attack while Liverpool are wary of the space in behind him, then Klopp might need to use one of his midfielders in an almost permanent covering role. Jordan Henderson has performed this task at times and would be perfect for the job. The complication comes if Fabinho, as well as Thiago, is not fit to start, and Henderson needs to play deeper. In that situation, James Milner would presumably be the next best bet.

The importance of individual clashes can be overstated going into matches – central midfielders are often in direct confrontation with their opposite numbers less than you might expect, and center-forwards drop off center-backs more than they used to.