Nicolo Zaniolo’s goal in the 32nd minute earned Roma an advantage and an hour of hard defending from Chris Smalling and Rui Patricio held it.

Roma did not play thrilling football in the inaugural Europa Conference League final. But they played winning football.

Jose Mourinho’s men tried to kill time by the corner flag as early as the 80th minute, and a late foul on Tammy Abraham saw the striker writhe around in pain for a few moments only to wink towards his dugout, pleased he had halted a nascent Feyenoord attack.

Ultimately, Roma won Europe’s third-tier club competition because they understood they were in a cup final better than their opponents. “Football is about winning and Mourinho wins,” said Owen Hargreaves on BT Sport.

Victory over Feyenoord means Mourinho is the first manager to win all three active major European competitions. On top of that, the Portuguese has won all five European finals in which his sides have competed. Oh, and his teams have not conceded a goal since Mourinho’s first tilt at the big time, Porto’s 3-2 win over Celtic in the 2003 UEFA Cup final. 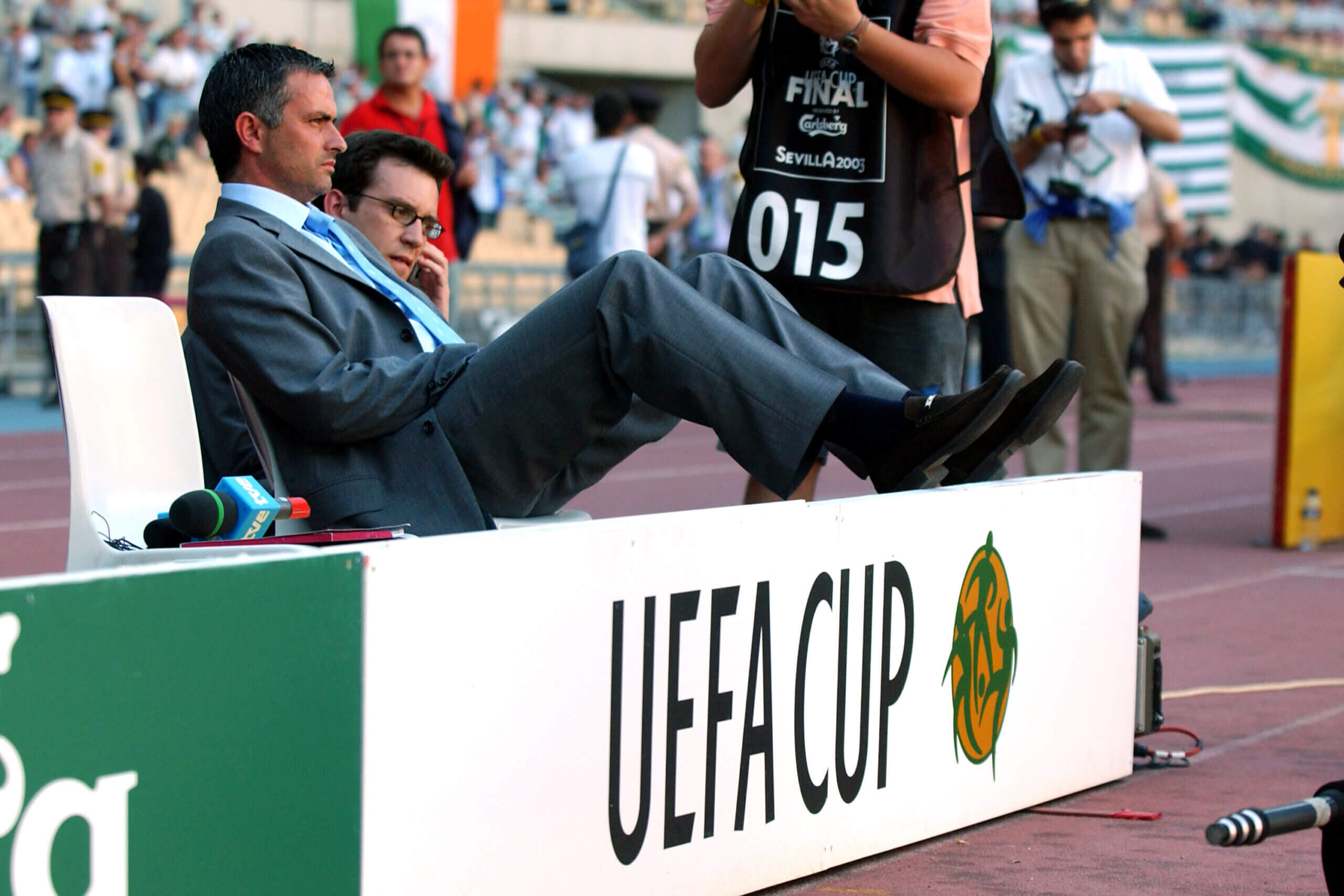 “He’s still got it” was the refrain of Mourinho’s biggest fans following the victory. But what is that it and why is it so effective in cup finals?

The Europa Conference League is the 26th trophy of Mourinho’s managerial career and his tale of the tape in cup finals reads: played 30, won 16, lost 10. Goals for? 47. Goals against? 36.

It’s not bad, particularly when you bear in mind Opta considers a cup final that goes to a penalty shootout as a draw. Mourinho has prevailed in one of those four draws after a penalty shootout, the 2008 Supercoppa Italiana between his Inter Milan side against Roma.

The most likely reason for Mourinho’s expertise in finals lies in what Diego Torres called his “winning principles” in his biography of the manager, The Special One: The Dark Side of Jose Mourinho.

According to Torres, Mourinho goes into big games with a seven-point plan:

When competing in a league over the course of a season, Mourinho’s seven points have now arguably reached the point of diminishing returns.

If you look at Europe’s top five leagues (in England, Spain, Italy, Germany and France) there are too many rival teams of comparative strength for Mourinho’s methods to work every time. The Premier League simply had too many big games for Mourinho’s Manchester United or Tottenham Hotspur sides to successfully navigate using this methodology.

For all of Wednesday night’s celebrations, Roma started 2021-22 with aspirations of qualifying for the Champions League and finished in sixth place, one position higher than their previous campaign. It is difficult to win a league title or even compete at the highest level for nine months by waiting to capitalize on mistakes made by your strongest opponents.

In a one-off final, however, Mourinho’s methods will almost always serve a purpose.

As his former Chelsea player Joe Cole observed at half-time on Wednesday, the single-elimination format of a final changes many a manager’s (and indeed a player’s) approach to the game. Feyenoord went into the Conference League final wanting to win it. Roma went to Tirana, Albania, knowing they must first do everything in their power to avoid anything that might lead to defeat. 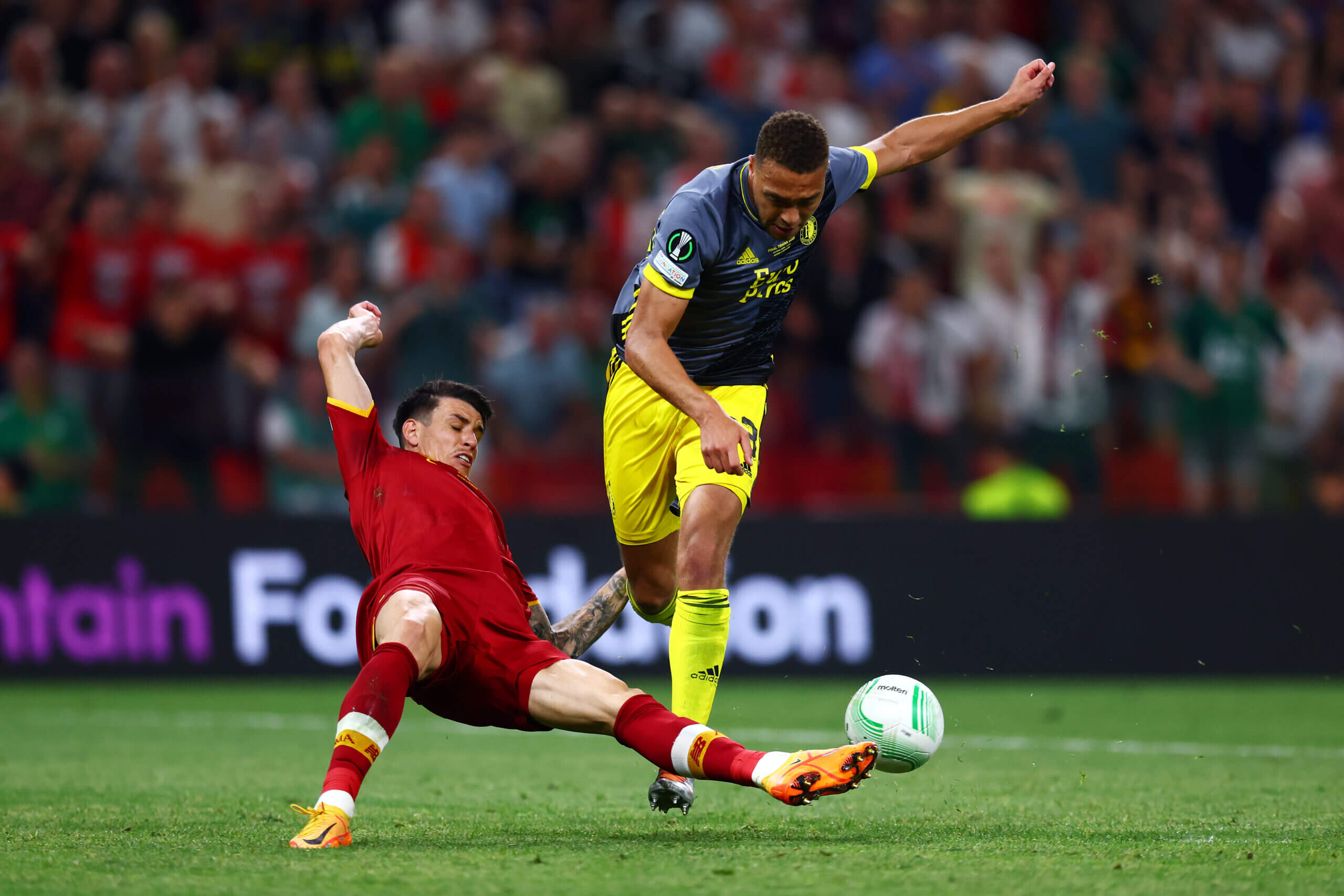 An easy illustration of Mourinho’s approach to finals comes via possession statistics.

In that 2003 UEFA Cup final, Porto had 56 per cent of possession and conceded two goals. In the Champions League final against Monaco a year later it was 45 per cent. In 2010, Mourinho’s Inter Milan side had only 32 per cent possession against Bayern Munich. It was a similar story for his wins with Manchester United and Roma; in both cases his teams had the ball only 33 per cent of the time.

Roma triumphed on Wednesday in part because they were happy to let Feyenoord have the ball in less dangerous areas of the pitch and then defended strongly whenever the Dutch side entered the final third. Roma played in a manner not too dissimilar to Manchester United in the 2017 Europa League final.

It is a style of play often seen in modern international football. Didier Deschamps’ France team offer little entertainment for their talent pool and yet won the 2018 World Cup. Fernando Santos ‘Portugal side defeated Deschamps’ team in the 2016 European Championship final using a similar method. Before England reached the final of Euro 2020, manager Gareth Southgate did a study into how international teams win tournaments and modeled England’s play on that of Deschamps ‘and Santos’ sides.

To bring it back to the club game, there has been a slow increase in finals going to extra time and penalty shootouts, as managers opt to reduce the cavalier element of their side’s play for more control.

Finals are a different beast to “normal football”. They are a strange confluence of what happens on the pitch, in the players ‘and managers’ minds and high physical fatigue. Mourinho is effective in finals because he opts to deal with all three narratives by keeping things as simple as possible.

You could see him tell his Roma players to keep calm after Zaniolo’s opening goal, only to burst into tears at full time after the victory. He knew which point was the right moment to focus on technical skills during a final and when he could give in to his emotions.

His post-match interview also displayed his continued talent for imbuing an underdog spirit in his side, while also finding time to put in a concealed jab at a former employer.

“The great thing about my career is that, aside from the Europa League with Manchester United, doing it with Porto, Inter and Roma is very, very, very special,” Mourinho said. “It’s one thing to win when everyone expects it, when you made the investments to win, but it’s quite another to win when something feels immortal. That feels truly special.

“This remains in the history of Rome, but also mine. I was told only I, Sir Alex (Ferguson) and Giovanni Trapattoni won trophies in three different decades. It makes me feel a little old, but it’s nice for my career. ”

Mourinho’s career in 2022 is very different to what it was in 2012 – but what has remained is a talent for winning finals.