Just when it seemed as if it was only a matter of days or even hours before there would be a long-awaited announcement of free agent Lionel Messi rejoining Barcelona on a new deal, the club announced just eight days before the start of a new league season that Messi would not be returning.

A short time after, the club distributed a Messi tribute video, cementing the once-unthinkable reality that Barcelona and Messi are going their separate ways after 21 years.

There was something of a warning when Barcelona-based Spanish daily Marca reported that there was a distinct scenario that signing Messi would not be doable. The club announcement came a couple of hours later, and it pointed the finger straight at the Spanish league, La Liga.

Barcelona’s statement said, in no uncertain terms, that the club and player wanted to do a deal – reports in recent weeks stated that Messi, who became a free agent on June 30, was prepared to take a 50 percent reduction in salary to make it happen – but league regulations made it an impossibility.

“Despite FC Barcelona and Lionel Messi having reached an agreement and the clear intention of both parties to sign a new contract today, this cannot happen because of Spanish LaLiga regulations on player registration,” Barcelona’s statement read.

“As a result of this situation, Messi shall not be staying on at FC Barcelona. Both parties deeply regret that the wishes of the player and the club will ultimately not be fulfilled.”

LATEST NEWS | Leo #Messi will not continue with FC Barcelona

Under La Liga rules that were introduced in 2013, there is a floating salary cap for all teams which limits player wages and acquisition costs to 70 percent of club revenues.

In order to meet that requirement after a drastic reduction in revenues due to the impact of the COVID-19 pandemic, FC Barcelona entered this summer offseason needing to shed well over $ 200 million in salaries just to sign Messi. But the limited transfer activity across Europe meant that the Blaugrana were nowhere close to that figure, and on Aug. 5, the club and player came to the realization that the signing could not happen under the circumstances.

The announcement of a massive private equity investment into La Liga and its clubs only the day before was interpreted by many as helping Barcelona make the financial headway it needed to virtually guarantee the Messi deal. Projections based on La Liga’s revenue-sharing formulas had Barcelona benefiting from a cash infusion of over $ 300 million of the private equity money, of which 15 percent would be used for player signings.

But interestingly, both FC Barcelona and Real Madrid, two of the most heavily indebted La Liga clubs and both founding members of the failed breakaway European Super League, expressed their opposition to the private equity deal with CVC Capital Partners, which is set to receive 10 percent of La Liga’s media revenues in exchange. The plan was nonetheless approved by La Liga’s 42 clubs in a 38-4 vote (Oviedo and Athletic Club joined Real Madrid and Barcelona in voting against). The four dissenting clubs will not be part of the “LaLiga Impulso”.

Observers say that accepting the money would have amounted to the two giants financially attaching themselves to La Liga over the decades to come and thus permanently forgoing their Super League ambitions. It’s the only way to explain why Barcelona, ​​which is reportedly more than $ 1 billion in debt, would refuse that kind of investment, which would have been on par with the projected cash advance of the proposed Super League.

Was the Barcelona-Messi talk all for show?

There’s one line of thinking that Barcelona knew all along it was never going to be in a position to sign Messi and fit his salary within its player budget limits for the upcoming season. Given the way the transfer season was shaping up, and with no takers for its high-salaried players, there was no way that Barcelona could make room for Messi according to league rules.

Because Barca waited until a week before the season to announce it, putting the fault squarely on La Liga and its onerous rules, some media are speculating that the false hope created over recent weeks was a PR ploy to help club management navigate the fan backlash that was sure to come with the forced departure of Barcelona’s greatest player. In the court of public perception, club officials showed that at least they gave it an honest try.

Some have gone so far as to suspect that Messi was also well aware that he was never going to actually sign with Barcelona and that perhaps he wanted to move on from the club ahead of the rebuilding project that’s facing the organization. The “La Liga regulations” are a convenient excuse to depart the club, making it appear like he really wanted to be there and thus keeping his reputation with the fan base intact.

As a free agent, Messi did not need to settle on a pay cut after all, ultimately accepting a big-money offer from PSG.

Another group of cynics believe the Barcelona statement was an attempt to somehow force La Liga to change the rules or carve out an exception for the club.

The thinking goes that La Liga as an enterprise could not afford to lose Messi, especially when it just signed a TV rights deal with US broadcaster ESPN worth $ 175 million per year deal over eight years ($ 1.4 billion). What value would La Liga have without Messi?

But La Liga president Javier Tebas has been steadfast in recent months that there would be no bending of the rules and no special treatment given to Messi or Barcelona. If Barcelona, ​​with its back to the wall, was calling his bluff, it was likely to be disappointed, especially since Tebas’s position was buoyed by the private investment deal. And rule changes a week before the season were highly unlikely.

Barcelona president Joan Laporta ruled out any potential return at his press conference a day later: “I do not want to generate false hope,” he said. “The negotiations with Messi have ended and it’s brought us here without an agreement because of the [La Liga] salary limit. Leo wanted to stay, so he’s not happy. We all wanted him to stay, but now, like us, he is facing the reality of what happened. A reality that can’t be changed. “

How is this different from last summer’s Messi drama?

Last year, the scenario involved other factors. In the summer of 2020, with one year left on his four-year, $ 675-million Barcelona contract, Messi went public about his desire to leave, citing a falling out with club management and a clause in his contract that he believed allowed him to depart. He claimed he had a verbal agreement with then-president Josep Bartomeu to honor the clause and release him from his contract.

But when it became clear that Bartomeu was not about to let the Barcelona legend walk, Messi refused to take the club to court as a matter of principle and opted to stick around an extra season against his wishes.

Many believed that with Bartomeu leaving office and Joan Laporta taking his place earlier this year, there was a good chance that Laporta would find a way to keep Messi at Barcelona given his close relationship with him during his previous tenure as club president, when Barcelona had the most successful run in its history.

But maybe Laporta, too, knew of the likely outcome all along despite campaigning for the presidency based on his ability to give the club its best chance to keep Messi. The financial situation that Laporta (below) inherited is tenuous, and he knew it. We learned all about that reality when he spoke to the media on Aug. 6 and outlined a financial situation that he says was much worse than what he was led to believe, with losses of $ 572 million incurred in the 2020-2021 season. 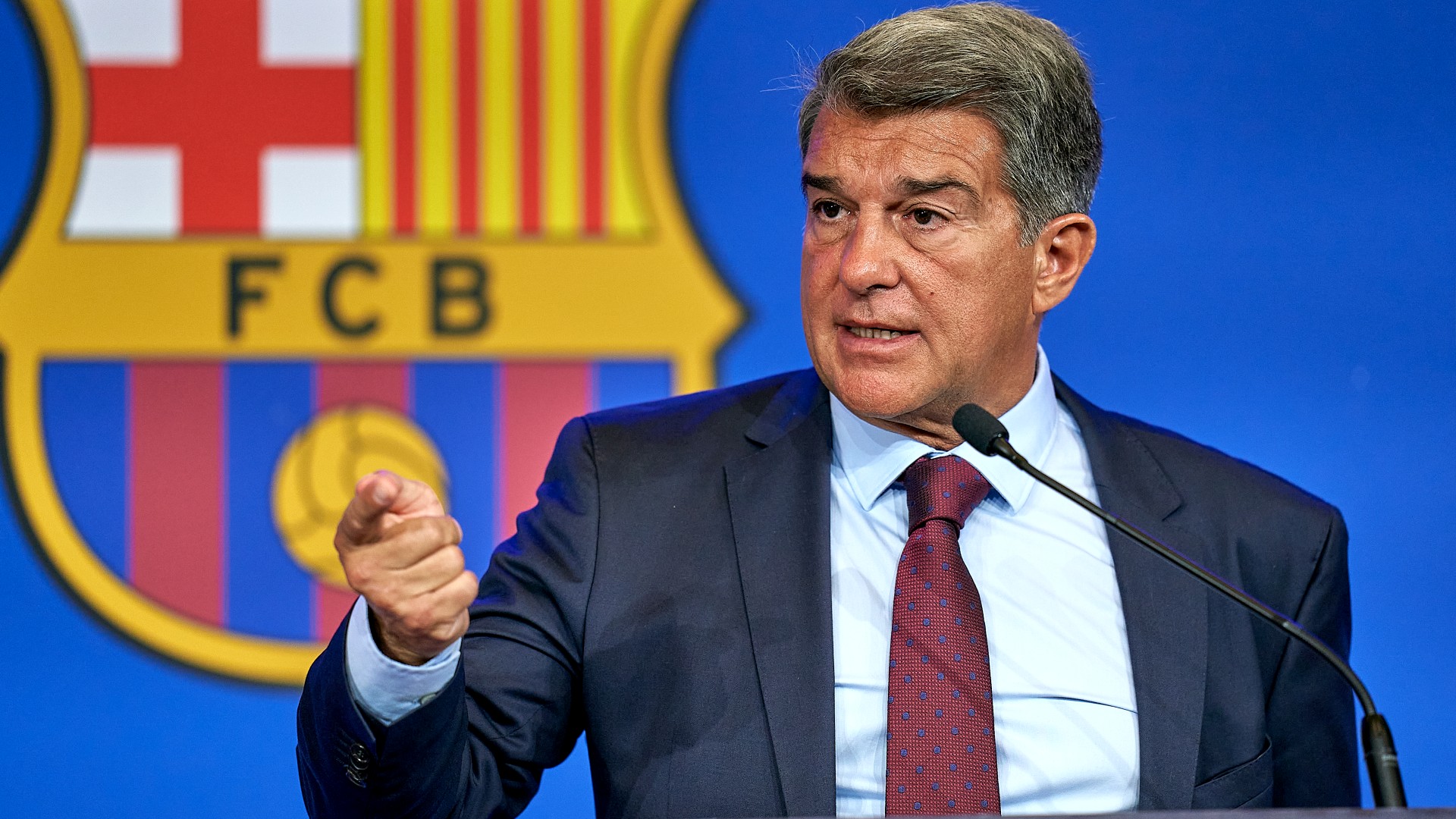 It was a somber meeting with the media during which Laporta did not leave any room for a potential Messi return. In fact, he talked about how Messi was already receiving interest from other clubs, though he stopped short of sharing details. Laporta also mentioned that Barcelona will be arranging for a way to honor the player and give him a proper send-off with fans.

The blame game shifted significantly in that press conference: Laporta said he respected the La Liga ‘financial fair play’ roster rules, and while they were ultimately the reason Messi could not sign, he said it was the previous two club administrations that put the club in financial disarray. Laporta sent the message that if it were not for their mismanagement, Messi’s signing wouldn’t have been an issue. He pointed out how he held up his end of the bargain by reaching an agreement with Messi. It just was not possible to execute it because of La Liga roster budget rules.

The private equity money being poured into La Liga would have helped, but Laporta said Barcelona isn’t interested in taking it. He insisted that the club did not agree with the financial arrangement and specifically, giving up 10 percent of La Liga’s media revenues to the company, CVC Capital Partners, as part of the deal.

“It would not be in Barca’s best interests,” Laporta said. “We were going to receive some money, but we think that accepting it – and affecting ours [revenue from] television rights for the next 50 years – is not something we can do [to keep Messi]. It’s too risky. The club is above players, coaches and presidents. “

It was Messi’s turn to tell his side of the story, which he did during a tearful press conference held on August 8 in Barcelona:

Messi made it clear during the press conference that he never wanted to leave, but that it is now inevitable that he would play for a direct competitor of Barcelona’s in the UEFA Champions League because he wants to keep winning trophies. He said several clubs had contacted him, including Paris Saint-Germain, but he stopped short of confirming the news of his signing with PSG.

“I am really sad because I did not want to leave. This is the club I love,” he said. “I did not expect this. I have never lied. I have always been honest and upfront. Last year I wanted to leave, this year I did not. That’s why I am so sad.

“As the president [Joan Laporta] has explained, the club has debt [problems]. It’s not possible. Why keep drawing it out if it’s nearly impossible? The talks stopped since Barca did not want to go on. They knew La Liga would not let it happen, it was impossible.

“I did not want to leave, but I have to. And I want to keep winning. That’s my mentality. I want to win.”

Messi left Barcelona fans with a few hopeful lines about the future:

“My family and I were convinced we were going to stay, that’s what we wanted more than anything. We are at home here,” he said. “Now I have to say goodbye to all of this. I have been here since I was 13. After 21 years, I am leaving with my wife, with my three little Catalan-Argentine kids. I can not say that we won ‘ t come back in some way because this is our home and I promised my children we would.

“Barca are one of the best teams in the world, they have an amazing side,” he continued. “More players will come, not just now but in the future. Players come and go. As Laporta said, no one person comes before the club. At first, it will be weird, but people will get used to it.”