Eduardo Camavinga influenced every goal that Real Madrid scored in the Champions League knockout stages but that was not by shooting.

It was due to everything that he did before the goals. The teenage prospect is a game-changer for the same exact reasons that makes him a valuable midfielder: a skill set of elite ball-winning and dribbling.

He carries the ball like smoke floating through the air: it’s smooth and silky. Blink and you’ll miss it. His quick bursts aren’t reserved for attacking transitions. He also utilises them to get within the vicinity of opposition dribblers to close them down.

And don’t let his age fool you – the 19-year-old’s physicality ensures that he is, most times, too big, too fast and too accurate for his opponent.

He is everything, everywhere, all at once – and often an opponent’s perfect storm. More specifically, the perfect storm that has helped Real Madrid get to Saturday’s Champions League final against Liverpool in Paris.

Against Paris Saint-Germain in the last 16, Camavinga came on the 57th minute of the second leg at the Bernabeu with Madrid trailing by a goal (and by two on aggregate) but the game was eventually won with Madrid scoring three times.

Against Chelsea in the quarter-finals, Camavinga came in the 73rd minute of the second leg with Madrid two goals behind (but level on aggregate). His team lost on the night but scored two goals (that of course, he was involved in), which was enough to advance to the semi-finals on aggregate.

And in the second leg of the semi-finals, against Manchester City, Camavinga delivered his ultimate blow, coming on in the 75th minute with Madrid a goal down (two down on aggregate). The game ended with Madrid having scored three times, and yes, Camavinga was involved with all of them (even Karim Benzema’s extra-time penalty).

Camavinga shone in different ways each game, but what exactly is he? Is he really the super-sub… that’s a midfielder?

Camavinga was on the pitch for just 33 minutes against PSG in March, but he was the straw that broke the camel’s back. His influence was not typified by a flashy goal or a through ball to Benzema – it was something much simpler than that: Camavinga controlled the midfield.

He featured in the double pivot in Carlo Ancelotti’s 4-3-3 system alongside Federico Valverde, freeing Luka Modric further forward. And although he sprayed excellent passes from deeper areas during build-up play, it was his aggression and ground coverage that interrupted PSG’s tune.

These are qualities that do not show up by looking at what Camavinga did on the ball but are all the more important. He was a presence. A presence just enough to bring balance to Madrid’s structure and enough to “let people do their own thing”, so to speak.

In this snapshot mere minutes before Benzema’s second goal, Madrid are out of possession in their own half, with Neymar on the ball. 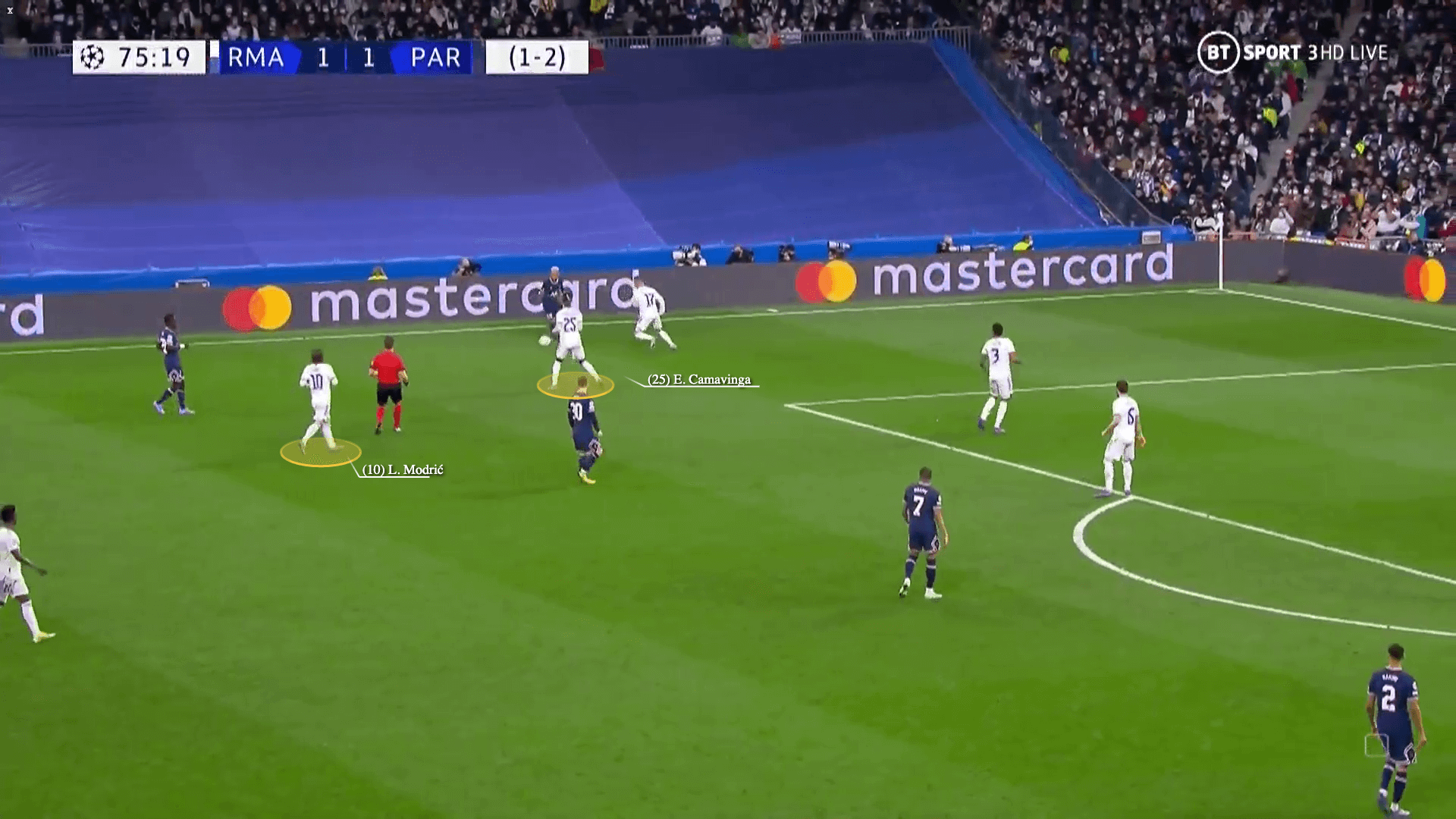 Camavinga does not intervene during this entire sequence but, simply by where he positions himself, he has an impact on how the events unfold.

Preventing Neymar from cutting inside, he supports Lucas Vazquez in closing the PSG forward down and cutting off a passing lane to Lionel Messi. 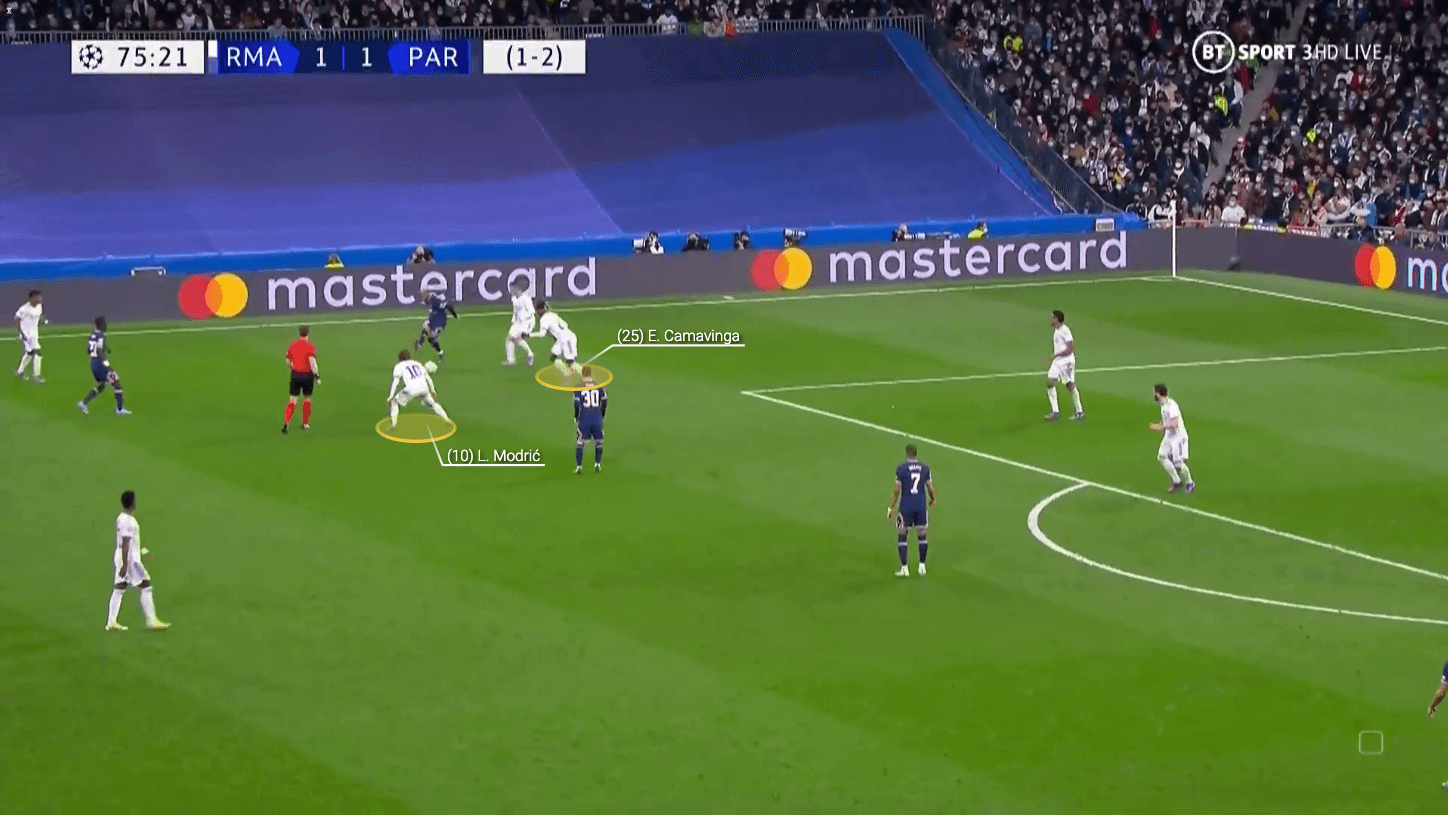 It forces Neymar into making an error that eventually leads to Modric recovering the ball and kickstarting the Madrid counter-attack that ends in the hosts taking a 2-1 lead on the night.

More often than not, actions in football that do not need intervention (good positioning off the ball) have a greater, quieter impact. At the tender age of 19, Camavinga already has a good understanding of where to situate himself best to support his team-mates.

He is smart in the way in which he utilises his body, ready in an angled stance to shift in tandem with the ball.

He did that for the entire time he was on the pitch.

To say that Madrid were having a difficult game, finding themselves 3-0 down at the Bernabeu against Chelsea in April and trailing 4-3 on aggregate, would be an understatement.

But, as Madrid often do in the Champions league, they got over the line, somehow. That “somehow” was largely Camavinga. Again, it was his relentless energy and, more importantly, his presence that made the difference.

A few moments before Rodrygo’s goal, Chelsea intercept the ball from a promising Madrid attack. Camavinga is quick and intense to the counter-press, chasing Mason Mount on the ball… 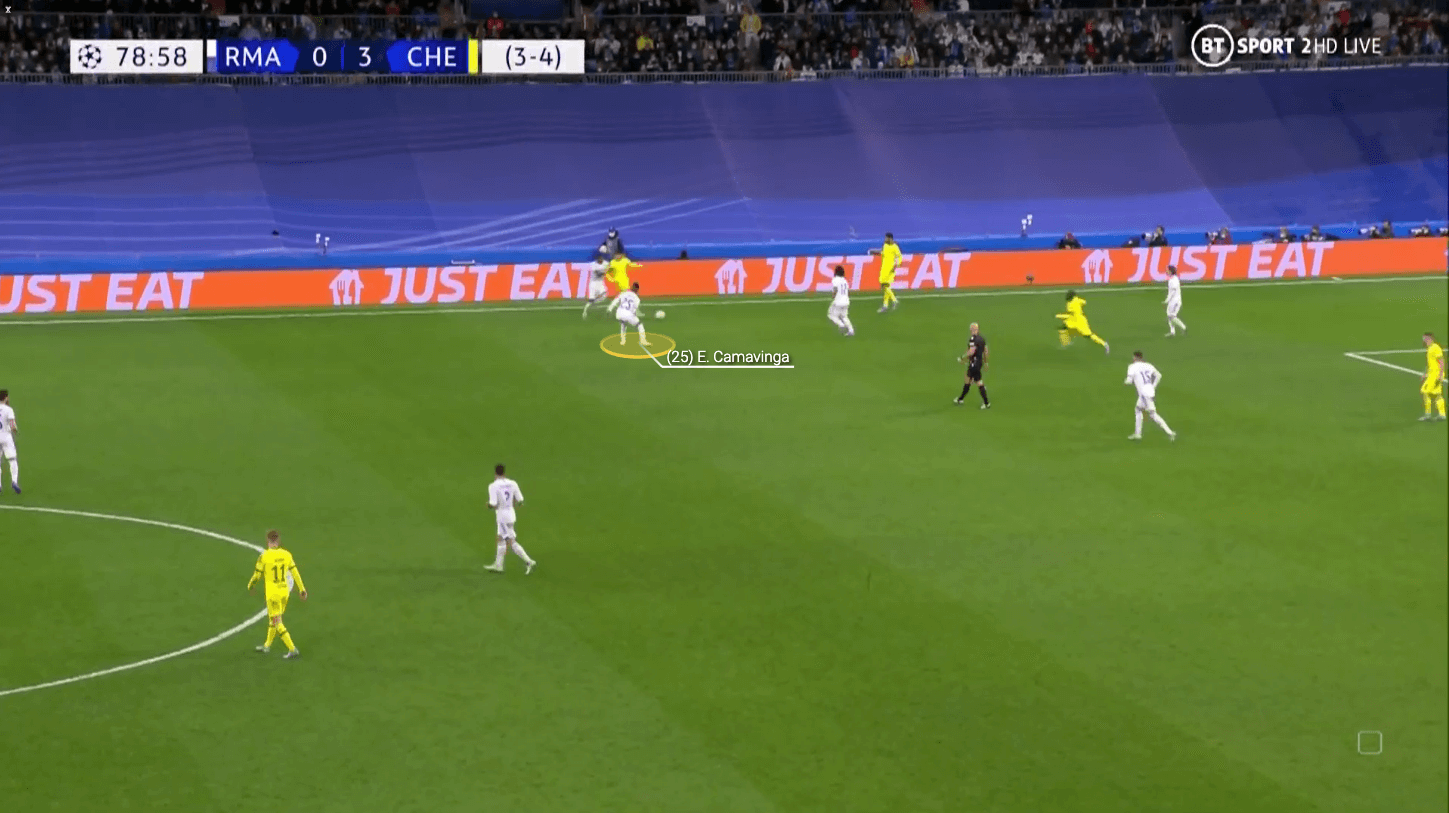 Quickly before quickly (two seconds later, to be exact) shutting down N’Golo Kante… 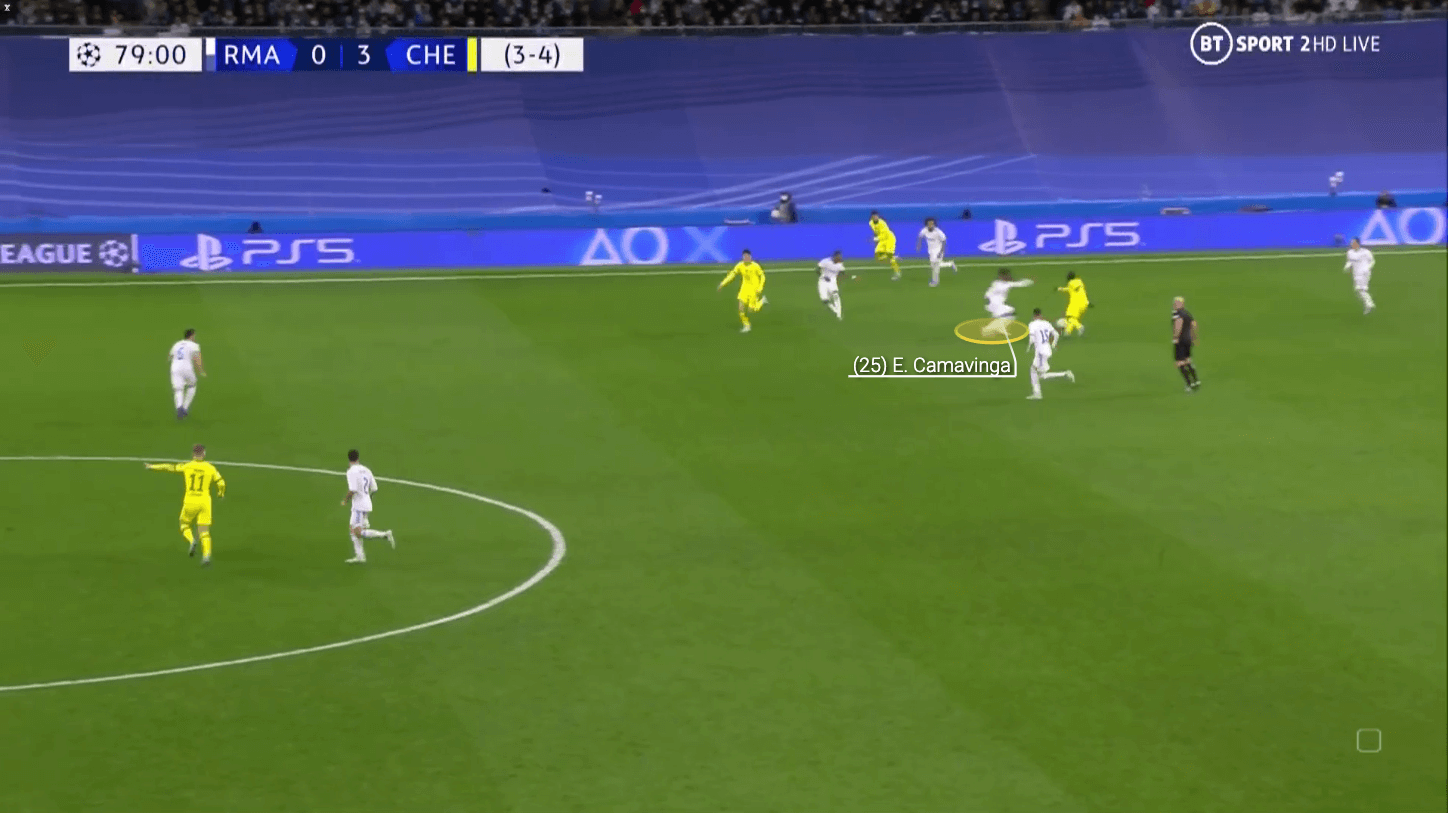 … Forcing his more experienced French colleague into an improbable long ball and the exact sequence that leads to Madrid recovering possession, countering and scoring. 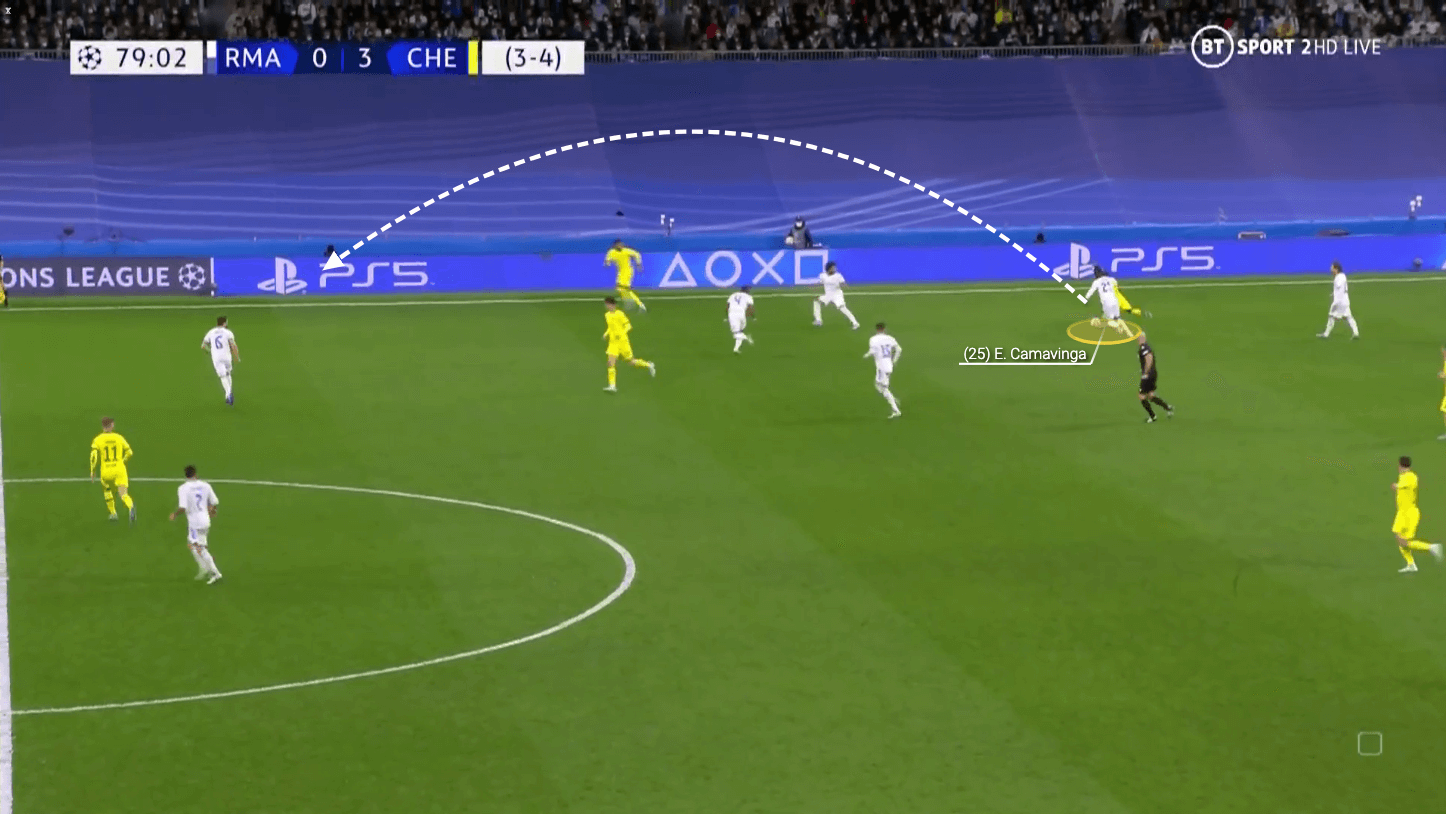 Camavinga’s best quality comes in his movement and to bind him to one position is to lock a bird in its cage. He thrives best with the freedom to roam, especially out of possession. 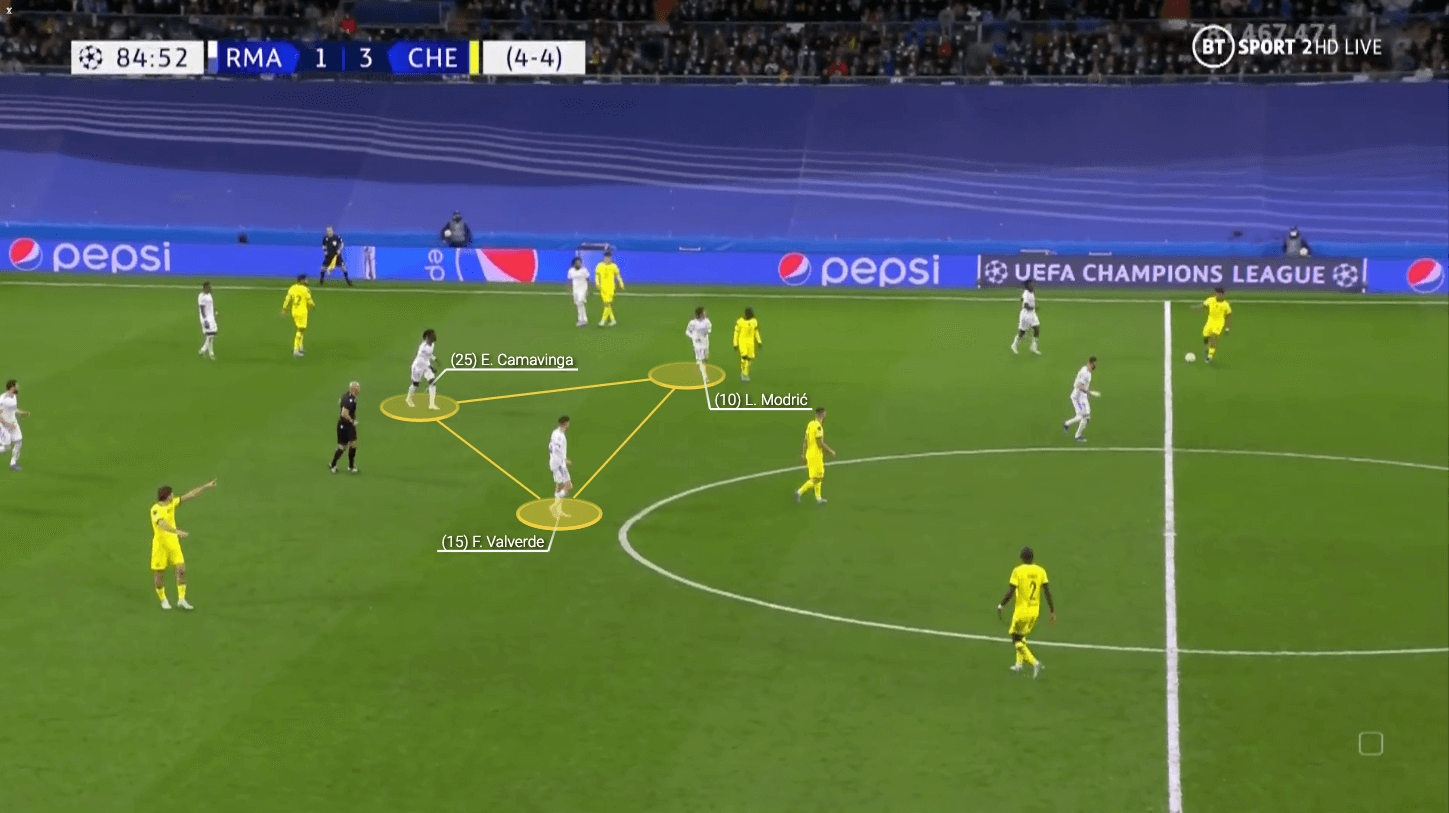 Place him as a lone No 6 and his tendency to vacate his deeper position to chase the ball might prove costly. Support him in midfield and Camavinga becomes an excellent (and regular) winner of the ball, especially higher up the pitch. 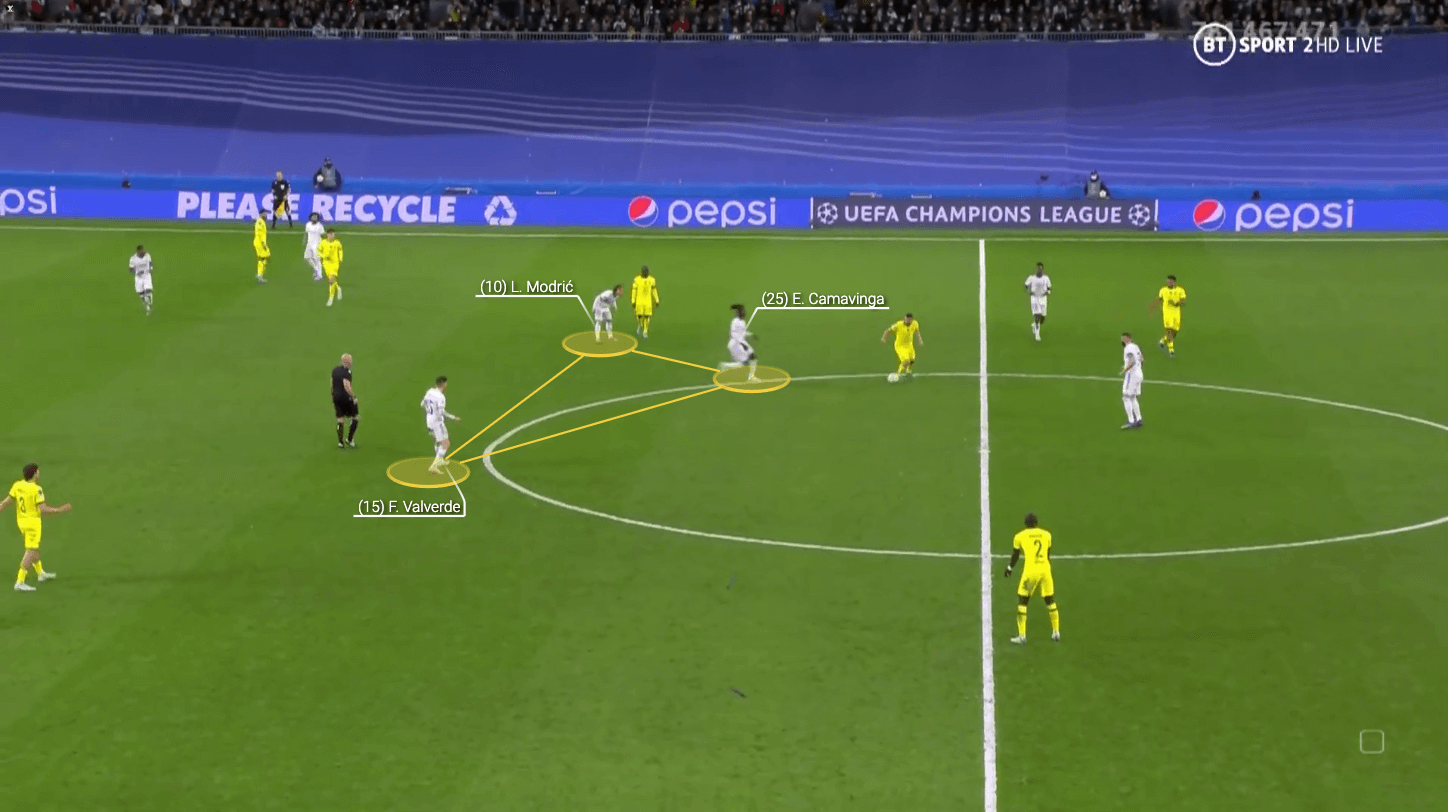 Here’s Camavinga capitalizing on a misplaced pass from Thiago Silva… 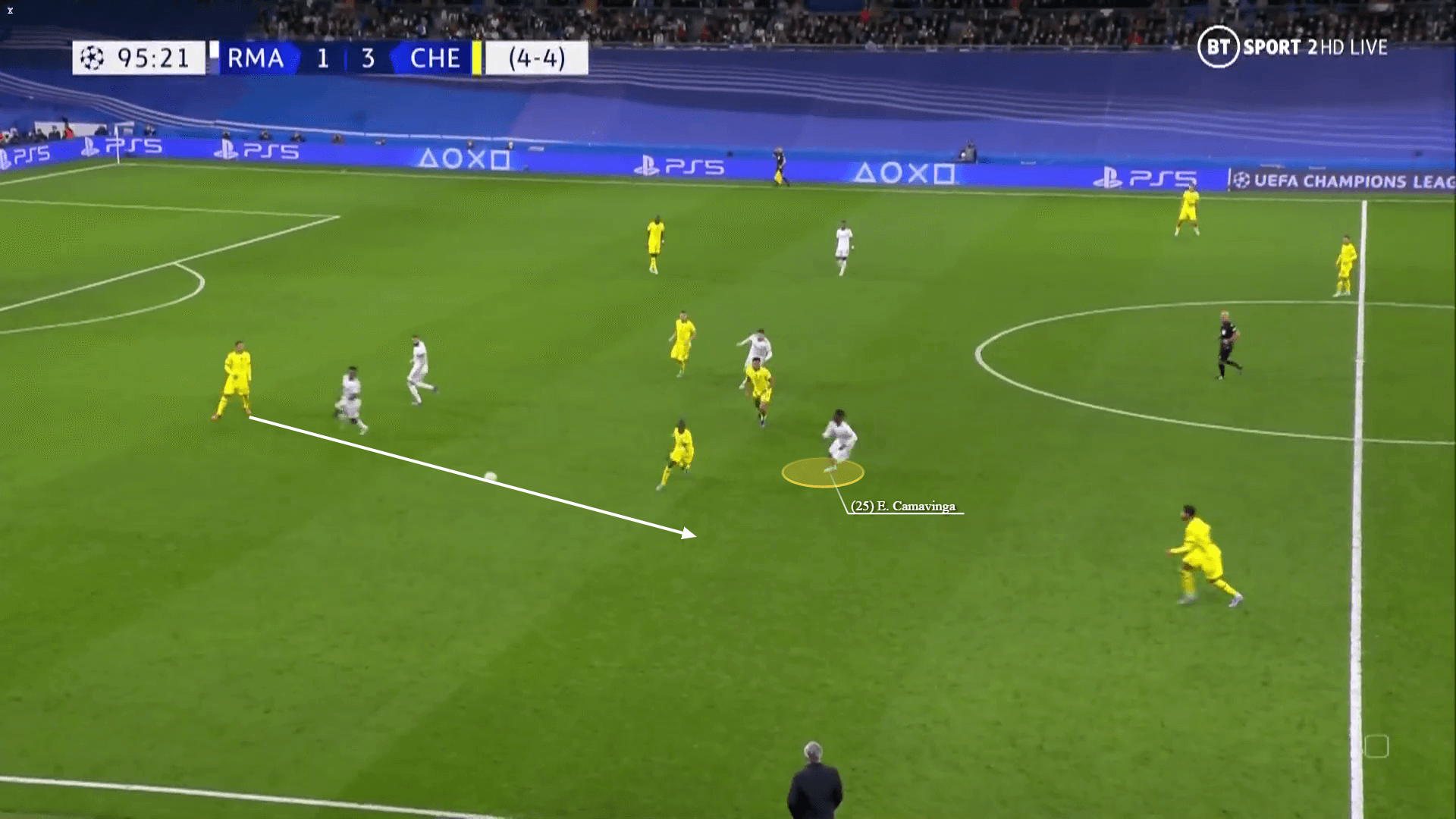 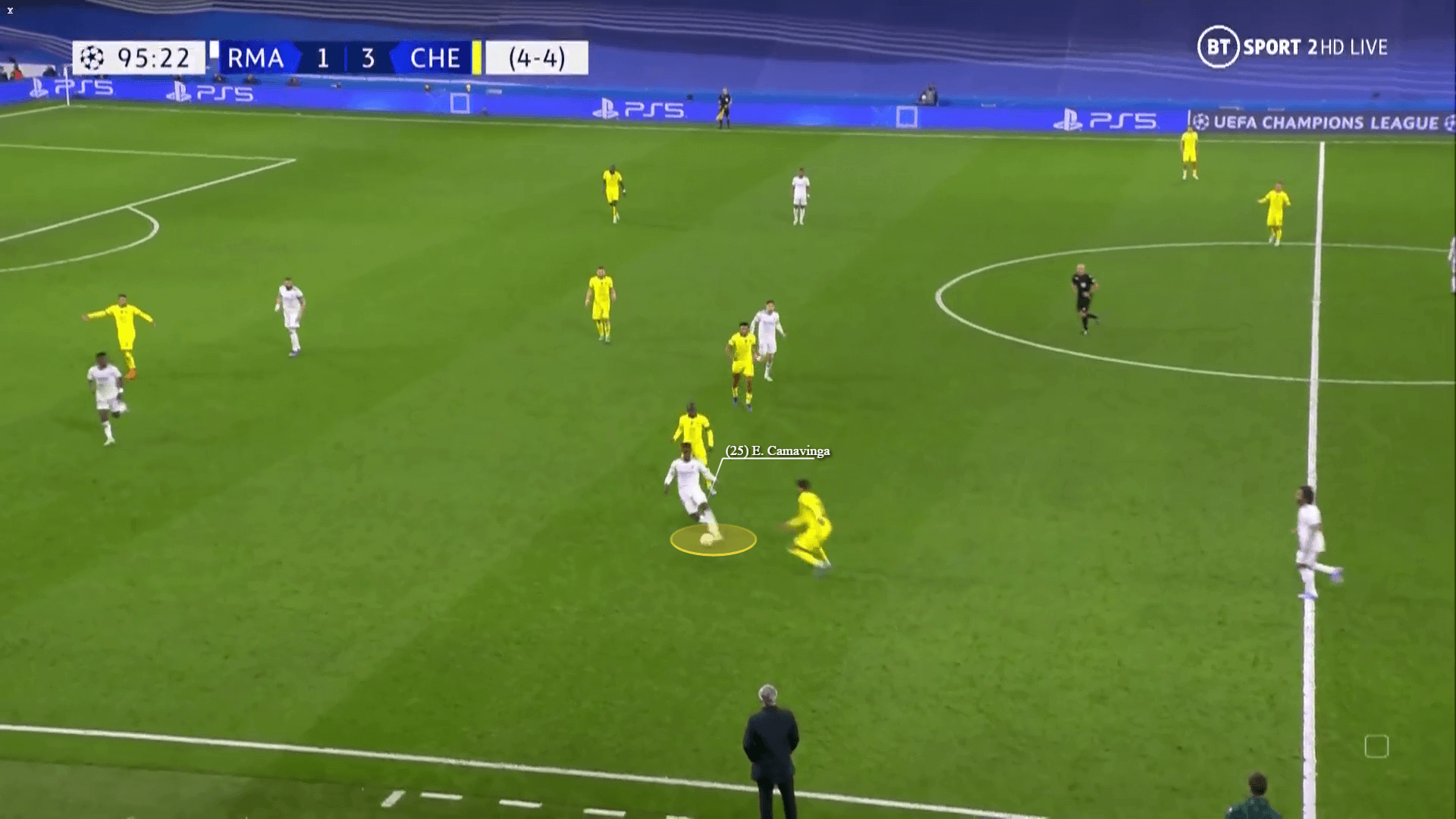 … While taking a bigger touch than one might expect in tight situations, reeling in the opposition to engage, and using his quick feet to push the ball away before playing a through ball to isolate Vinicius Junior on the left wing. 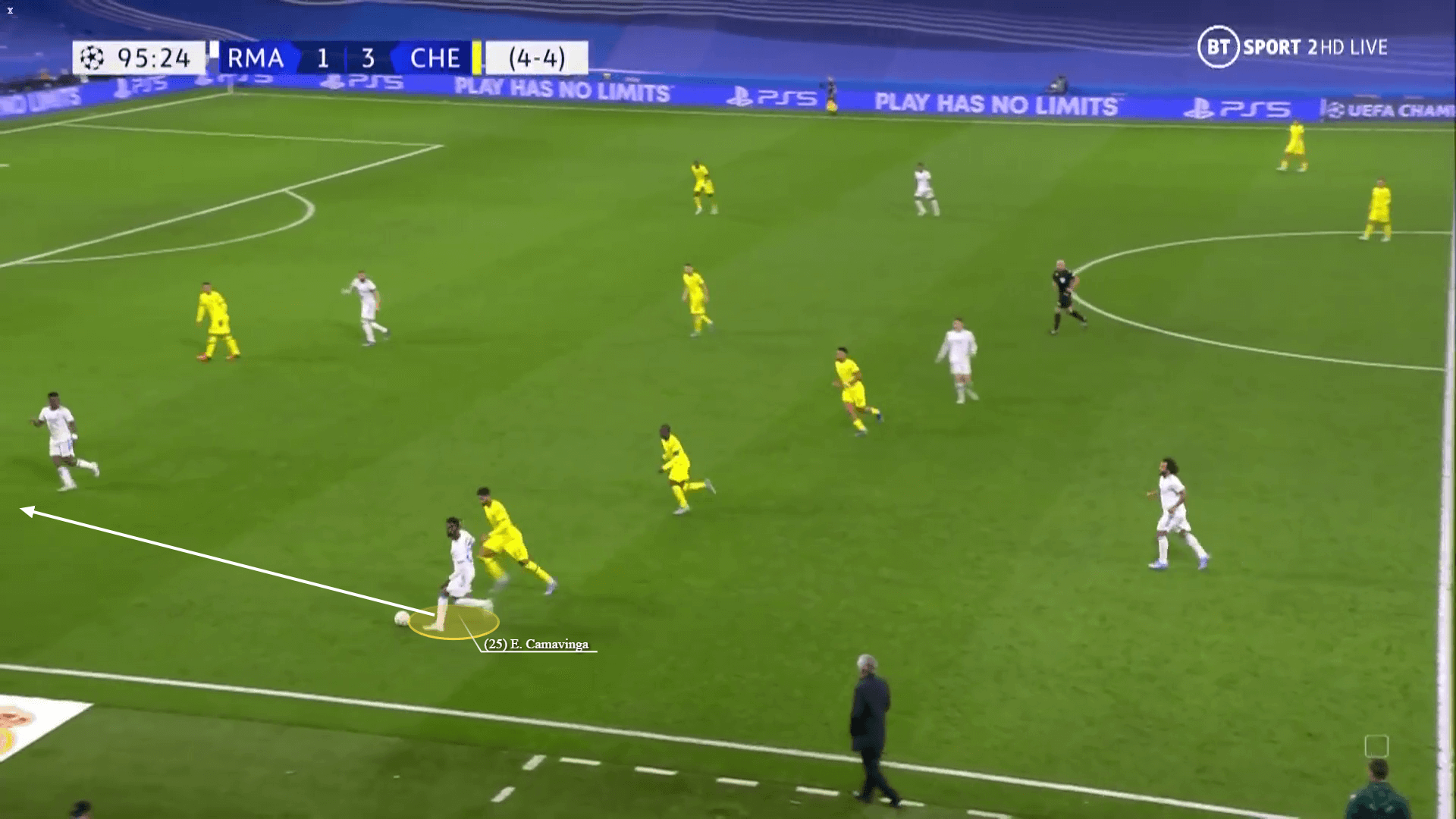 The quick changes of direction that allow him to steal the ball from opponents are also what make him explosive while carrying it. Its quality is clear both defensively and offensively.

When Madrid dramatically overcame Manchester City at the Bernabeu to book their place in Saturday’s final, Camavinga was unplayable the moment he was brought on.

Out of all three second-leg knockout-stage matches, this was the game that encapsulated Camavinga’s ability as a midfielder.

Camavinga’s excellence as a ball-winner is just one string to his bow. His cross to Benzema led to the first goal, scored by Rodrygo, he won the ball back to initiate the attack for the second that sent the game into extra time, and he was involved in the move that lead to his match match-winning penalty , feeding Rodrygo whose cross led to Ruben Dias fouling Benzema in the area.

Camavinga’s passing repertoire as a midfielder mostly features spreading play with short passes towards the wings, a characteristic that some would say makes him look conservative on the ball – but that takes away from his crisp passing in build-up.

Here, Camavinga is positioned in the central area of ​​the pitch, providing a passing lane for Madrid’s back line.

Prior to receiving the ball, the Frenchman takes quick glances to his left and right, aware of City’s press looking to close him down… 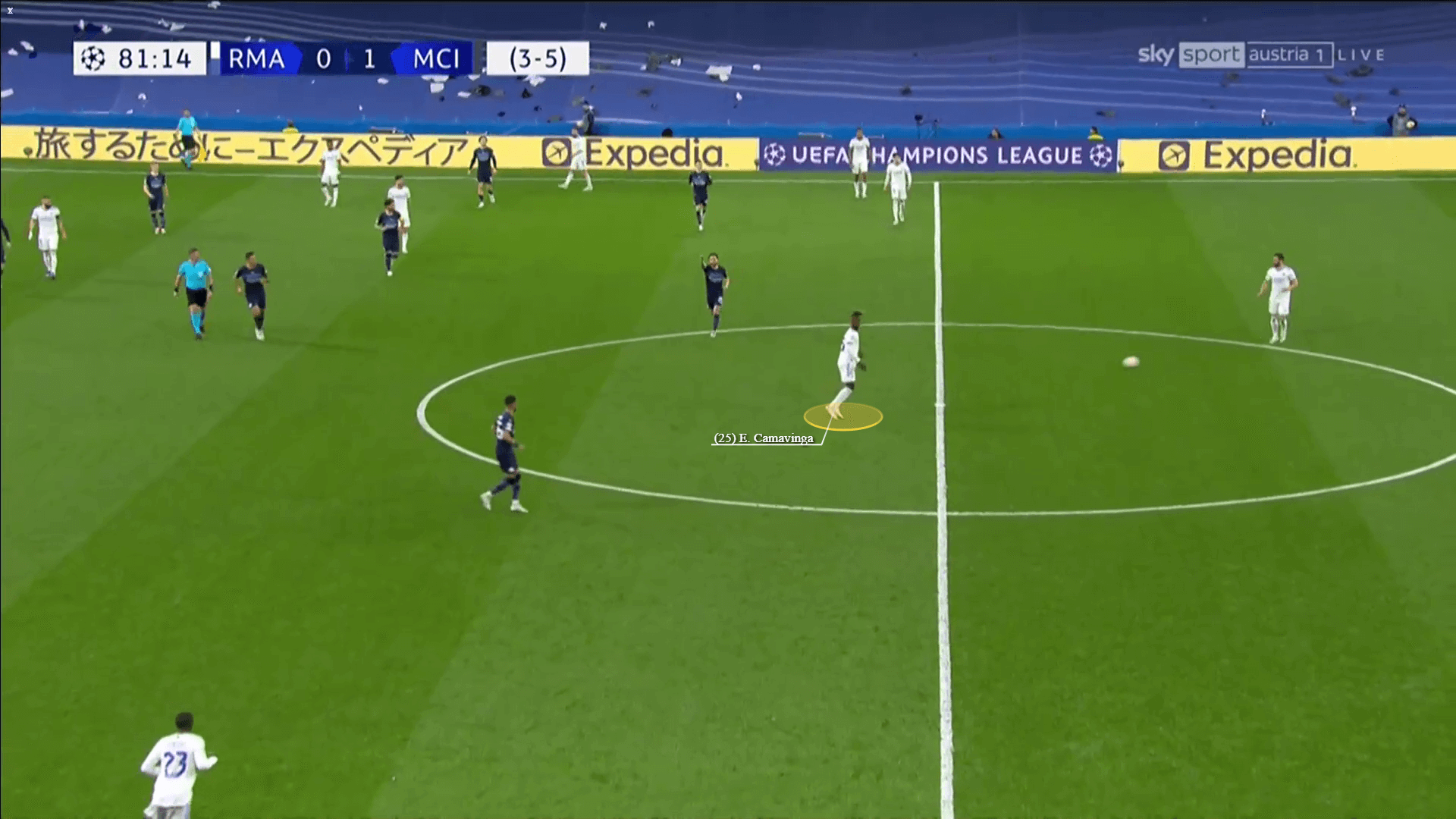 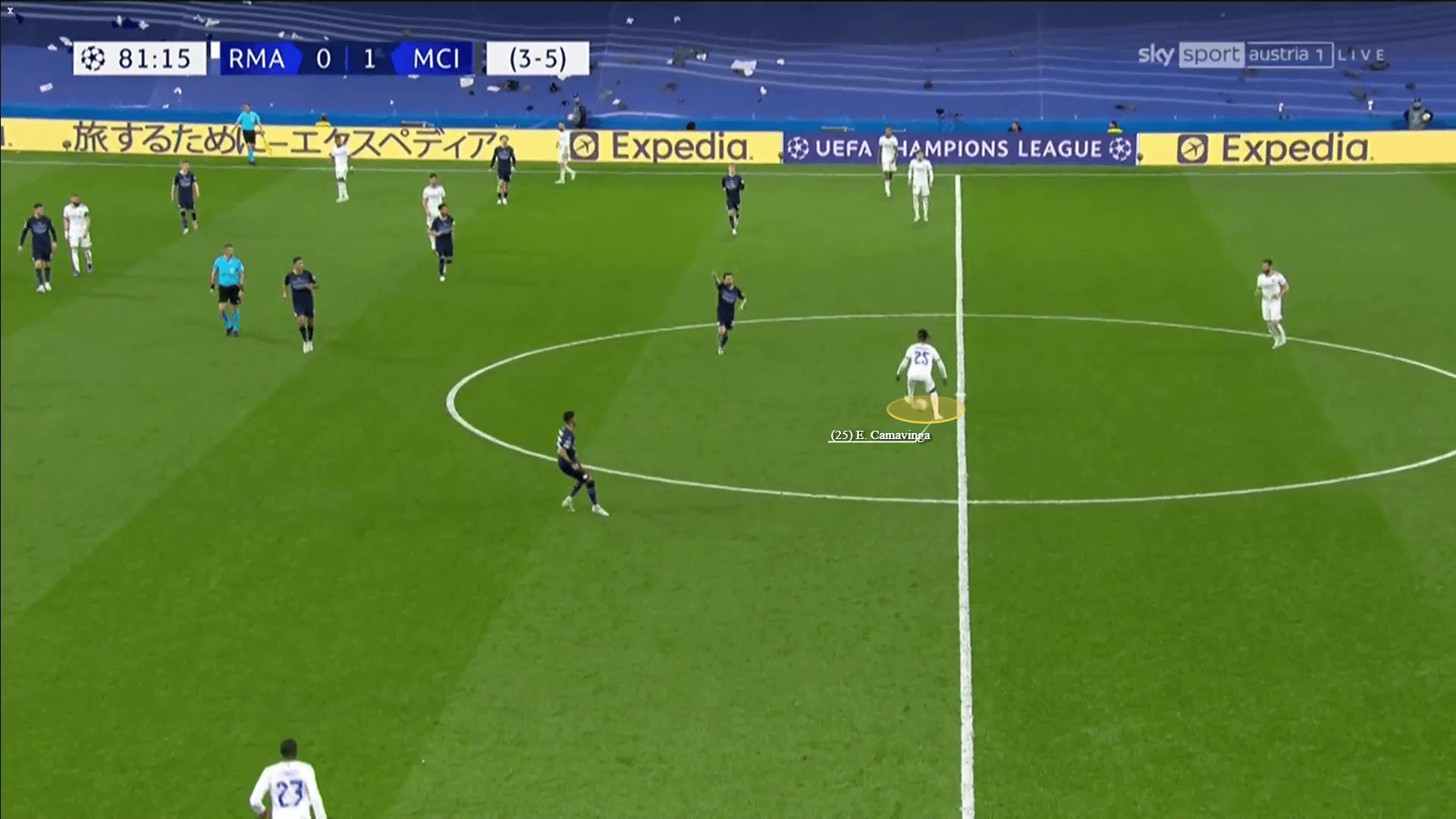 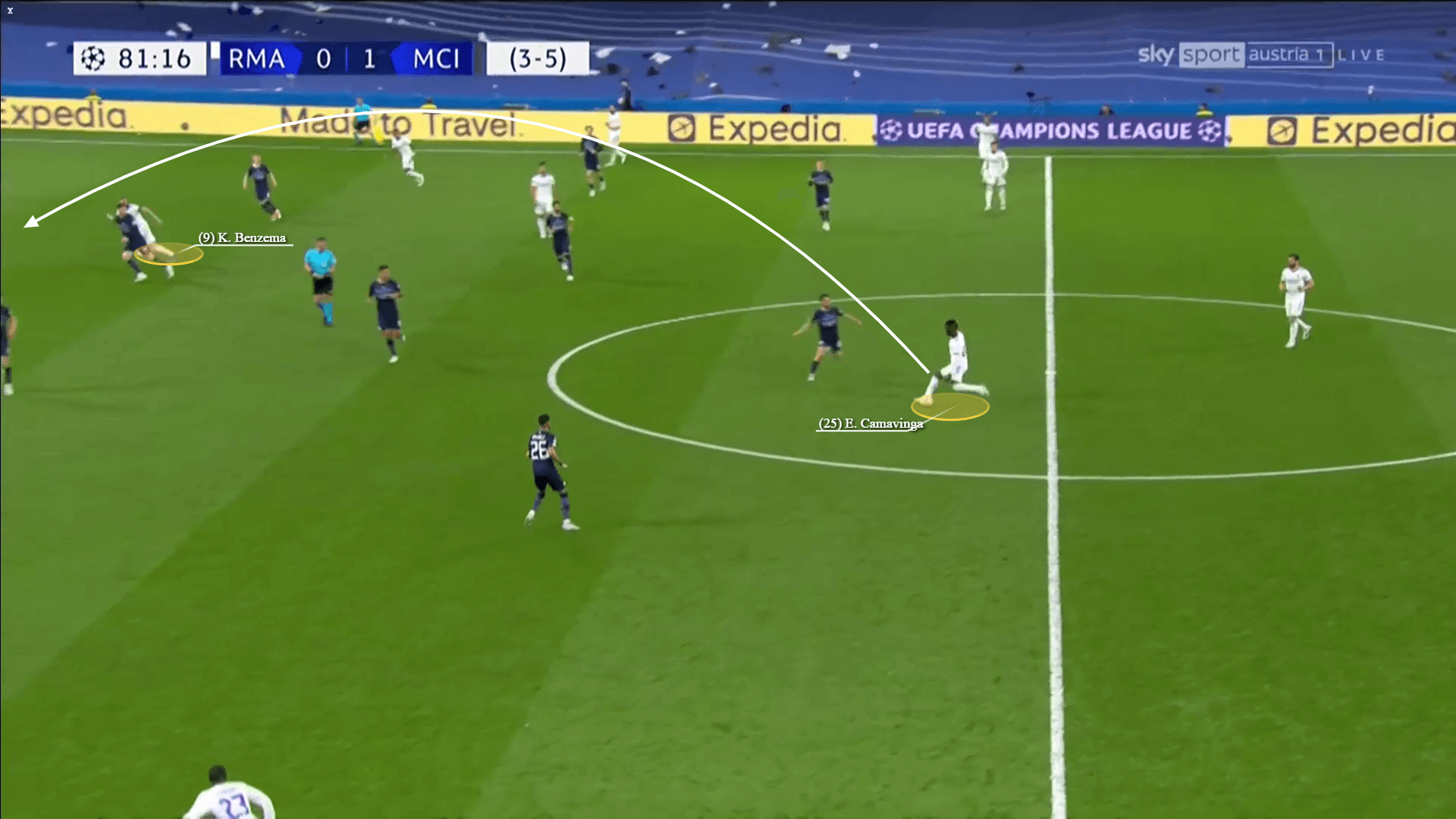 … Leading to a shooting opportunity for Madrid. 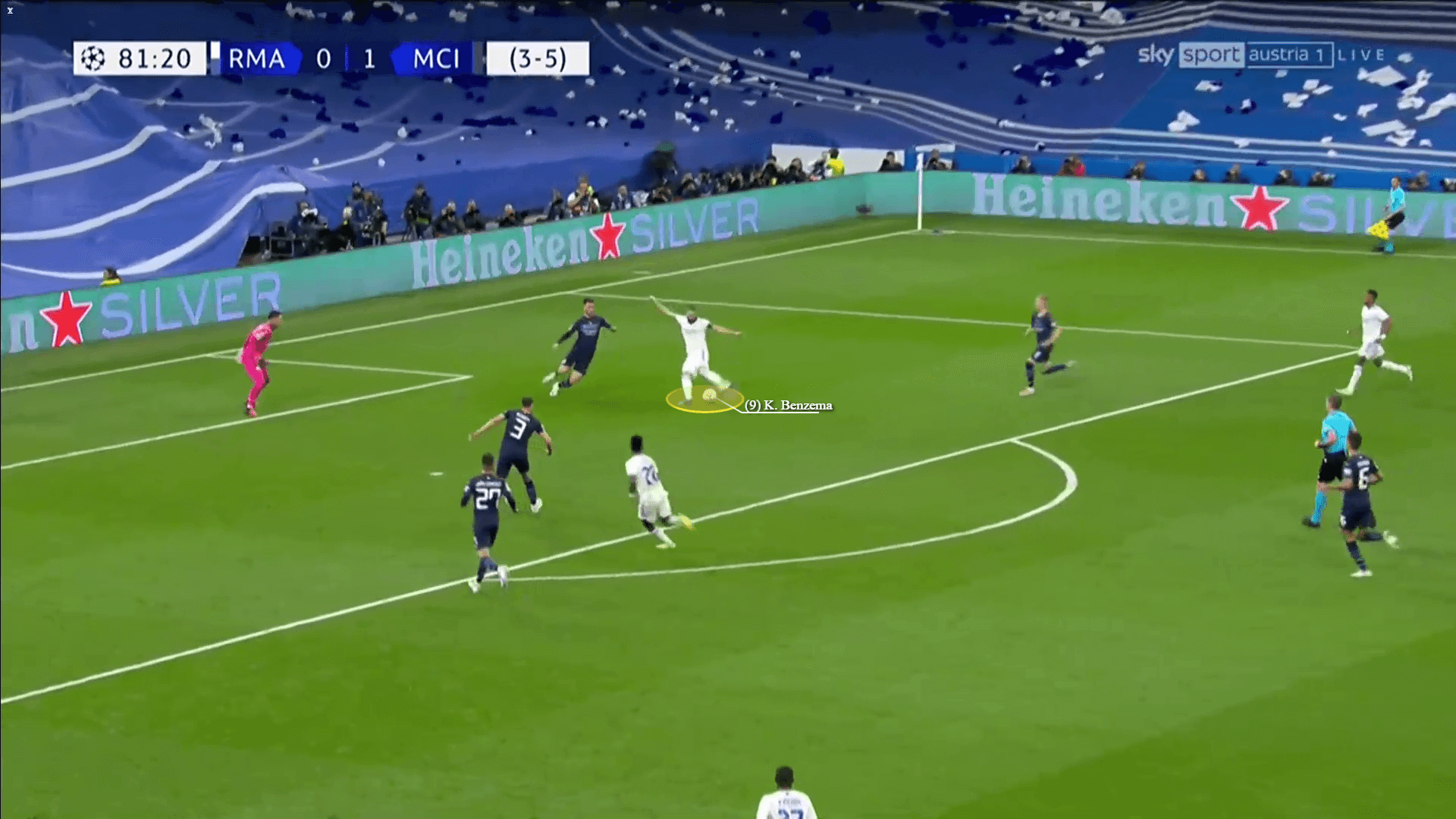 While Camavinga would benefit from being more adventurous in his pass selection, his long-range passing is effective. It allows Madrid to transition to what they are best at – tricky and quick attacks.

Pushing Camavinga further forward, just outside of the box, is where he thrives.

A similar sequence can be seen with how Madrid scored their opener of the evening, with the teenager supplying Benzema’s run with a lofted pass to the far side of the area – the striker then knocked the ball back into the danger zone for Rodrygo to score. 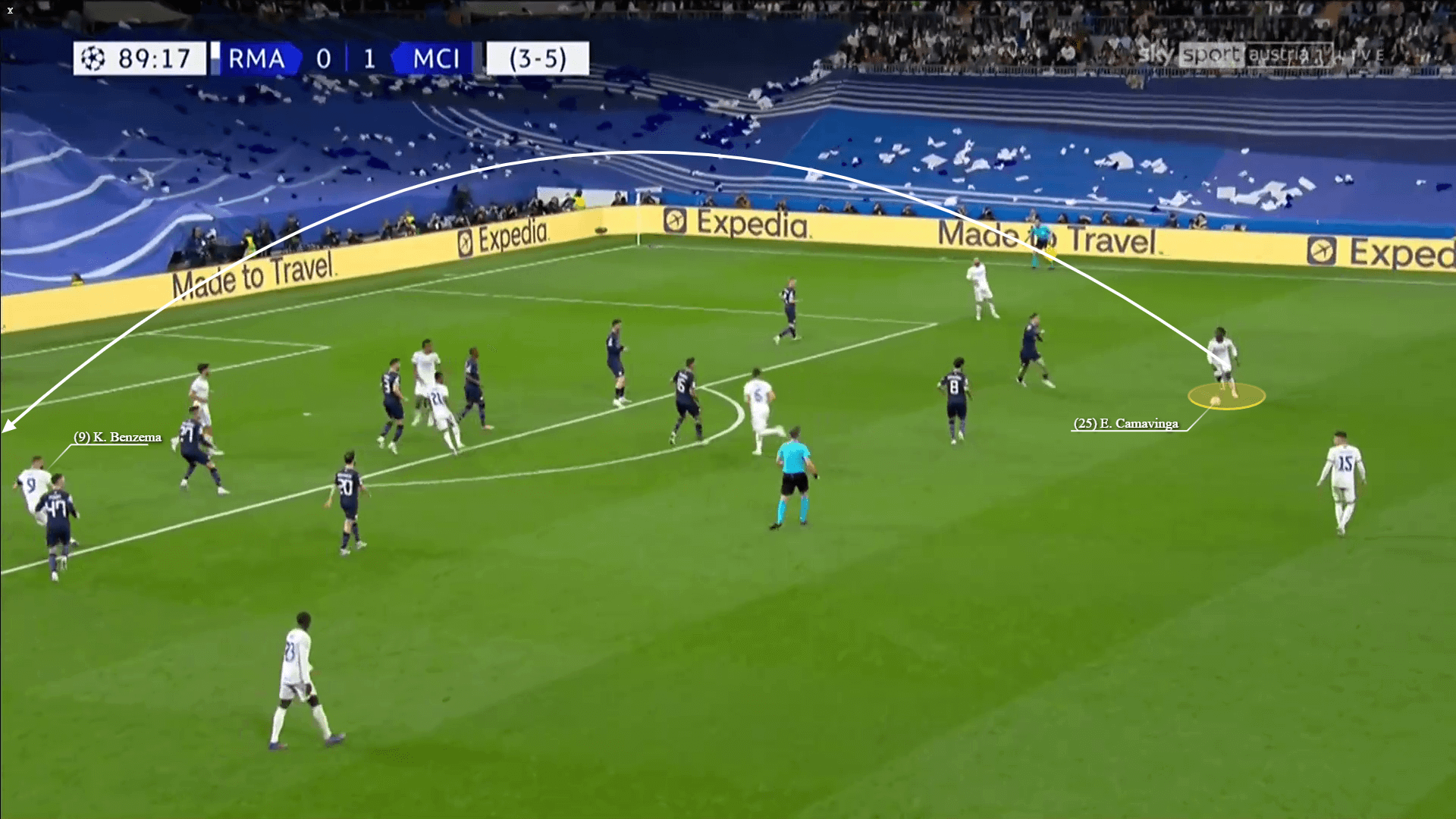 Camavinga’s tendency to move the ball as quickly, combined with his ability to switch play or penetrate the opposition from deeper areas, was the spark to Madrid’s comeback.

Yet it isn’t all about his passing.

His best quality on the ball comes to the fore when he carries it. Camavinga is always looking to capitalize on space and, with his close control and quick bursts, he can regularly glide past opponents with the ease of a winger.

How Madrid won their penalty showcases this exactly, with Camavinga shuttling across the turf to offer himself as an option and to feed others ahead of him. 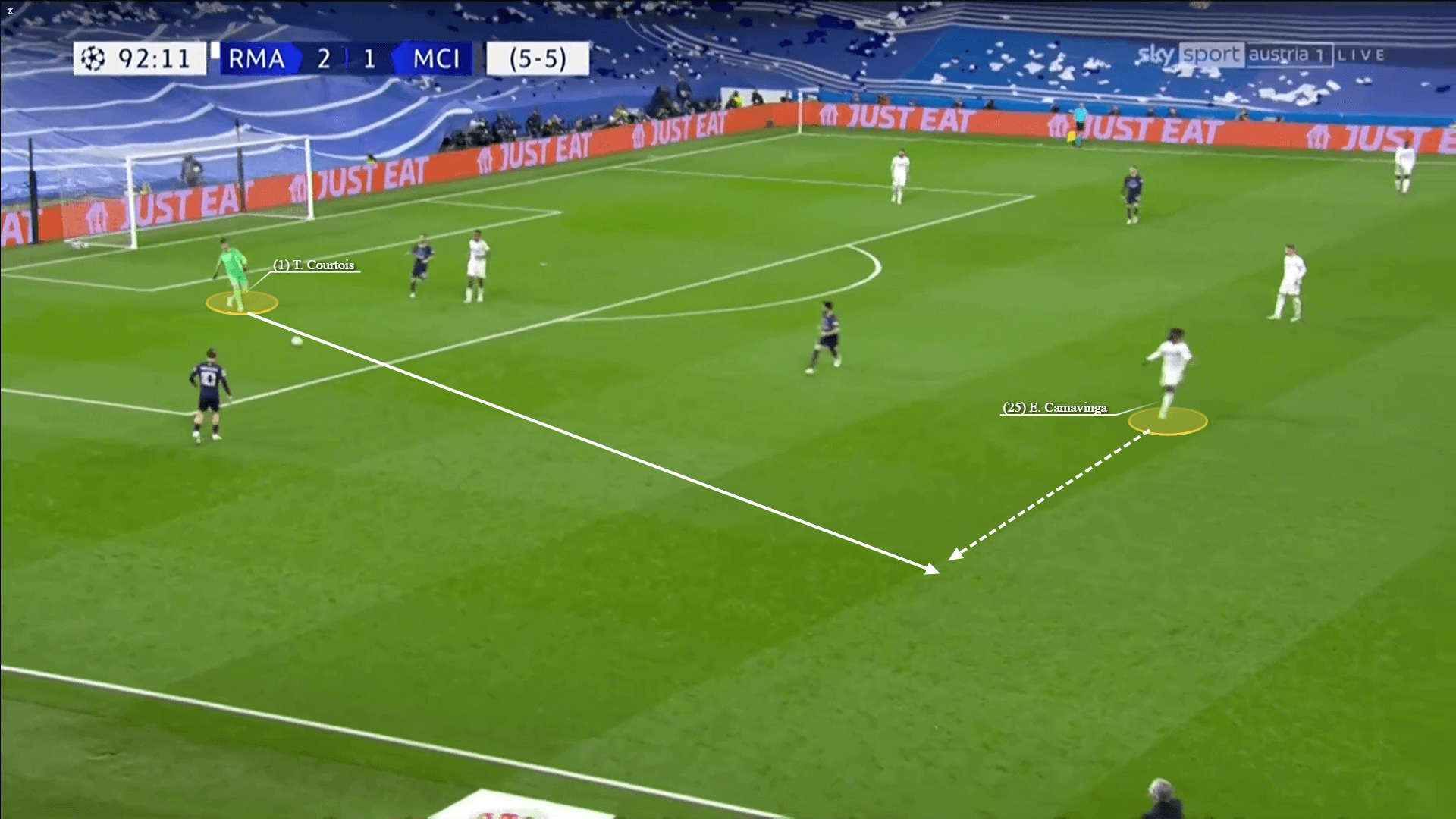 … And where a typical midfielder, especially at his age, would look to circulate it to another player, Camavinga recognizes the space for him to attack. 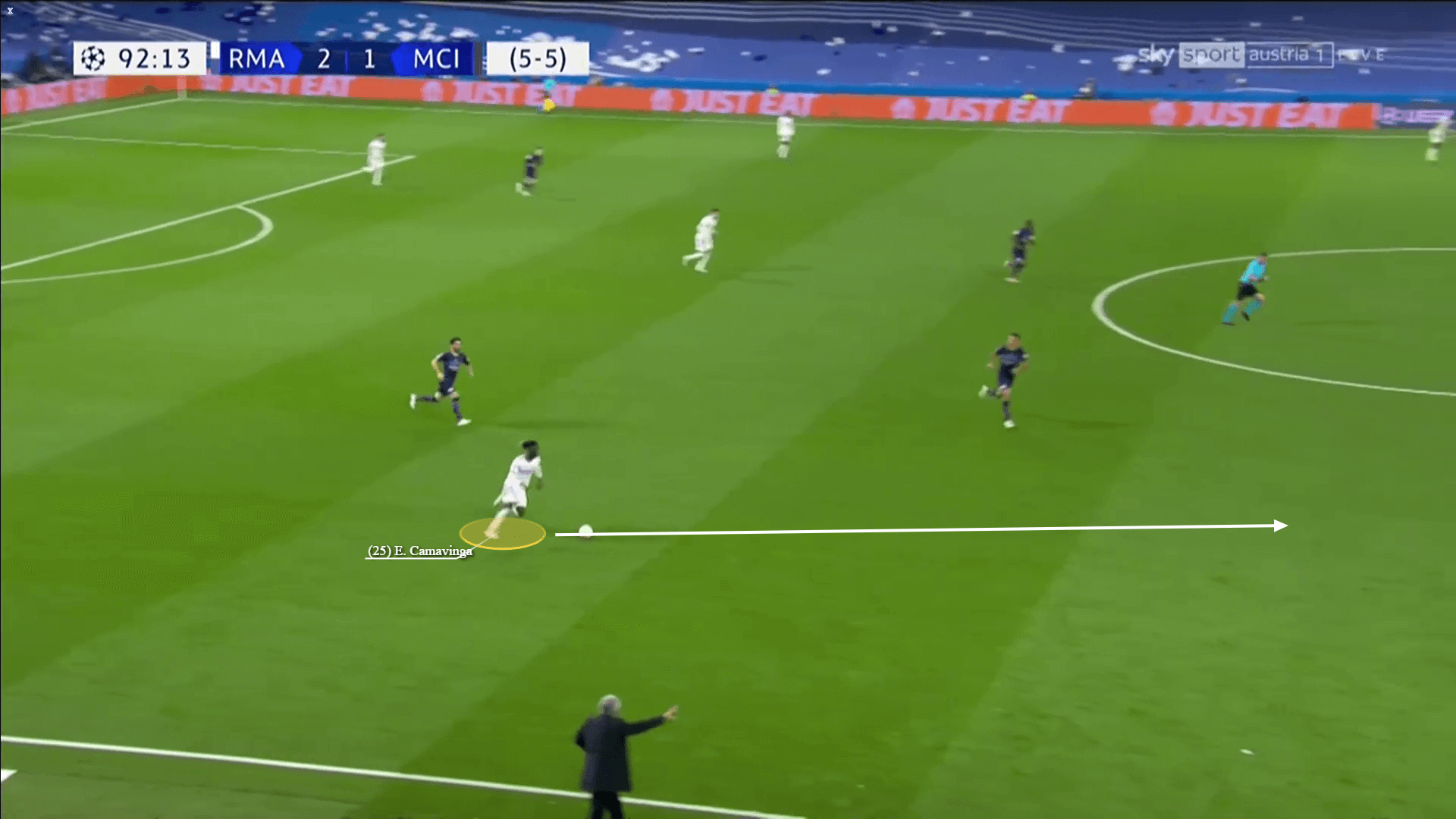 He strides all the way to Manchester City’s final third, and then lays it off into the path of Rodrygo’s overlapping run. 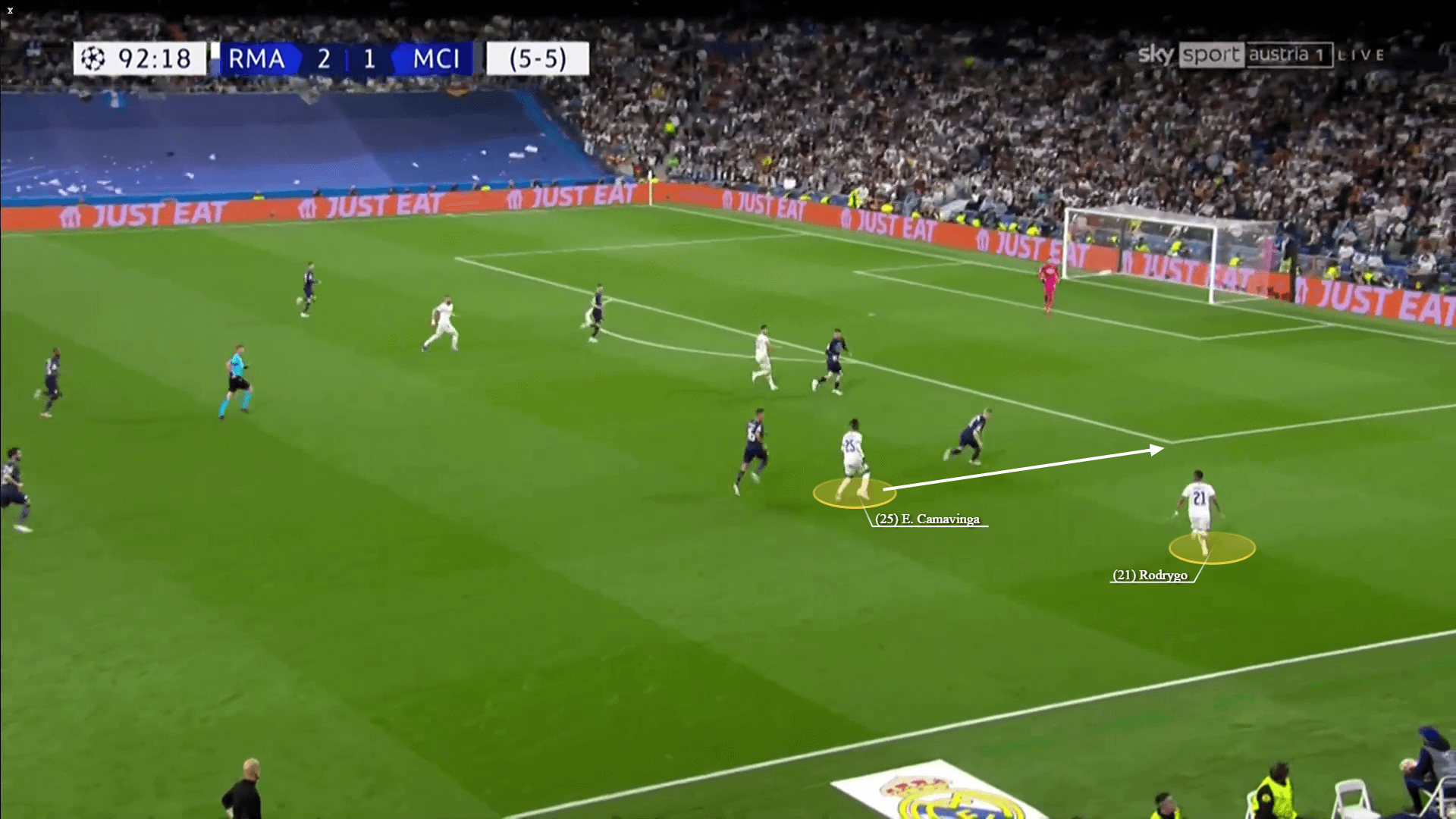 How Camavinga was able to turn the tide time and time again for Madrid perfectly epitomises him as a midfielder: strong in the challenge, a good eye for a pass and silky on the ball.

But it was also the perfect environment for him to thrive as a midfielder that is usually two moves ahead of anyone else on the pitch facing fatigued opponents; one that can take advantage of the chaos. An explosiveness and forward-thinking instinct that midfielders spend years perfecting is already this young midfielder’s foundation.

With experience that time will bring, Camavinga will improve on the “boring” traits of the game like scanning the pitch or selecting the best passing option. He will only get better from here, especially in an advanced role where he is able to break lines in the middle third, break through the final third with quick bursts, and supply Benzema, Vinicius or Rodrygo.

Do not mistake his dynamism as arbitrary, as the patterns in which he moves the ball are recurrent but unstoppable all the same. We might see them in Saturday’s final.

If he’s introduced from the bench, Liverpool will need to find a way to prevent him from driving Madrid forward.