When Sevilla’s top-performing players are the subject of transfer talk it means they have had another successful season, and for a club that has won the Europa League four times in the past eight years, that tends to be a regular occurrence.

Bryan Gil, Wissam Ben Yedder, Pablo Sarabia, Quincy Promes, Luis Muriel and Clement Lenglet have all left for big transfer fees in recent years and Diego Carlos looks set to be next after Aston Villa agreed a deal believed to be worth £ 26 million to sign the imposing Brazilian center-back.

With the experienced and savvy Monchi as sporting director, Sevilla are confident in their ability to trade bigger names, move on players and be able to replace them without losing a competitive edge.

A new cycle of talent has developed over the last three seasons as the Andalusian club look to challenge the Madrid clubs and Barcelona. The bedrock to their regular top-four finishes has been a stern defense built largely on a foundation formed in France but with the news of Villa’s deal for Diego Carlos, that defense is beginning to splinter.

In the summer of 2019, Sevilla signed Jules Kounde from Bordeaux and the somewhat unknown Diego Carlos from Nantes. With the two players complementing each other well in the heart of their defense, Sevilla conceded fewer goals than any other team in La Liga in 2021-22.

A second-place finish looked on the cards until an end-of-season wobble that included dropped points against lowly Mallorca and Cadiz. In the end, they had to settle for fourth and now, like in so many other previous summers, the vultures are circling and Sevilla are ready to cash in.

Kounde, who is a wanted man and has been top of Chelsea’s wishlist for some time, has an € 80 million release clause inserted into his contract. Before the summer transfer window has even opened, Sevilla have agreed terms with Villa for the transfer of Diego Carlos, who attracted serious interest from Newcastle United in January.

But what are Villa getting from the 29-year-old who was born in Sao Paulo, joined Estoril in 2014 and failed to make an impact at Porto, before making a real breakthrough at Nantes?

A detailed way of looking at his profile is to use smarterscout, which gives players’ games a series of ratings from zero and 99, a bit like the player ratings in the FIFA video games but powered by real data and advanced analytics. These ratings relate to either how often a player performs a given stylistic action (for example, volume of shots per touch), or how effective they are at it (for example, how well they progress the ball upfield) compared to others playing in their position.

Diego Carlos’ pizza chart, powered by smarterscout data, shows that the center-back is likely to look after the ball well (ball retention ability, 77 of 99) and keep it simple with its distribution (link-up play volume, 78 of 99), rather than dribbling himself (carry and dribble volume, nine of 99) or playing searching balls upfield (progressive passing, 33 of 99).

Defensively we can see that he is above average in his active defensive work when asked to do so (defending intensity, 62 of 99) but not one to throw himself into a ton of defensive actions (disrupting opposition moves, 49 of 99). However, when he does engage defensively he is effective (defending impact, 85 of 99). 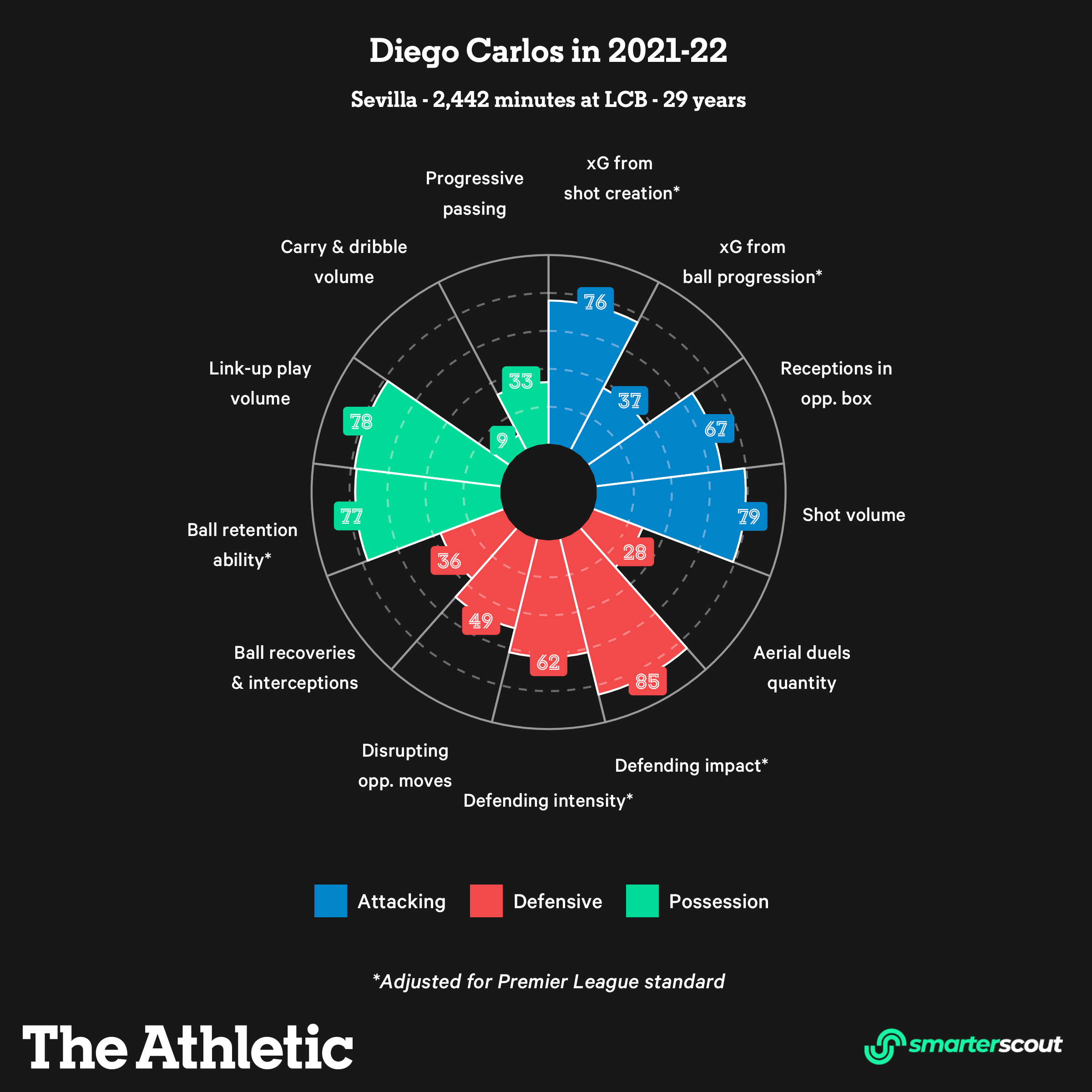 Here’s an example, from Sevilla’s penultimate game of the season against Atletico Madrid, of Diego Carlos stepping out to engage with the opponent.

Look at Sevilla’s defensive line as they prepare to face a set piece. Diego Carlos is on the front foot as Geoffrey Kondogbia plays a firm pass into the feet of Matheus Cunha… 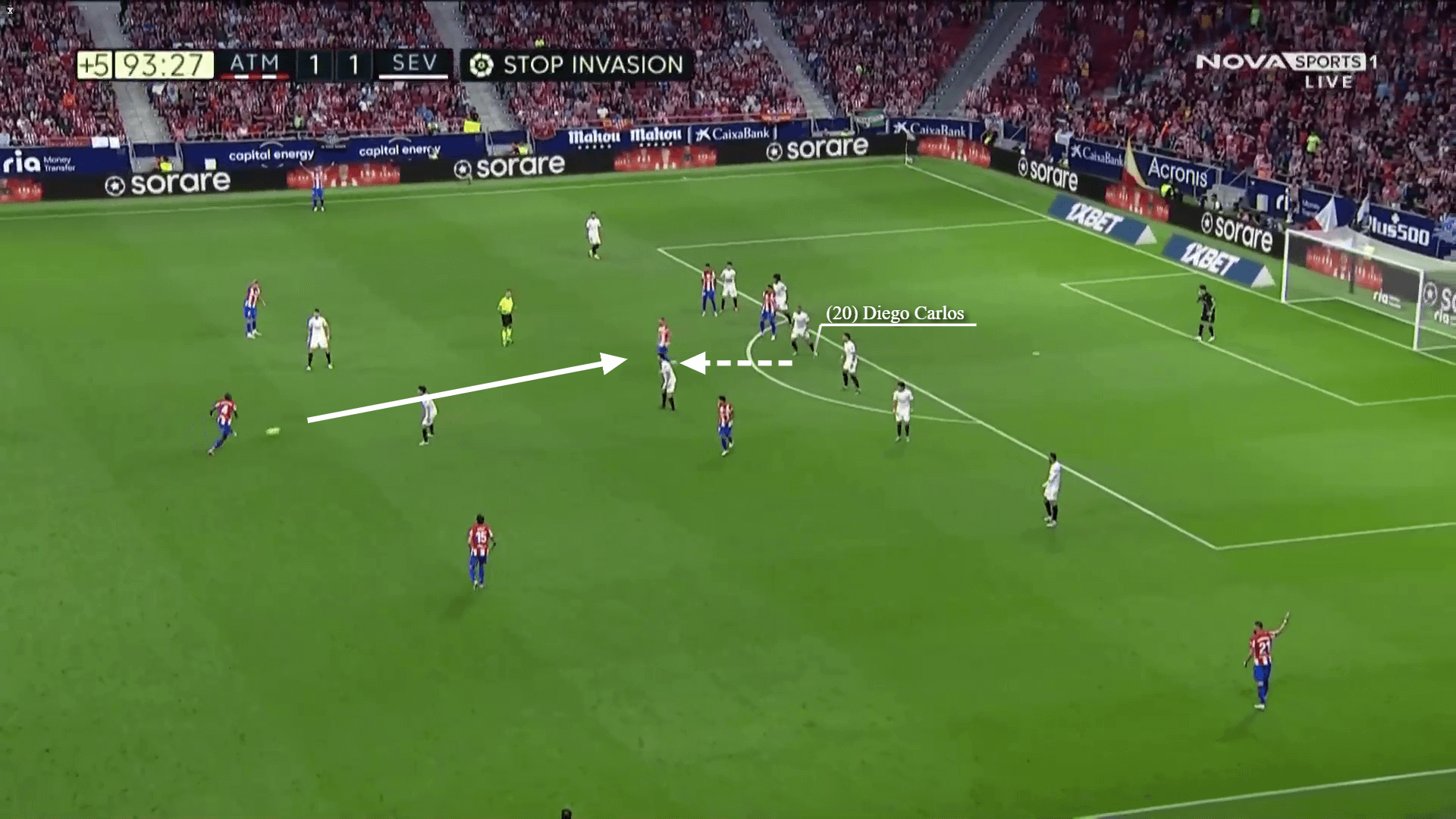 Sevilla’s shape quickly needs to adjust to the different threat and Diego Carlos is the player who takes the initiative, hunting down Cunha in a flash. 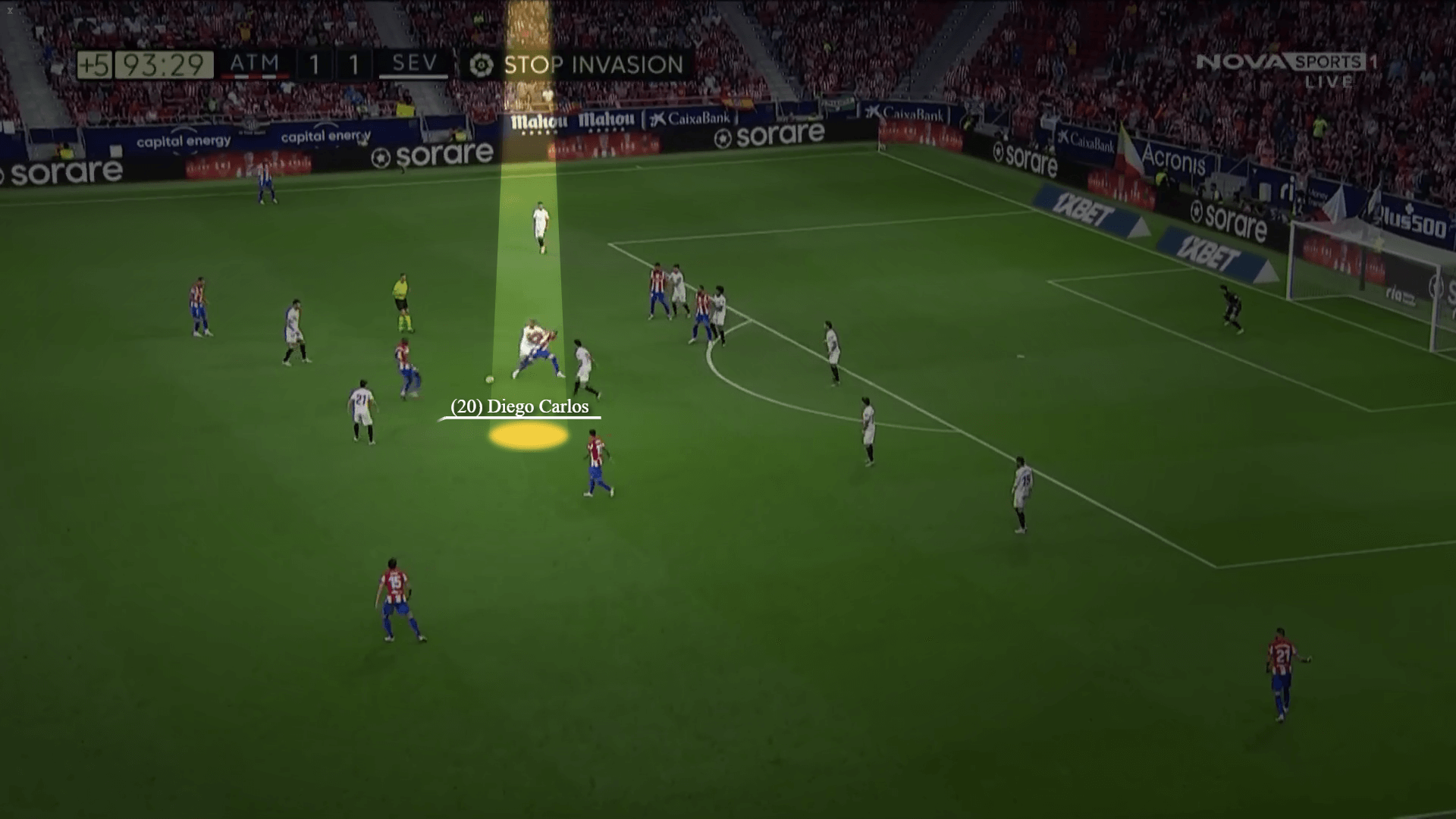 A few years ago, there was a concern that Diego Carlos was too rash and error-prone – he was responsible for giving away three penalties during Sevilla’s run to the Europa League final against Inter Milan in 2020. In that game, he responded with a decisive bicycle kick that was turned into the net, via Inter striker Romelu Lukaku.

Since then, he’s learned to use his strength and aggression positively. Here’s an example from Sevilla’s tense 2-2 draw with Celta Vigo earlier this year.

As you can see, Diego Carlos appears to be stranded as the last man with two attackers racing down on him. 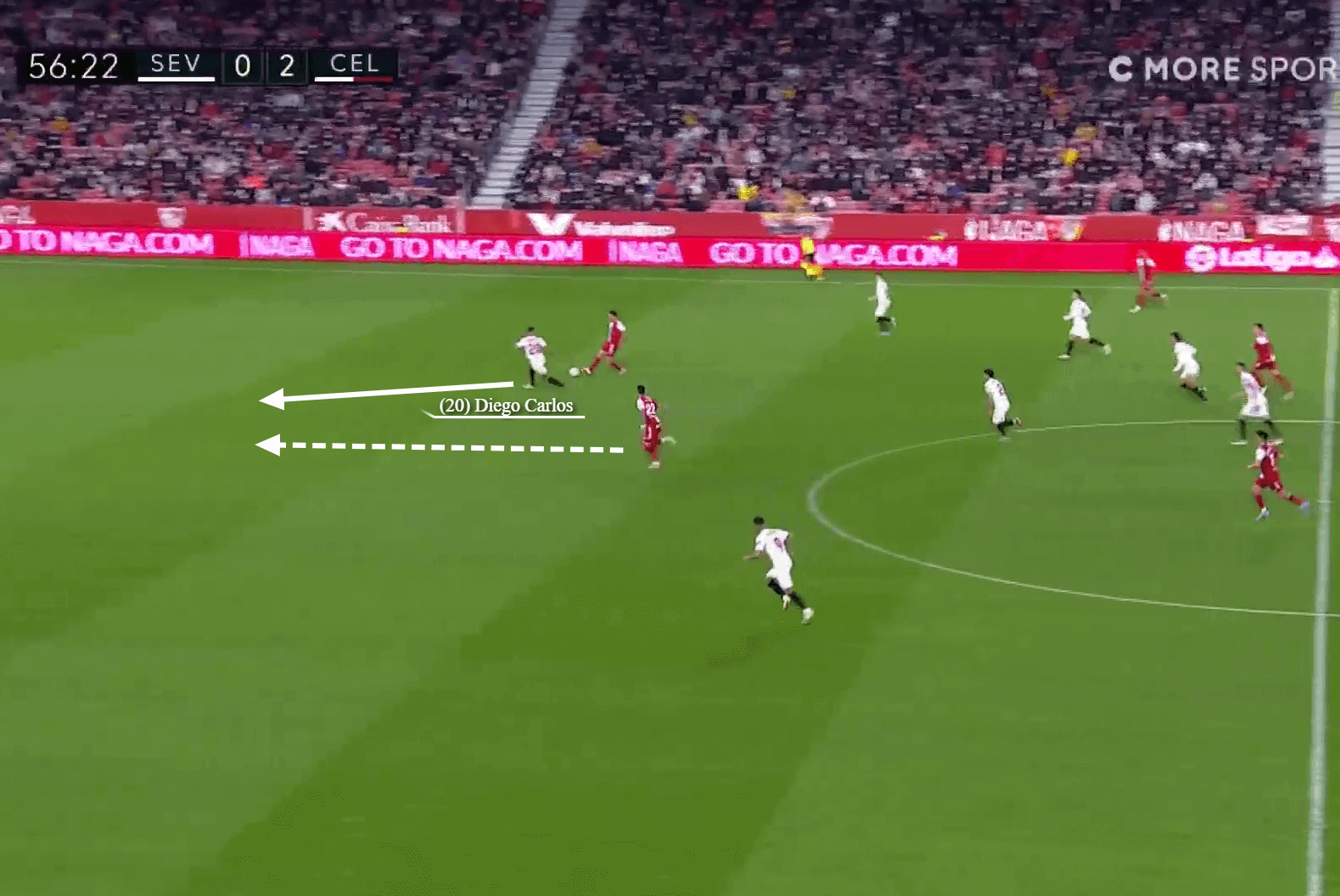 Instead of diving in, he carefully assesses the situation and backs off from the initial attacker. This leaves him enough room to make a sliding recovery tackle when the ball is passed on to the supporting player. 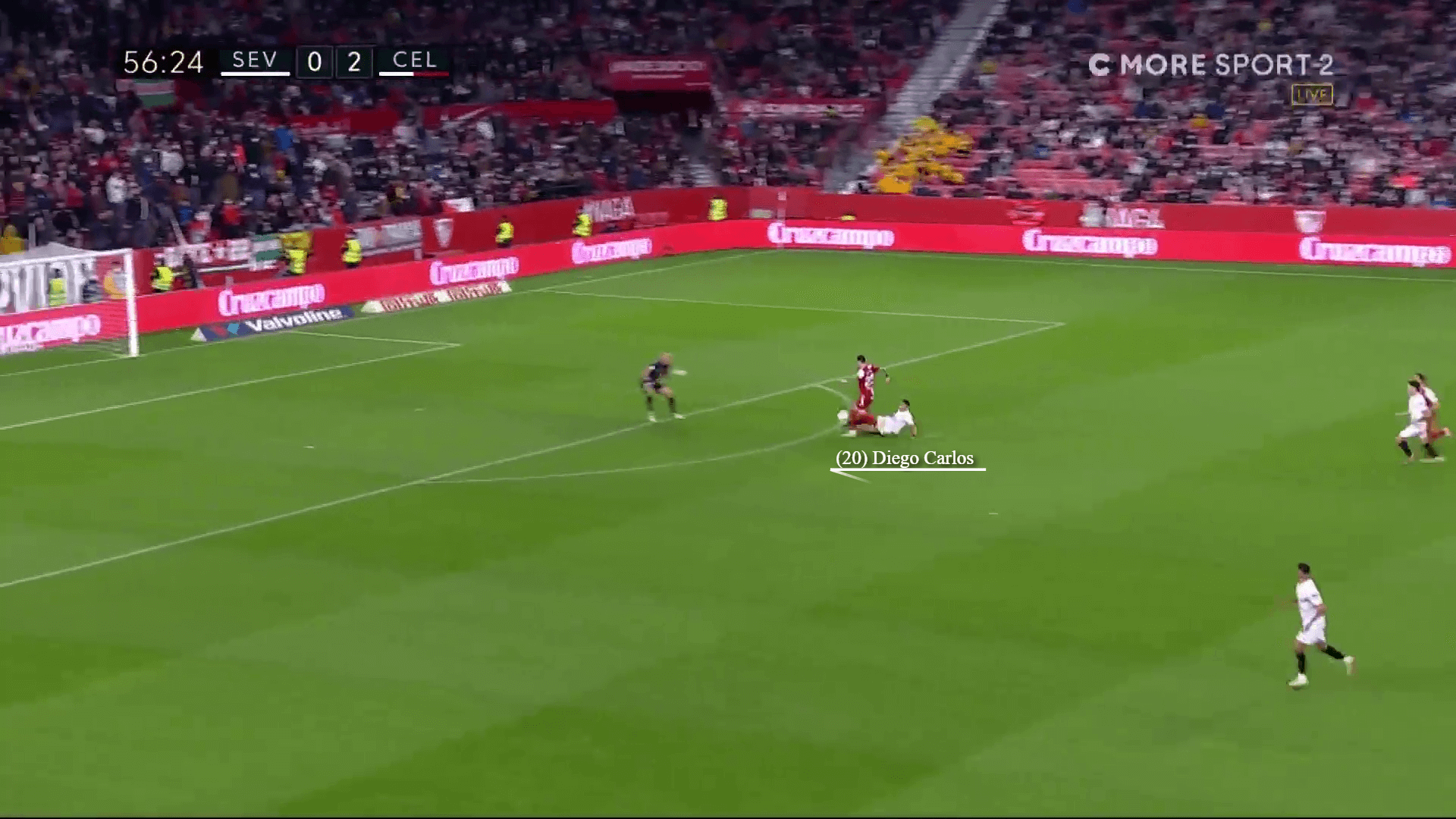 Diego Carlos defends long balls over the top comfortably and uses a mixture of his pace and strength to contain attackers. Unlike the more cultured Kounde, who rarely puts a foot wrong, there has still been the odd error but the good far outweighs the bad.

Sevilla’s best run of form came in the first half of the season when Diego Carlos and Kounde were protected by ex-Manchester City midfielder Fernando, who missed the latter stages of the season through injury.

The club’s former captain Pablo Alfaro said: “Football is often about relationships and associations. Kounde is not so big and physically powerful, but he is very versatile, flexible, athletic, intuitive – these are the best characteristics for today’s football. Diego Carlos has all that strength and will to impose himself on the game.

“Fernando has so much experience and knowledge of the game. Those three form a ‘triangle of security’, which holds up the rest of the team – a strong and solid base that also allows the team to grow on an attacking level. “

Though he prefers to keep it short and simple, Diego Carlos occasionally likes to play searching balls upfield.

The Sevilla goalkeeper Bono tends to offload it short and when looking to play a progressive pass, Diego Carlos seeks the advancing runs of his full-backs or midfielders.

Here’s an example from the home game against Atletico Madrid in December. It’s a searching ball out to the right… 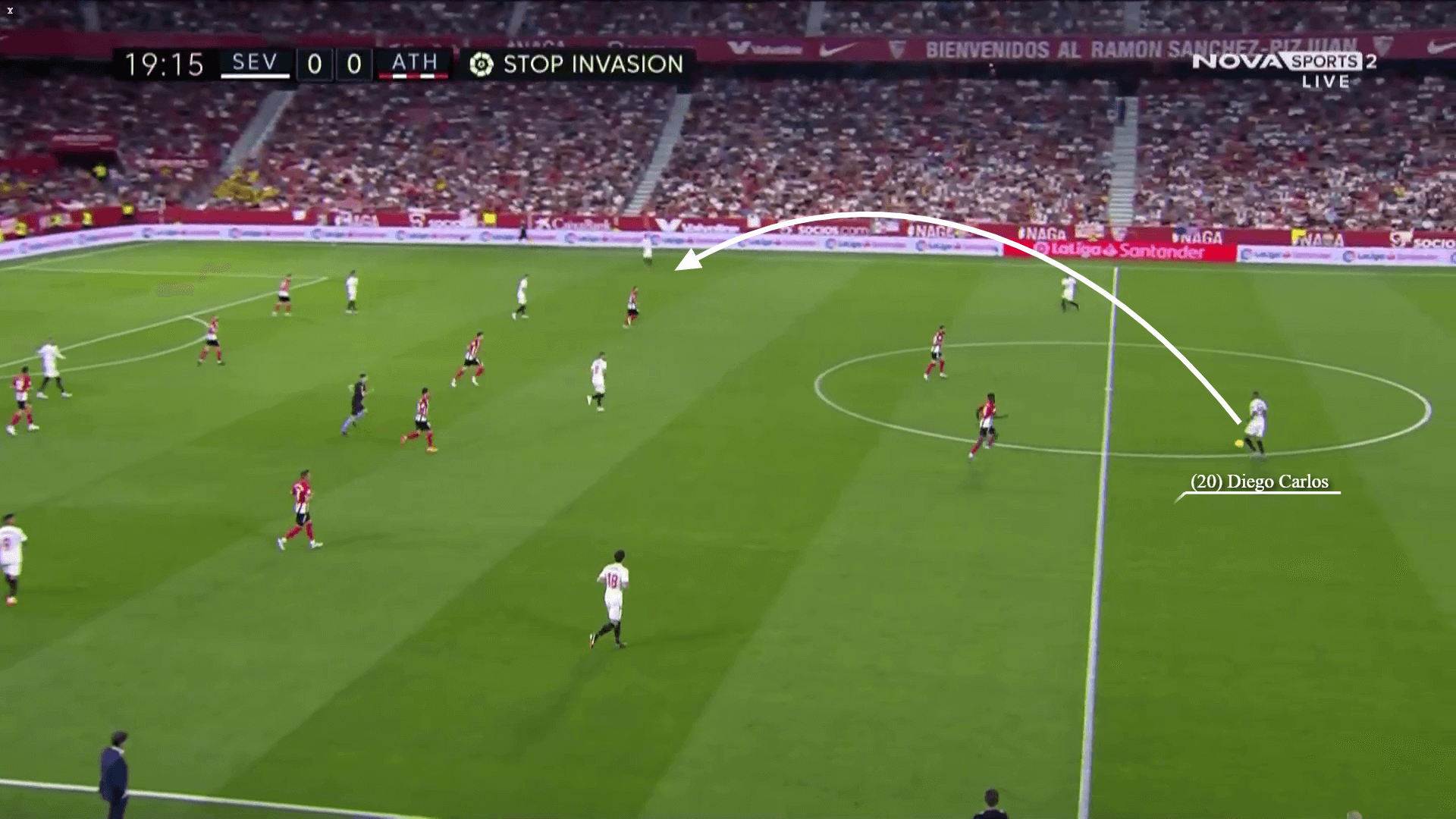 … And the same type of pass later in the first half… 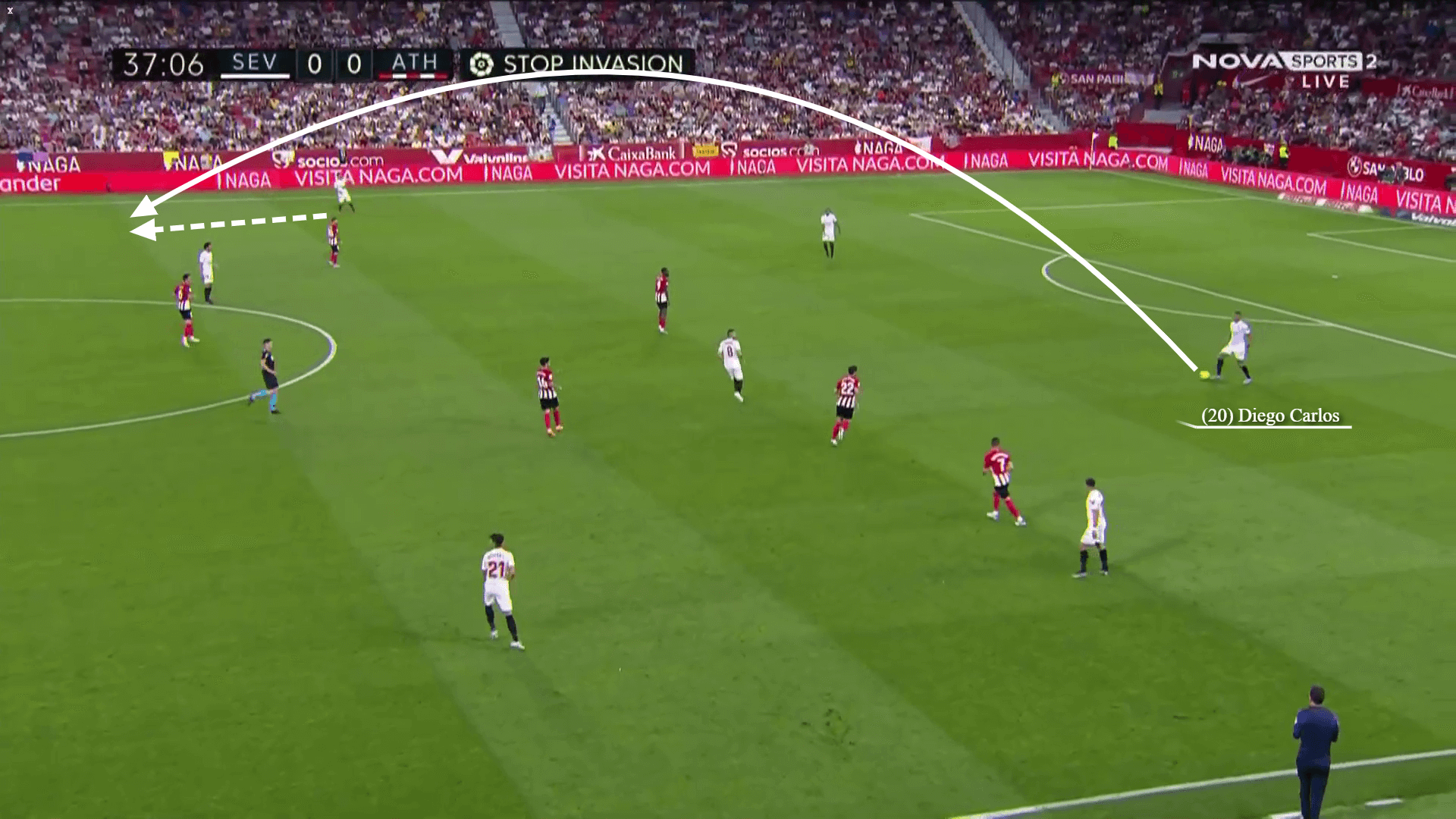 Then in the game at home to Cadiz in April… 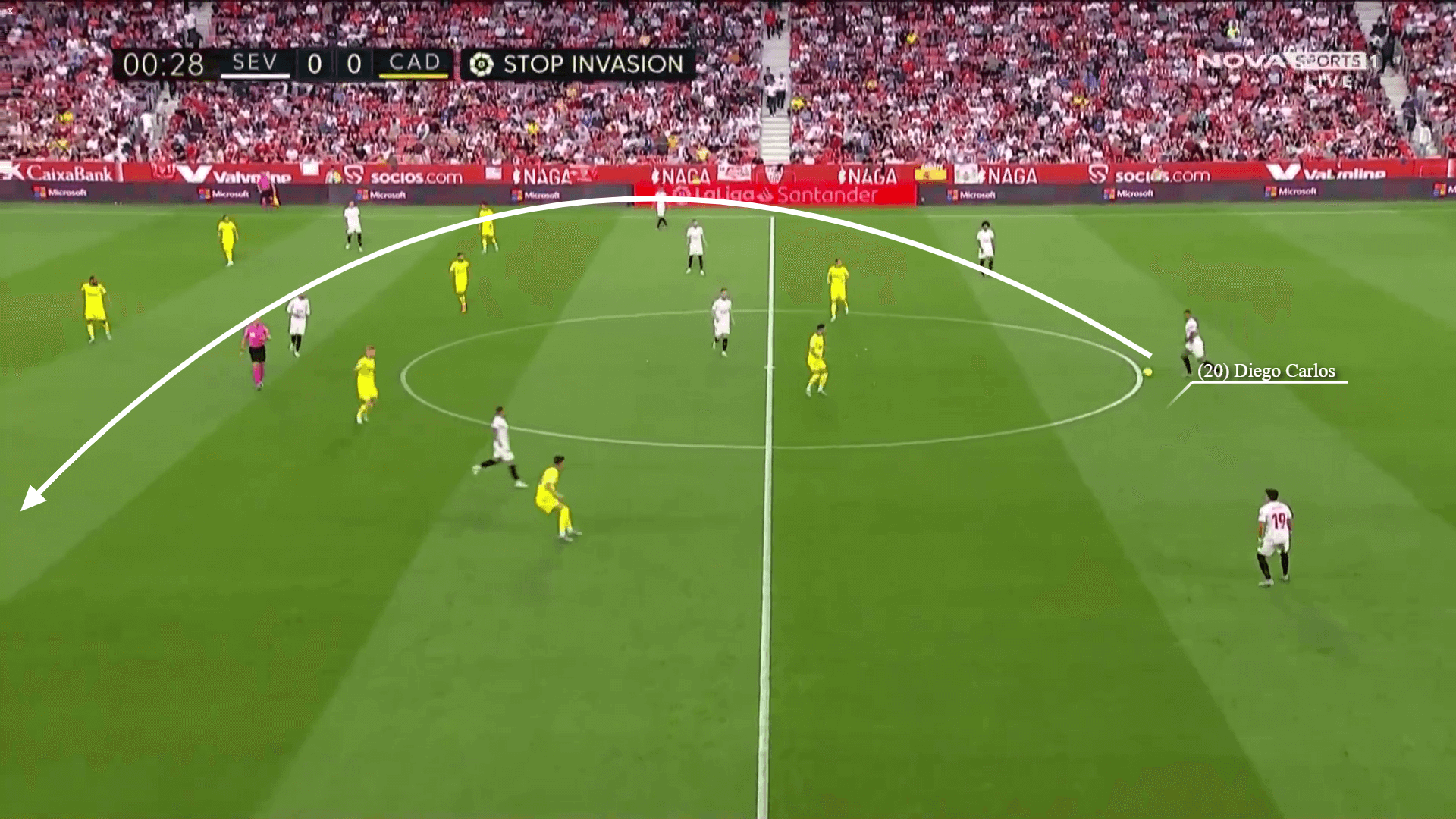 ..and in the match at Atletico a fortnight ago. Again, he’s looking to spread the play. 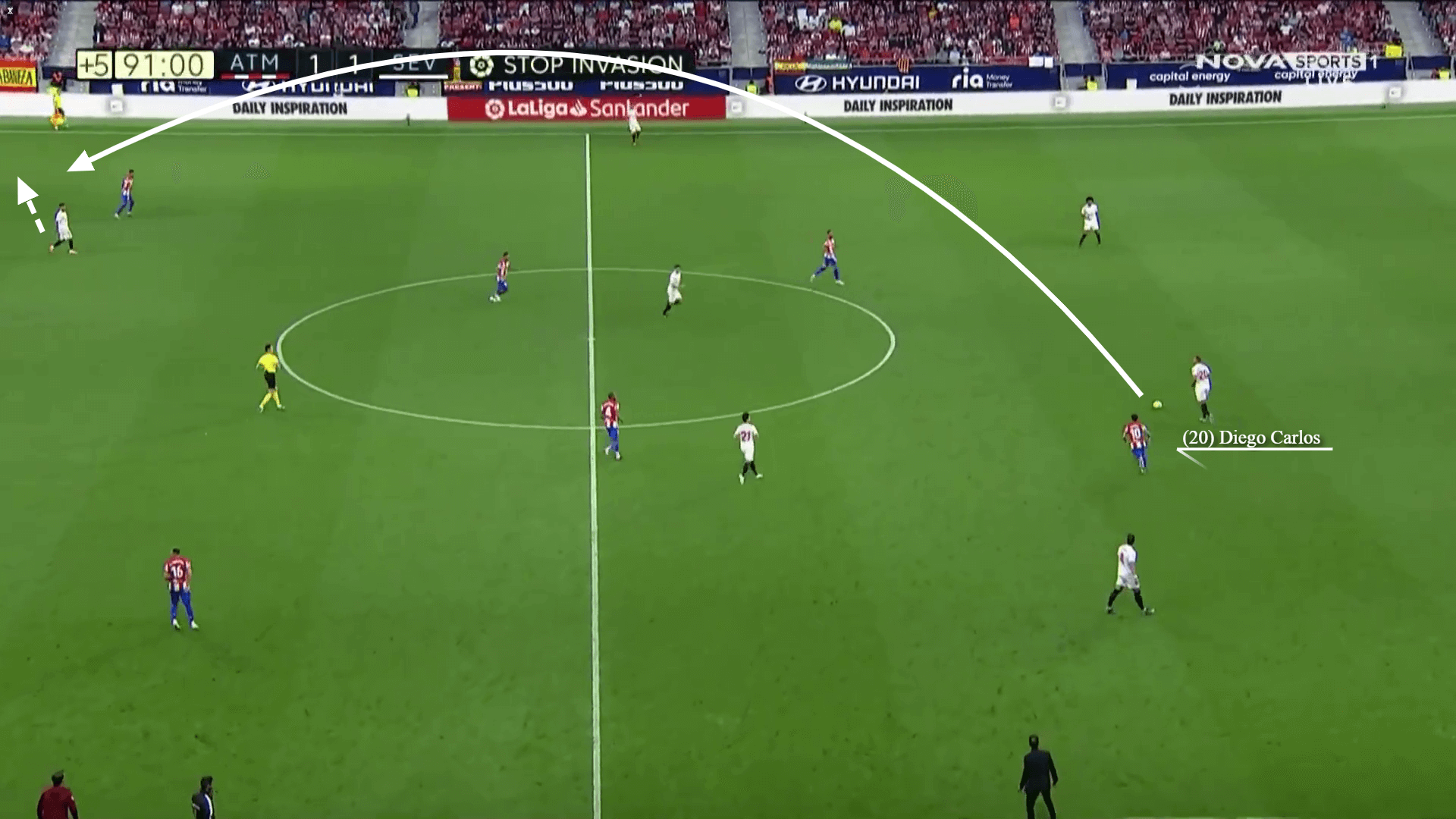 Over the past two seasons, Diego Carlos has learned when and where to take risks, as highlighted in the pizza chart earlier in the piece. When he comes under pressure, he coolly keeps possession and looks for an easy option.

Playing comfortably as a left-sided defender despite having a significantly stronger right foot also broadens his appeal.

Newcastle were strongly interested in January when they were searching for defensive reinforcements but they opted for Dan Burn instead. Diego Carlos may have come back into the reckoning this summer with Eddie Howe still looking for another defender, but Villa have moved quickly to get the deal done.

The club want to cut out some of the individual errors in defense and add experience and leadership to their squad and hope the addition of Diego Carlos will help them do that.