Johnny Nic uses Unai Emery’s latest European triumph to pay tribute to a manager sacked by Arsenal for what?

Who’s this then?
Unai Emery Etxegoien is a 50-year-old 5ft 11in former midfielder, born in Basque country in Hondarribia who currently manages Villarreal and had just handed Max Allegri and Juventus their arsewith a 3-0 win in Turin to take them through to the Champions League quarter-final.

His playing career started at Real Sociedad but finding it difficult to get first-team games he moved to Toledo in the second tier of Spanish football for four years then it was on to Racing Ferrol, Leganés and finally Lorca Deportiva in the third tier, who he was playing for when he had a career ending knee-knack.

With limited opportunities and injuries, he only made 330 appearances over 14 years and was just 33 when he hung up his boots and took up coaching. Lorca, a new club formed in 2002, offered him the gig and he was an immediate success taking the club into the second tier for the first time. Unai was awarded the Miguel Muñoz Trophy as coach of the season and followed it up the following campaign with a superb fifth finish. However, the club was only to exist for 10 years, and the following year were relegated, by which time our man was already offski to Almería, again getting them promoted into La Liga for the first time since they were formed in 1989. Then they finished in a creditable eighth the following season. With these sort of achievements under his belt, bigger fish began to circle and Valencia signed him on.

While the club had its financial problems, he still got them to sixth in La Liga but better was to come with a third placed result in the next season taking them into the Champions League. His reputation as a modern and effective coach was now growing as he led them to three consecutive third place finishes. In his fourth season he led them to the semi-final of the Europa League.

Looking for new challenges, he ended up at Spartak Moscow for six terrible months before getting the boot. It was his first big failure and he returned to Spain to lick his wounds for six months, then taking the Sevilla gig.

It was here that he cemented his reputation as one of Europe’s best coaches as in his first season he took the side to fifth and won the Europa League, overcoming Benfica on penalties. Then he only went and won it for the next two seasons as well, beating Dnipro Dnipropetrovsk and then in 2015-16 beating Liverpool 3-1, coming from behind.

This brought PSG sniffing around his back door. He quit Sevilla and took the Paris gig for two years. As we know PSG isn’t a football team any more than the Harlem GlobeTrotters are a real basketball team (do they even exist anymore?). There is something fundamentally dishonest about the whole thing and of course it is fueled by lavish amounts of Qatar Sports Investments’ money. Here is not the place to analyze that investment but the smell that comes off it isn’t perfume.

Anyway, Emery pitched up, won three trophies in his first season and four in his second including Ligue 1. He was in charge for the infamous 6-1 reversal v Barcelona, ​​but two years was enough to manage a phoney club and off he went to north London to be the first post-Wenger boss. No-one was left alive who could remember what it was like for Arsenal not to be managed by Arsene Wenger, expectations were too high.

After a dodgy August, Arsenal won 11 games in a row, their best run of form for 11 years. They had an unbeaten run of 22 games, including a 4-2 win over Tottenham. When they lost 3-2 to Southampton in December, it was the first time they had been defeated in all competitions since August. They went on to finish fifth, which was a place higher than the previous season under Wenger and of course they got to the Europa Cup Final. This time though, they lost 4-1 to Chelsea. It was a good season overall but the knives were already being sharpened by those who didn’t realize that Arsenal needed a total reboot.

He made the mistake of spending a club record £72million on Pepe who was, and still is, quite crap, as three goals in 17 appearances this year suggests, and a poor start meant that by November the calls for him to get in the sea were too loud and he was ousted in favor of Mikel Arteta who has not yet equaled or bettered Unai’s league finish, but should do so this year, three seasons on.

But the following summer he was back with Villareal and what did he do? Of course, he led the club to the Europa League victory over Manchester United 11-10 on penalties. His fourth success in the tournament. Unai gonna Unai, baby.

Last autumn there was a bit of broo-ha-ha with Newcastle who wanted his services and started blarting about like a pissed sailor on the docks with pockets full of cash, before he’d actually agreed to go to Newcastle. So he pulled out and let Eddie Howe take the blood-soaked cash and stonewall questions about executions and 10,000 murdered children. He dodged a bullet there, which isn’t something that 250,000 Yemenites can say.

Currently Villarreal are seventh and a Europa League place looks possible. Meanwhile they’re in the quarter-final of the Champions League and Emery remains one of Europe’s best coaches. He will never be short of suitors even if Arsenal thought he was beneath them because of how he said the word ‘evening’.

Why The Love?
Unai has done well with sides on very limited budgets and at PSG and Arsenal on massive budgets. I think he likes the former best and it is surely the most satisfying. Valencia and Sevilla both played a counter-attacking 4-2-3-1 and he carried that on at PSG, although they would fall into a 4-3-3 to dominate possession. At Arsenal they played a sort of counter-attacking game and it worked until that second season. Their problem seemed to be that once they gained possession, they found it hard to dominate the ball, largely due to that fact, quite a lot of the players were not very good.

Football is not just about buying players, as Pepe has well proven, it’s about getting the right players in the right positions at the right time. Arsenal were too flighty, too impatient, too ignorant. He had a very good first season but somehow some felt they deserved more. The future was to prove otherwise. Had Emery been left in charge, who’s to say he wouldn’t have bettered Arteta’s record to date?

We’ve got to address how he was treated/mocked by the English press, media and fans. A man who can speak two languages ​​in England is rare, but we expect everyone else from everywhere else to be able to speak English, although we reserve the right to take the piss out of his pronunciation if he does.

So ‘good evening’ became a thing, which is weird for a start. At times it was like we were watching a re-run of ‘Mind Your Language’ from the mid-70s, the premise of which was ‘foreigners: they can’t speak English very well can they?’

For a while, it was a really big thing. Am I being too harsh or extreme to suggest this slight mispronunciation was used against him, when the sh*t hit the fan? I don’t think so. The dismissal of Emery was in part due to the usual English xenophobia and a belief that whatever you’ve ever done in Europe is not relevant to our top flight. “This is the Premier League, Jeff, he doesn’t know what it’s like” remains a mantra that many still believe. At its worst it was as though his inability to say the word reflected his inability to do the job. Which is obviously pathetic, but that symbiosis was present. Still, no tabloid used the headline Emery Bored which I expected every week, possibly because no one knows what an emery board is.

You will not achieve what he has achieved without being bloody good at your job. There were plenty of mistakes made at Arsenal, they should’ve finished fourth but three defeats in a week to Crystal Palace, Wolves and Leicester and a draw at Brighton scuppered that. He had to deal with The Ozil Problem and Pepe was bought, he has since suggested, more by the club than by himself.

Things fell apart in the second season and he took the weight of the blame for it, even though it was far from all his doing, the club was at least as complicit in the collapse, given how many players left and who came in. So he’d barely got his feet under the table when his removal became inevitable and now, even he accepts that fact. 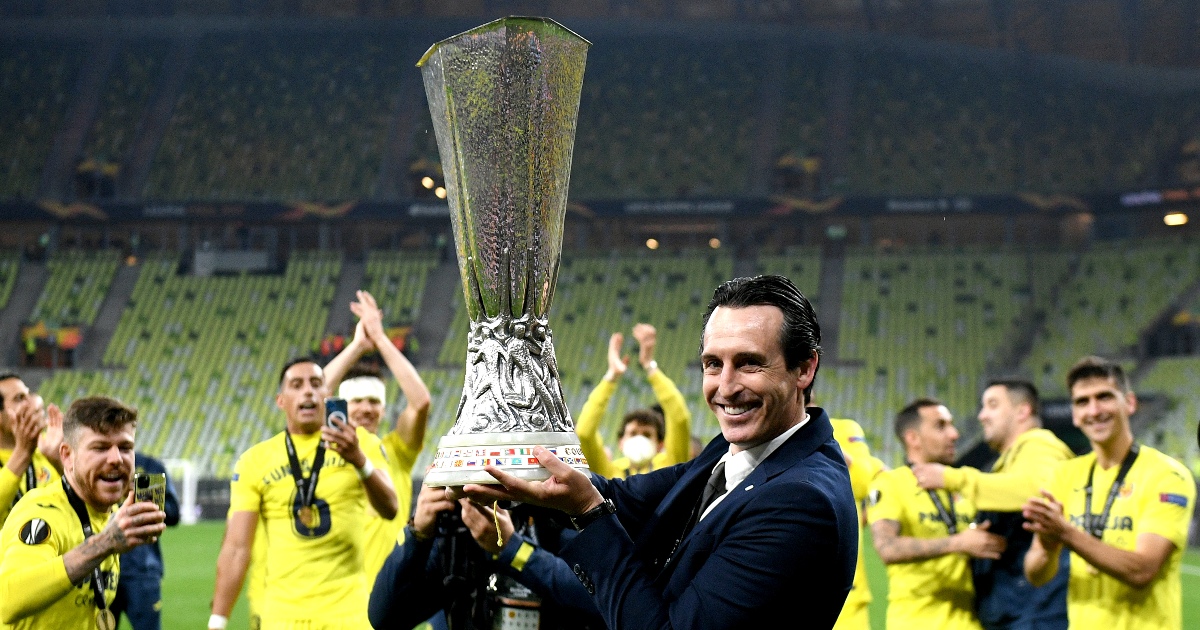 This weeks’ great win over Juve…

HIs most recent European trophy…

Future days
You might argue that Unai, in managing PSG, has already had a lick of the thickest cream, didn’t particularly like it, despite winning almost everything, and enjoys his best work at clubs that lie just below the biggest jobs. Which meant that he really was ideally suited to Arsenal, a club that, when he took over, probably had too great a sense of himself and didn’t realize how far adrift it had become.

Had they stuck with him – after all he finished fifth and got to a European final only to be beaten by Chelsea who had been financially doped for nearly 20 years – would they have done any worse than two eighth finishes? I doubt it. And a Europa League win would obviously have been in the equation too at some point. That they were not prepared to sit out a difficult period was a lesson they did not seem prepared to learn. So the piss-taking of his accent ramped up and he became, shamefully, almost a comic figure.

He has never had a win ratio lower than 46.2 percent. At Arsenal it was 55 percent, the second highest of his career, but still not good enough for them.

He’s only 50, so can reasonably be assumed to have 20 to 25 years of work in him. A role with Spain’s national squad seems likely at some point and you wouldn’t rule out him returning to England once again, although we know how failing once (and in that only for three or four months) in England can turn some off you for life, even though you should only have one opportunity.

I see him as the lion which patrols the perimeter of the elite compound, eyes narrowed, waiting for the opportunity to pounce once again.