In this series, we analyze the problem areas within teams, and suggest solutions in the form of potential incoming players. It’s a fantasy, but a fun one.

Today, it is Manchester United’s turn…

Manchester United are now under the new management of Erik ten Hag.

Last season was extremely disappointing, leaving the club without a trophy in what will be approaching six years since the 2017 Europa League final and with no Champions League football to play when UEFA’s elite club competition begins again in September.

The consequence of that, in concert with the flux and uncertainty resulting from another change of head coach, is that while United remain an attractive destination for players, they don’t possess quite the allure they once did, and we’ve tried to reflect that in these selections.

While United’s appeal might be waning, they have plenty of positions in need of improvement. In fact, there are very few areas in which they could not do better than what they currently have. So while we’ve limited ourselves to three picks in this article, it’s with the acceptance that it could have been many more.

Throughout his four years managing Ajax, Ten Hag had the benefit of one of the world’s most balanced full-backs in Noussair Mazraoui.

Outstanding with and without the ball, the 24-year-old Morocco international would have been a perfect solution if he’d followed Ten Hag to Manchester.

Unfortunately, he’s joining serial German champions Bayern Munich as a free agent, leaving us looking for someone who possesses the technical qualities all Ten Hag full-backs share, but also offers a significant attacking improvement on Aaron Wan-Bissaka and an upgrade on Diogo Dalot , who is really more of a well-rounded back-up than a long-term starter.

He enjoyed a generally excellent loan spell at Swansea City in the Championship last season, playing as a wing-back and showing a burst of acceleration and range of skills that indicated a very bright future. He was recalled in January and then immediately loaned back out, again in the second division with Bournemouth, but barely featured for a side that went on to win automatic promotion.

That suggests that while Laird fits the profile of a Ten Hag full-back and might impact United’s recruiting strategy in this area, he still requires further experience — not least of playing in 1) a back four and 2) as an actual full-back .

While Laird is one for the future at age 20, Bayer Leverkusen’s 21-year-old Jeremie Frimpong, who was in Manchester City’s academy for a decade and then spent a season and a half at Celtic before moving to Germany in January 2021, would be an excellent option now.

Using smarterscout data — which gives players a rating from zero to 99, relating to either how often they perform a given action compared with others at their position (such as the ball recoveries and interceptions metric) or how effective they are at one (such as how well they progress the ball upfield) — we can look at what we might expect from Frimpong in the Premier League.

Frimpong is aggressive and exciting with the ball at his feet and that’s obvious looking at his pizza chart for last season below.

He is the kind of outstanding high-volume ball-carrier and dribbler (99 out of 99) who can manufacture opportunities in the attacking third. The Netherlands Under-21 international is quick enough to be a threat even from a standing start and seems accomplished when driving off the touchline into central areas, as seen by his receptions in the opposition box rating (84/99). He’s very good at those ‘give-and-go’ smart, quick passes (link-up play volume: 88/99) and also quite secure in possession (ball retention ability: 89/99). 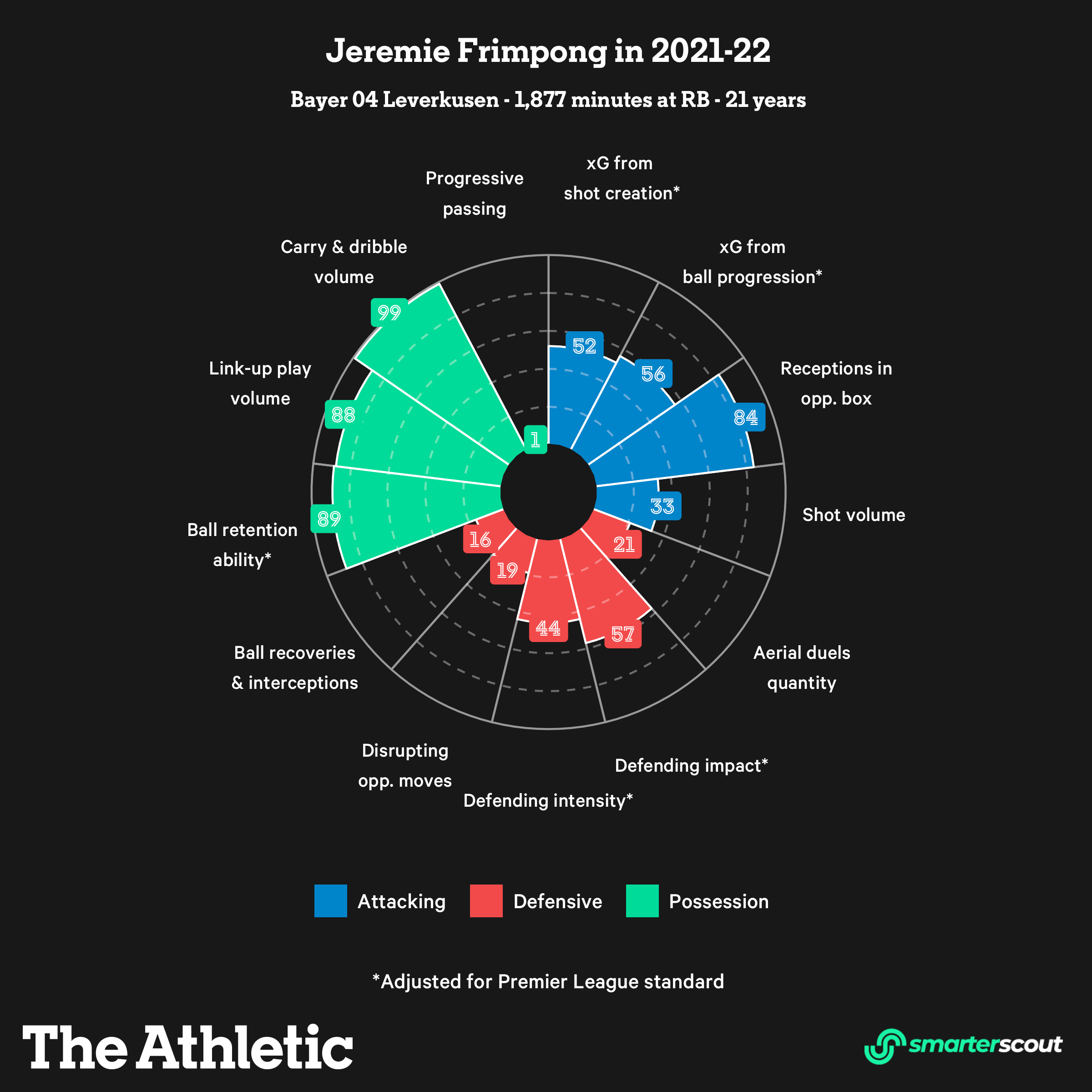 Frimpong would be a highly sensible transfer — but so would Lyon’s Malo Gusto, and he’s our first choice at this position.

Gusto is three inches taller than the 5ft 7in Frimpong, and wouldn’t be such a concern when required to defend close to his centre-backs.

He’s young, having only turned 19 in May, excellent with the ball — both secure and safe when needed (ball retention ability: 91/99) and comfortable moving it quickly and interchanging with team-mates (link-up play volume: 93/99) — and would provide a similar attacking contribution, curing one of the problems United have encountered with Wan-Bissaka by providing runs into the box (receptions in the opposition box: 76/99) and an extra option going forward.

Decent at both shot creation (51/99) and, more importantly, generating chances for others through ball progression (67/99), Gusto is a reliable passer across all distances and much more of an asset in possession. 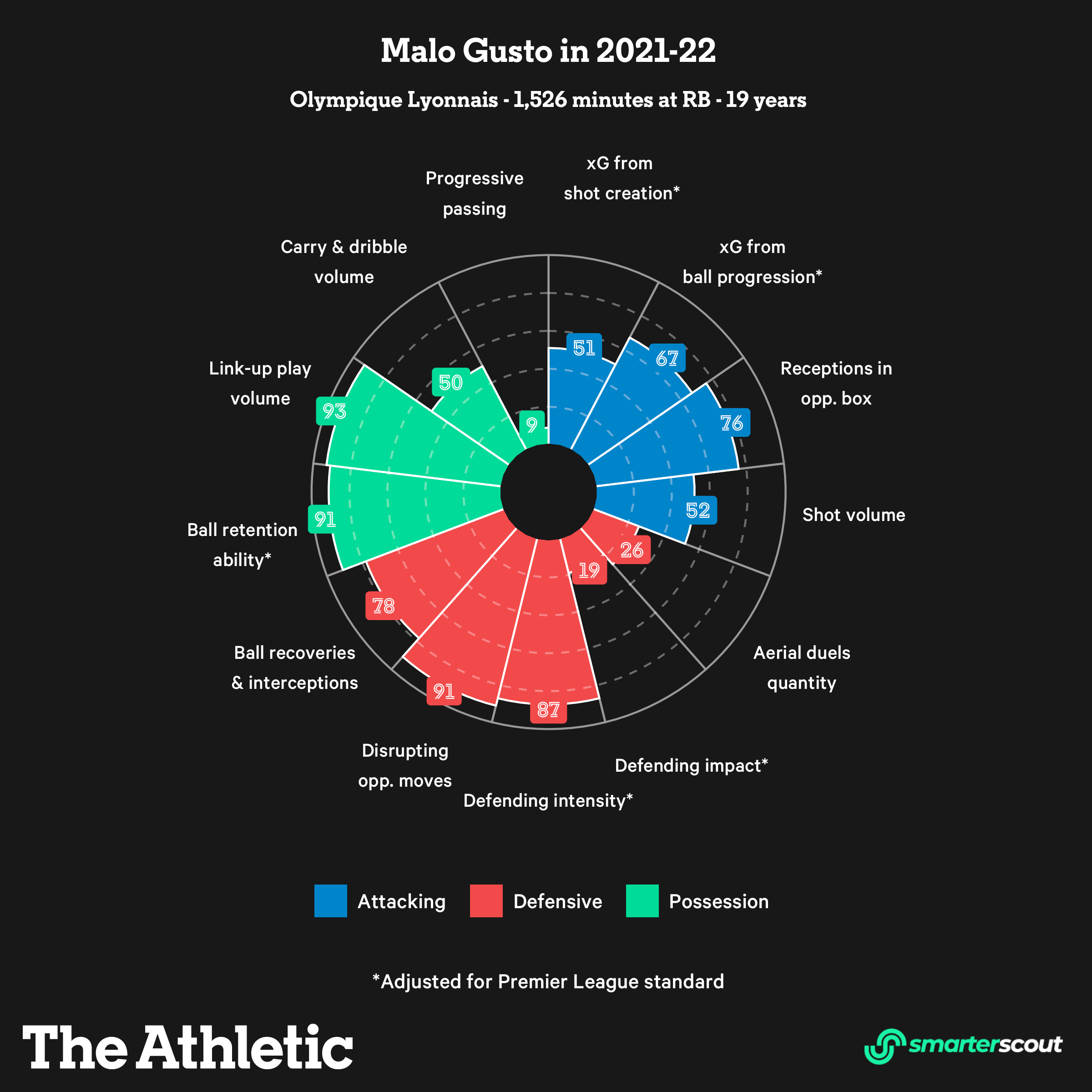 United are unlikely to ever be quite as dominant in the Premier League as Ten Hag’s Ajax were in the Dutch Eredivisie, so defensive security is more of a concern with his full-backs now.

Gusto is a strong tackler who appears disciplined positionally and, at that age, has many years of improvement ahead.

Over his four and a half years as Ajax coach, Ten Hag’s midfield went through several stages of evolution and never had a predetermined formula. The focus, instead, was on finding the right chemistry.

At different times, he deployed Edson Alvarez, Frenkie de Jong and Lisandro Martinez as the deepest man in his midfield, all contrasting players with different strengths and who, collectively, describe the lack of rigidity in the department’s construction. Ten Hag also alternated between using a single and double pivot, which means that composition matters, not necessarily personnel or shape.

Whatever midfield Ten Hag builds at United, it will not involve Paul Pogba, who has left a free transfer, or Nemanja Matic, who has done the same and been reunited with his old Chelsea and United boss Jose Mourinho at Italy’s Roma.

Donny van de Beek prospered under Ten Hag at Ajax so he’s presumed to have a future with him at United after spending the second half of last season on loan at Everton and will compete with Fred for the No 8 role, while Bruno Fernandes is a certain starter in attacking midfield and Scott McTominay can provide cover in the deeper positions.

The good news is that United seem to be on the verge of succeeding in reuniting Ten Hag and De Jong. Signing him from Barcelona would probably still leave this squad short of a midfielder, perhaps one with strong defensive attributes, but it would be better to see how this new midfield takes shape — and how De Jong is used, if he does arrive — before suggesting any further additions.

Jesse Lingard, Anthony Martial and Juan Mata will all follow Pogba and Matic through the exit, leaving an injury-plagued Marcus Rashford, an out-of-sync Jadon Sancho and the still-developing Anthony Elanga as the only options either side of Cristiano Ronaldo .

With Edinson Cavani also leaving, United could also do with a new centre-forward. But with Ronaldo’s position virtually guaranteed until the end of his contract this time next year, big expenditure on another goalscorer now seems unlikely.

On the right side of the front three, however, one option might be to reunite Ten Hag with Hakim Ziyech, who he coached so successfully at Ajax but who is yet to really establish himself at Chelsea two years after being signed. Ziyech is a useful attacking component who understands the tactical quirks of Ten Hag’s brand of football.

His flair and shot volume (96/99) are well-known strengths, but he’s also a highly progressive passer (70/99) who can provide the kind of penalty-box supply United’s stuttering attack has often lacked and an excellent free kick and corner taker, too. United managed just seven goals last season from set-pieces (penalties not included), the third-least in the Premier League ahead of only relegated duo Norwich City and Watford, so improvement and variation in that area are urgently required.

Ziyech can also put in quite a defensive shift when it comes to providing intensity (86/99), disrupting the opposition (97/99) and ball recoveries and interceptions (64/99). 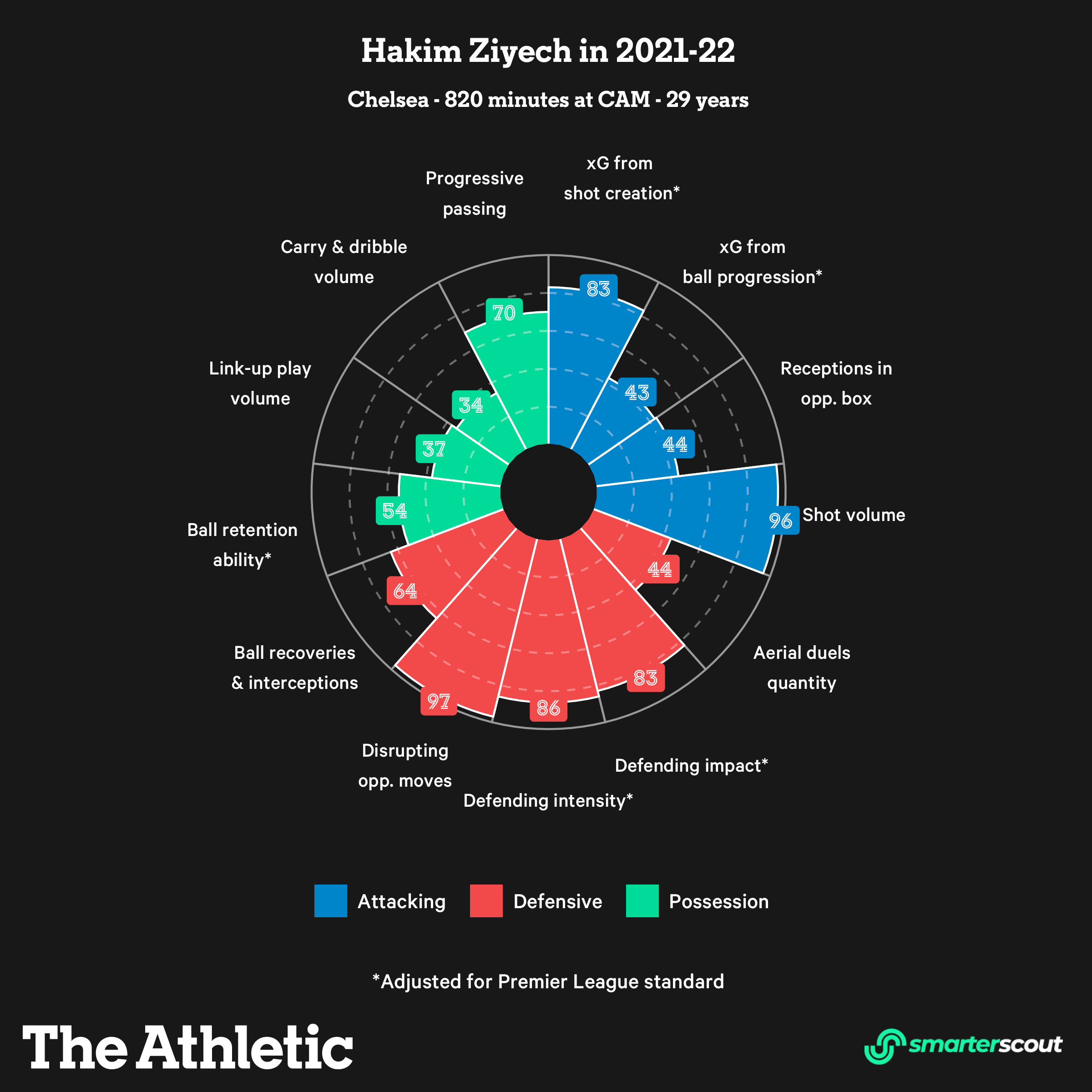 But, while Chelsea and United have done transfer deals in the past, Ziyech is hardly redundant at Stamford Bridge and this might be a difficult move to complete.

Instead, then, we’re picking Serge Gnabry, whose contract at Bayern Munich is entering its final year and whose relationship with that club appears to be deteriorating by the week.

Former Arsenal youngster Gnabry has developed into an outstanding player for club and country over the past few seasons. He’s reached double figures for goals in all four of his Bundesliga seasons with Bayern, as well as averaging better than a goal every two games for the German national team, with 20 in 34.

Turning 27 this month, Gnabry is one of the game’s premier wide forwards and one eminently suited to play for Ten Hag.

His pressing is dependable and smart (defending intensity: 55/99), and that’s a quality United desperately needs. In fact, their inability to exert pressure on the ball from the forward positions was openly mocked, particularly in games against their biggest rivals — think of the 5-0 loss to Liverpool at Old Trafford last October. With a now 37-year-old Ronaldo contributing little out of possession, Gnabry has a range of tendencies which can remedy those issues (ball recoveries and interceptions: 63/99). 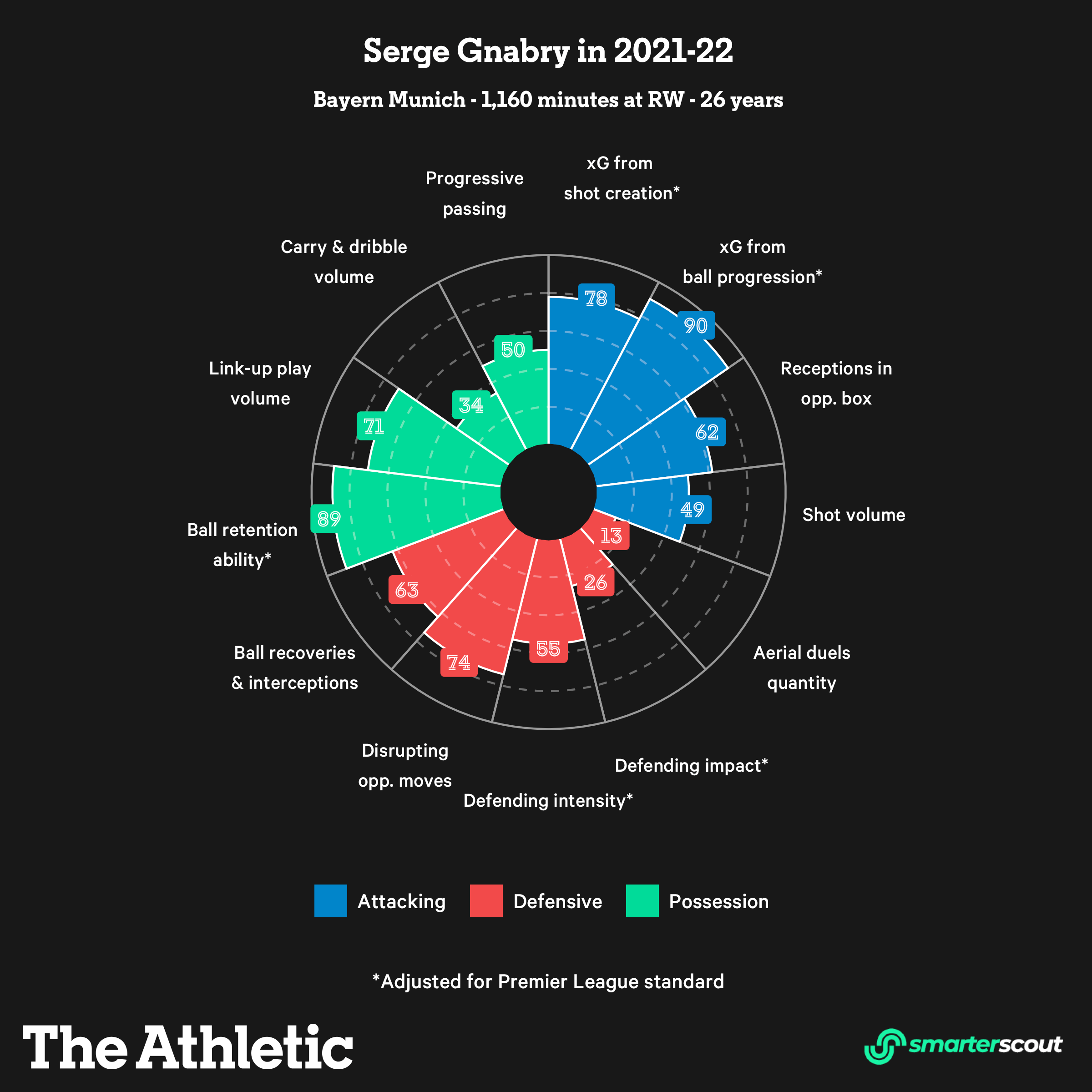 He also carries a broad attacking threat, which is not just described by his goals and assists numbers (xG from shot creation: 78/99) but also his capacity to beat defenders, penetrate attacking areas, and be regularly available as a passing option within the attacking zones (receptions in the opposition box: 62/99). He’s able to be productive and progressive with the ball (50/99) but also quite secure with it (89/99).

He is a right-sided player and that’s where he’s built his reputation, but Gnabry is accomplished across the other two positions in a front three too, particularly on the left, and that would provide a positional dexterity that Ten Hag doesn’t currently have .

It would also allow Sancho to move full-time to the right, his more regular home at previous club Borussia Dortmund, which could be key to unlocking the kind of levels he achieved in Germany.

So, Gnabry would be an excellent option.

If he is to leave Bayern this summer, it’s unlikely to be for another Bundesliga club, and his contract situation offers a rare opportunity to sign a player who would otherwise be unavailable or, at best, extremely expensive.