In recent days we discovered details of two pre-season friendslies, with Atalanta and Athletic Bilbao to visit Tyneside.

The Serie A team playing at St James Park on Friday 29 July, then the La Liga side on Saturday 30 July, a week before the Premier League season kicks off.

A nice little home double to hopefully fine tune pre-season preparations, as well as a chance for the Newcastle fans to renew their growing relationship with Eddie Howe and his squad of players, plus of course a chance to see new signings play for the first time at St James Park.

For Newcastle fans with a few miles on the clock, it will also bring back memories…

Kevin Keegan leading Newcastle United to promotion and then back into Europe, hammering Royal Antwerp and then meeting Athletic Bilbao.

United went 3-0 up in the home leg, only for visitors to hit back and the game ended 3-2, finely poised.

On 1 November 1994 Newcastle lost 1-0 away at Athletic Bilbao and went out on away goals.

However, for those of us who were lucky enough to be there, this away trip was arguably the absolute best ever.

It really does not feel like 28 (TWENTY EIGHT) years ago, the day of the match coinciding with a public holiday and with so many streets (officially or unofficially?), It was just one long party all day and into the night, continuing after the game. Fans of both clubs packing the streets and mixing brilliantly, shirts and scarves swapped, even new long lasting friendships made.

Ahead of their visit in just under nine weeks time, Athletic Bilbao have captured the spirit of that epic visit thousands of Newcastle United fans enjoyed so much….

It would be great to see a decent number of Athletic Bilbao supporters making the trip, particularly those who were around back in 1994, proving to be brilliant hosts to the traveling NUFC fans.

‘Athletic Club will face Newcastle United FC at St. James ‘Park on Saturday 30 July, in what is the Lions’ first confirmed friendly for the 2022/23 pre-season. It will be the fourth time that Athletic faces ‘Las Urracas’ (The Magpies, a very common black and white bird in England), the third in the city in the northeast of England.

The two teams met for the first time in the Uefa Cup round of 16 in 1994-95. The first leg, played at St. James’ Park, ended 3-2, in a match that Athletic lost 3-0. The lions managed to advance to the next round thanks to the double value of those goals, as they made a good 1 to 0 in San Mamés with a goal by Kuko Ziganda.

Those matches have gone down in history for the atmosphere that was experienced both in Newcastle and in Bilbao, which led to a very special twinning between the fans. Red-and-whites and black-and-whites coexisted in the pre-matches, forming a bond that continues to this day. In fact, at the end of the match in Bilbao, hundreds of athleticzales invaded the field of play and headed towards the away field to applaud the Newcastle fans. Away supporters responded by chanting: “Athletic, Athletic, Athletic!” 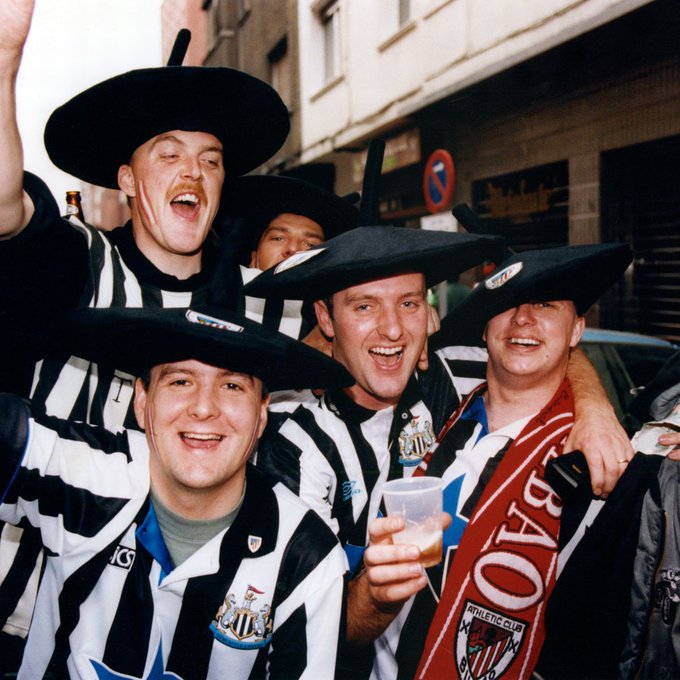 Now managed by Eddie Howe, Newcastle finished last season in eleventh position in the Premier League and their top scorer was Callum Wilson, with eight goals in 18 games. Also known as the ‘Toon Army’, Newcastle play at St. James’ Park, which seats 52,305. It has been the home of ‘Las Urracas’ since the club’s founding in 1892.

Both Athletic and Newcastle and the regions to which they belong share many cultural similarities. As in Bizkaia, the history of Tyneside cannot be understood without the naval and mining industry. Most families in the area have some family link with these sectors.

Newcastle upon Tyne, the full name of the city, is one of the few cities in the United Kingdom that has only one professional football club, so its inhabitants, known as Geordies, feel a deep attachment to their beloved ‘Toon Army’. The citizens of Newcastle are also known for their dialect, Geordie, which is clearly a hallmark of the area, as well as for their friendly and outgoing nature. The ‘second name’ of the club, ‘Toon Army’, is precisely the Geordie house brand, since the word Town (village or city in English) is pronounced Toon in the Tyneside region. On the other hand, Newcastle fans also love to see their own wearing the striped shirt, in their case, black and white.

‘Las Urracas’ have a solid youth academy and their players are known for turning down big contracts to stay at Newcastle United. The best-known case is that of the club’s record goalscorer, Alan Shearer, who scored 206 goals in 406 games. Five members of the current first-team squad were born in the region or grew up in the academy, and one of them, 24-year-old midfielder Sean Longstaff, who has just signed a new contract, is an example of the pride of the inhabitants of the city.

Furthermore, former Athletic Club manager Howard Kendall was also born on Tyneside (in the town of Ryton) and followed Newcastle as a child, regularly attending games at St James’ Park.