Sixty-three games in which Liverpool played every minute in each of the four competitions they entered this season.

Two domestic trophies and a club-record 147 goals across a campaign that had Jurgen Klopp’s men within touching distance of an unprecedented quadruple of trophies.

This is Liverpool’s season, broken down by the numbers…

Playing every game across all competitions is a remarkable feat in itself, but this is not the only time a British side has done it – Middlesbrough in 1996-97 (when they reached both domestic cup finals but were relegated) and Celtic’s famous quintuple in 1966 -67.

Liverpool have done it before themselves too, in the 2000-01 season – winning the League Cup, FA Cup and UEFA Cup, playing 63 games along the way. 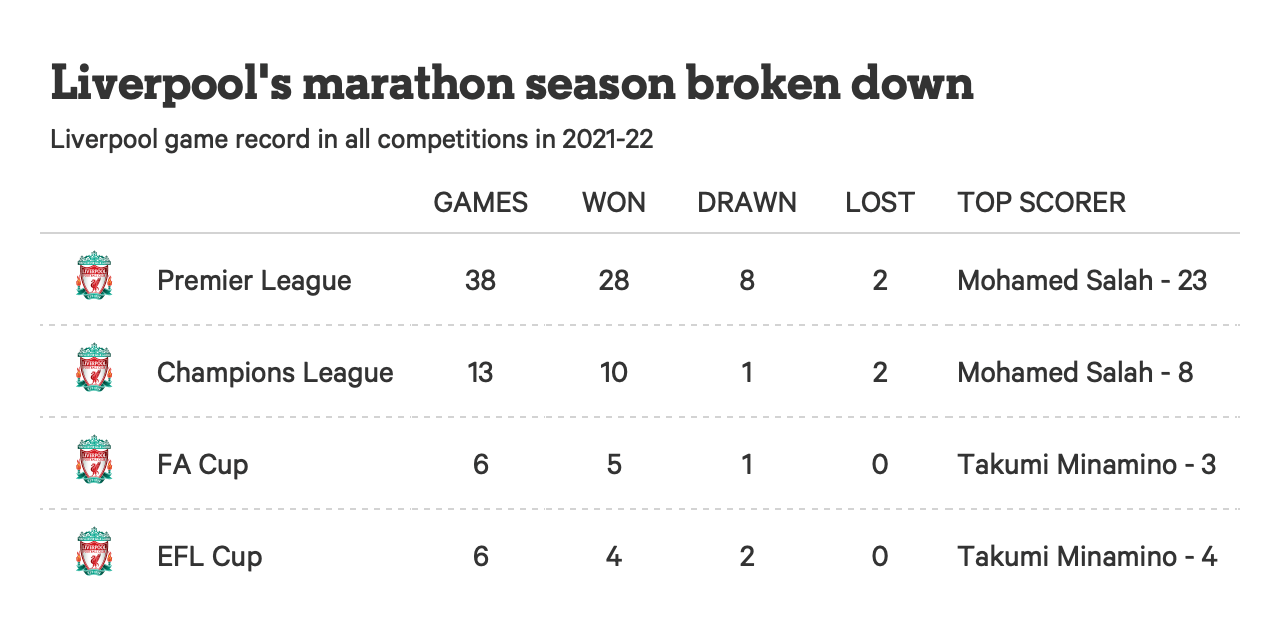 After replacing Brendan Rodgers in the Anfield dugout in October 2015, Jurgen Klopp inherited a squad that also played 63 games in a season, as they reached the final of the League Cup and Europa League – losing out to Manchester City and Sevilla, respectively.

However, in Klopp’s full seasons in charge, this has been by far the most congested campaign to date. 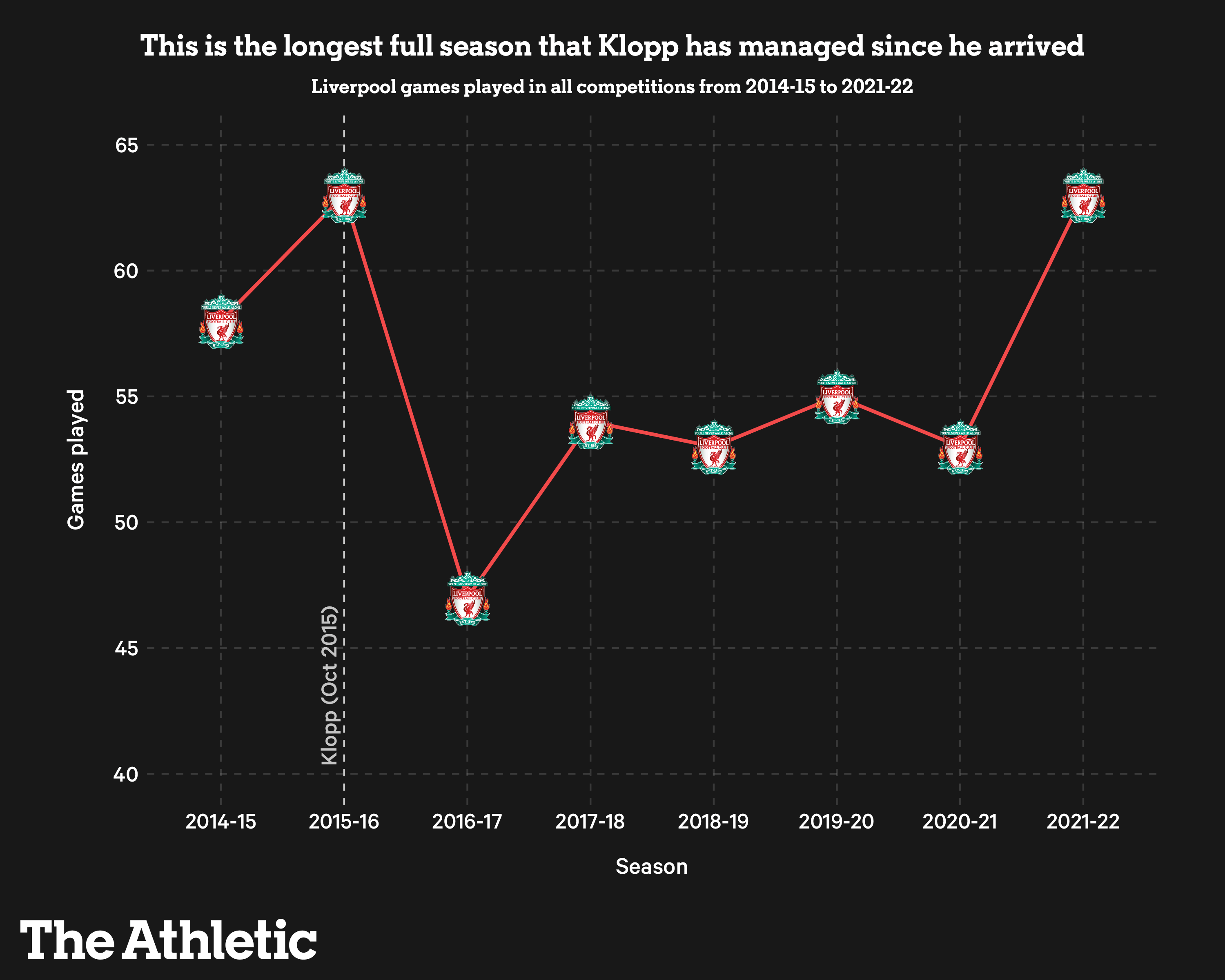 Liverpool’s medical department must be commended for navigating each player’s fitness across the entire seasonwith 45 of Liverpool’s 63 games being played within three or four days of each other.

December was a typically busy month with the rush of games around Christmas and Liverpool won six, drew one, and lost only their second Premier League game of the season at the hands of Leicester City. They did not lose again in the league. But April, with their runs in the Champions League and FA Cup, was their busiest month (nine games – won seven, drew two). 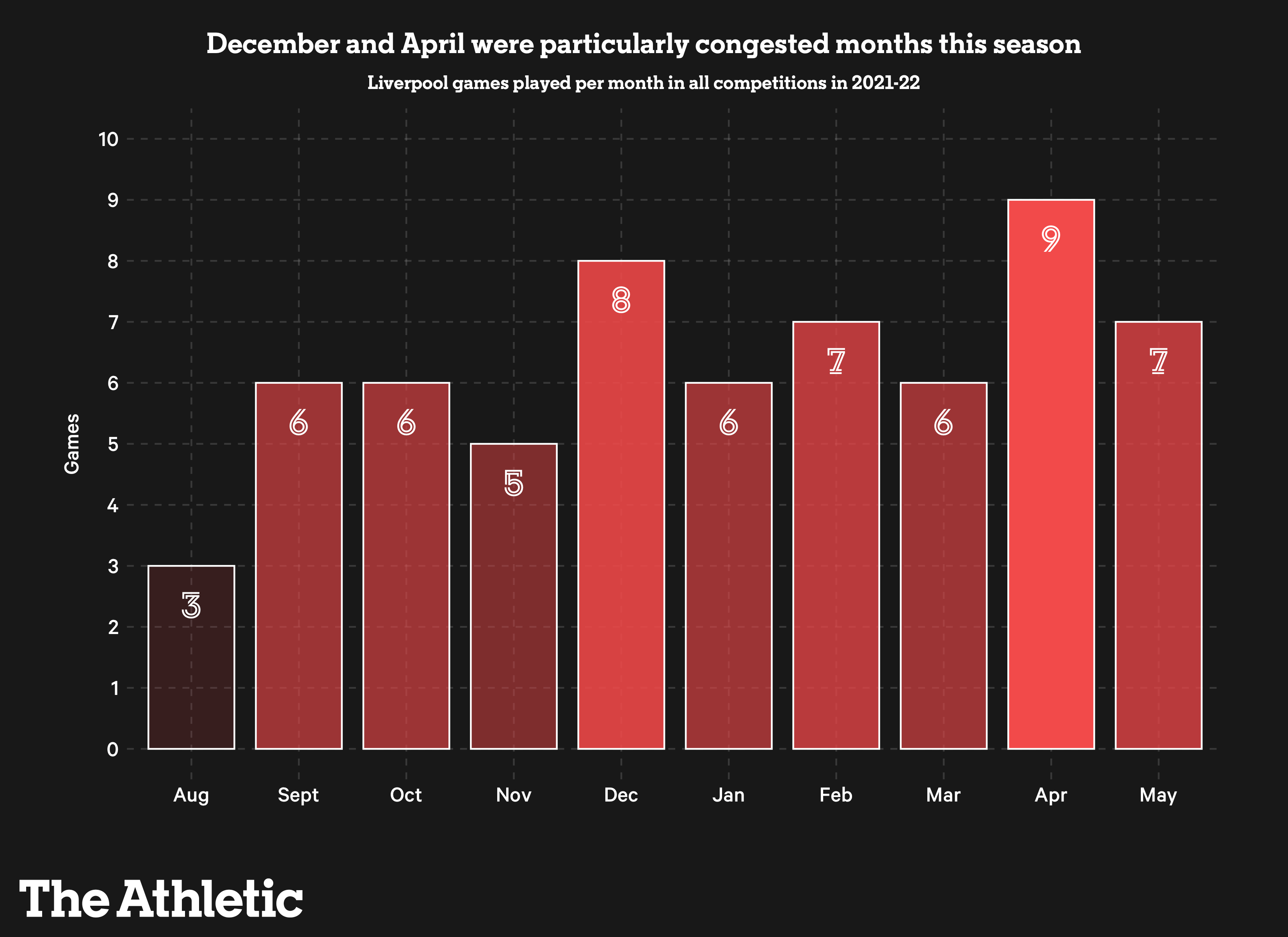 Klopp used 37 players across the 63 games, but which players in the squad had the most minutes in their legs by the end of the season?

Unsurprisingly, there is a skew towards the back five, and it was the goalkeeper Alisson who played the most minutes (4,890). Next up is Virgil van Dijk (4,620), who showed few signs of any long-term effects of the ACL injury he suffered in the 2020-21 season. 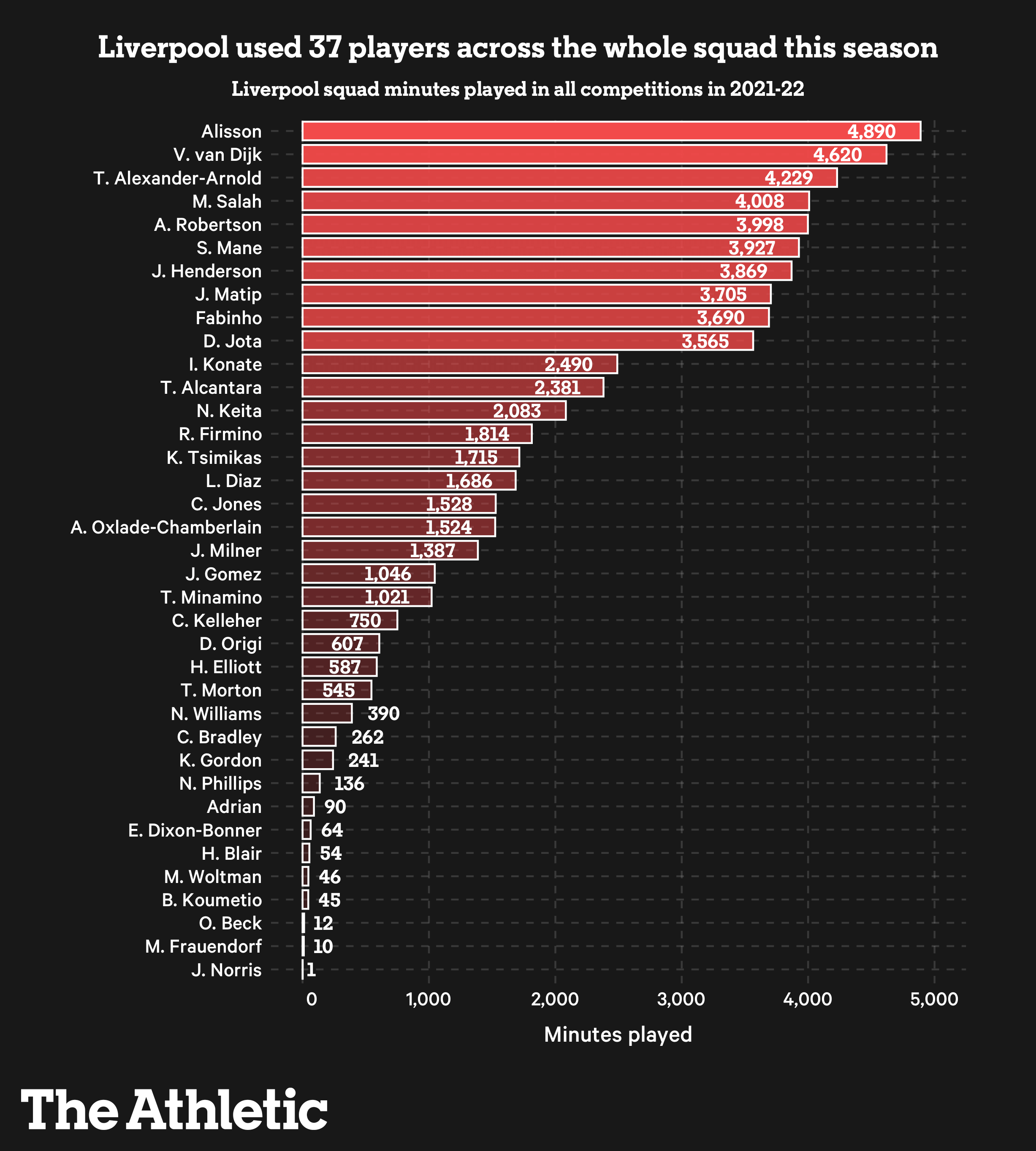 The alchemy of youth and experience was perfectly balanced as Klopp used his squad widely across all competitions. First-team minutes were handed out to multiple academy prospects including Kaide Gordon, Elijah Dixon-Bonner and Harvey Blair.

In total, Klopp gave minutes to 10 teenagers this season, with the 19-year-old pair of Harvey Elliott and Tyler Morton profiting most – each of them played more than 500 minutes for the first team. 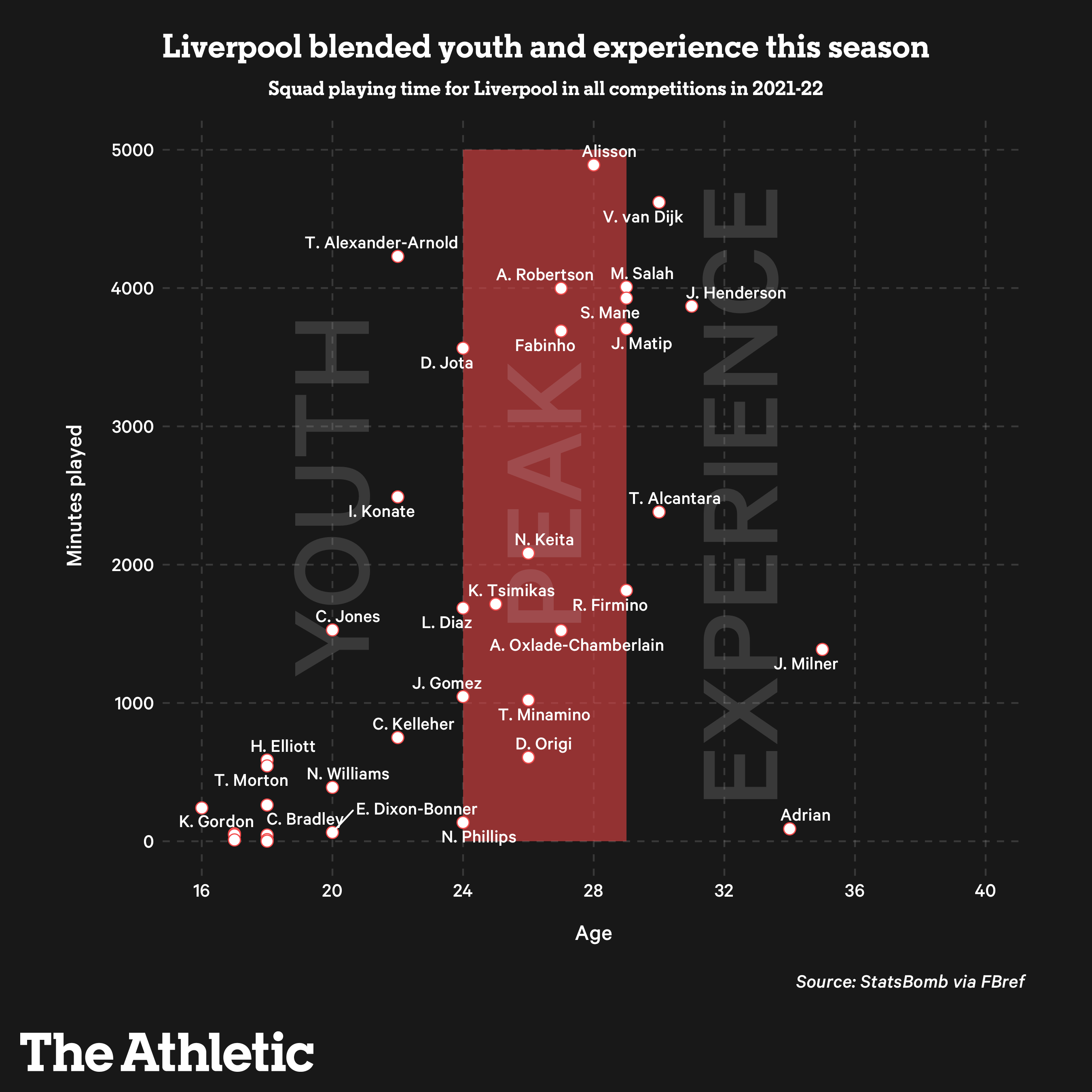 Twenty players contributed to a total of 147 goals in all competitions.

The usual suspects of Liverpool’s forward line lead the way but Klopp can be encouraged by the contribution from Diogo Jota and January signing Luis Diaz, with 21 and six goals apiece. Liverpool’s traditional front three has now become a collective front five. 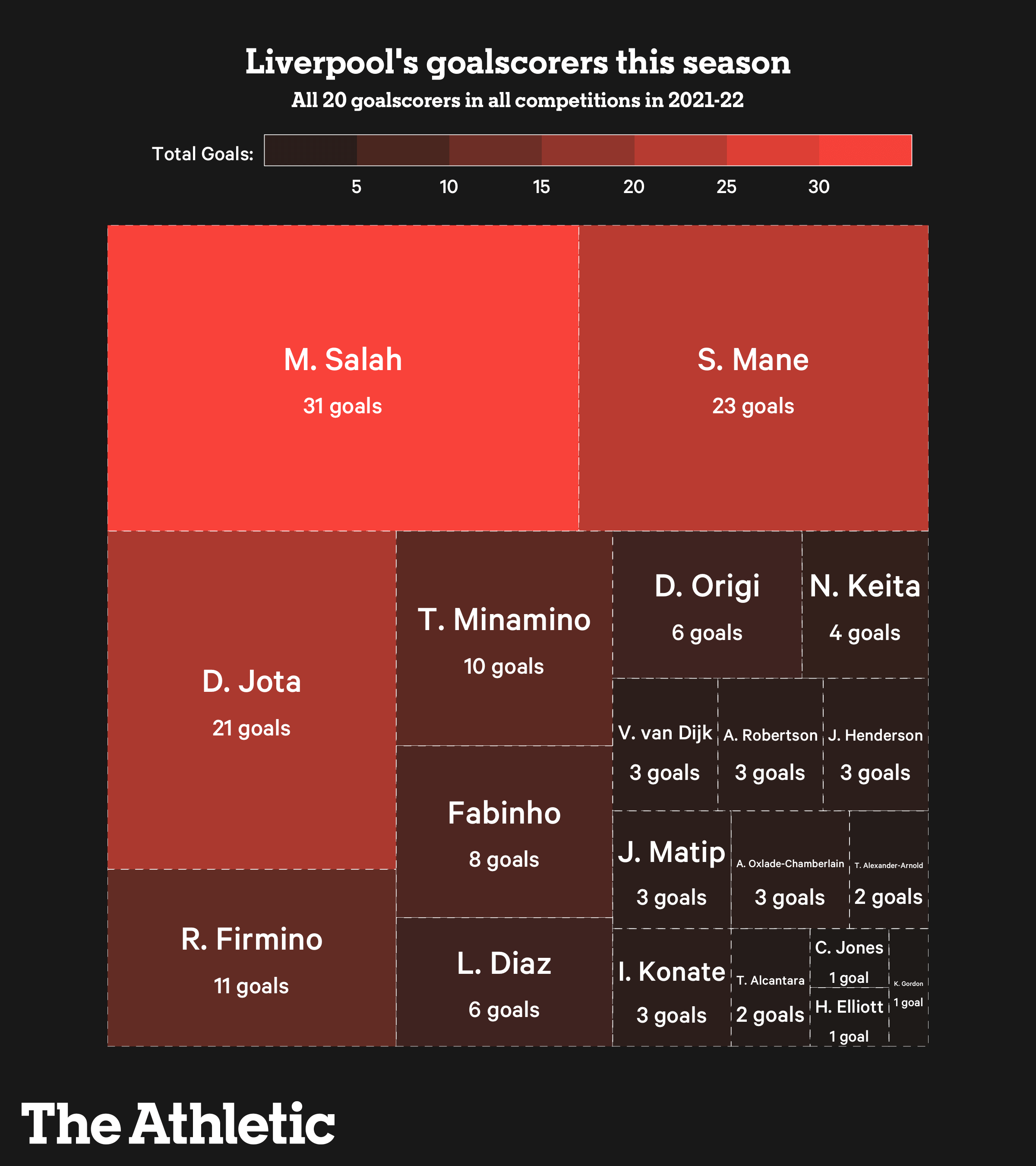 On a per-90 basis, the unsung Takumi Minamino had the best goal return among those players with 900+ minutes played.

The Japan international finished the season with a respectable 10 goals scored at a rate of 0.88 goals per 90. The value of those goals was crucial, as Minamino finished the squad’s top goalscorer in both the FA Cup and EFL Cup. 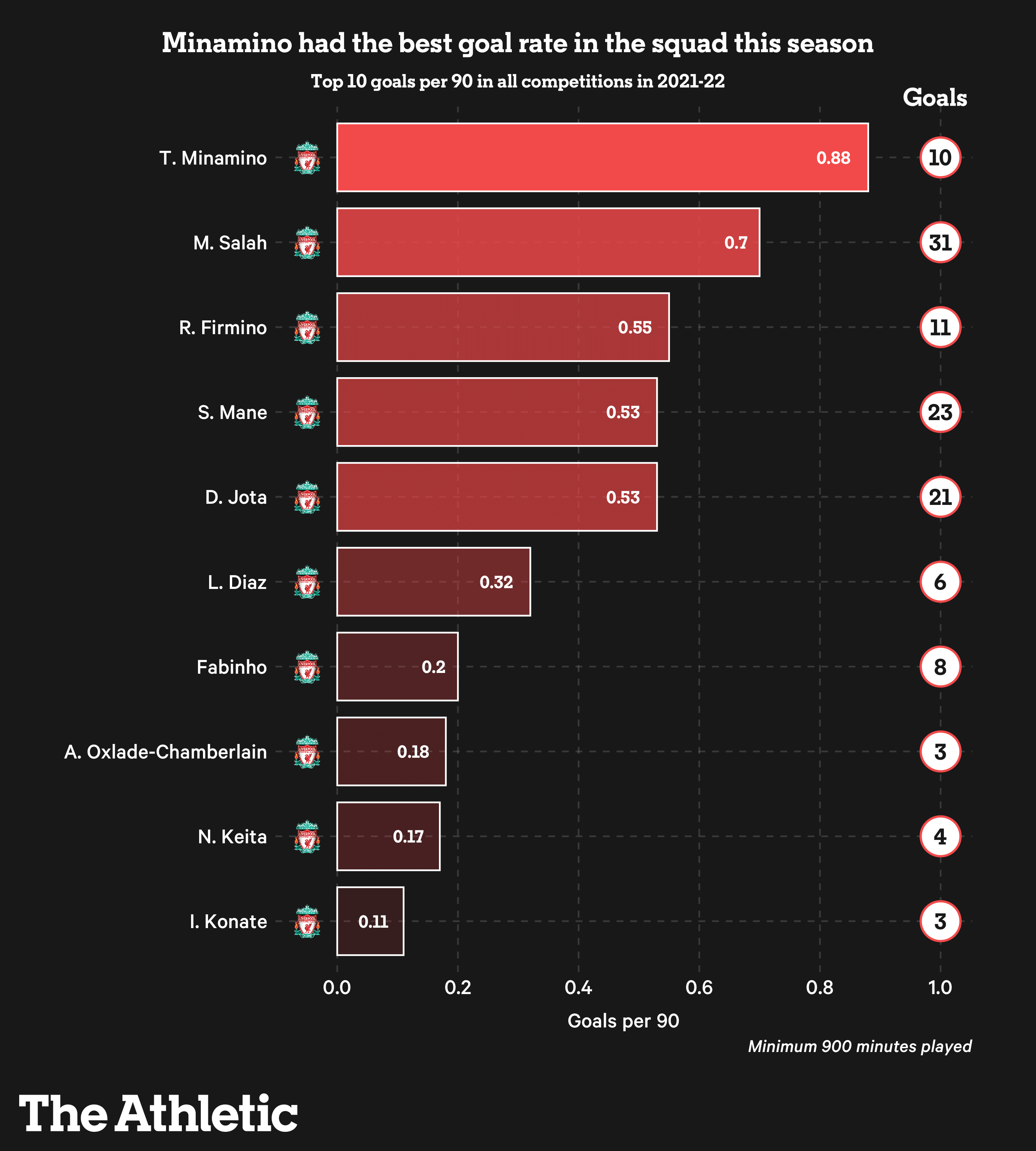 Creatively, Trent Alexander-Arnold grabbed a career-high 18 assists in all competitions – leading the squad ahead of Salah (15) and fellow full-back Andrew Robertson (14).

Alexander-Arnold retains his title as the most creative on a per-90 basis too, with a rate of more than one assist every three games (0.38 per 90) as Liverpool’s right channel became as dangerous as ever in recent years. 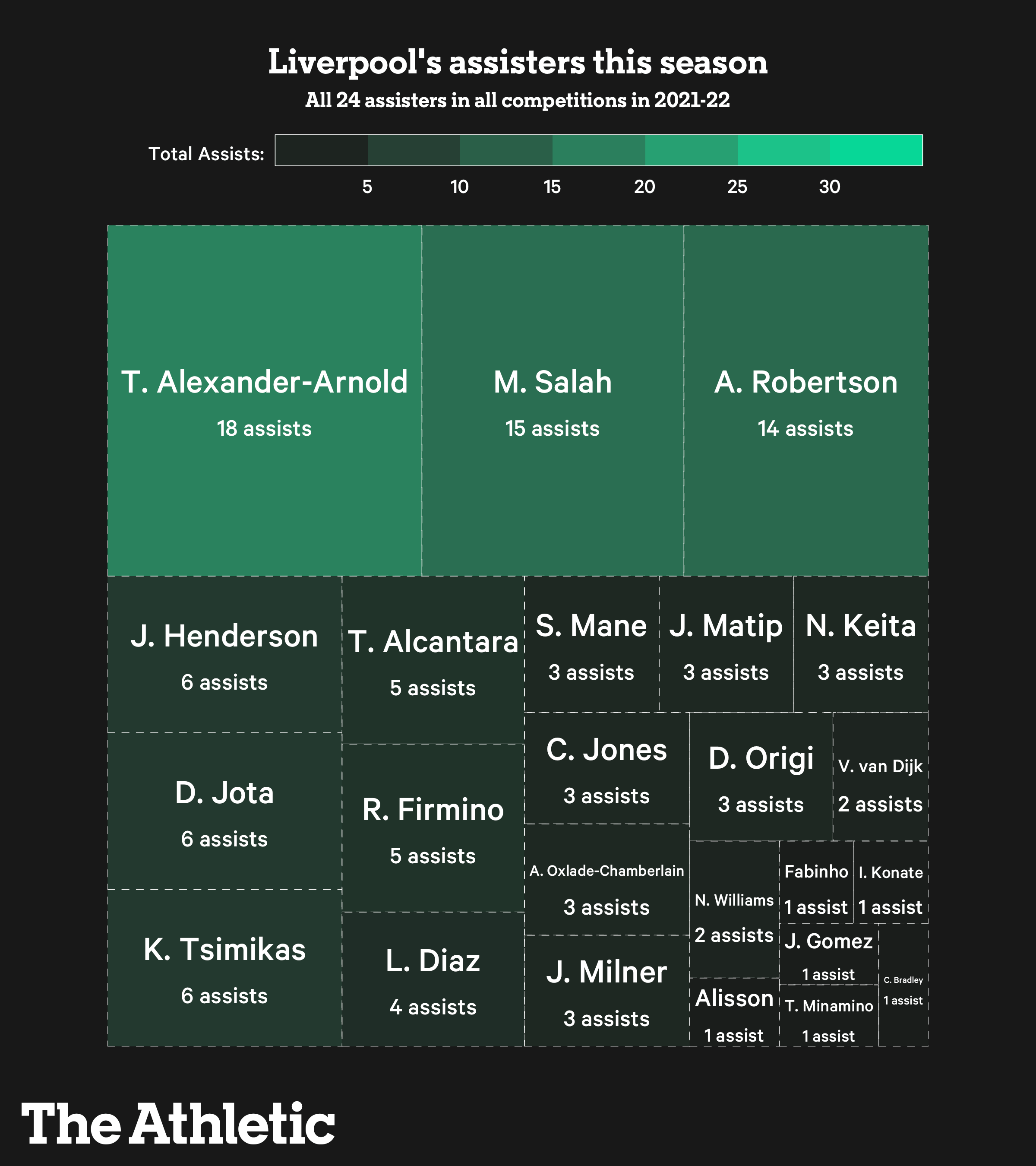 Productivity from out wide has been a key part of Liverpool’s identity under Klopp, and delivery from set pieces has gone hand-in-hand with the expectations put upon their full-backs.

This is particularly pertinent given the assist rate delivered by Kostas Tsimikas (0.31 per 90), who has shown himself to be a capable creative deputy to Robertson from left-back, with six assists (two from set pieces) at almost exactly the same rate as his positional peer. 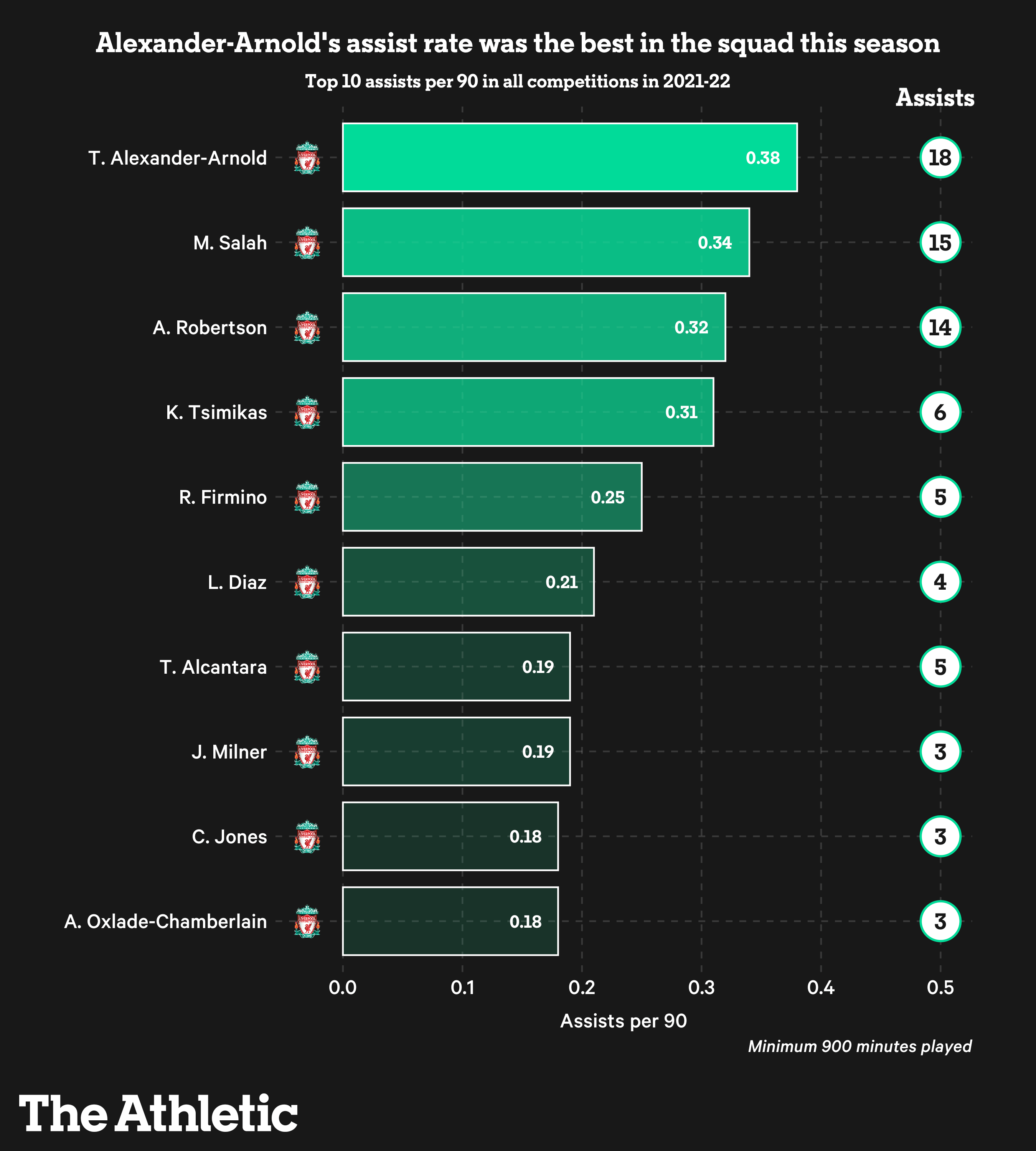 Such creative, entertaining football took Liverpool to three finals and meant that on the final day of the season the Premier League title was still on the line.

In a marathon campaign, Liverpool did not stop battling until the final second – and despite their defeat to Real Madrid, Klopp insisted they would do it all again next season.