Liverpool forward Takumi Minamino has completed his £15.4 million move to Monaco after signing a four-year contract with the Ligue 1 club.

The Japan international will cost the French side an initial £12.9m with a further £2.5m in add-ons.

Minamino joined Liverpool for a cut-price £7.25m in January 2020 after featuring against them for Red Bull Salzburg in the Champions League but was always a fringe player and made just five starts in 30 Premier League appearances.

He was more of a cup specialist, playing a key role in last season’s Carabao and FA Cup victories, scoring seven goals in nine matches.

“It’s a great joy for me to join AS Monaco,” the player told asmonaco.com. “I am happy to be part of the club’s project, which has just finished on the podium (third) twice in a row and is one of the most recognized in an exciting championship.

“I can’t wait to discover my new environment and do everything possible to help the team.”

The forward spent the second half of the 2020/21 season on loan at Southampton, scoring twice in 10 Premier League games, before returning to Anfield last summer.

Jurgen Klopp has already brought in forwards Fabio Carvalho and Darwin Nunez – for a club-record £85m – this summer, with Sadio Mane departing for Bayern Munich in a deal worth up to £35m.

‘A move that suits both parties’

The writing was on the wall for Minamino when despite Sadio Mane’s departure to Bayern Munich, Liverpool added both Fabio Carvalho and Darwin Nunez to their already stellar attack this summer, moves which probably convinced the forward to join Monaco for next season.

The Japan international arrived at Anfield in December 2019 with a glowing reputation having stood out for RB Salzburg in their Champions League group-stage meetings with Jurgen Klopp’s side that season, so much so in fact that Liverpool’s players even told the German to sign him.

However, having acclimatised for the second half of the 2019-20 Covid-interrupted Premier League-winning campaign, Minamino – despite scoring his first goal for the club in the Community Shield against Arsenal at Wembley in August 2020 – still found it hard to force his way into the Reds’ established front three.

It took him a year to register his first league goal for his new team, who by then were struggling badly to defend their title, with the 27-year-old being sent out on loan to Southampton for the second half of the 2020-21 campaign. 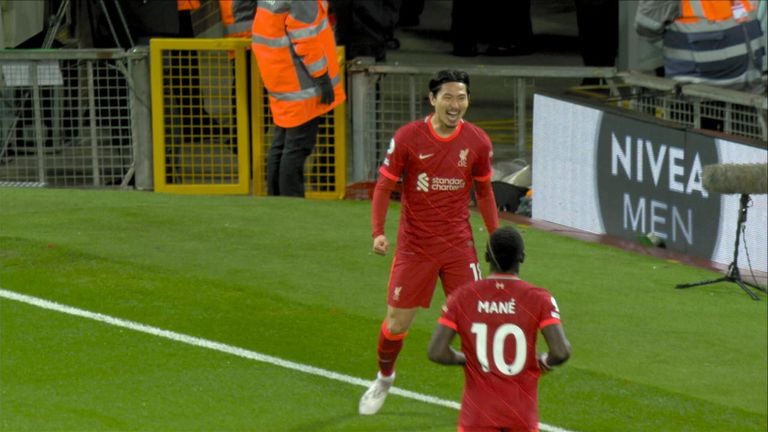 Minamino off the bench to score fourth

Klopp, though, wanted Minamino back at Anfield last summer, with the player going on to feature in 22 matches in all competitions last season as the club battled on all four fronts, in particular playing crucial roles in their League and FA Cup wins.

In fact, had it not been for a brilliant injury-time strike in the quarter-finals that forced a penalty shootout against Leicester City – one of his four goals in the competition – Liverpool would not have won the Carabao Cup, while he also netted three times in an FA Cup run which ended with victory over Chelsea in the final.

In the end, however, this seems like a move that suits both parties, with Minamino – in a World Cup year – now getting regular game time at a Champions League club (should they progress from the play-offs), while FSG have more than recovered the £7.25m they initially paid for him.

Liverpool begin the 2022/23 Premier League campaign with a lunchtime trip to newly-promoted Fulham on Saturday August 6.

It will be the fourth season in a row in which Liverpool have started a new campaign against a Premier League newcomer.

But after then facing Crystal Palace, Jurgen Klopp’s side will take on Man Utd at Old Trafford on August 20.

September will feature away trips to both Everton and Chelsea in September and Liverpool will also face back-to-back clashes against Arsenal and champions Man City on October 8 and 15 respectively.

Liverpool’s final game before the season stops temporarily for the winter World Cup will be against Southampton at Anfield on November 12 before returning to action at Aston Villa on Boxing Day.

The Reds then host arch-rivals United on March 4, before tricky-looking clashes in consecutive weekends at City (April 1) and against Arsenal at Anfield (April 8), before finishing the season at Southampton.