When Julian Nagelsmann oversaw Bayern Munich’s 7-0 demolition of VfL Bochum at the end of August to send his side top of the Bundesliga with a goal difference of 15:1, all signs pointed towards an 11th straight title heading to Munich.

But since then, three successive league draws against Borussia Mönchengladbach (1-1), current league leaders Union Berlin (1-1) and VfB Stuttgart (2-2), have prompted questions to be asked, not least from within the team itself .

“Today, for the first time this season, I’m angry,” said Thomas Müller, so often a personification of light-hearted self-confidence for the Bavarians, after Bayern conceded a last-minute penalty at home to Stuttgart on Saturday.

“We have to understand that we want to win every single game. That’s our expectation. It was only 2-1, so you have to keep going tight until the end,” he continued, speaking to Sky.

“If we want to return to the top of the table as quickly as possible – and that’s our aim, that’s what we expect of ourselves – then we need to look at ourselves in the mirror, every one of us. Today was the first time I had the feeling we’d given something away.” 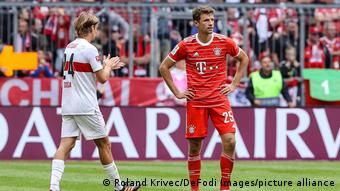 Nagelsmann: ‘I am a bit different’ this season

Nagelsmann remains very much the shining light of German coaching but, with such an array of talent to choose from, the 35-year-old is still aiming to find the right balance between astute tactical tweaks and savvy man-management.

“I am a bit different [this season],” he admitted to Sky, before Gladbach and the outstanding Yann Sommer held his team to a draw. “I’m a bit less focused on tactics, more on leadership. Just as we expect the players to develop, we have to develop as coaches, too.”

Man-management will be a key job for Nagelsmann this season, especially with players eager for game time ahead of this November’s World Cup.

Leon Goretzka in particular is said to be determined to secure a starting berth in midfield, although Kicker magazine report that Marcel Sabitzer, after a difficult first season in Munich, is considered internally to be the safer defensive variant alongside Joshua Kimmich.

But while Bayern were able to take advantage of the spaces Inter left at the back in the San Siro, Bundesliga teams are more accustomed to playing defensively against the perennial champions, making them harder to break down.

Following Saturday’s draw, which saw Bayern remain third as Union Berlin and Freiburg took over the top spot, Nagelsmann singled out Serge Gnabry, Leroy Sane and Jamal Musiala for their profligacy in front of goal.

“The aggressiveness in possession was a bit lacking,” he said. “A tad too much control, a bit too little risk and not enough hunger to go forward. But we still had three huge chances where you have to score a third goal – with Serge, Leroy and Jamal.”

Salihamidzic: ‘Nagelsmann has never had a squad like this’

Nagelsmann is quickly learning that Bayern Munich represents an altogether different magnitude to his previous employers RB Leipzig and Hoffenheim, two clubs considered rather plastic entities who draw little in the way of attention or pressure from beyond their immediate catchment areas.

But sporting director Hasan Salihamidzic, fresh from signing a new four-year deal with Bayern himself after an impressive summer in the transfer market, isn’t panicking.

“The coach changed the team a bit, which was okay,” he said after the Stuttgart game, adding that Nagelsmann has “never had a squad like this” and “is finding his style” on a steep learning curve.

“Of course, I’m always angry when we don’t win; a bit of self-confidence and determination are missing, and six points, too. But after the Champions League game, we had a lot of players who deserved to play , and who the coach tried to satisfy.”

An unusually poor run of results is always bound to magnify any murmurs of dressing room unrest emanating from individual players, especially in the build-up to a major international tournament.

But Nagelsmann is remaining calm, and insists that “the atmosphere in the team and in the club” is better than ever.

“I’m aware that the results aren’t enough at the moment,” he said ahead of the Barcelona game, the first Champions League home game since last season’s exit at the hands of Villarreal – the magnitude of which should not be underestimated.

“But as a coach, you have to try to see things more objectively. And my feeling is still better than it was this time last year.”