It was one of those moments, a few months into Antonio Conte’s Tottenham tenure, when it felt as if the head coach and his employers would never be able to pull in the same direction.

Conte gave an interview to Sky Italia at the end of the January transfer window and laid out painfully clearly the strategic differences between him and his club. Even though Spurs had just signed Dejan Kulusevski and Rodrigo Bentancur – who turned out to be transformational additions – Conte suggested they might have done things differently.

“Tottenham are looking for young players, players to develop, not players who are ready now.” Conte said. “That is what it comes down to.”

Conte did not exactly throw his weight behind this approach.

“It is inevitable that if you want to grow faster and if you want to be competitive more quickly, you also need players with a lot of experience,” he said, “because they can also lead to an increase in experience across your team. ”

Conte ended by admitting he had “come to realize that the vision of the club is this”.

This was not even the first time Conte had gone public with his view that Tottenham might benefit from signing a few 30-somethings every now and then. There was a pre-match press conference a few weeks before then, on 14 January, when he had made the same point. 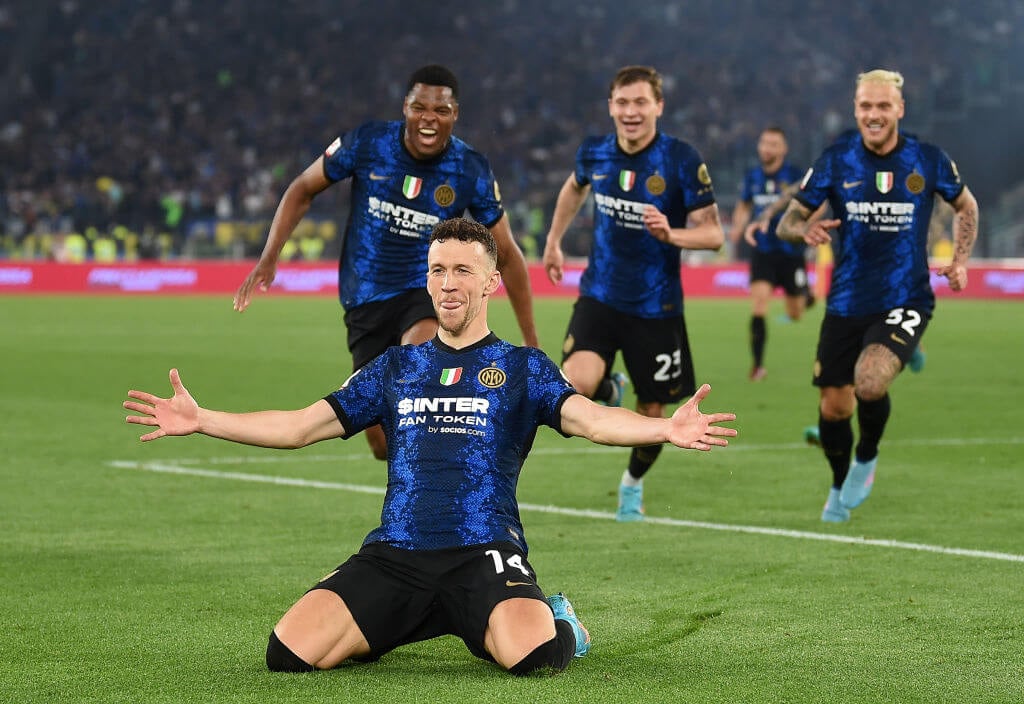 It did not feel back then as if this was an argument Conte would ever be able to win. Tottenham’s approach of signing young players was not just a policy of Fabio Paratici, or Steve Hitchen or Paul Mitchell or Franco Baldini or Damien Comolli. It came from the very top.

Tottenham, throughout the ENIC era, have generally focused on signing youngsters. (And understandably so: when you do not have the global clout of Manchester United and Liverpool, or the backing of Chelsea and Manchester City, why would you try to compete with them for the most expensive players in the marketplace?)

But with Ivan Perisic conducting his medical at Tottenham on Monday, before signing a two-year contract, it does feel as if Conte has won the argument. And the fact that the 33-year-old will be the first signing of this summer – and of Paratici’s third window in charge of recruitment – makes his arrival a deeply symbolic one.

Just as we saw with the £ 150 million equity injection last week, Daniel Levy looks increasingly willing to bend his own traditional way of doing things to give Conte the best chance of success.

When Conte talked about what Ibrahimovic has brought to Milan, he spoke about how the Swede helped his young team-mates to “handle the pressure”. (This has paid off, as Milan won their first title for 11 years this season.) While Perisic has not quite as decorated a career as Ibrahimovic – although he does have plenty of medals of his own – it is not too much of a stretch to suggest he will be able to bring his own winning experience to Spurs next season.

Because Perisic, after a slow-burning but increasingly impressive career, is now one of the grand older men of European football. After starring for Club Brugge, he made his name in Germany, part of Jurgen Klopp’s Borussia Dortmund team that won the 2011-12 Bundesliga, before moving to Wolfsburg. But it was after leaving Germany to sign for Inter Milan in 2015 that Perisic’s career really took off.

The power of Perisic is that he is a winger who does not look like one, a big imposing athlete who plays with aggression and skill, and ruthless in the final third. He hit double-figures for Serie A goals in 2016-17 and 2017-18, prompting Jose Mourinho to try to sign him for Manchester United.

Ultimately it was at the 2018 World Cup that Perisic transformed himself from a good player to a great one. If Luka Modric was the conductor of Zlatko Dalic’s side, Perisic was the enforcer, always running off the ball, always available and dangerous in the box. And as much as Modric and Ivan Rakitic turned that semi-final against England in Moscow, it took Perisic darting past Kieran Trippier, stretching one of those long legs beyond Kyle Walker, to draw Croatia level.

Then, in extra time, it was Perisic finding the energy to jump above Trippier to win the header for Mario Mandzukic to score the winner.

Four days later in the same stadium, Croatia looked exhausted when they had to play France in the final. But Perisic kept going and even scored a brilliant equalizer, shifting the ball away from N’golo Kante on the edge of the box and slamming left-footed into the bottom corner. Even though Croatia lost the game, it remains one of the great World Cup final goals of the modern era.

GOAL! After the ball bounces around France’s box, it falls for Perisic who takes one touch away from the defender before rifling a left-footed strike past Lloris pic.twitter.com/F5AzIpHUYn

Performing like that in a World Cup semi and final is enough to seal your place in history, but Perisic’s club career has only improved since then. And a big part of that was down to Conte. When Conte arrived at Inter in 2019 he was not convinced Perisic could play at wing-back, so he loaned him out to Bayern Munich. Playing for Hansi Flick’s side, Perisic’s power from wide helped them win the treble, including the 2020 Champions League. Perisic was a substitute for the final, but he scored goals in the knockout rounds against Chelsea and Barcelona.

Back at Inter for the 2020-21 season, Conte succeeded in turning Perisic into the type of aggressive wing-back that is integral to how he plays. Finally in tune with the Conte system, Perisic helped Inter to the 2020-21 Serie A title, after which Conte resigned.

That is a lot of experience, then – three titles with three different clubs, a Champions League, and a starring role at a World Cup – that Perisic will bring to Tottenham. And it makes you wonder, at this club traditionally so focused on youth, when was the last player with this much experience that Tottenham signed? (We are not counting for this purpose Gareth Bale, who returned to Tottenham on loan for the 2020-21 season, before going back to Real Madrid.)

One answer would be Fernando Llorente, bought from Swansea City in the summer of 2017 to be an alternative to Harry Kane. He was 32 years old with a great career behind him at that point: three Serie A titles with Juventus, a Europa League with Sevilla, a fringe role in Spain’s triumphs in the 2010 World Cup and Euro 2012. But even Llorente, as famous as he is for the goal off his hip to knock Manchester City out of the Champions League, came to Spurs to be a glamorous back-up.

Perhaps for a better answer you have to go all the way back to the summer of 2005, when Martin Jol had a young team but wanted to add a bit of nous. Spurs signed Edgar Davids (also, as it happens, from Inter Milan). He was also 32 and came having won three league titles and a Champions League at Ajax and then another three league titles at Juventus. And, as much as Davids offered Spurs on the pitch, his real value to that team came off it.

Speak to anyone who played for Spurs then and they talk about the transformational effect Davids had on the squad. “He was really, really competitive in training and games,” Teemu Tainio said. “He brought a little bit of winning mentality to the team. You need players with a lot of personality in the team, especially when things are not going your way. ”

There is experience in this Tottenham team but it has all been home-grown, the product of Kane, Son Heung-min, Hugo Lloris, Eric Dier and so on having been at the club so long. But Conte knows that to take the next step they need more experience, and they would have to buy that in. This has never been the Tottenham way but now with Perisic coming they have done exactly that. It is still only May but this summer already feels different.