SHAUN GOATER can still remember Erling Haaland running around the Manchester City crèche as a toddler.

And the Maine Road legend believes scoring goals for Pep Guardiola’s champions will be kid’s stuff for the Norwegian new boy.

Goater was a team-mate of Haaland’s father Alf Inge for Kevin Keegan’s City back in the early nineties.

Two decades on and the tot he used to see causing mischief around the players lounge is 6ft 5in and ready to terrorize Premier League defenders.

Goater – who is now back working at his former club as a youth team coach – believes Haaland jr’s return to the club is a ‘match made in heaven’.

He recalled: “When Alfie and I were teammates, a lot of us had kids around the same age. My girls are a similar age to Erling. 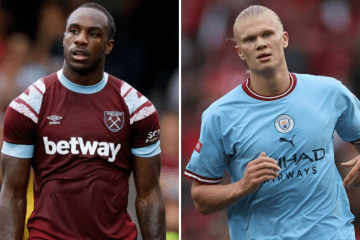 “The players lounge at Maine Road became a bit of a crèche for the babies. All the kids would be running around, with their mums chasing after them.

“I remember young Erling being in there yeah.”

Goater reckons City’s new £51.4 million signing has grown into a man who shares many of the same qualities as his father.

He said: “The one thing I remember is Alfie was a big sigh for us at the time and he brought real professionalism – the way he went about his football was next level.

“And I’m sure all those traits that his father had have gone into his son – and a lot more besides.

“When you look at his father’s qualities, I’m not surprised he’s got a son that has become the world’s best striker.

“That’s why he was wanted by every club in Europe. We are pleased that we got him and I’m very confident he will score goals.”

Alf Inge has been helping to represent his son during talks about his future and has been with him during his first weeks in Manchester.

Goater told Sunsport in the autumn he was willing to speak to his old mate if it helped his club get their man.

Yet in the end he didn’t need to as he always felt Haaland was destined for the Etihad.

He said: “I never actually spoke to him but I always felt quietly confident. I never had any doubts he’d come.

“Even if his father hadn’t played for City I think it would have been an easy decision.

“Whenever anyone asked me I always said it was a no-brainer for him to come here.”

Goater believes City could have found the missing piece to help them finally crack the Champions League – and at a knockdown price too.

He added: “You talk about £51 million and you are probably looking at the best striker in the world – or one of them. It’s an absolute bargain.

“There was a period when I thought ‘do we really need a striker?’ because we were playing so well, the football was so beautiful.

“Everyone was scoring. But then the chance to get Haaland came and I’m all over that.

“There are times in games when I think a striker would love that cross, or to be in that position, to be slid through there.

“I think it’s a match made in heaven, I really do. I’m looking forward to it.

“We hope he can be the missing piece. His record in the Champions League is absolute quality.

“That will be what we are looking for – for him to deliver those goals in the key games.”