YOU WIN OR you learn.

“You don’t play with revenge or making amends [in your mind]”, says Shamrock Rovers manager Stephen Bradley, “it’s about learning and moving on quickly, and making sure it doesn’t happen again.”

Rovers are once again on the cusp of group stage football in Europe, just as they were a year ago. Having been knocked out of the Champions League by Slovan Bratislava, Rovers dropped into the Conference League qualifiers and having beaten Teuta of Albania, were fancied to progress through the play-off round before being sucker-punched by Flora Tallinn.

Rovers have spent the last few weeks turning their way around Europe again, and tonight they welcome KF Shkupi of North Macedonia to Tallaght for the first leg of their Europa League third qualifying round tie. Progress in this tie will guarantee them a spot in the Conference League group phase at worst, as that’s the consolation prize for losing the Europa League playoff against Qarabag or Ferencvaros. (Should they lose against Skopje, they will play off against either FC Ballkani of Kosovo or Klaksvíkar of the Faroe Islands for a spot in the Conference League.)

To capitalize on this latest chance, Rovers will have to continue learning from past mistakes. Last week’s win at home to Ludogorets was encouraging in that regard. Having been beaten 3-0 in the away leg, Rovers gave their Bulgarian opponents an almighty scare in winning 2-1. Bradley was rightly proud of his players’ performance having been scathing a week earlier, lamenting the concession of a third goal with the first leg’s final act. The players were the architects of their manager’s disgust, with Lee Grace giving the ball away cheaply on the left flank and then watching as Igor Thiago’s shot pinballed off Sean Hoare and into the net.

“For a few days after that I was kicking myself”, admits Grace. “Not just because I played the free but us in general as a team, someone had to say, ‘kick it long.’ To be honest, I didn’t know what was left. Hindsight is a great thing and looking back now, if I knew there were 30 seconds left I would have kicked it. That is what it is. It’s hard to shake off but you have to forget about it, learn from it and move on.” 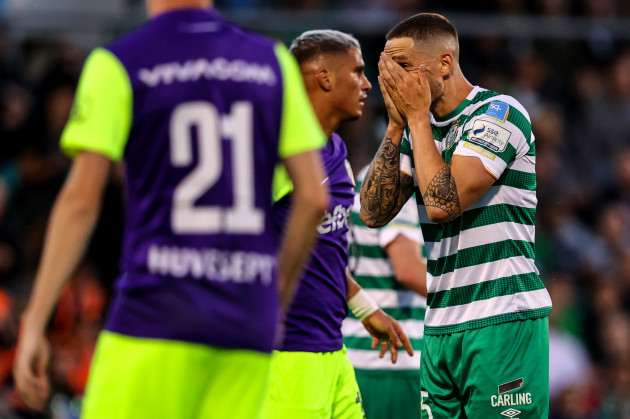 Lee Grace reacts to a missed chance in the home meeting with Ludogorets.

“If you do that in the league game, nine times out of ten you probably get away with it”, continues Grace. “But they turned it over and the ball is in the net within 20 seconds. You just get punished.”

Grace will likely have a new defensive partner for this game in Dan Cleary, signed last week after he left St Johnstone and Roberto Lopes was ruled out for two months with a knee injury. Jack Byrne, meanwhile, who has played all of 20 minutes of football since mid-May, is rated as 50/50 for tonight as he shakes off a hip flexor issue. New signing Simon Power is expected to be absent.

This is a golden opportunity for Rovers to progress to the Conference League at worst. Skopje’s domestic season has not yet started, meaning they are not humming to the extent Rovers are. They are in the Europa League having been knocked out of the Champions League by Dinamo Zagreb, albeit narrowly: a 2-2 draw in Croatia was followed by a 1-0 loss at home. In the previous round they beat Lincoln Red Imps of Gibraltar, although they made it curiously difficult for themselves. Having won the first leg 3-0, they crashed to a 2-0 loss in the return game.

“Very similar against Lincoln, away they were poor and at home they won the game 3-0. But anyone who can run Dinamo close – I think we saw Dinamo’s quality yesterday against Ludogorets – shows they’ve got real threats we’ve got to respect.”

They have to show North Macedonian football the respect that eluded Irish national teams in the 1990s, when a 3-2 loss in 1997 led to the worst Irish player in training being forced to wear a shirt bearing the writing, ‘I had a Macedonia. ‘

Humiliation was followed by heartbreak, when Macedonia scored a late, late equalizer to deny Ireland automatic qualification for Euro 2000. The Shkupi manager, Goce Sedloski, played in both of those games – they were two of his 100 appearances for his national team. 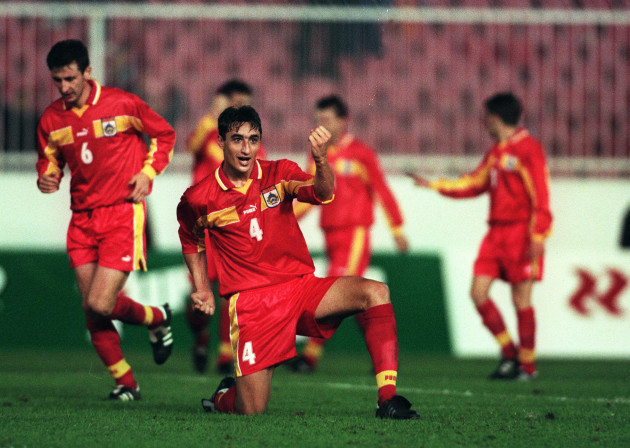 His squad are much less familiar. Only goalkeeper Kristijan Naumovski was among the North Macedonia squad that shocked Italy in the World Cup play-offs last year. (And he was on the bench.) Rovers will be aware of striker Pepi Gjorgiev, however, as he made substitute appearances for Teuta in both legs against Rovers in last year’s Conference League qualifiers.

Skopje were formerly known as Sloga Jugomagnat, whom Shelbourne beat 1-0 away from home in 2000, which ended a remarkable 17-year run without a European away win for Irish sides. With the addition of the third-tier Conference League, and Sligo and St Pat’s progression within it, those fallow years are a thing of the past. In fact, one win for any of three Irish sides over the next fortnight would make 2022 the joint-most successful year for LOI sides in Europe ever.

Get closer to the stories that matter with exclusive analysis, insight and debate in The42 Membership

Rovers are the most fancied of the trio to take another step for the League and a giant leap forward for themselves.

“It doesn’t bother me what’s said outside”, says Bradley. “It’s always been that way. As you said, last year as soon as we were drawn against Flora people said ‘Oh they’ll make the group stages’ without actually understanding how good they were and how good their manager was. We just focus on these and any team that can do what they did to Dinamo over two legs is a team that you’ve got to respect and that’s all we’ll focus on. People on the outside will talk and have an opinion and that’s fine but it hasn’t bothered us to this day and it’s not going to start now.”

Rovers aren’t listening, but tonight they’ll settle for not learning either. Winning is now the primary job.