PACK YOUR BAGS
Easy to forget sometimes, but there are other sports besides football. And some of those other silly little pursuits are having some of their bigger events at the moment, bless them. There was something called the British Grand Prix, for instance, which is a car race. Although that sounds interminably dull, everybody was suddenly very interested in it because there was the perfect outcome of a really dramatic and massive crash but in which nobody was hurt which means it can be enjoyed guilt-free. There is also the annual celebration of Englishness that is Wimbledon, where the latest great British hope Cameron Norrie – born in South Africa, raised in New Zealand, educated in Texas – is through to the quarter-finals as Henman Hill becomes Norrie Knoll.

There’s even a Test match where Jonny Bairstow has scored one of those hundreds he scores all the time now.

We are, in essence, slap bang in the middle of what must by tabloid law be referred to at all times as the Great British Summer of Sport. A wild and confusing fortnight or so when football, in the absence of any actual football, has to fight for back-page space.

Everywhere, that is, except the Daily Star. Not for them the thrills of crashing cars or plucky Brits in SW19. Not when there’s some spurious spaff about Ronaldo to tuck into.

And what a job they’ve done with it, luring us in like the clever sausages they are with a headline that declares “United tell Ronaldo to pack his bags”. Hang on, this is fair enough as a back page. We happen to think this is precisely what United should be doingsoft all other reports suggest that they are determined to dig their heels in and continue to insist that the fading superstar is not for sale. If they’ve told him to bugger off, then that really is something.

“Cristiano Ronaldo has been told by Manchester United to be on their pre-season tour this week – despite his desire to leave the club.”

United front
Manchester United continues to be the only game in town and in The Sun we find the traditional “new manager has really made an impression in training” puff piece built entirely on information from a “source”. Has there ever been one of these stories a week into a high-profile managerial reign saying the opposite? “The players are all miserable and bored under the new manager, he’s really brought the mood down. It’s all frowns.” We’d be far more interested in those stories to be honest.

Anyway, this one has all the usual bits about the improving mood and a desire to play attacking football but there are also a couple of funny bits. A bit about Ten Hag urging players to improve their body language goes through the Sunglish translator and comes out as a determination to “ban strops” which makes Ten Hag sound less like a football manager than a doomed and exhausted parent of a two-year- old who Just. Won’t. list.

But the more interesting actual meat of the story, given that the source is clearly from within Manchester United, is that Ten Hag’s plans aren’t actually going that well so far because the United players are too rubbish. They’ve buried the lede here, frankly. Were the purpose of this story anything other than puffing up United and the new regime, this stuff would be front and center under a headline about “United players struggling to cope with Ten Hag’s philosophy” or some such rather than the actual “all smiles” English that’s been taken. Look at this…

“The quality isn’t there just yet because it’s early in the pre-season.

“Plus, it requires a lot of practice to build up the levels of quality needed for such a strategy.

“Some players have struggled with their touch and their passes, but Ten Hag and the rest of the coaching staff have been encouraging.

“Lots of the players had a really bad end to the season and then it’s tough to relax and unwind over the summer as they are frustrated.

“Some weren’t looking forward to coming back because the dressing-room mood has been bad, but that fog has lifted and they are enjoying themselves again.

“There is a spring in everyone’s step and they feel united.”

A lot of this sounds… quite bad?

There’s also plenty of stuff here that is purportedly meant to be praising Ten Hag but is about things so fundamental and obvious and basic that it is impossible to read it in any way other than as an attack on the competence of previous managers Ole Gunnar Solskjaer and Ralf Rangnick.

The only conclusion is that none of these things were true last season. Which does, admittedly, explain quite a lot. 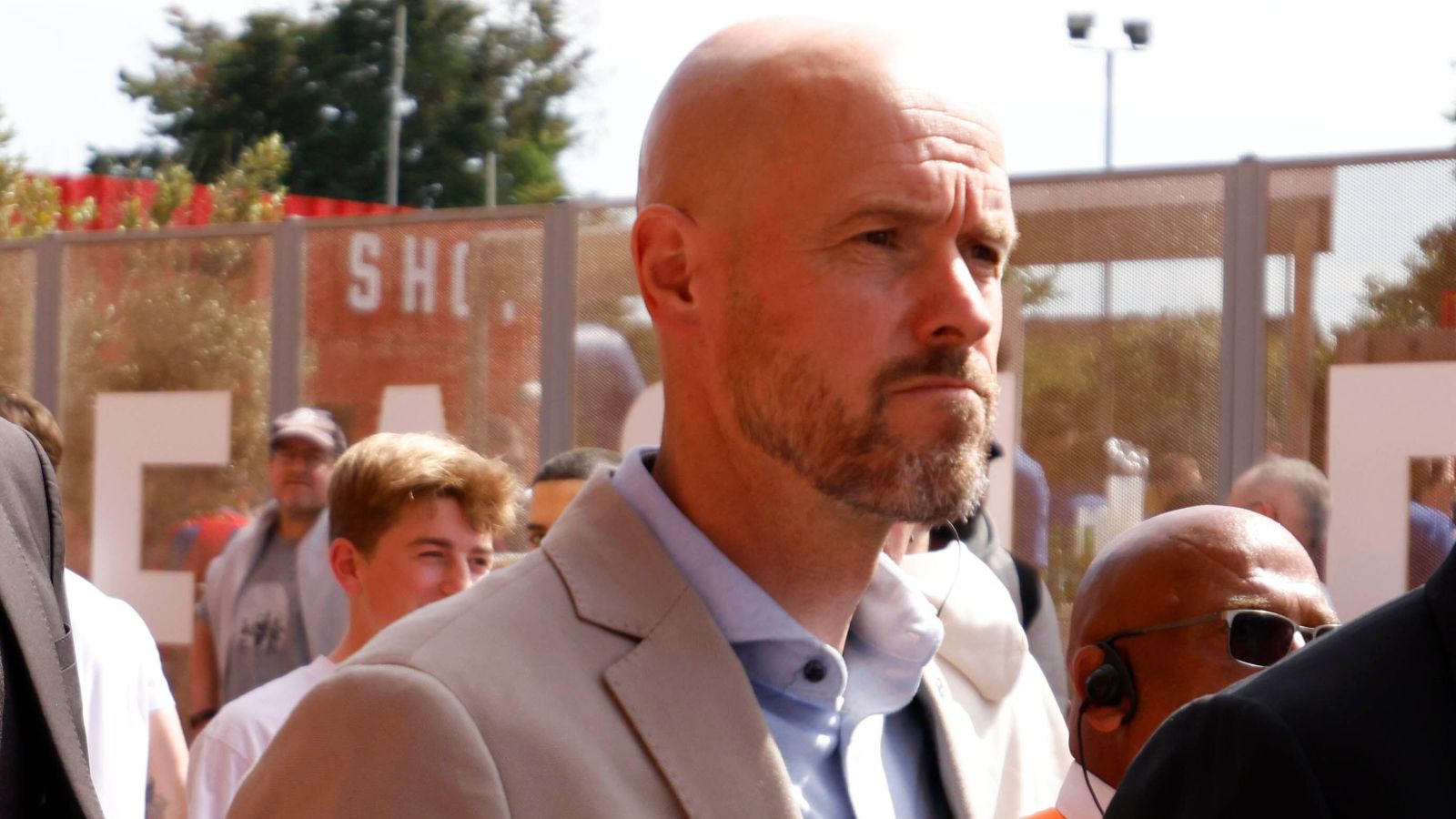 Card 3
That’s not the biggest Ten Hag news in Medialand today, though.

We would go into more detail about this but frankly we can feel the life force ebbing from us as we read it and simply can’t be bothered. The man wore the same cardigan for three days and that is quite literally it.

Poo-based news story of the day

Polish newspaper Super Express has an “Exclusive’ today about Jan Bednarek’s dog having a poo, and the player putting the poo in a poo bag.

‘We appreciate that Bednarek cleans up not only in the penalty area!’

Make of that what you will. pic.twitter.com/NLLnlrMZKs

Lucky number 7
It’s entirely possible that we just hadn’t paid attention previously, but this summer feels like the start of a trend in which shirt numbers – specifically “dream shirt numbers” – are portrayed as significant factors in whether or not a transfer will happen. This seems like the worst kind of nonsense, and yet they are everywhere. In the last month, we’ve had:

And many, many others.

Today, though, we may have reached peak ‘dream shirt number’ idiocy.

Now it’s quite something that the daftest thing about this headline isn’t misspelling the name of a £70m Manchester United target.

First of all, that “dream shirt number” isn’t actually available at the moment, because it’s number 7 and Ronaldo still has it. Thinking about it, was the rule-mangling manner in which Ronaldo was allowed to get the No. 7 from Edinson Cavani last summer actually the birth of Dream Shirt Number as a transfer English? Further investigation needed here.

But while CR7 was a very, very established thing and clearly if we must accept there is such a thing as a DSN then Ronaldo 7 would qualify. Is this remotely true of Antony, though? Is there any evidence that he considers the availability or otherwise of the No. 7 shirt as a potential transfer deal breaker?

“With Ronaldo gone, the Brazilian could well be entrusted with the no. 7 shirt with the Red Devils.

“While he is the current occupant of the No. 11 shirt at Ajax, he has elected to wear the iconic number in the past with former club Sao Paulo as well as on the international stage with the Brazil U23s.”

But at least we know he would have a clear run at the No. 7 with no Ronaldo around.

“He might however face some competition for the number. Last summer’s most expensive arrival, Jadon Sanchowas understood to be keen on donning the number following his switch from Borussia Dortmund.”

Oh. But at least we know someone new will get that No. 7 with Ronaldo definitely on his way.

“Of course, the passing on of the No. 7 shirt once more relies on Ronaldo leaving the club… but the Red Devils remain determined not to sell.”

Ah. Still, never give up on your dreams.