Adrian Dennis has traversed the world in pursuit of sports photography, his career and life for 30 years. From World Cups to Ashes tours, Olympic Games and Wimbledon, one of the golden rules of the job is to avoid making assumptions about what the story will be.

Last Sunday at Brentford was an exception to that rule, as shown by the entire corps of match-day photographers migrating towards the away end before a ball had been kicked.

Brentford were safe from relegation on the final day of the Premier League season and in the nicest possible sense, no one cared about them. Leeds United were not and, as a consequence, cameras pointed their way all afternoon, looking for tears, jubilation or whatever the 90 minutes provoked.

Dennis, a staffer with Agence France-Presse (AFP), had given up on the football itself as stoppage time arrived. By that stage, results at Brentford and elsewhere were going for Leeds and the away end was starting to bounce, whipped up by the scent of survival.

“I made a decision to forget about what was happening on the pitch,” Dennis says. “I’d got some shots of the game – Raphinha’s penalty, a few other moments – but I hedged my bets by focusing on the fans and ignoring the last few minutes (of play) completely.

“For a photographer, the story of the day is usually not clear-cut. On Sunday, all of us were at the away end because we knew what we were looking for. But even then, the unexpected still happens sometimes. ”

Dennis was in prime position at the final whistle as Leeds, in celebration, swarmed towards one corner of Brentford’s stadium. He was ready to react when the visitors’ Brazil forward Raphinha surprised everyone by clambering into the away end. Numerous fellow snappers had full view of it too, many of them capturing the same shot, but it was Dennis’ version that caught fire online: a shirtless Raphinha halfway up the stand, elevated above the gleeful fans around him (he was standing on a wall dividing its upper and lower sections), abdominal muscles rippling and a Brazilian flag swinging around his head.

That was it, the crowning moment; the meaning of the entire day frozen in time.

“I was rushing to get the photographs back to my desk so when I first looked at it, I was scrolling on the back of my camera, looking at a one-inch screen,” Dennis says. “It was the one that jumped out at me but, because of time pressure and everything else, you send it through and carry on.

“When he went into the crowd, I was aware that something good was happening. There was sudden movement as soon as I spotted him. I knew that was the picture. Players do not often do that, there are so many rules about encroachment these days. Those moments can be few and far between. ” 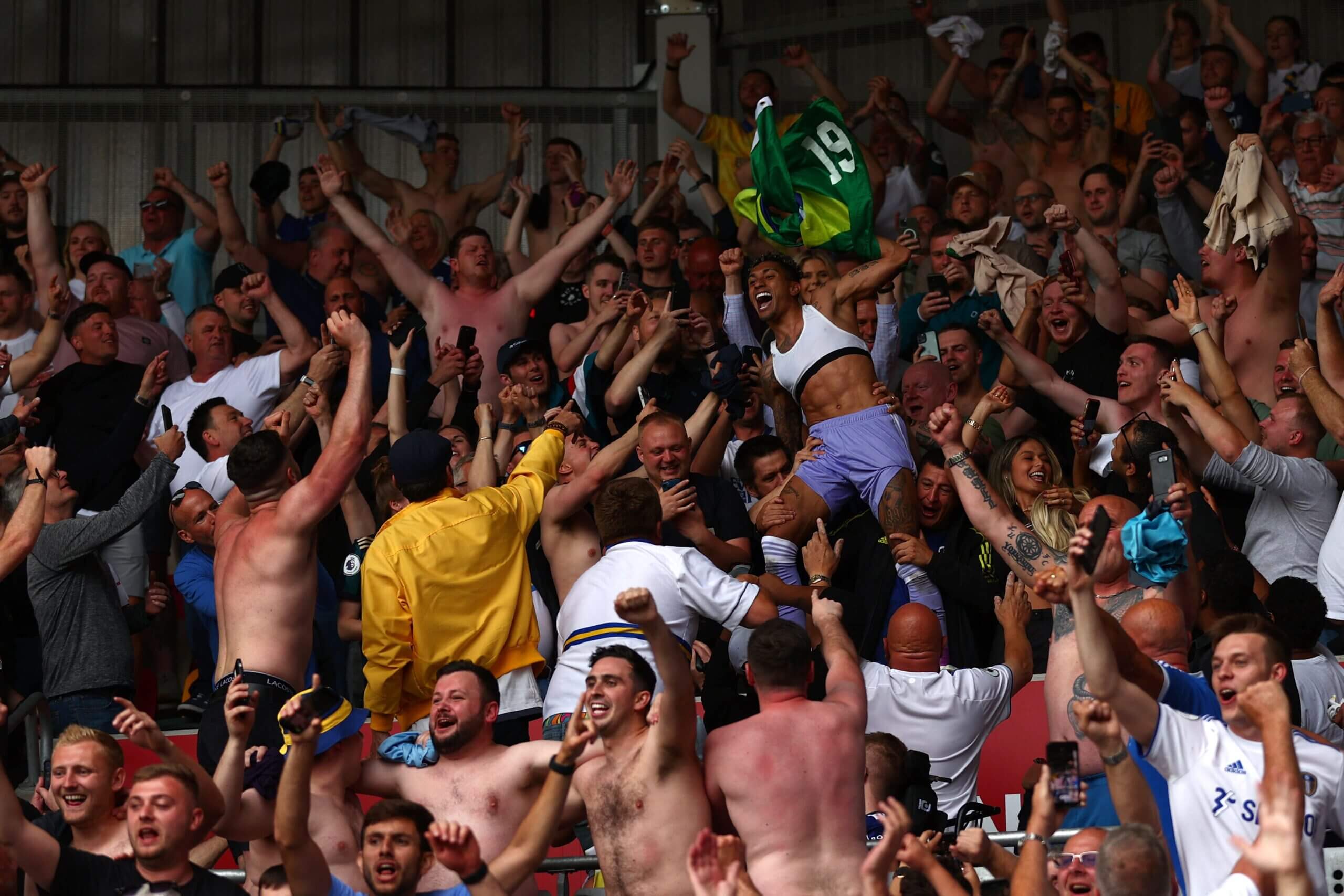 Filters were quickly added to a version on Twitter, giving it the look of a renaissance painting.

Someone likened it to Madonna of the Rosary, a painting completed by the Italian artist Caravaggio in the early 17th century, depicting the Virgin Mary on a throne with Jesus in her arms and people on their knees in front of her. In Dennis’ photo, Raphinha’s partner, Taia, is smiling brightly to the right of him and it was Taia he had sought out after the final whistle, scaling a fence between the sections and helped over that wall by the supporters around her. The orchestra is out of control and Raphinha is the conductor.

Ross O’Connor, a 30-year-old Leeds fan from Dublin in the Republic of Ireland, is at the front of the image, bare-chested with one fist raised. He had the job of supporting Raphinha’s right foot as the Brazilian scaled the fence at the back of the lower tier.

“He appeared from nowhere,” O’Connor says. “It was crazy at full-time and to start with, I was keeping my eyes on Kalvin Phillips, to see his reaction. Then there was this commotion and, before you know it, Raphinha’s there, right next to us. 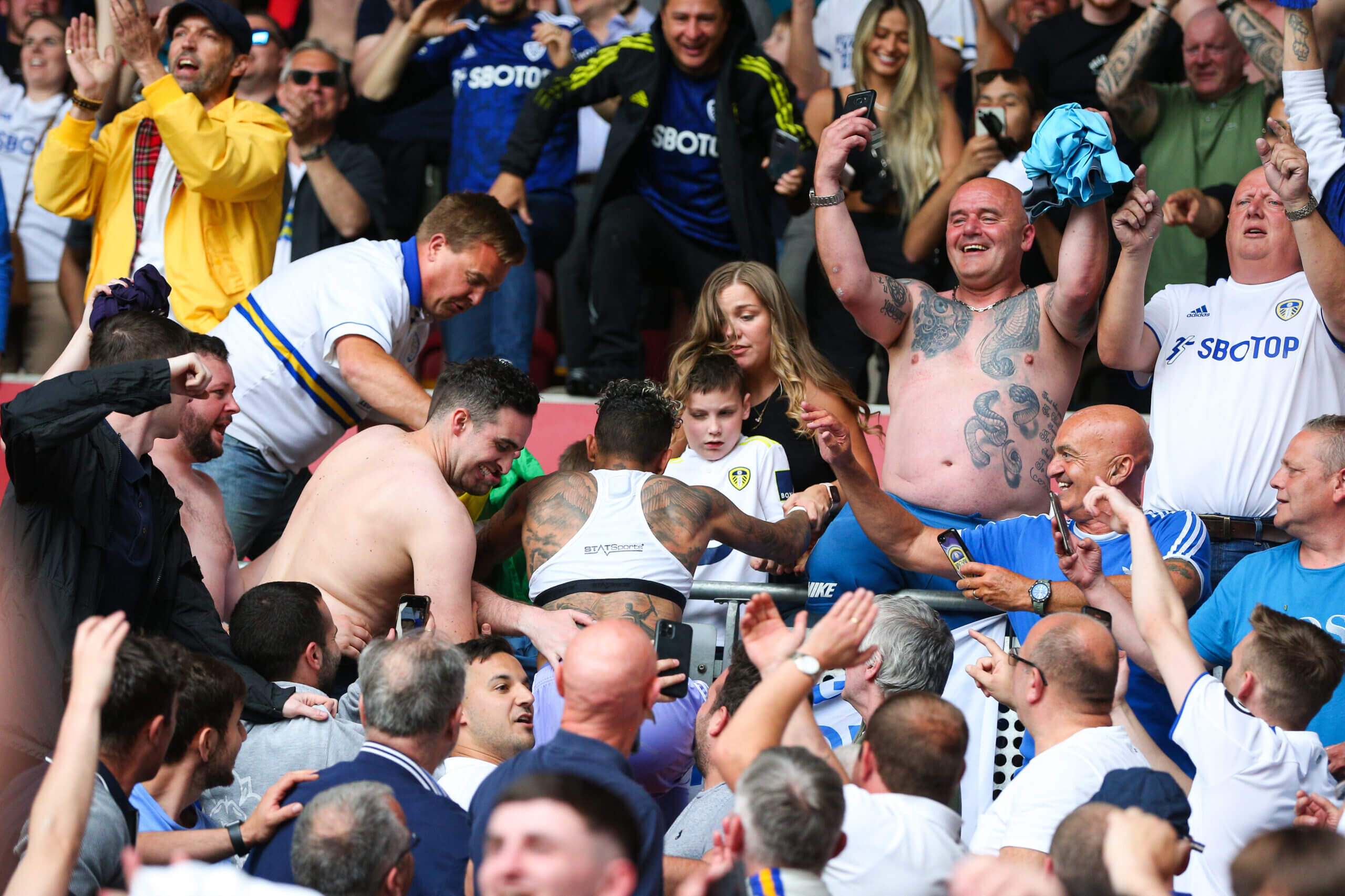 “He had to get over this wall, this fence, so I helped to lift him up, pushing his right foot. It’s only today that I’ve thought to myself, ‘I’m pleased I was careful, that bit of him’s worth a lot of money!’. We’d realized early in the game that his girlfriend was sitting behind us so it was pretty obvious where he was going, but it didn’t feel real. I thought he’d get mobbed – absolutely mobbed. But to be fair, and because it was such a surprise to see him, people actually gave him some space. ”

O’Connor’s phone was out of battery by then so it was not until Sunday evening that he twigged about an image that was racking up likes on Twitter by the thousands.

“When I switched the phone on, it was message after message,” he says. “The pictures had gone everywhere and everyone was saying, ‘That looks like you…’. The only downside of it was me and my bare chest.

“It’s a shame I don’t have a stomach like Raphinha’s.”

Further back in the stand, Jay Wright, a 33-year-old greenkeeper from Maidenhead in Berkshire, ended up with Raphinha standing next to him, close enough to see the finest detail of his tattoos. Wright is also there in Dennis’ photograph, face virtually hidden but 1992 vintage Leeds shirt clear to see and phone in hand. He captured a video of Raphinha, stripped down to his white GPS vest and twirling that Brazil flag, which spread as widely on social media as Dennis’ photograph.

“As soon as I saw him, I grabbed him and shouted something like, ‘Gracias, Raphinha!’,” Wright says. “I was not really sure what to do except hug him – and then eventually get off him.

“I had no idea he was heading our way until he was right beside me. I hadn’t seen him climb into the away end. I’d seen someone with a white vest coming through the stand and my first thought, stupidly, was, ‘He’s got hair just like Raphinha’. Then it was a case of, ‘Oh my God, it is Raphinha! ‘.

“It’s just about the most surreal moment of my life.

“Since then, it’s been non-stop notifications. I was on Raphinha’s Instagram story, on Sky Sports, everywhere. It took until the train home for me to get my head around it, the thought that someone who could go on to be a massive superstar was right there with us. What made it more special for me was my obsession with Brazil when I was a child. I was Brazil-obsessed and my favorite player by a million miles growing up was Ronaldo – R9. I’m a closet follower of theirs, which makes the player more special too – Leeds and Brazilian. ”

A later frame of Raphinha embracing Taia, taken by Craig Mercer for MB Media and Getty Images, shows Wright more clearly, right behind the couple in the white Leeds shirt with sunglasses tucked in the collar – and there’s O’Connor, bottom left, still punching the air. 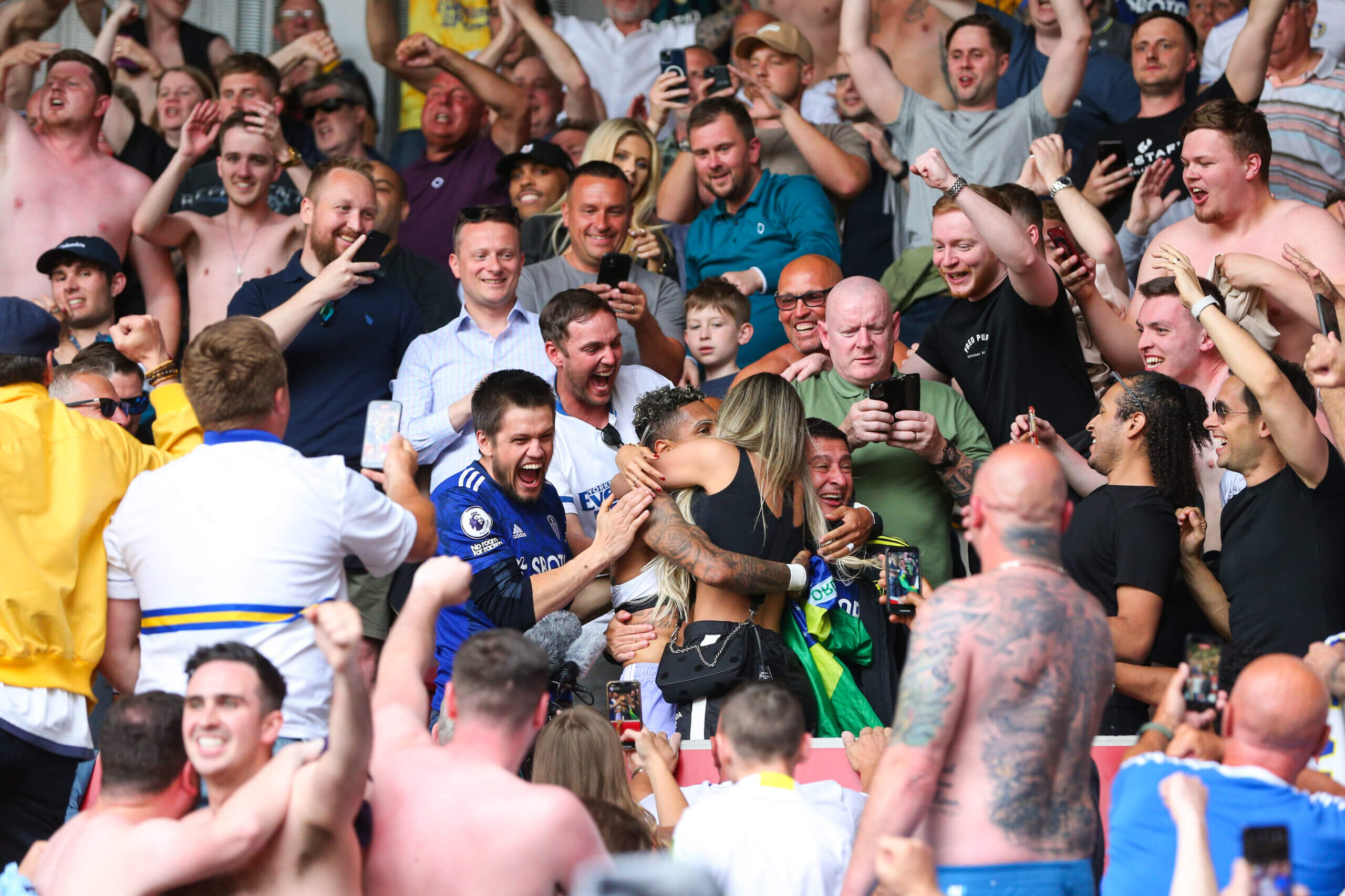 The season just gone was horrible for Leeds, a year of decline that cost beloved head coach Marcelo Bielsa his job and very close cost the club their place in the Premier League after just two years back following 16 agonising campaigns in the second and even third tiers . Yet Sunday created memories for life, improbably making a dreadful campaign almost loveable.

Raphinha’s appearance against Brentford might be his last for the Yorkshire club, with plenty of summer transfer whispers swirling, but Dennis’ image of him is a romantic one, oozing the sensation that football is supposed to inspire.

O’Connor and Wright both agree that they emerged from that tense final day with affection for a year which, until last weekend, everyone of a Leeds persuadion, to a man and woman, had hated. Their 2021-22 season became a sporting version of Stockholm Syndrome.

“I’ll 100 per cent remember it for the right reasons now,” O’Connor says. “I did not enjoy the game at Brentford. There was loads of false information about what was happening at Burnley (whose result against Newcastle at home Leeds had to better), what the score was. But in the end, it feels like one of your best days following the club. You can see that in the photo, what it means to all of us. And Raphinha as well. ”

Wright went home thinking the same. “For me, it completely transforms my outlook on it,” he says. “It’s not been a good season but in the end, we got the day at Brentford.”

The aftermath of the game was the Raphinha show: the winger in the away end and then traipsing the length of the pitch on his knees – an apparent thanks to God for delivering Leeds from relegation. He finished with a team-leading 11 league goals, and the club’s Player of the Year award can only be his.

“The photo of him, everything about it appealed to me,” Dennis says. “You’ve got his huge, beaming smile, the juxtaposition of the flag twirling around his head, the faces, and the reaction around him.

“I’d had a wide-angled lens on the away end during the game and all you saw were faces going through torture. That picture is the opposite and on a day like that, you’re looking for something like it. “

Dennis’ only hope is that if Raphinha is destined to sign elsewhere this summer, he signs him a copy of the photo before he goes.