James Tavernier was defiant in the face of adversity after the defeat to Frankfurt in the Europa League final: “This is not the end of us. This is the start of something special with this team, ”he said.

“We want to be building from this to make the fans proud and really push on from this moment. With the squad that we’ve got, we’re always going to continue to build on it and bring players in. “

They were reassuring words after a crushing defeat, and winning the Scottish Cup three days later added a second trophy for this group, but how much substance was behind the sentiment was up for debate.

With four senior first-team players out of contract and five others entering the final year of their deal – three of them the club’s top assets – it looked like a rebuild was on the cards, but the announcement on Wednesday that vice-captain Connor Goldson had committed his future to the club until 2026 single-handedly changes the dynamic of this summer transfer window.

The decision to extend the contracts of Steven Davis and Scott Arfield by another year, with Leon Balogun and Allan McGregor also both under offer, means a rebuild now looks set to be a refresh.

As reported last summer, the contract stand-off between Goldson and the club was never going to end with him being prematurely sold for fear of losing him this summer as a free agent. Rangers valued his contribution too highly and judged fetching a fee of a few million pounds would be outstripped by the revenue he could help deliver via on-pitch performance.

They ended up with the best of both worlds as he was key to their run to the Europa League final, which brought in over £ 35 million, and they retained his services for the remainder of his peak years.

It had been expected that Goldson would leave on a free to go back down south and be closer to his family but Rangers were still hopeful that he would commit this week as he has grown to love the club. If replacing a leader who is an ever-present with someone only as good was going to take millions, then the value in going slightly higher in his contract to make him one of the top earners would be worth it.

At 29, Rangers can now plan having both Goldson and Tavernier around into their thirties. They form the right half of the defense and have made 222 and 346 appearances respectively in light blue.

Their reliability as ever-presents gives Giovanni van Bronckhorst a solid base to build on but he will be looking to add at least two or three starting players, excluding if any players are sold. 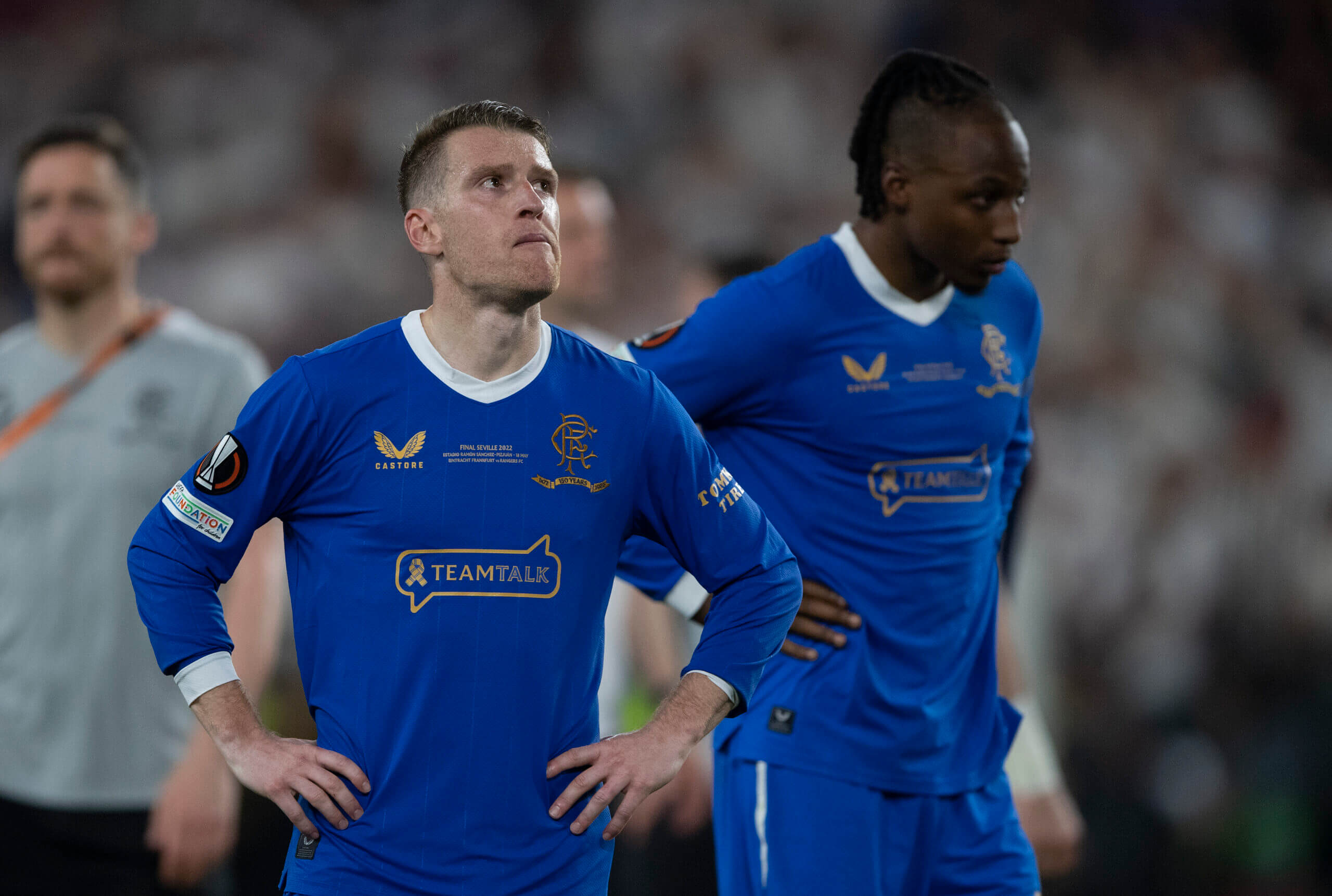 Van Bronckhorst’s success in masterminding the flight route to the Europa League final and then winning the Scottish Cup has given confidence he can improve them further if he can bring in players tailored to his style of play.

He had a virtually identical points per game return (2.3 per game) from his 25 league games as Steven Gerrard in the first 13 of last season. The difference in outcome was simply that Gerrard was up against a Celtic side in its infancy and, by new year, Ange Postecoglou had reinforced a side now familiar in their style of play, which saw them go unbeaten from late September until the end of the season.

How much money will Van Bronckhorst have to play with, though?

The reality is he does not have a big pot to dip his hands into this summer, but there is understood to be cash to bring in an undisputed first-team starter. A second may require a meaningful sale but Van Bronckhorst was aware that the parameters were tight when he joined in November.

He did not shy away from working within similar constraints at Feyenoord where he blooded young players and that is a big target of sporting director Ross Wilson.

Raising more funds from existing investors is likely to have a limited ceiling so player sales may be the way to ensure they can give Van Bronckhorst the funds to refresh the squad properly.

When it comes to the prospect of trading in order to free up funds, there is a belief from certain figures that they need to put pressure on themselves to play out the model and that may mean Wilson has to be proactive this window in selling top assets .

Rangers will not sell below what they think their players are worth as there are some who could go to the English Premier League and improve most teams, in the bottom half at least. Fetching eight figures and above for any combination of Calvin Bassey, Glen Kamara, Joe Aribo, Ryan Kent and Alfredo Morelos would free up significant funds, though the timing of their moves in the market may be just as important.

They have made a quick start to the window in tying down experienced faces to provide continuity, which may be even more important if some high-value players do leave. Cedric Itten has also been sold after an underwhelming two seasons at Rangers, moving back to Switzerland for a reported. 1.5 million which represents a loss on the fee paid to St Gallen in 2020 but still recoups a sizeable chunk of the outlay.

What helps Rangers this year when it comes to planning is that for the first time the board has budgeted for European group stage football at a bare minimum as if they drop out at the third round of qualifying they will enter the Europa League group stage.

Until now, the financial budgets have never gambled on Rangers coming through qualifying given there have been several hurdles in their way, but there has also been an acceptance that the financials do not work unless Rangers are at least in the Europa League.

Their focus is very much on securing Champions League qualification for the first time in 12 years. Overcoming the two rounds of qualifying that begin in August returns the conversation to the question of whether they overinvest or back the existing players to do the job.

Last year they were eliminated by Malmo after entering qualifying without the momentum and positive mood that may have been expected following their league triumph. Guarding against a repeat may mean a change in how they approach this summer but that is a balancing act of just how much the board are willing to take.

Their business plan to get Rangers back to the top of domestic football was based on ‘overinvestment’, the idea that you have to speculate to accumulate. It is the same dilemma Celtic’s decision-makers faced for years as they came in for criticism over their tendency to wait until they knew what competition they would be competing in before they started to spend on transfers.

The other option is to invest in the team and provide Van Bronckhorst with two starters in time for them to be ready for the qualifiers, in the hope that the additional quality propels them into the group stages and delivers the hugely important funds that would pay the investment back multiple times over.

The risk with that is always that they fail to qualify but there would still be the rest of August to move on another valuable player if needed to balance the books.

It is thought that with the money generated from the sale of Nathan Patterson to Everton (although it is not all up front), the compensation for Gerrard and his team joining Aston Villa and the Europa League revenue, it will see Rangers in the black for the first time in over a decade.

That is where they need to be, but they also need to put a winning team on the park and that means there will be movement this summer.

Where will they look to strengthen?

Rangers specifically scouted athletic players last summer to add attributes they believed they were missing. John Lundstram and Fashion Sakala ticked that box, with the former developing into a key figure and ensuring the club are continuing to bring in players with the physical profile to compete at the top level but also to be sold on to the most competitive leagues.

In terms of positions, a right-winger is a target as Van Bronckhorst plays with width and only Kent, Scott Wright and Sakala fit that bill.

Goldson’s renewal lessens the need for a center-back but a left-back could also join as Borna Barisic has not hit top form and a new contract has not been discussed yet after Rangers rejected a £ 2 million bid from Watford.

The arrival of John Souttar provides Van Bronckhorst with the skillsets to deploy a back three. Souttar’s ability to drive out from the back gives them a new dimension, Goldson’s diagonals and smart positional sense can hold the shape together and Bassey’s pace and aggressive overlaps could add a double threat down the left.

Who could go for big money?

The futures of Aribo, Kent and Morelos are especially delicate this summer given this is the last window Rangers can get a big fee for them before their contracts expire next summer.

It is understood there is serious interest from Crystal Palace in Aribo, who is deemed to suit what they are building in his home of south London, but Morelos may be open to prolonging his stay as long as the terms are not prohibitive for Rangers.

Kamara and Bassey have plenty of time remaining on their deals so it would take serious money to allow them to go but the former may represent ideal timing if his Europa League performances have elevated his status, while the latter is not seen as indispensable.

Which youngsters could be part of the core squad?

Leon King and Alex Lowry were introduced into the first-team squad last season and both impressed but the upcoming season should be about them being one of the options for their position.

Rangers need to ensure the path is not blocked due to not freeing up enough space. Jack Simpson will be allowed to leave and Nikola Katic will return to training but is unlikely to break into the top options with Filip Helander available.

Further down the academy, 16-year-old striker Rory Wilson is expected to leave for Aston Villa in the coming weeks, but the outside focus is on Van Bronckhorst and how he molds the team into his full vision.