Rangers fans who attended the club’s heartbreaking Europa League loss to Eintracht Frankfurt have vented their anger at “shambolic” conditions in Seville on Wednesday last week, with suncream seized from fans who were forced to “drink from bathroom taps”.

There had already been complaints before the final that the stadium hosting the game, the 43,000-capacity Estadio Ramon Sanchez-Pizjuan, was too small.

It meant both Rangers and Eintracht only received around 9,500 tickets for their supporters, although a number of Scottish fans obtained tickets through other means.

But those who made it into the ground had an appalling experience, with claims of overzealous policing and a lack of food and water that led to people fainting.

The problems began outside the ground, where relations of players were caught up in four lines of police checkpoints, which caused alarm and confusion.

“I saw kids being crushed as people were being pushed back by police. Ours was one of them and they were all crying, ”said the parent of one player.

Another fan had a similar experience, adding that some police “booted into people”. Another fan told The Athletic that there was “zero communication and people were being funnelled down random streets to be greeted by cops with riot gear and on horseback.”

Season ticket holder Scott Hone attended the game with his friend but he had items taken from him that had been officially declared acceptable.

“It was a shambles,” he said. “They just crowded us together like animals at every checkpoint and, in that heat, it was murder.

“There was no order to it all. The first point was just three police on horses not letting anyone through, the second one just a line of officers, the third was a steward to activate your ticket then the fourth was a police search where they chucked everything. That was before you got to the turnstile.

“I had a battery pack, a bottle of water, suncream and a charging cable taken from me. I asked why and showed him the ticket where it says battery packs are allowed but his only response was to shove me and say: ‘Put it in the bin’.

“I later spoke to a Scottish steward who must have been helping out and he notified me that most of the police were drafted in from other cities and that the battery packs were being discarded as they could contain bombs.”

Gavin Shearer, from Caithness in the north of Scotland, extended a pre-booked family holiday to attend the game himself.

He also entered the stadium lighter than he intended.

He told The Athletic: “They were binning folks’ earbuds and they binned my phone charger. I only just got on my flight home with 10 per cent battery to access my boarding pass.

“The cops seemed to be taking great delight in binning everything and four UEFA nobodies stood and watched.

“I was so livid I took picture of them all as that’s what annoyed me the most. I had a genuine complaint and he just munched on crisps and smirked.

“His colleague then tried to force the phone out of my hand and that’s when I panicked and went to the ground before I got into bother, as you could tell you were never going to win with them.”

But the experience of Rangers supporters became more dangerous when they made their way into the ground.

Ross McAdam was sitting in section N21, high up behind the goal at the Rangers end, and concurred with widespread reports that all the kiosks were shut.

At other parts of the ground, some fans say one kiosk was open but could not service the number of fans and all that was available was a half-cooked hotdog and Fanta, before it was soon closed.

“We all resorted to grabbing discarded bottles and cups and drinking out the bathroom taps,” says McAdam.

“I tried to just throw water over myself rather than drink it to cool down but ended up having to give in and just drink it. It was rank but we had no choice.

“A few people started fainting in there and I saw one in a really bad way after the game, walking back out. It was bad. I’m amazed no one died. “

Zack Birnie traveled from London for the match along with his dad and his friends’ families.

“The water situation was bad,” he said. “My dad was struggling with his diabetes and there was nothing open after the game either, so we walked and waited 35 minutes for a drink of Coke.”

The heat in Sevilla was almost 40 degrees Celsius at the start of the game. After being advised to arrive at the stadium three hours before kick-off at 6pm, it meant some did not have anything to drink until after midnight when the game finished.

“I’m surprised there were no fatalities if I’m honest,” says Ryan Gemmell, who witnessed a concerning scene in a toilet in the lower tier.

“I walked to the toilet and there was a guy on the ground and people were shouting for water. The stewards weren’t bothered at all.

“Even inside, me and my brother were three rows from the front and there were people standing on the stairs. It’s a nice stadium but it was run very badly. “

A female Rangers fan meanwhile told The Athletic that the women’s toilets were overflowing with no running water. 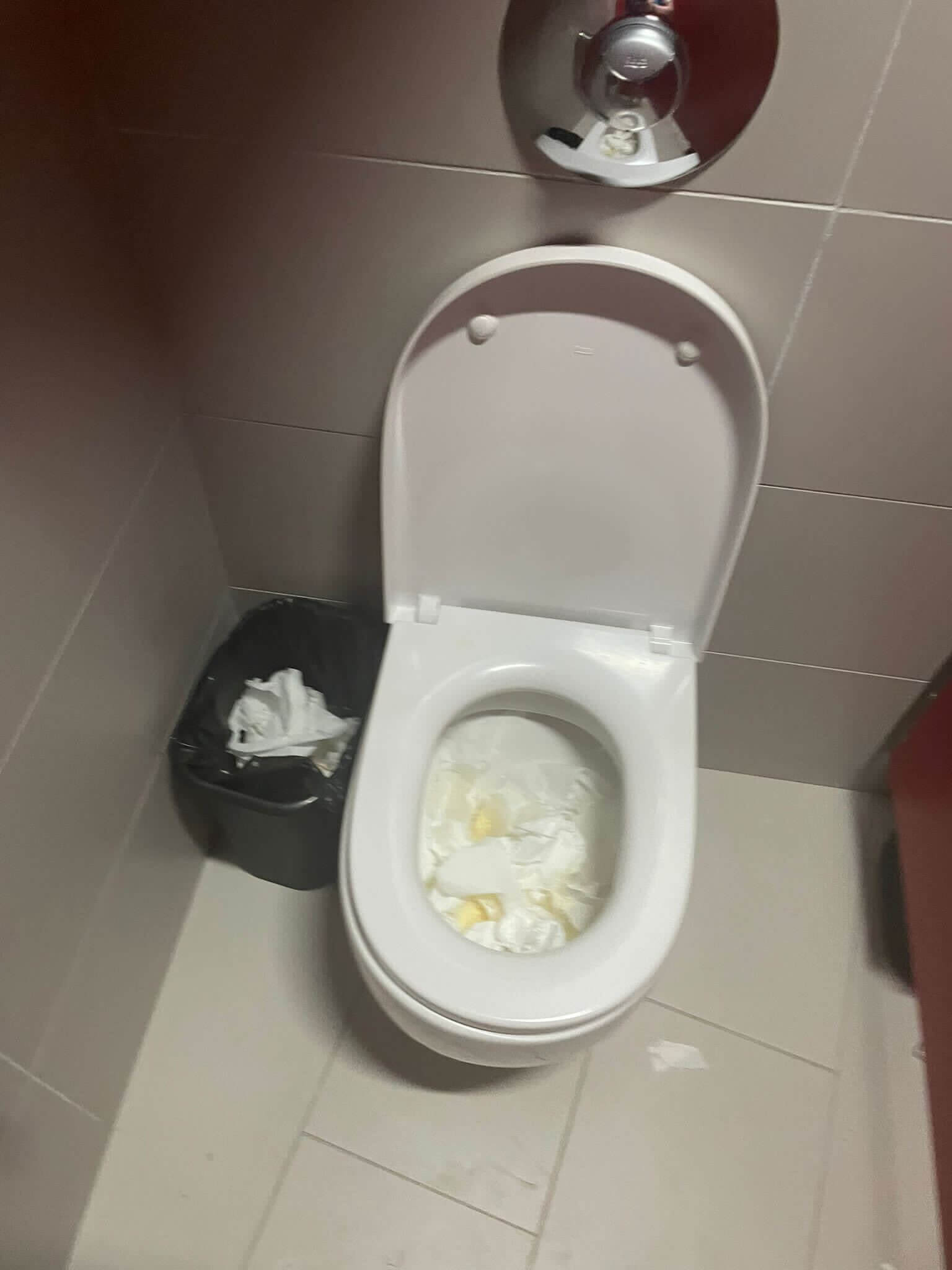 The scene in one of the female bathrooms

“(The final) was one of the worst experiences I’ve had going to football with Rangers,” she said.

“There was a real lack of fan care and I’ve been unwell since I got home from drinking the tap water.

“At the end of the game, there was no running water at all in the upper section. The ladies toilets were overflowing and there was no water to wash your hands with. It’s disgusting but I took some photos for evidence of the shambles.

“It’s the complete opposite experience than you get in Germany when we played Dortmund and Leipzig.

“I absolutely despise going to football in Spain. If this wasn’t the final and we were simply playing Sevilla, I wouldn’t have gone at all. I’ve had too many bad experiences now.

“I’m assuming this was awarded to Sevilla because of the number of times they have won the competition. But I genuinely do not believe any stadium checks were considered for fans.

“They endangered all the supporters and sent a half-hearted apology.”

UEFA on Friday apologized to Rangers fans who were left without drinking water in the extreme heat.

A statement from UEFA said: “Even though the quantity of food and beverages planned by concessionaires was much bigger than what is usually served during a domestic sold-out match at the Sanchez-Pizjuan stadium, it was still not enough to meet the extraordinary demand. of the day and UEFA wishes to sincerely apologize to fans for the inconvenience created. ”

A statement from Spanish club Sevilla meanwhile said demand for bottled water was triple what was expected for a normal match and they sold out.

Their statement said: “The club tried to replenish the water at the bars, but the fans literally assaulted the employees who were in charge of replenishing the bottles as they tried to reach the bars, then finally it was necessary to close them.

“Fans were able to drink drinking water from the taps in the toilets.

“The taps stopped working when all the taps in the stadium were opened at the same time, so the water pump could not serve all of them at the same time. After a few minutes, the service was restored until the end of the match. ”

The Athletic have contacted the Civil Guardia, who did not respond to a request for comment.