An institutional act of homage, they call it. Sergio Ramos got one last year. Marcelo had one earlier this summer. So did Raul back in the day.

The latest to be granted this honor by Real Madrid is Casemiro, who was feted on Monday morning before departing for Manchester United — another great club, but one where, these days, famous players tend to arrive in a blaze of glory, only to leave under a dark cloud.

Ramos was Real’s formidable club captain, an icon of their modern era, but he was 35, a fading force, by the time his contract expired and he left for Paris Saint-Germain. Similar can be said of Marcelo, 34, who is yet to join a new club.

Casemiro is only 30 — still worthy, at least in United’s eyes, of a minimum €60million (£50.9m, $60m) transfer fee and a minimum four-year contract on almost double his previous salary — and it was never Real’s intention to sell him until he informed them last week he had been made an offer he couldn’t refuse.

But he, too, leaves with the Spanish club’s blessing. Not at Real’s behest, but ultimately on terms they are happy to accept.

At another club, it would have caused a meltdown. An icon of the team, a five-time Champions League winner, stating his desire to pursue a new challenge. When you regard yourself as the biggest club in world football, how do you deal with that?

In the case of United and Cristiano Ronaldo, you panic. Because you have spent the past 12 months in thrall to the player and, despite his body language and his demeanor for large chunks of last season, you didn’t see it coming. You are left in a daze for the next two months, not least because the player is still waiting for a credible escape route to emerge. He’s 37 years old. He just wants out. 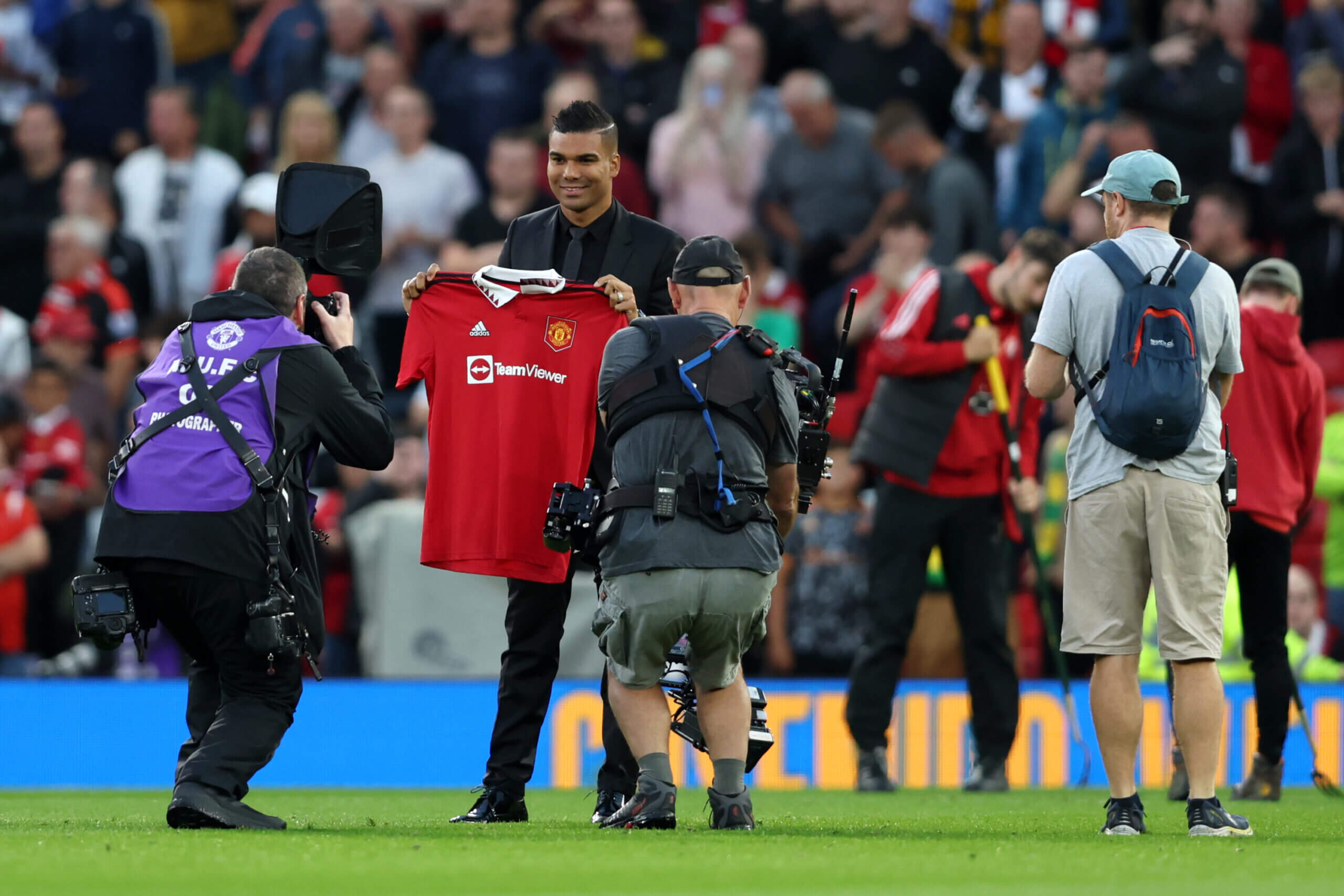 Casemiro on the pitch before United’s game against Liverpool (Photo: Clive Brunskill/Getty Images)

Or, in the case of Real and Casemiro, you take a deep breath, you smile and you decide to grant him his wish because he’s the wrong side of 30 (just, having passed that milestone six months ago), because his performance level isn’t ‘t quite what it was and, most significantly of all, because his successor is already at the club.

Real’s supporters would be forgiven for experiencing flashbacks to the summer of 2003, when another Champions League-winning defensive midfielder was unexpectedly transferred to the Premier League.

The sale of Claude Makelele to Chelsea was one of the great mistakes of Florentino Perez’s first tenure as Real president. It summed up the flaws of the galactico policy that saw David Beckham added to a squad which already contained Luis Figo, Zinedine Zidane and the great Brazilian forward Ronaldo… but weeks later was devoid of the industrious, intelligent midfielder who had allowed the artists further forward to work their magic.

As Makelele said years later, “He (Perez) was not interested in me because I wasn’t going to help sell any club shirts.”

It appears different nearly two decades later, though. There is a profound appreciation of Casemiro’s contribution to the club’s recent successes, as an integral part of the midfield partnership — along with Toni Kroos and Luka Modric — that has dominated the Champions League.

At this most glamorous of clubs, under a president who still lusts after galactico signings (and barely conceals his disgust when a player such as Kylian Mbappe resists Real’s overtures to stay at nouveau-riche PSG), there has been a shift. Commercial strategies tend to be built around superstars, but there is now a recognition that teams have to be built around players who excel at the less glamorous stuff.

Why else would Real have committed up to €100 million to sign Aurelien Tchouameni from Monaco this summer? He is a more expansive player than Casemiro — something coach Carlo Ancelotti was keen to emphasize after the 22-year-old’s excellent performance in the 4-1 win away to Celta Vigo on Saturday — but he is regarded as a significant building block in the next stage of Real’s evolution.

Ancelotti has hinted his preference had been to integrate Tchouameni alongside Casemiro this season and perhaps beyond. That plan has been changed by the Brazilian’s departure to United.

It’s far from ideal, but United’s offer must have felt impossible to resist, particularly because, unlike two decades ago, Real have already been building smartly for the future.

That adds up to more than €230million at a time when those players’ valuations were diminishing (in Varane’s case because he was in the final year of his contract) and when their output on the pitch was, at the very least, beginning to fade . It also coincided with the COVID-19 pandemic and the financial challenges of trying to rebuild the Estadio Santiago Bernabeu.

Over the same period, Real have signed an 18-year-old Vinicius Junior from Flamengo, an 18-year-old Rodrygo from Santos, a 21-year-old Eder Militao from Porto, an 18-year-old Eduardo Camavinga from Rennes and now Tchouameni. The total expenditure on these deals is estimated at around €250 million, a significant outlay but one made with the next decade and more in mind. 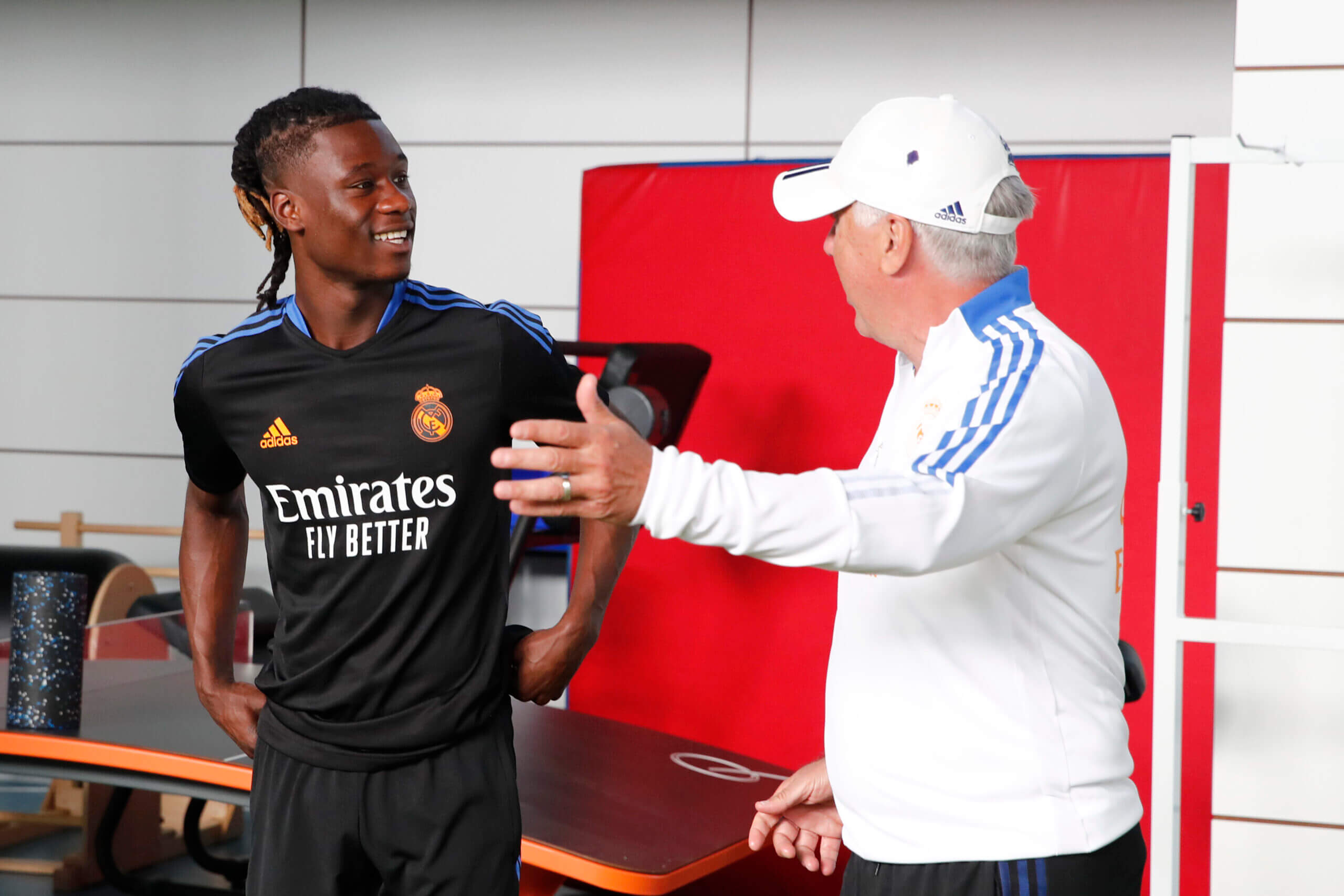 There have been some far more questionable decisions over the same period — those huge deals to sign Eden Hazard and Luka Jovic in the summer of 2019, the sale of Achraf Hakimi to Inter Milan a year later — and it is fair to say the rebuilding operation of the past four years has not been as slick as last season’s glorious outcomes suggested.

Several times, Real’s victorious Champions League campaign could very easily have ended in defeat and indignation, as did the previous three.

But for all the emphasis on the brilliance of Karim Benzema throughout the knockout stage and the excellence of Thibaut Courtois and indeed Casemiro in the final against Liverpool, the contributions of the younger players should not be overlooked.

That is not to say that it is time to bring down the curtain on the old stagers. It certainly hasn’t been Ancelotti’s intention and, besides, did you see Modric’s performance against Celta at the weekend? But teams have to evolve (something Real appeared to lose sight of during Perez’s first presidency). Hence Vinicius, Rodrygo, Militao, Camavinga and Tchouameni, not to mention their interest in Borussia Dortmund’s 19-year-old Jude Bellingham if, as is expected, he is available next summer.

As unnatural as it might feel to praise the biggest club in the world, under the presidency of the man behind the dreadful European Super League project, Real are operating far more intelligently than they have done in the past.

Not only have they signed so many of the best young talents in world football in recent years thanks largely to their head of international recruitment Juni Calafat, but they have done so with clear succession plans in place.

In the case of Tchouameni, the plan was to integrate him gradually over the course of this season — as they did with Camavinga in the previous one, when the teenager made 40 appearances in all competitions but was used mostly from the bench in the bigger games . Ancelotti said after the UEFA Super Cup victory over Eintracht Frankfurt two weeks ago that Tchouameni would “improve and learn a lot alongside Casemiro”.

That plan has been changed by United’s desperation to sign Casemiro at almost any cost — offering the type of wages and contract that led Real and the player to embrace a transfer that had not been on the agenda of either. It had been no more Real’s intention to sell than it was Casemiro’s intention to play in the Europa League this season.

On Saturday evening, Ancelotti said that the transition in Real’s midfield “can be smooth or a little forced”. He was talking about the technical aspects of play when possession is gained or lost, but he could just easily have been referencing the turnover in personnel. It might be smooth — or at least as smooth as is possible when moving on from such accomplished players — but perhaps the speed of it has been forced, in this instance by Casemiro’s departure to Old Trafford.

It isn’t ideal. There might be moments, possibly in the Champions League knockout stage next spring, when Casemiro’s experience, know-how and steeliness are missed. There might even be calls to sign a more experienced player to reinforce the midfield in the short term and help with that transition. As much as he defies such predictions, Modric — 37 in a couple of weeks — surely cannot operate at this level much longer.

But it makes sense to accelerate the rebuilding program from a position of strength.

Sooner or later, the time will come for Real to say goodbye to Kroos, who turns 33 in early January, and Modric.

They, too, will deserve one of those institutional acts of homage because, when that time comes, it will be with the club’s blessing, with a succession plan in place.