Graham Potter’s first game in charge of Chelsea will have felt curiously familiar to anyone who regularly watched his Brighton side.

On paper, Potter’s side could either have been a back four — with Cesar Azpilicueta partnering Thiago Silva in the center of defense, and Reece James and Marc Cucurella on either side — or a back three featuring Azpilicueta, Silva and Cucurella. It turned out to be the latter, with James pushing forward to become a wing-back. That left Raheem Sterling, in theory, as the wing-back on the opposite flank.

But in reality, Sterling was nothing like a wing-back. Take this situation, for example, after a throw on the far side. Cucurella is in a position that suggests he’s responsible for covering the entire left side of the defense… 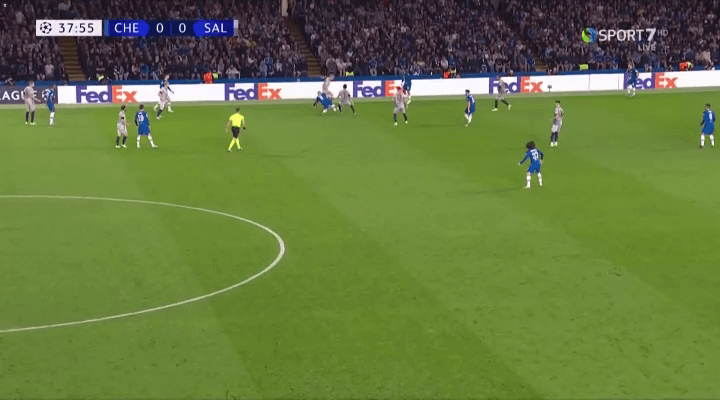 …and it’s only once Red Bull Salzburg definitely wins possession from the throw that Sterling comes ambling inside from a very wide position. This, clearly, is not a proper “wing-back” — but, in the absence of a proper term, let’s stick with that for now. 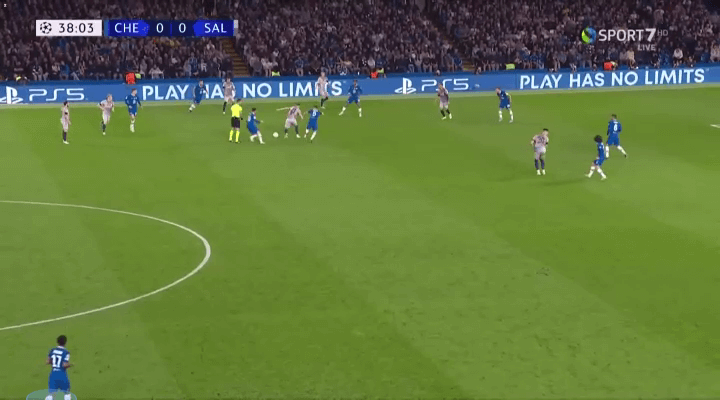 Indeed, at times it felt like Sterling was more part of a front three, alongside Kai Havertz and Pierre-Emerick Aubameyang. Midway through the first half, he’d raced in behind to collect a Havertz lofted pass over the top of the Salzburg defense… 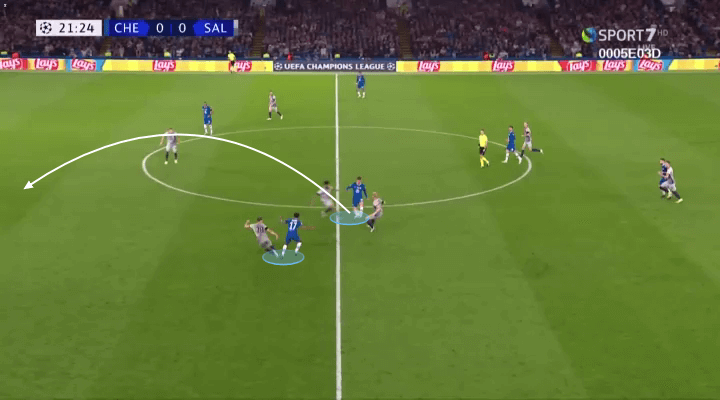 …and, in this position, feels like more of an inside-left. 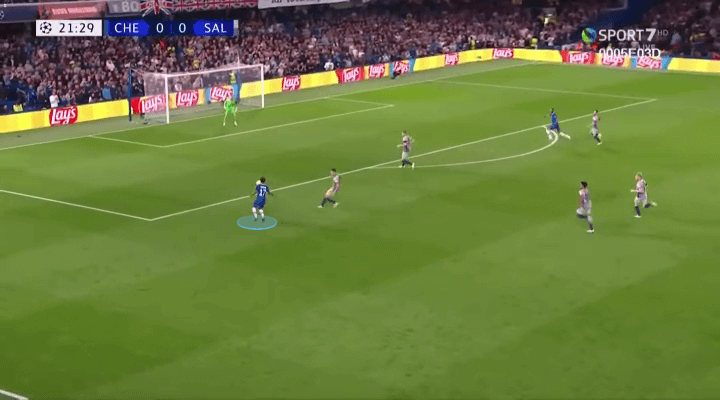 Sterling’s only real defensive contribution was when he rushed back to help dispossess Salzburg by the touchline, but the more notable feature of this move was how Cucurella had moved out from a left-sided centre-back position, and how Jorginho had dropped in to effectively maintain the three-man defense. 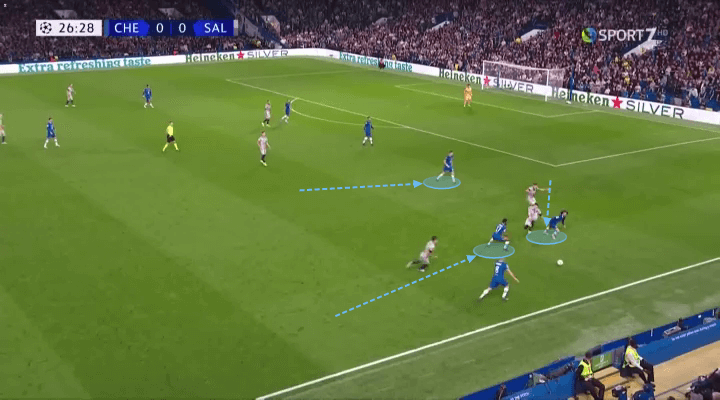 And the main feature of Sterling’s game was not really hugging the touchline and dribbling forward directly but instead waiting at the far post to collect crosses. Ten minutes in, James’ deep cross to the far post… 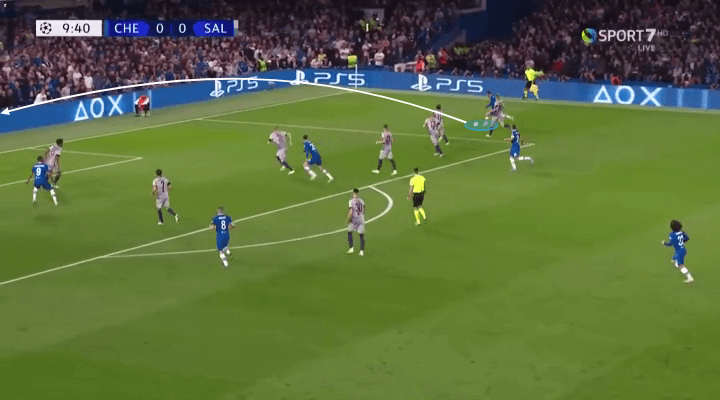 …was miscontrolled slightly by Sterling, but he did well to recover… 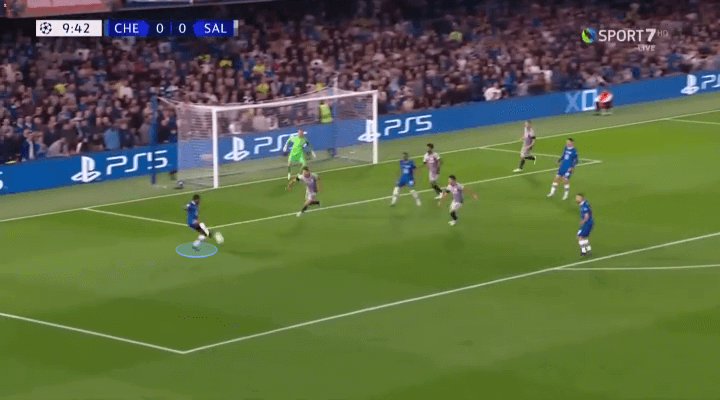 …and slip in Cucurella on the overlap. 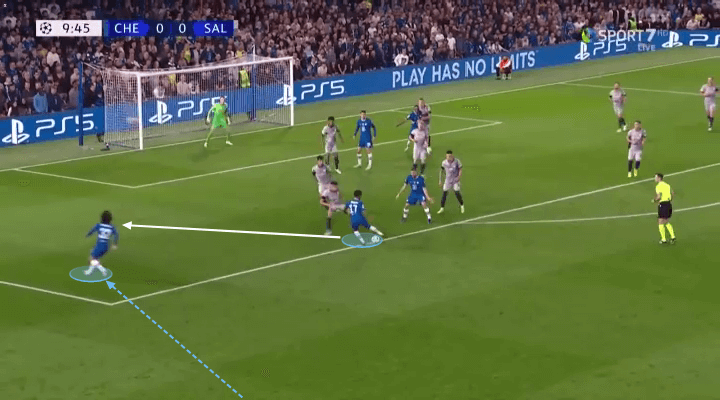 Eight minutes later, it’s the same thing — this time James gets to the byline… 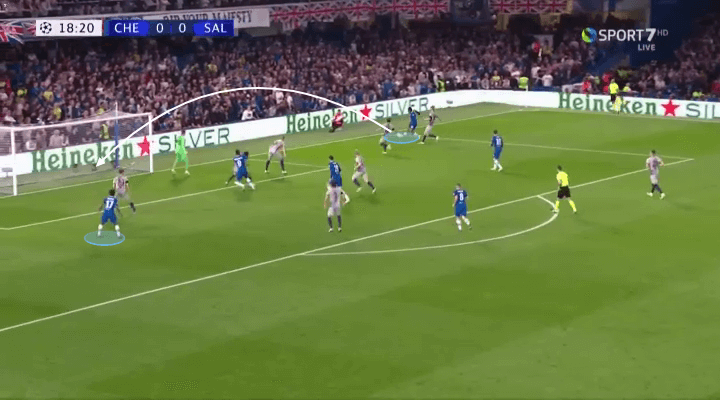 …and plays a deep cross over to Sterling at the far post to bring the ball down, and try to make space for a shot. 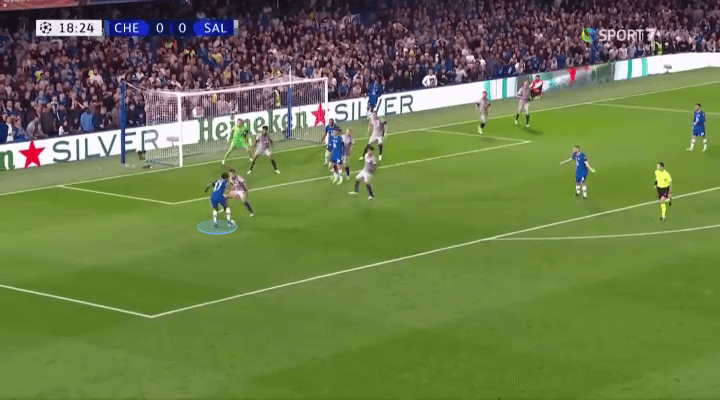 The next situation came after a wonderful turn from James — and, spotting Sterling all alone at the far post, he tried to fire in a powerful low cross… 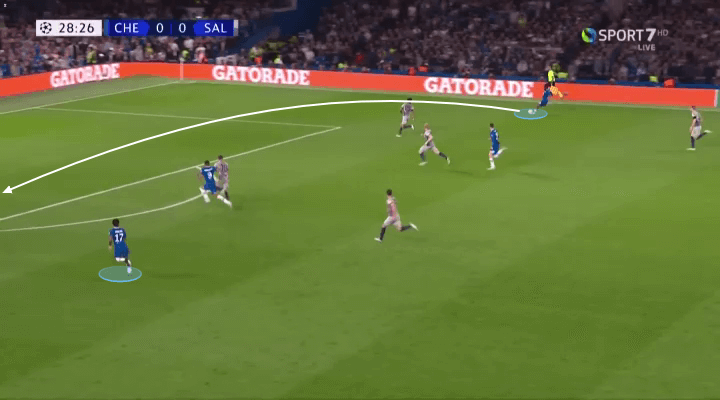 …but it was played beyond Sterling and Aubameyang. 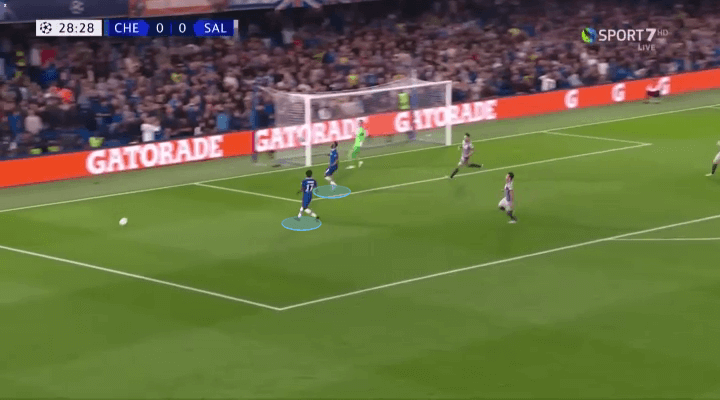 And then there was some variation — James knocking the ball back to Azpilicueta, whose deep cross… 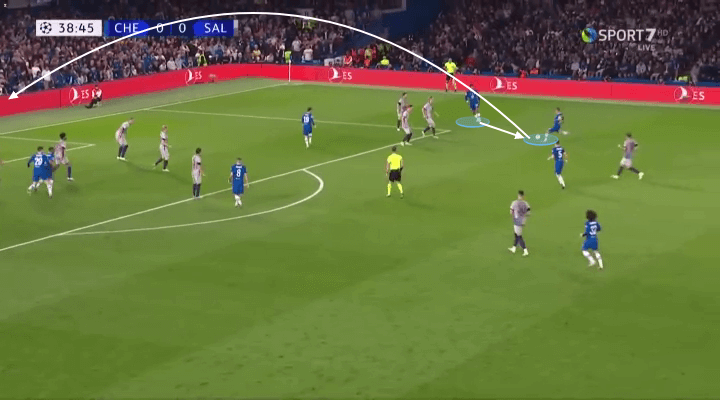 …invited Sterling to volley towards the goal, with his shot blocked. 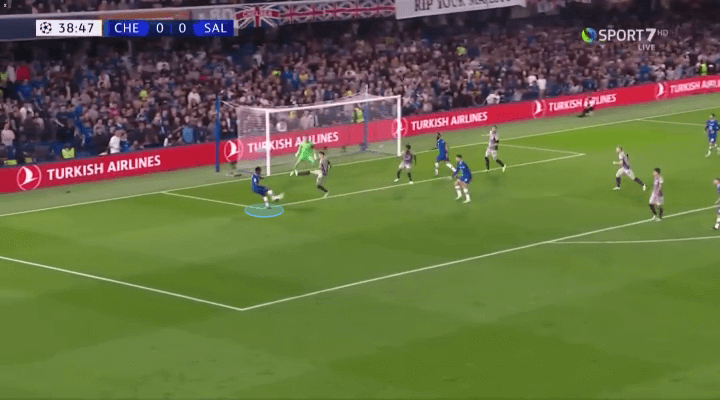 But, in Chelsea’s first move of the second half, the plan finally paid off. This time Mason Mount made a run in advance of James, and received the ball on the run. 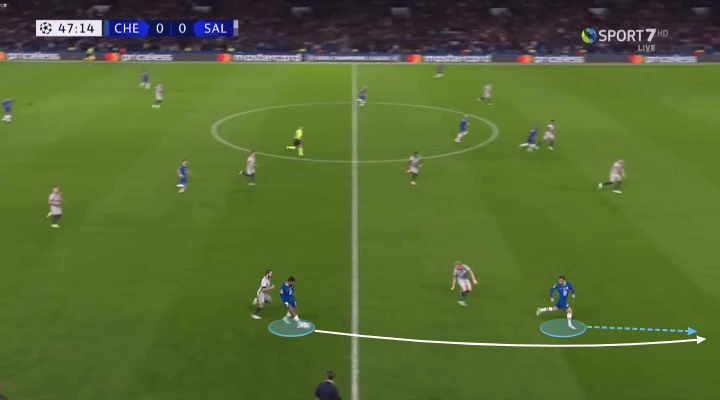 It’s tough to know whether this slightly miscued cross, which somehow evaded four players in the middle, was actually intended to reach Sterling. But, from the aforementioned deep crosses in the first half, it feels like there’s a good chance this was the idea… 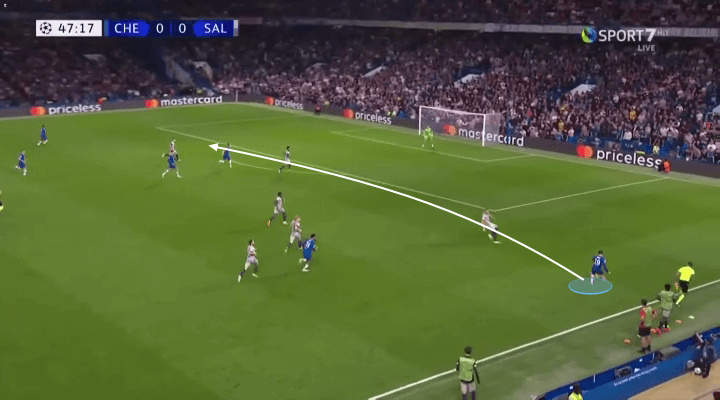 …Sterling took a touch to set himself, and then curled the ball perfectly into the far corner. 1-0. 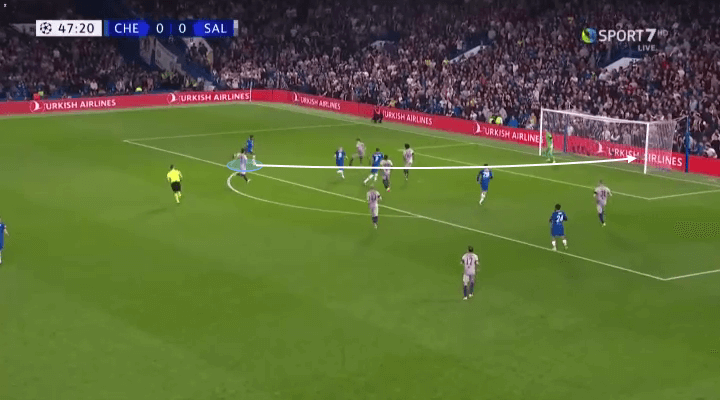 And, by this point, Chelsea hadn’t encountered too many defensive problems.

Suddenly, though, perhaps when their pressing dropped a little, Salzburg came into the game. And Chelsea’s defensive shape started to look slightly crazy — this is essentially how they were playing, with something approaching a five-man midfield but the notional wing-backs actually in front of the midfield. 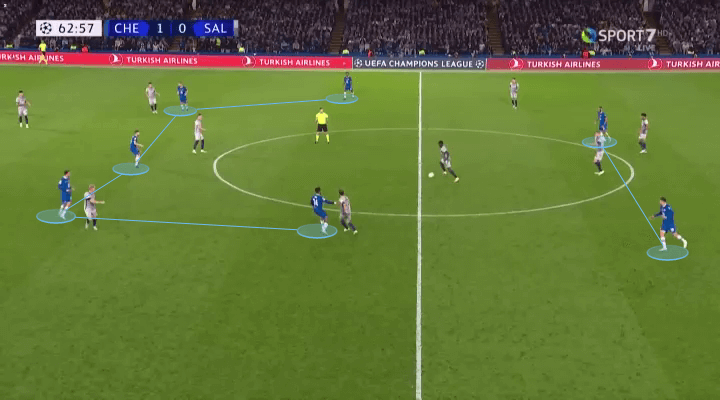 Maybe this is a completely wrong interpretation of the system, and it’s actually a 3-3-2-2. Either way, however, in this situation Chelsea are allowing Lucas Gourna-Douath time on the ball in midfield, and lacking width in their defensive shape.

And, sure enough, Gourna-Douath has time to thread the ball through to Maurits Kjaergaard. Here, it feels like it’s actually Mount and Mateo Kovacic who have the responsibility to defend the wide areas, but Mount isn’t in a position to stop this pass. 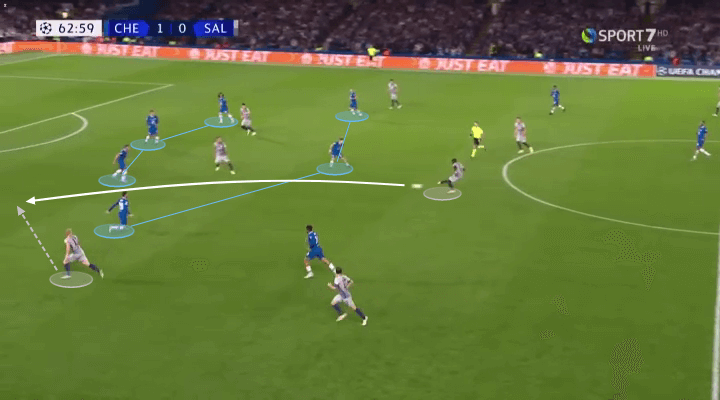 Salzburg have easily found space on the outside of Chelsea’s defense. 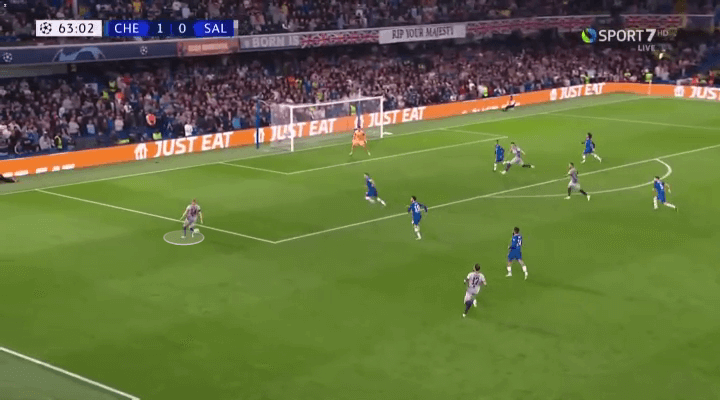 Nine minutes later, Chelsea have possession and it’s worth assessing the positions of the two “wing-backs”— James and Sterling are both high and, in Sterling’s case, astonishingly wide. The other notable player in this image is right-sided center-back Azpilicueta, on the near side. 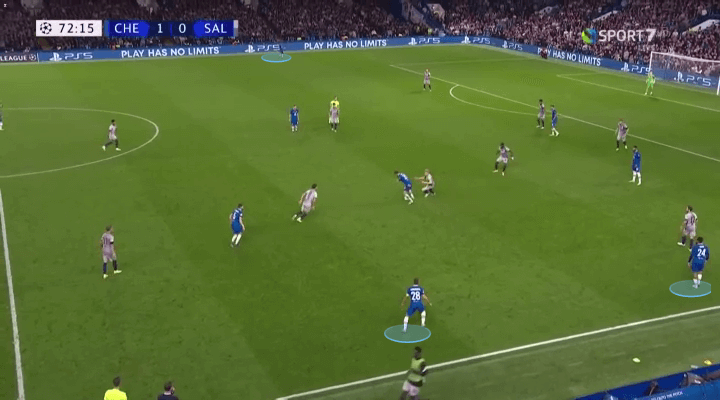 And when Chelsea loses possession, James and Sterling are both unable to drop back and help. Azpilicueta is not able to defend the right of the pitch. Again, Salzburg got men in behind down the near side, and could have worked this situation better. 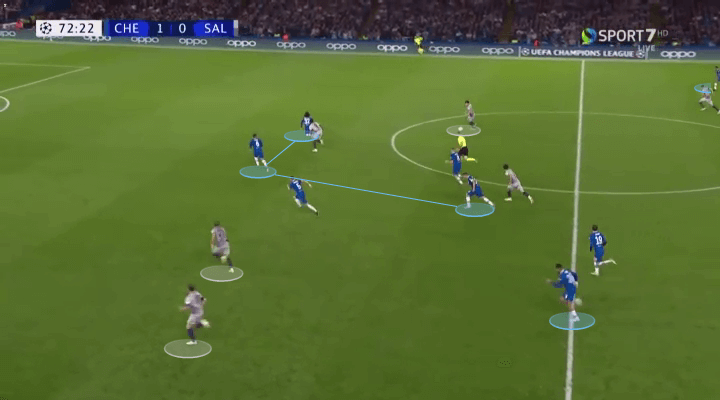 Two minutes later, the goal comes. Again, Sterling and James aren’t in a position to support the defense — they’re on the halfway line — although perhaps they’re simply not supposed to be supporting the defense. Still, this again means that Chelsea are exposed down one side when a wide centre-back — this time Cucurella — gets sucked up the pitch… 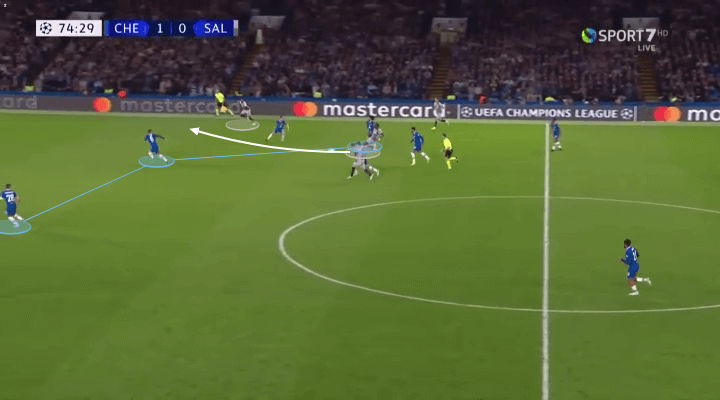 …and after Silva misses a tackle on the far side and Azpilicueta gets caught out by the movement of Noah Okafor, Salzburg snatch an equalizer, which leaves Chelsea bottom of group E. 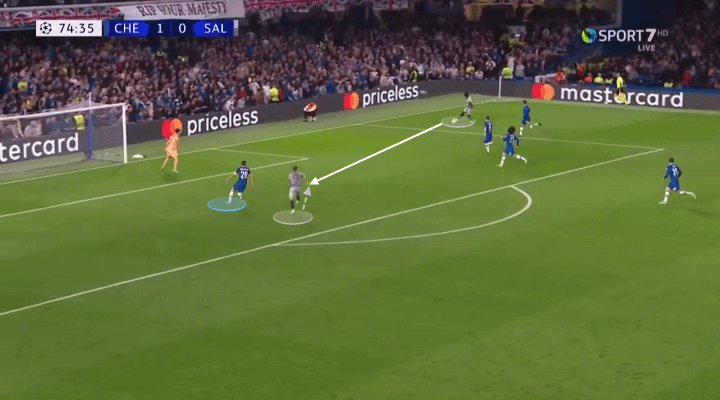 It felt like the goals stemmed directly from Chelsea’s approach — extremely high wing-backs (or wingers) in combination with a three-man defense meant Sterling continually received deep crosses on the outside, but also meant Chelsea simply couldn’t cover the width of the pitch at the back.

But this is clearly what Potter wanted, based on the way his Brighton side played this season, and the way Chelsea were positioned throughout this game. It’s too soon to make judgments on whether Potter’s approach will prove successful at Chelsea, but either way, it’s unlikely to be dull.