After a brief hiatus during Royal Ascot, TDN Europe’s weekly Q&A series is back with Real Madrid and Spanish football star Alvaro Odriozola telling Brian Sheerin all about his endeavors in racing so far, his friendship with Joseph O’Brien and his ambitions to own a “ horse of a lifetime. ”

At just 25 years of age, Odriozola has already enjoyed a hugely successful career as a footballer and revealed how he adopts a similar mindset to racehorse ownership and breeding by saying “you have to dream big in order to get what you want in life”.

Already a winning owner in Ireland, after Gaheris won at Leopardstown last year, Odriozola shares the steps he is taking towards becoming a successful owner-breeder in this unmissable interview.

Brian Sheerin: What is your philosophy to racehorse ownership?

Alvaro Odriozola: My dream is to own a horse of a lifetime. You have to dream big in order to get what you want in life. I have always dreamed big in life and I ended up signing for the biggest football club in the world in Real Madrid so why not? You have to dream it and go for it, so my aim in horse racing is to have a horse of a lifetime. What I am trying to do right now is to focus on the breeding side of things. Normally, the most special racehorses are owner-bred, not bought at the sales, so I am in the process of starting my breeding operation. For me, that is the area I am most passionate about. I just love it. My goal right now is to breed that horse. To create your own horse, from picking the stallion and choosing the right cross, that’s the most beautiful thing. I started focussing on buying mostly fillies last year. The plan is to race them and, hopefully, if they are good enough, they will become broodmares. I am only 25 years old so I have my whole life. I have a lot of patience and my end goal is to have three or four very good mares to breed from and hopefully I will get my horse of a lifetime.

BS: Do you have any broodmares at the moment?

AO: Not at the moment. Up until now, I have only really been buying colts, as it started out as fun. I grew up going racing in San Sebastian Racecourse, which is the town where I come from, and a beautiful place where I would urge everyone to come and visit. I bought my first filly as a foal at Goffs. She’s a 2-year-old now and is in training with Carlos Laffon-Parias in Chantilly in France. I bought a Frankel (GB) yearling filly last year and she’s in training with Joseph O’Brien in Ireland. I also have a Nathaniel (Ire) filly (signed for by Justin Casse) who is in training in Spain. I bought her at Tattersalls. Those are my three fillies at the moment and they all have beautiful pedigrees so hopefully I will have success with them. I spoke with Joseph and Justin last year and he told me that, if I want to breed, I need to breed with a good racing mare with nice pedigrees. As they say, breed the best to the best and hope for the best.

BS: Speaking of which, I saw that you were in Coolmore last week.

AO: They are always really kind to me when I am in Ireland. I always say that Coolmore, for any racing fan, is the Disneyland of horse racing. I got very lucky because I got to visit Coolmore last year just one month before Galileo (Ire) passed away. I feel very fortunate to have met a horse like him. They told me that, one of the last photos they took of Galileo at Coolmore was with me, so that is pretty special as he is one of the greatest horses of all time. For me, I love the Classics, so to see Camelot (GB) and Australia (GB) last week was amazing. I am really excited about what St Mark’s Basilica (Fr) can achieve at stud as well because he has the pedigree and he has the looks. He was also an amazing racehorse. He was in Galileo’s box when I visited so hopefully he can be the next great stallion for them.

“Joseph is my trainer but I have stayed in his house for four or five days this year and I would consider him more as a friend than a trainer,” – Alvaro Odriozola.

BS: What attracted you to have horses in training in Ireland and, more specifically, how did your association with Joseph come about?

AO: I was at the Book 2 Tattersalls Sale in October 2019. At the time, I had spoken once or twice with Joseph’s brother Donnacha, and remember congratulating him for winning the 2000 Guineas on Magna Grecia (Ire) via Instagram. I bought a Camelot colt to send back to Spain and Donnacha texted me to see if I had a trainer for him. Joseph won the Derby on Camelot and obviously won the Irish Derby with his son Latrobe. I told Donnacha that this horse was to go to Spain but we bought another Camelot the day after to send to Joseph. That turned out to be Gaheris (Ger), who was our first horse in training in Ireland, and he was also our first winner, as he won a Leopardstown maiden last year.

BS: How did having your colors carried to victory with Gaheris compare with all of your achievements in football?

AO: It’s very similar to winning a match or scoring a goal but I guess it’s pretty different. When I am on the pitch, I do not get nervous because I am confident about myself and know that I can do it. Obviously, to be successful in racing, it depends on you to buy the horses but, at the end of the day, it really depends on them, which is quite beautiful. The satisfaction of winning a race, you can not compare it with anything. It’s a really beautiful moment.

BS: Joseph is of a similar age [29] to you which makes all of his success even more remarkable.

AO: Joseph is my trainer but I have stayed in his house for four or five days this year and I would consider him more as a friend than a trainer. He has a great pedigree, and it was obvious that he was going to make a really great trainer but, if I am honest, I think he will be number one some day. The way he thinks about his horses, 24 hours a day, is amazing. He knows every single detail about each horse in his yard and he has an amazing team around him. I think he will be the champion trainer one day and I hope we have a really good horse together.

AO: When I said Joseph thinks about racing every minute of the day, the top football managers are the same; they live for the game. The top trainers remind me very much of the football managers in that they are responsible for everything.

BS: You mentioned that you have horses in Spain and France as well as Ireland. What is the total breakdown of your string?

AO: I have five in Spain, three in Ireland and just one in France. For me, the dream is to win the Derby. I was at Epsom in 2019 when Anthony Van Dyck (Ire) won the race and I fell in love with the place. It’s a special race. I love Irish Champions Weekend and really enjoyed St Mark’s Basilica winning the Irish Champion S. last year as well. My main goal is to have horses good enough to run in those races. I think it’s easier to get black type in France, which is why I would like to keep my fillies there, and I continue to have horses in Spain.

BS: You are clearly very passionate about racing. When you talked about starting your breeding operation, you obviously have plans to stay in racing for a long time? 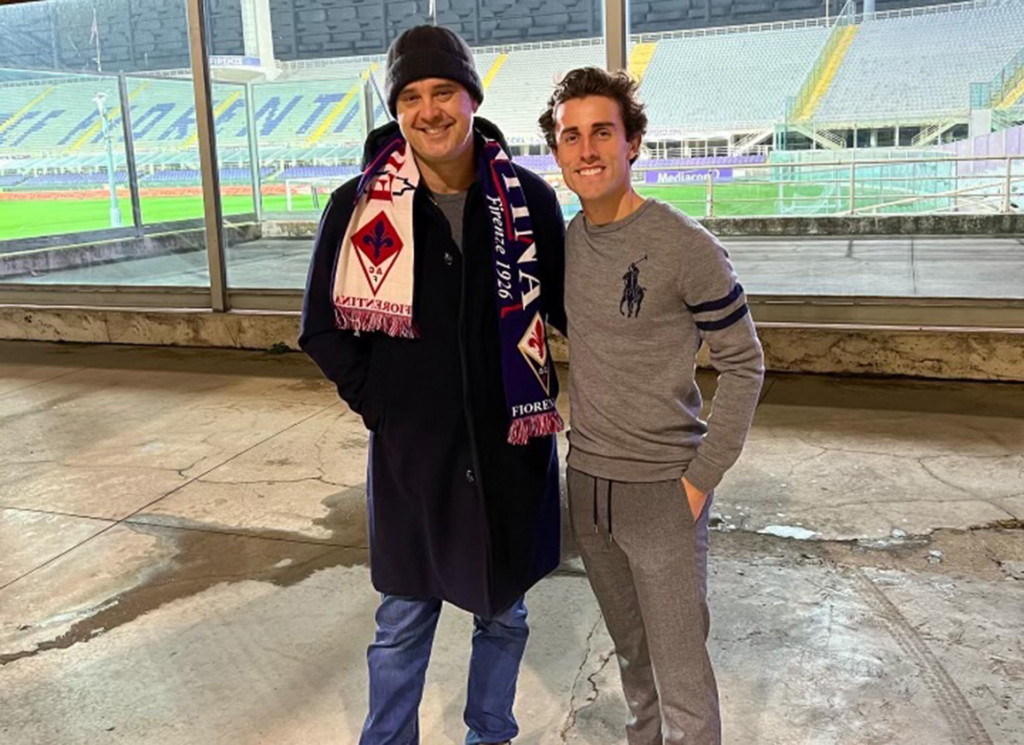 AO: Exactly. My dream is to breed horses when I retire from football. That’s how I see my future and I would love to own my own stud one day. I do not know where that will be but that is my dream. I spent last season on loan at Fiorentina in Italy and learned all about Federico Tesio, who bred Nearco (Ity), the stallion responsible for Northern Dancer (Can) and Sadler’s Wells. I love racing but breeding is my passion and, to be able to go back through generation after generation, that’s what I love to do most. I must also say that I would really like to offer my condolences to the family of Alec Head. His passion for racing was amazing and he was a true legend of racing. For me, he was an inspirational man and I was sad to see he passed away on Wednesday.

BS: You must be on the road a lot as a footballer so how do you squeeze in the time to go racing and visit your horses?

AO: I am really fortunate to be a footballer. I do not have lots of time on my hands to go and see my horses so, when I take vacation in the month of June, I will go to Ireland, Epsom or to Royal Ascot. I can not go racing or see my horses during the football season but there are other ways of enjoying it. For example, Joseph has a very good app called The Racing Manager and he keeps me updated so it works really well.

BS: Former NBA star Tony Parker had his colors carried to Classic glory when Mangoustine (Fr) won the French 1,000 Guineas and more recently Antoine Griezmann won the German 1,000 Guineas with Txope (Fr). It has generated a lot of exposure for racing, which is excellent.

AO: The interest in racing is on the up. There are a lot of famous footballers who are interested in racing. It’s a healthy hobby and you can enjoy racing by watching and you do not actually have to own a horse to get the benefits. Sports people love the adrenaline involved with winning a match or scoring a goal and, when a horse wins a race, it’s pretty similar. Horses are also elite athletes and have to be at peak fitness to win a race. They also suffer injuries like we do and we can relate to them. I try to bring my Real Madrid teammates to the racecourse and they enjoy it a lot. Philippe Couthino is also a very good friend of mine and he is buying horses now as well. Racing is getting more popular in football and it’s good to see that because it’s a beautiful sport.

BS: Finally, you wear the all-white strip of Real Madrid, one of the most famous clubs in world football, but your horses carry red and white silks. What is the significance of your racing colors?

AO: I started playing football in school in Spain and our director loved Ajax Football Club so we wore red and white shirts in our matches. So, when I was 12 years of age, we played in white jerseys that had a red stripe in the middle. Those were the colors of my first football team and now they are the colors my horses carry so it’s very special. It reminds me of the time I spent playing football with my friends as a kid. Hopefully these colors will bring good fortune for us in the future.