Last week, The Athletic attempted to fix how we pick a Young Player of the Year each season and suggested it becomes a Rookie of the Year award instead.

We created a new methodology to find young and promising talent within the Premier League, whittled down a 12-man shortlist of nominees and then asked for your help in deciding a winner. 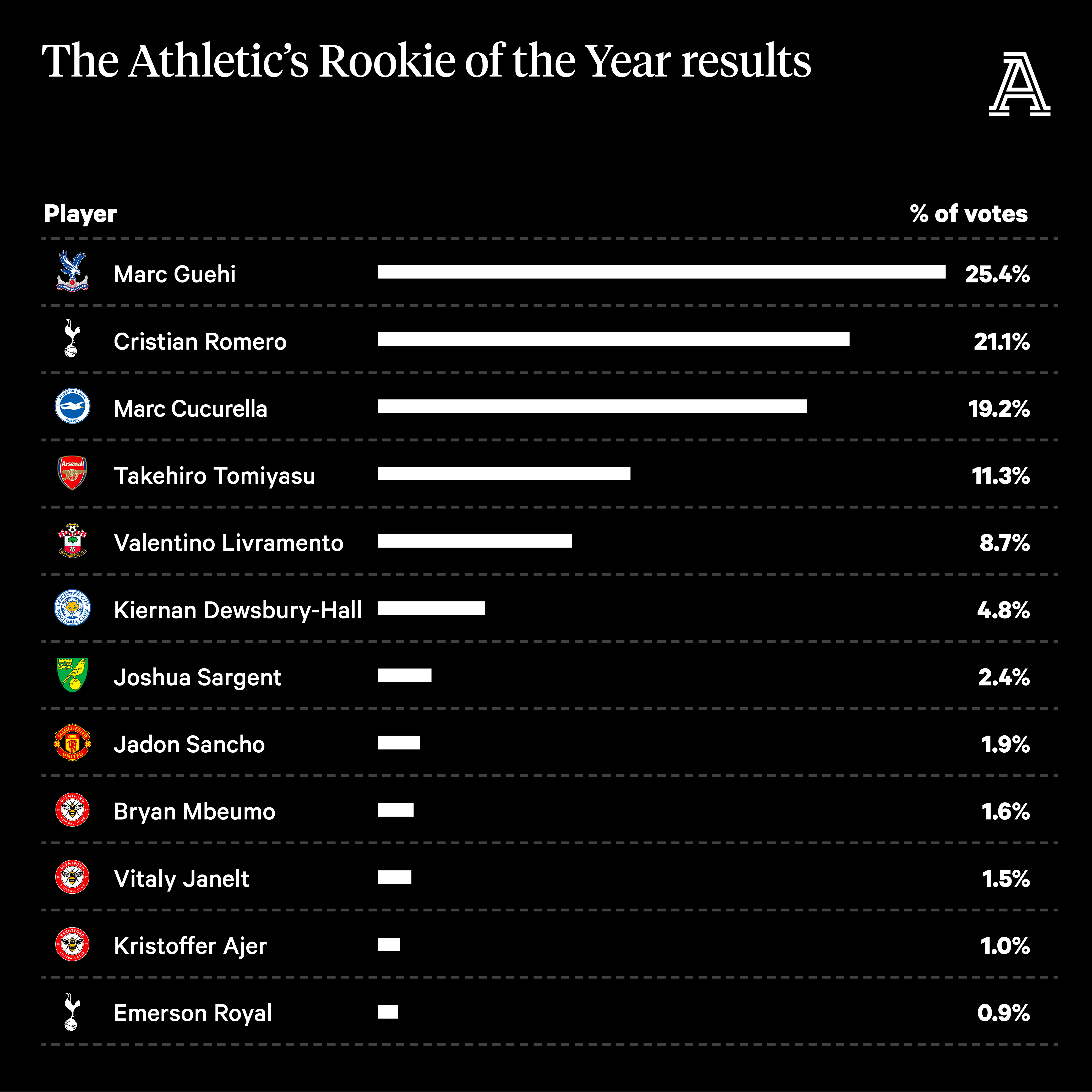 Listen to Marc Guehi speak, watch him play, spend time in his presence, and his calm, considered and measured demeanour is immediately striking.

It is no surprise that he was schooled through Chelsea’s Cobham academy. Producing talented footballers is one thing – to instil confidence and assuredness, particularly when speaking in public, is another.

He considers himself “miles off” being the best defender in the Premier League, but after his debut season in the division following that summer move from Chelsea, he already stands out among his peers.

“It’s the right answer,” his Crystal Palace manager Patrick Vieira said with a laugh when told of those words before the FA Cup semi-final against Chelsea last month. “It really tells you what kind of person he is – and he means it.”

There were 42 appearances in all club competitions, including 36 league starts, and a first senior England cap.

There will undoubtedly be many more to come for a player who was born in Ivory Coast before his family moved to the UK when he was a baby.

Alongside central defensive partner Joachim Andersen, he recorded five successive home clean sheets in the final two months of the season, while his ability to carry the ball out from behind and his leadership skills are vital characteristics that made him a mainstay of this side in such a short space of time – and saw Guehi take 25.4 per cent of your votes.

Stepping up from playing the previous season and a half on loan in the Championship with Swansea City has seemed so simple for him.

Already having deputised as captain on occasions, should he remain at Palace for the foreseeable future it is easy to see that becoming a more permanent arrangement.

If you’ve not seen much of Guehi and would like to know more about the 21-year-old’s game, the following chart from smarterscout – a site that employs advanced analytics to break down elements of a footballer’s game into different performance, skill and style metrics – can hopefully provide guidance.

Guehi has shown in his first Premier League season that he has the makings of an exceptional center-back. His above-average rating for ball recoveries and interceptions (63 out of 99) suggests someone skilled in the “cat-like” defensive arts of managing space and preventing difficult situations arising through good positioning.

The contrast between his defending impact (53/99) and defending intensity (14/99) also suggests a player who does not tackle often but wins his one-v-one duels when called upon. 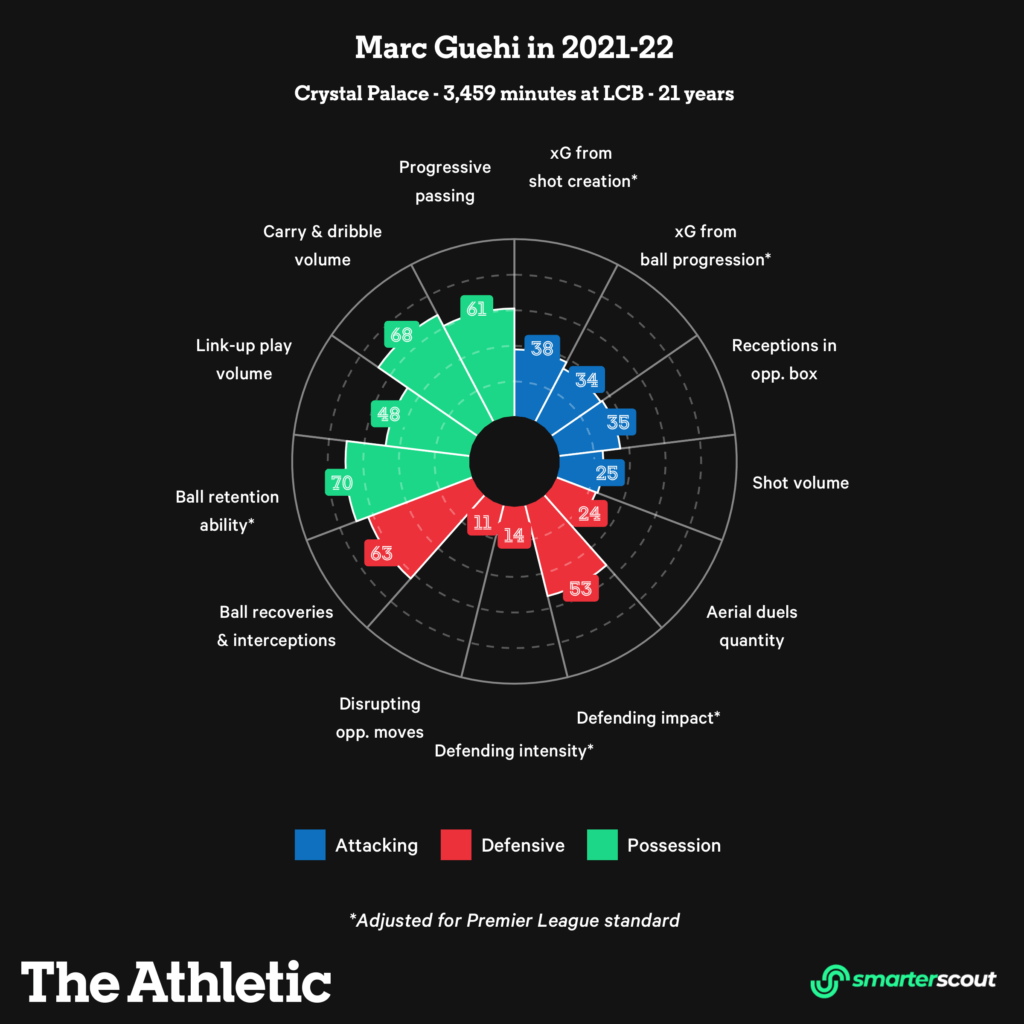 Guehi’s ability on the ball is of particular interest.

As Matt Woosnam wrote in The Athletic six months ago, these progressive runs give Palace an additional tool in working the ball from the edge of their penalty area to the oppositions’ one.

His carry and dribble volume rating (68/99), coupled with his ball retention ability (70/99), suggest Guehi is a sensible ball-carrying defender. His progressive passing rate of 61 out of 99 (defined as how many passes the player attempts that move his team 10m-plus upfield per attacking touch) indicates someone who can create good chances but does not force a final ball if it is not on.

Save for his aerial ability on set pieces (open-play headers rating: 86 out of 99), Guehi has shown himself to be above average at almost every major task that gets asked of a modern-day center-back. 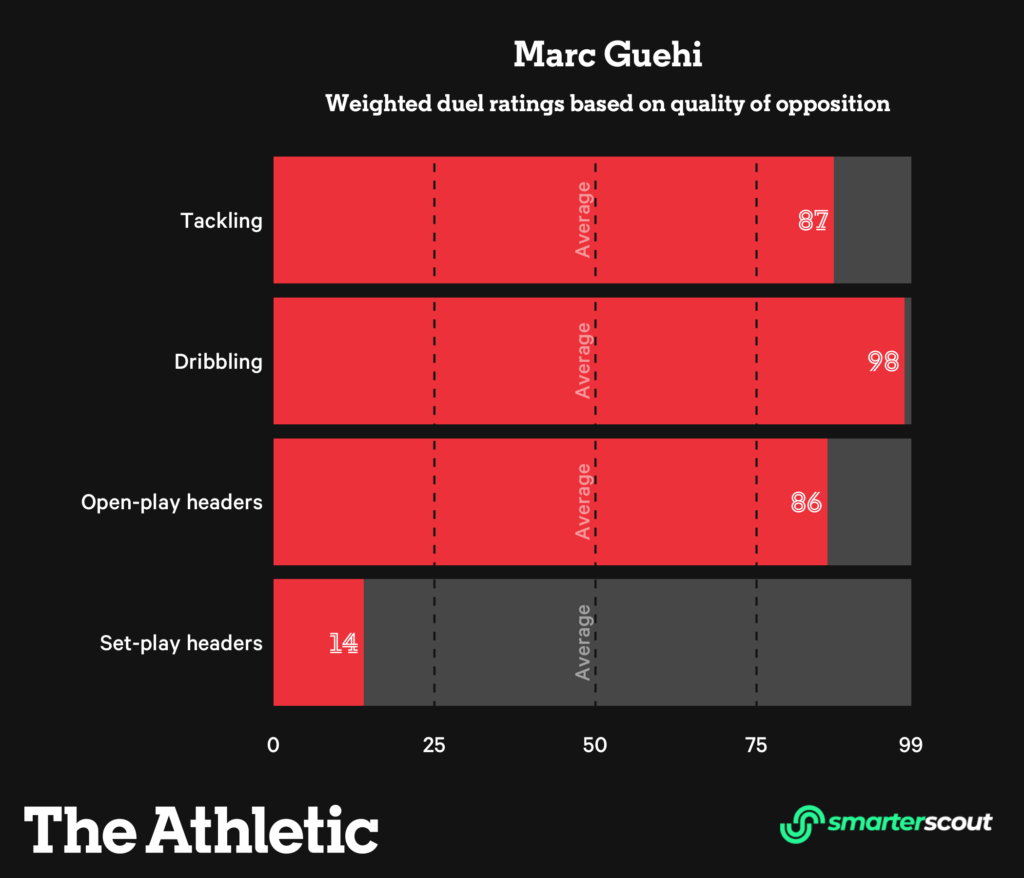 If he continues his development under Vieira and avoids injury, it surely won’t be too long before he is dubbed “a Rolls-Royce defender”.

Marc Guéhi took it for a spin 🌪#CPFC | https://t.co/utMcYSDkhb pic.twitter.com/38Pg30lPwN

Having made his senior England debut against Switzerland in March, to add to over 50 age-group caps won from under-16s to under-21s that included starting and scoring in the Under-17 World Cup final triumph in 2017, Guehi has been included in Gareth Southgate’s latest England squad.

However, he may not play in any of the four Nations League games against Hungary (twice), Germany and Italy next month because of the ankle injury suffered against Everton a week ago that kept him out of Sunday’s season-final win over Manchester United.

Given his promise, though, it should be a case of when rather than if he becomes a consistent member of the England setup.

The future is bright.

Four members of our 12-strong shortlist have yet to receive a senior cap for a national team (one can still switch allegiances if he wishes), while seven play for a Premier League club outside of the traditional Big Six. Four also qualify as homegrown players. Seven are defenders, two are midfielders and three are attackers.

Coming third, with 19.2 per cent of reader votes was Marc Cucurella, Brighton’s highly talented and versatile Spanish defender, who earlier this month won his club’s Player of the Season and Players’ Player awards. 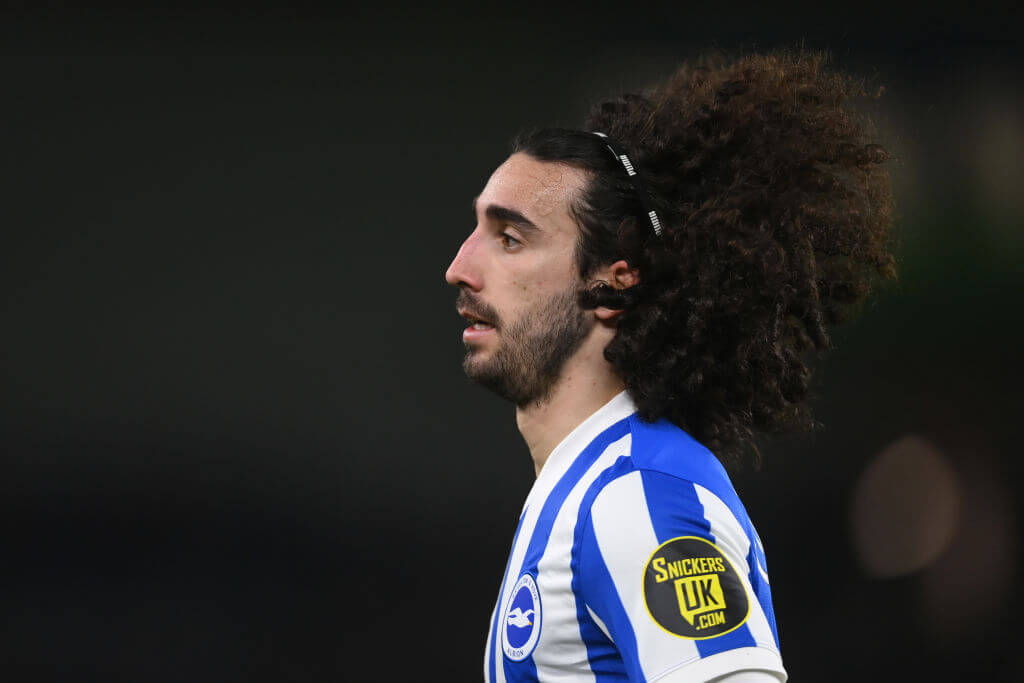 In second, with 21.1 per cent is Cristian Romero, a center-back who will likely become a stalwart of Antonio Conte’s regeneration of Tottenham.

The top three split almost two-thirds of all votes between them, with the rest of the shortlist a significant way behind.

Finally, a word on our methodology

“Devising a criteria for Young Football Player of the Year is a difficult task. You’re trying to apply an objective framework for ranking individuals in a team sport that allows for a lot of subjective interpretation. “

Thank you to all readers who commented on the method we used to create our shortlist. We’ve taken on board the feedback regarding our framework and would like to like to make changes to any future Rookie of the Year pieces.

To paraphrase a line attributed to Steve Jobs, our product was not perfect, but we are going to iterate fast.

A number of you called for us to drop our minutes-played criteria to something closer to 1,000, to allow players such as Dejan Kulusevski (1,265 minutes), who joined Spurs in the January window, to be included.

We will keep our current cap of 1,500 minutes but will be mindful of 2021-22 debutants who finished under that number so they can be contenders for the shortlist next season.

As such, Kulusevski will – if Tottenham keep him after this impressive loan spell – be eligible for Rookie of the Year 2022-23 (with some sort of symbol / check / balance as a reminder of the half-season in the Premier League already under his belt).

We’d also like to give a special thank you to subscriber Prithvideep S, who asked us to adapt our criteria to reflect players who might be in their second or third season in the Premier League but had only played a handful of minutes in any previous ones. Under this suggestion, the likes of Harvey Elliott and Jacob Ramsey could be considered in future.

A number of you believed our shortlist of 12 was too long. We will try to aim for eight candidates next time, similar to the official Premier League Young Player of the Year award that was won by Phil Foden this season. And last.

As for those readers who disliked the word “Rookie”, we will consult our thesaurus for alternatives. Please let us know if you feel “Newcomer”, “Debutant” (or another term) would be more fitting.

The Athletic’s end of season awards will be broadcast live on Twitter at 6pm BST, 1pm EDT, 10am PDT on May 26 – https://twitter.com/TheAthleticUK