A Premier League footballer is abused every four minutes on Twitter – with eight of the 10 most abused players playing for Manchester United.

Harry Maguire, Cristiano Ronaldo and Bruno Fernandes were among the most abused Premier League players in the first five months of the 2021-22 season, a report by Ofcom and the Alan Turing Institute has found.

The study of 2.3m tweets sent in the aftermath of the Euro 2020 finals – which saw Marcus Rashford, Jadon Sancho and Bukayo Saka abused online after missing penalties for England – found on average 362 abusive tweets were sent daily, with seven in 10 Premier League players on Twitter abused.

Around one in 12 abusive tweets targeted a victim’s protected characteristic, such as their race or gender. 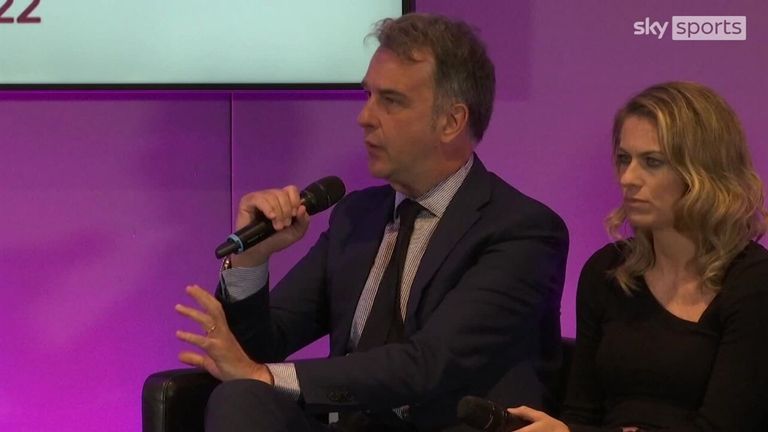 Director at FIFA, Michele Uva and former England international Karen Carney have helped to launch a campaign that looks at tackling online abuse

Maguire was second, receiving 8,954 abusive messages, which worked out at 14.90 percent of the tweets he received. Many of these messages were sent in response to an apology tweet he made following a defeat to Manchester City.

The player who received the most abuse as a percentage of all of the messages directed at him was Ciaran Clark, at 34.1 per cent.

The Newcastle defender was sent off against Norwich City in November and 78 per cent of all the abusive tweets he received came on this day, most of them appearing to be from fans of his own club.

The tweets were “attacking his perceived poor performance, with many suggesting he should ‘get out’ of the club. A small number of tweets focused on his nationality,” found the study.

It added: “Otherwise, Ciaran Clark does not receive many tweets compared to other players.”

The next most abused player was Crystal Palace’s James McArthur, who was given a yellow card after stepping on Saka’s leg. “Users who appear to be Arsenal fans used insults to refer to James McArthur,” the report said.

Kevin Bakhurst, Ofcom’s group director for broadcasting and online content, said: “These findings shed light on a dark side to the beautiful game. Online abuse has no place in sport, nor in wider society, and tackling it requires a team effort.

“Social media firms needn’t wait for new laws to make their sites and apps safer for users. When we become the regulator for online safety, tech companies will have to be really open about the steps they’re taking to protect users. We will expect them to design their services with safety in mind.

“Supporters can also play a positive role in protecting the game they love. Our research shows the vast majority of online fans behave responsibly, and as the new season kicks off we’re asking them to report unacceptable, abusive posts whenever they see them. “

Dr Bertie Vidgen, lead author of the report and head of online safety at The Alan Turing Institute, said: “These stark findings uncover the extent to which footballers are subjected to vile abuse across social media. Prominent players receive messages from thousands of accounts daily on some platforms, and it wouldn’t have been possible to find all the abuse without these innovative AI techniques .

“While tackling online abuse is difficult, we can’t leave it unchallenged. More must be done to stop the worst forms of content to ensure that players can do their job without being subjected to abuse.”

Sky Sports is committed to making skysports.com and our channels on social media platforms a place for comment and debate that is free of abuse, hate and profanity.

If you see a reply to Sky Sports posts and/or content with an expression of hate on the basis of race, sex, colour, gender, nationality, ethnicity, disability, religion, sexuality, age or class, please copy the URL to the hateful post and screengrab it and email us times.