The film critic Roger Ebert once described Transformers: Revenge of the Fallen as “a horrible experience of unbearable length, briefly punctuated by three or four amusing moments”.

Manchester United’s 2021-22 season was much the same; a noisy, juddering mess that cost hundreds of millions of pounds yet was frustratingly lightweight.

While many fans did not go into the campaign expecting high art, many finished it wondering why things were so drab and unenjoyable, rather than the fun that was initially glimpsed.

Here’s your review of the worst United season in Premier League history. Enjoy!

The opening day of the season brought with it fine weather, the unveiling of Raphael Varane and a 5-1 victory over Leeds United.

It was one of those days where everyone thought that, regardless of eventual league position and silverware challenges, United would be fun to watch this season. How naive we were.

It’s more than a moment (it certainly felt like it). Liverpool beat United 5-0 at home and 4-0 away and spent the closing minutes of each game circulating possession and conserving their energy for future matches.

There have been several weeks during which United fans have had to watch their team flounder while their historical rivals Liverpool and their geographical rivals in Manchester City set the benchmark for what is possible in club football. It has been a deeply humbling, and often humiliating, experience.

How bad the performances have been. Not simply in quality, but variety.

In the early months of the season, United played with a certain free energy to them but lacked the focus to control games. Ralf Rangnick replaced Ole Gunnar Solskjaer and, across January and February, the team had a more coherent plan as to how to win games but wasteful finishing left them off the pace in the top-four race.

There was the odd game towards the end of the season in which United appeared to finally apply the sort of sensible football Rangnick had been trying to conjure up for weeks, only to collapse in an embarrassing fashion against Brighton.

Last season United oscillated between a Great Entertainers side and a serious football team. This time, United confounded most conventional descriptions.

“I can not remember the last time I even smiled watching this team,” he said.

We’ll leave it there.

Goal of the season?

Jadon Sancho had far from a glittering debut season at United but his goal in the Manchester derby was a lovely moment in a galling 4-1 defeat. Sancho’s celebration, an insouciant shrug of the shoulders as he jogged to the corner flag, added gloss to the finish. 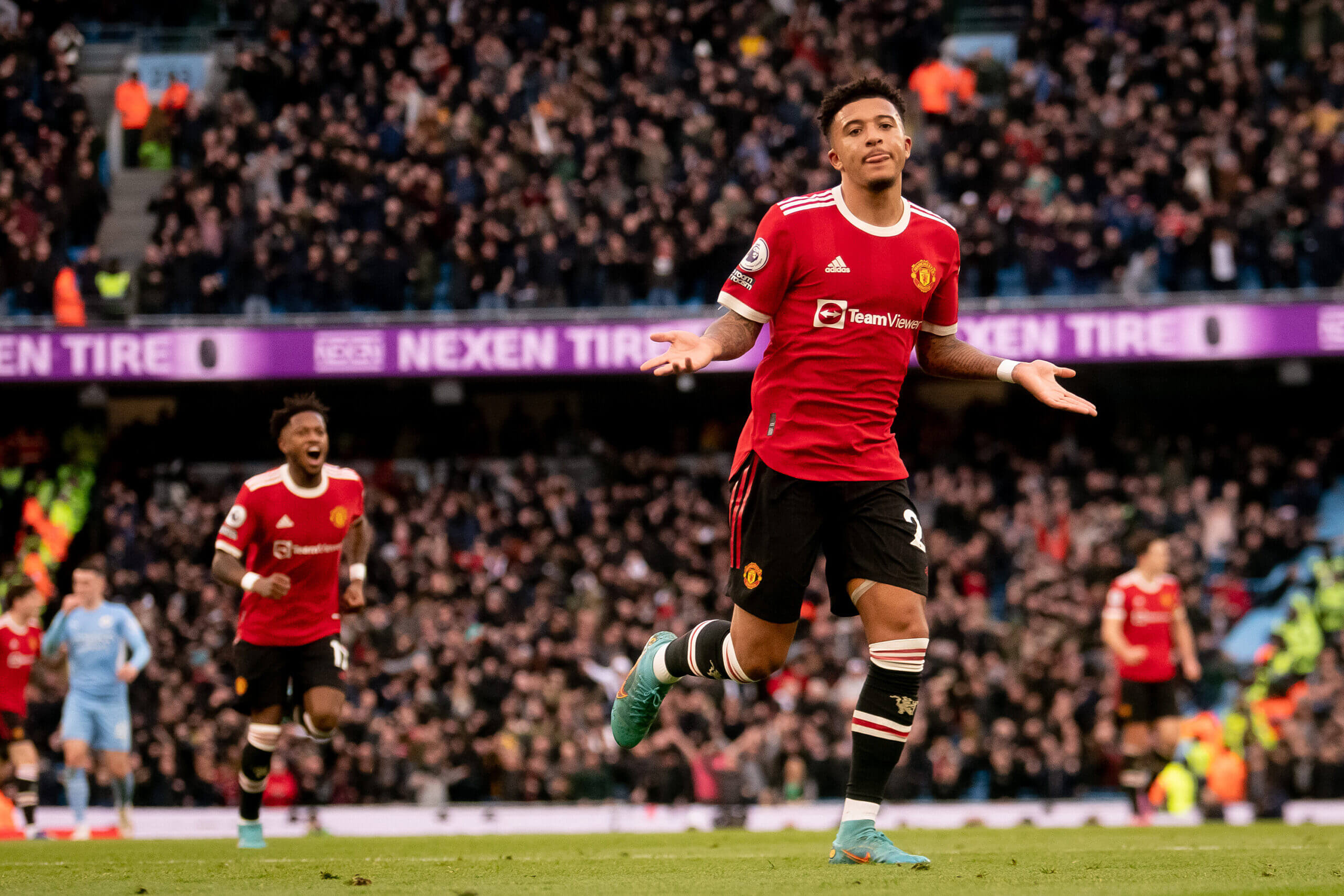 Sancho’s equalizer was the highlight of a galling defeat at the Etihad in March (Photo: Ash Donelon / Manchester United via Getty Images)

The 21-year-old did not kick on from that moment but there is a real talent there. Erik ten Hag will likely build a good part of United’s attack around it next season.

Game of the season?

United made hard work of Villarreal at Old Trafford in the Champions League group stage.

In what was a rematch of the 2021 Europa League final, many United fans expected Solskjaer’s retooled and replenished side to cruise to victory and get revenge for the events in Gdansk.

Instead, United (like many teams in Europe) underestimated Villarreal. Solskjaer’s men found themselves on the ropes for the better part of an hour as the Norwegian’s ambitious plans for full-backs Diogo Dalot and Alex Telles to drift into central midfield – Manchester City-style – looked woefully naive for Villarreal’s constant attacks.

But then Solskjaer’s United did what they often did: they found an opening. They got an equalizing goal through Telles from a set piece, before Cristiano Ronaldo grabbed a winner right at the end.

It was perhaps the last great victory of Solskjaer’s spell in charge.

Quote of the season?

Known in Germany for its often combustible and straight-talking nature, Rangnick’s press conferences were always going to be good value for the English media and alike fans.

The interim manager was not afraid to “say the quiet part aloud”, answering questions with a level of candidacy one would expect from an academic rather than a football manager. As such, his response to what must occur for United to be genuine title contenders again made for captivating reading and listening.

“You do not even need glasses to see and analyze where the problems are,” Rangnick said before the 3-1 away defeat by Arsenal. “Now it’s about: how do we solve them? It’s not enough to do some minor amendments, cosmetic things.

“In medicine, you would say that this is an operation of the open heart. If this happens and everyone has realized that this has to happen and if people want to work together then it makes sense and I believe it does not take two or three years to change those things. This can happen within one year. ”

Rangnick’s press conferences were more entertaining than the football his team played.

The pieces we most enjoyed writing…

We’ll throw this over to the Talk of the Devils podcast team.

Laurie Whitwell would like to direct you towards this piece on the end of Solskjaer’s reign, as well as this one on whether the Glazer family have kept their promises since the Super League fallout of 2021. You should also have a look at his interview with Mike Phelan.

Andy Mitten has done a number of fantastic interviews this year, so please enjoy his conversations with Nemanja Vidic and Frederic Veseli. His piece on why United fans continue to protest against the Glazers was also impressive and his argument for what development work Old Trafford needs is well worth your time.

Further afield, Daniel Taylor would like to recommend his feature on the late Jimmy Davis, along with a detailed piece on Callum Gribbin.

Oliver Kay started this season writing about “the Paul Pogba problem”, then Ronaldo in November and the state of interim managers in March.

Which GIF sums up your season?

Season nine, episode 19 of The Simpsons sees Homer enlist in the naval reserves. He impresses during sections of the training academy, but one moment sees him forget to do something important after tying a perfect sheepshank knot…

We’re glad that season is finally over. Good luck to Ten Hag…