Erik ten Hag’s Manchester United reign got off to the perfect start as he guided his new side to a 4-0 win over Liverpool in Bangkok.

Jadon Sancho, Fred and Anthony Martial all scored in the first half with Facundo Pellistri adding the fourth in the second period.

Of course it’s very early days but United fans will be hopeful following the first pre-season match. Here, Sportsmail’s Chris Wheeler looks at six things we learned from the encounter. 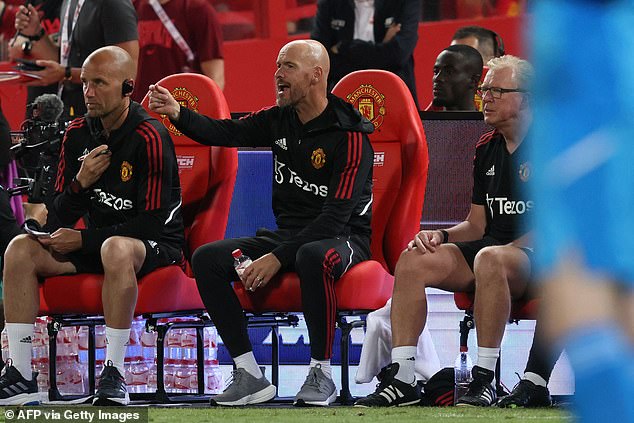 The United players are already buying into Erik ten Hag’s philosophy only after a week or two of training under the new manager. Many of the disciplines we saw being coached into the players in training on Monday were in evidence here.

Ralf Rangnick eventually accepted that United weren’t fit enough to execute a pressing game when he took over as interim manager last season, but they looked more up to the challenge in Bangkok – even Anthony Martial.

The Frenchman isn’t renowned for his ferocious work ethic, but it was him putting pressure on Rhys Williams in the 33rd minute that led to Martial winning the ball and racing away to score. He was still hunting down the ball in the stifling heat and harassing Williams at the end of the half. 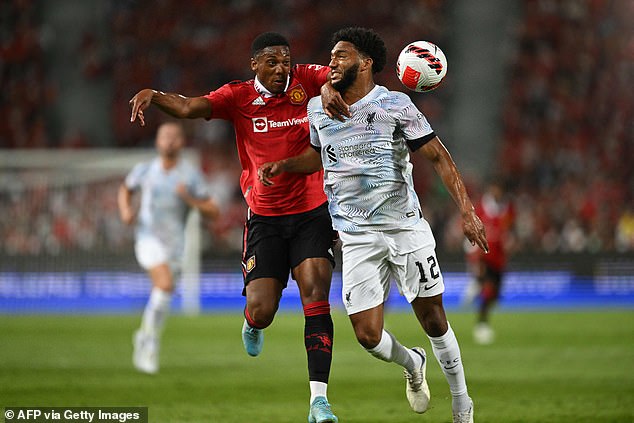 It will take time for United to get up to speed with a pressing game, and there were moments when they were opened up by Liverpool, but it was a promising start all the same.

Another aspect of Ten Hag’s tactics which has been missing in United’s game is to look for the forward pass wherever possible. The Dutchman wants his teams to be patient on the ball where needed and not give it away, but it was clear here that they were looking to get it forward too.

Probably the best moment came in the 36th minute when Bruno Fernandes split Liverpool apart with a first-time crossfield pass that released Diogo Dalot. The defender should have squared the ball but instead took a touch and hit the woodwork.

THERE ARE GOALS BEYOND RONALDO

No-one can question Cristiano Ronaldo’s importance to United, and a total of 24 goals last season underline the point. But, rather like Zlatan Ibrahimovic in the 2016-17 season, the presence of such a powerful character tends to mean the ball going to them more often than not – usually to the detriment of their teammates.

There are goals to be found elsewhere in this United team and that was demonstrated as Jadon Sancho, Fred – with an uncharacteristically sumptuous chip – Martial and Facundo Pellistri got on the scoresheet in Bangkok. Marcus Rashford will be disappointed not to score as well from a great chance in the first half.

Make no mistake, United need Ronaldo or at least a replacement striker capable of getting well into double figures. But Ten Hag needs other players to contribute, and this result will do their confidence no harm at all. 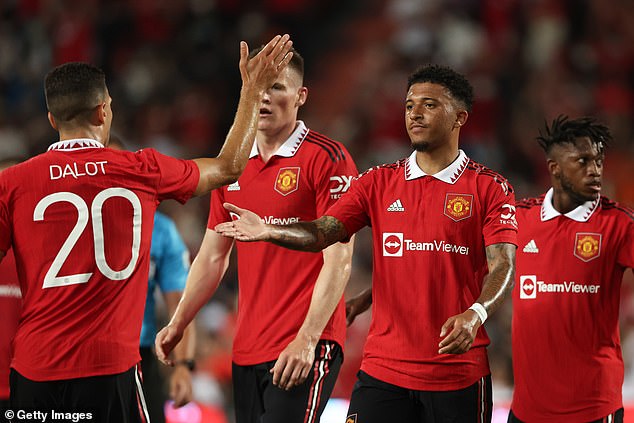 We really shouldn’t be reading too much into this game from a Liverpool point of view. Jurgen Klopp started with a weaker team than United, changed all 10 outfield players after half an hour and again on 60 minutes.

Of course, Liverpool would rather not be losing to Manchester United anywhere in the world – and certainly not 4-0 – but it will have absolutely no bearing on the new season. Liverpool will be a force to be reckoned with again and set the standards for all the other teams except, perhaps, Manchester City.

By the time the second half kicked off with United’s new XI facing the second of Klopp’s three teams on the night, the outcome of the match had become largely irrelevant. 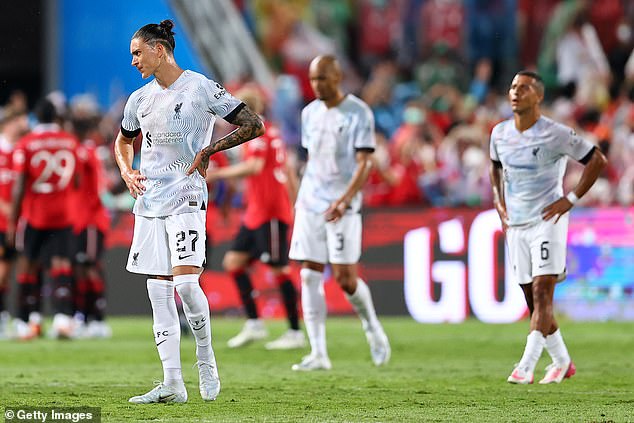 Not much can be read into it from a Liverpool point of view, even though they were thrashed

NEW LEASE OF LIFE FOR BAILLY

Eric Bailly has become the forgotten man of Manchester United but he took the opportunity to show Ten Hag why United paid Villarreal £30m for him six years ago.

Bailly’s time at Old Trafford looks to be coming to an end. United have three senior centre-backs in Raphael Varane, Harry Maguire and Victor Lindelof, and are looking to buy a fourth after bidding £43m for Ajax defender Lisandro Martinez.

But Bailly again showed what he’s capable of in the second half as a weaker United team came under more pressure, reading the game and making a number of vital interceptions. One of them led to United’s fourth goal in the 77th minute as he won the ball and then charged forward over halfway before Facundo Pellistri scored.

The combative Ivorian needed treatment after getting his head in the way of a Trent Alexander-Arnold free-kick. Of course he did. It’s easy to see why he still has a healthy fan club at United. 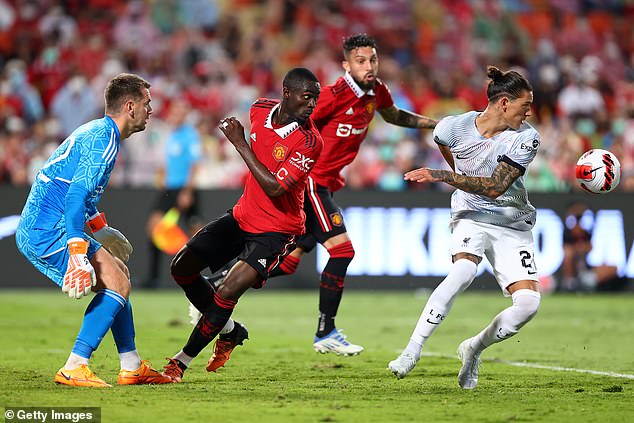 We’ll give Darwin Nunez the benefit of the doubt and blame his miss in the 88th minute on blisters. Liverpool’s record £85 million signing was forced out of training on Monday due to the problem on his left foot, and when opportunity knocked on his debut in Bangkok with Liverpool 4-0 down, he was found wanting.

Mo Salah curled a teasing shot beyond Tom Heaton but it came back off the far post and landed at Nunez’s feet. The Uruguay striker had the goal at his mercy but fired over. It was not dissimilar to an equally poor miss in training before the blisters took hold.

Liverpool can only hope the former Benfica player makes as big an impact as their last signing from Portugal, Luis Diaz, who was sensational after moving to Anfield from FC Porto in January.

Diaz was excellent here too, electrifying the stadium almost every time he got the ball during his half hour on the pitch. It was almost rewarded with a goal but he was one of two Liverpool players to hit the post in the 18th minute when he beat David de Gea with a curling shot from 25 yards. 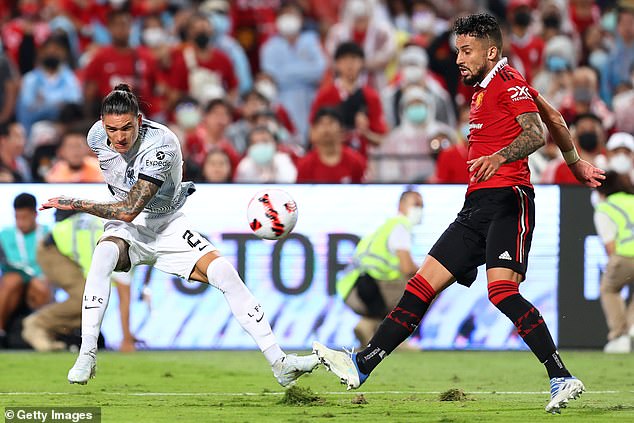 Liverpool can only hope Darwin Nunez makes as big an impact as the last signing, Luis Diaz

LIVERPOOL FANS TURNED OUT IN FORCE

Liverpool just about edged the contest in the popularity stakes if the noise inside the Rajamangala Stadium was anything to go by.

It rose noticeably before kick-off when the cameras focused on a grinning Jurgen Klopp sat in the dugout, and the pictures were projected onto the big screen.

These are the two most popular Premier League clubs in the Far East by some distance. But there seemed to be more excitement among the crowd when Liverpool attacked and, particularly, when Salah and Nunez came on in the 60th minute.

The singing needs a little bit of work, however, if the chants of ‘Liverpool’ and ‘Allez, allez, allez’ were anything to go by. 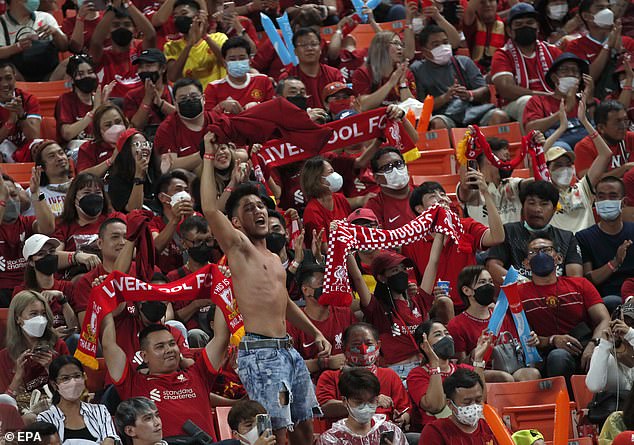