Todd Boehly thinks a North vs South All-Star Game would be a good idea. But who should make the teams if it was to come to fruition?

In a good old-fashioned 4-4-2, we pick both sides based on their average match ratings, courtesy of WhoScored.

Goalkeeper – Nick Pope (North) and Bernd Leno (South)
The first of many Newcastle United players to make the north team, Nick Pope has the best rating out of any goalkeeper in the Premier League (7.27).

Fulham shot-stopper Bernd Leno is pretty close with an average match rating of 7.25. He is likely to play a big part in the Cottagers’ bid to stay in the top flight having been picked up for a measly £3 million from London rivals Arsenal.

Right-back – Kieran Trippier (North) and Reece James (South)
After returning to the Premier League in January, Kieran Trippier has been brilliant for Newcastle. The Magpies have started the season really solidly at the back and Trippier is comfortably their best defender going forward, as well as being a threat when standing over a set-piece, which has contributed towards his brilliant 7.37 rating.

With a 7.29 rating, Chelsea’s Reece James starts at right-back for the south team. If this wasn’t based on algorithms, James would have been in the starting XI anyway. He is brilliant.

Fabian Schar – whose average rating is 7.45 – penned a new two-year contract in April and has repaid the club’s faith with some brilliant performances to start the season. His goal on the opening day of the campaign against Nottingham Forest was an absolute beauty and scarily similar to his strike against Burnley in 2019.

The second Chelsea man in a row, and the second player who I would have picked anyway, Thiago Silva is averaging a 7.19 average match rating despite the Blues’ defensive struggles in 2022/23. Just don’t mention the Champions League.

Centre-back – Pascal Struijk (North) Joachim Andersen (South)
Leeds United defender Pascal Struijk is perhaps a surprise inclusion but his 7.11 rating gets him in the north team alongside Schar. Something tells me the southern strikers would be licking their lips here. But, as they say, stats don’t lie.

Joachim Andersen started the season on the right foot with his majestic long passing in Crystal Palace’s home loss against Arsenal on the opening night. The loss was not important. It was his passing display that really mattered.

The Danish defender’s rating (7.27) is slightly better than Silva’s and Struijk’s.

Left-back – Joao Cancelo (North) and Oleksandr Zinchenko (South)
Joao Cancelo has filled in as Manchester City’s first-choice left-back very nicely and is now comfortably the best in that position in the Premier League. The Portuguese is averaging 7.32 so far and it would not be a surprise if it rises as the season goes on.

From a City star to a former City star – Oleksandr Zinchenko joined Arsenal for around £30m in the summer transfer window and has been really impressive.

He has seamlessly slotted into Mikel Arteta’s system and the Ukrainian’s 6.95 rating is perhaps a little harsh.

Right-midfield – Mohamed Salah (North) and Wilfried Zaha (South)
To be completely honest, Mohamed Salah’s inclusion is quite surprising. The Egyptian forward is the highest-rated right-midfielder/winger (7.28) in the division despite his substandard start to the campaign.

Although Wilfried Zaha does not usually play on the right, he gets in this team because he can obviously play there. His 7.36 rating is higher than Salah’s, so I guess I kind of lied a second ago.

Arsenal captain Martin Odegaard would line up for the south XI thanks to his 7.38 rating. He is one of three Gunners to make the team, with Arteta’s side sitting top of the table with 15 points from a possible 18.

Central midfield – Joelinton (North) and Pierre-Emile Hojbjerg (South)
Newcastle are back in business with the completely transformed Joelinton getting into the midfield alongside De Bruyne. The Brazilian was signed for a club-record £40m fee in 2019 and was pretty terrible. However, he has gone from being a stumbling striker to a monster in midfield.

Joelinton’s 7.42 match rating is another symbol of how much his game has improved. He still can’t shoot, mind.

Pierre-Emile Hojbjerg has apparently been better than Joelinton this season, but only just, with a 7.44 rating.

A midfield pairing of the Tottenham man and Odegaard is pretty nicely balanced, and the same can probably be said about Joelinton and De Bruyne, who both have a lot of energy and power. 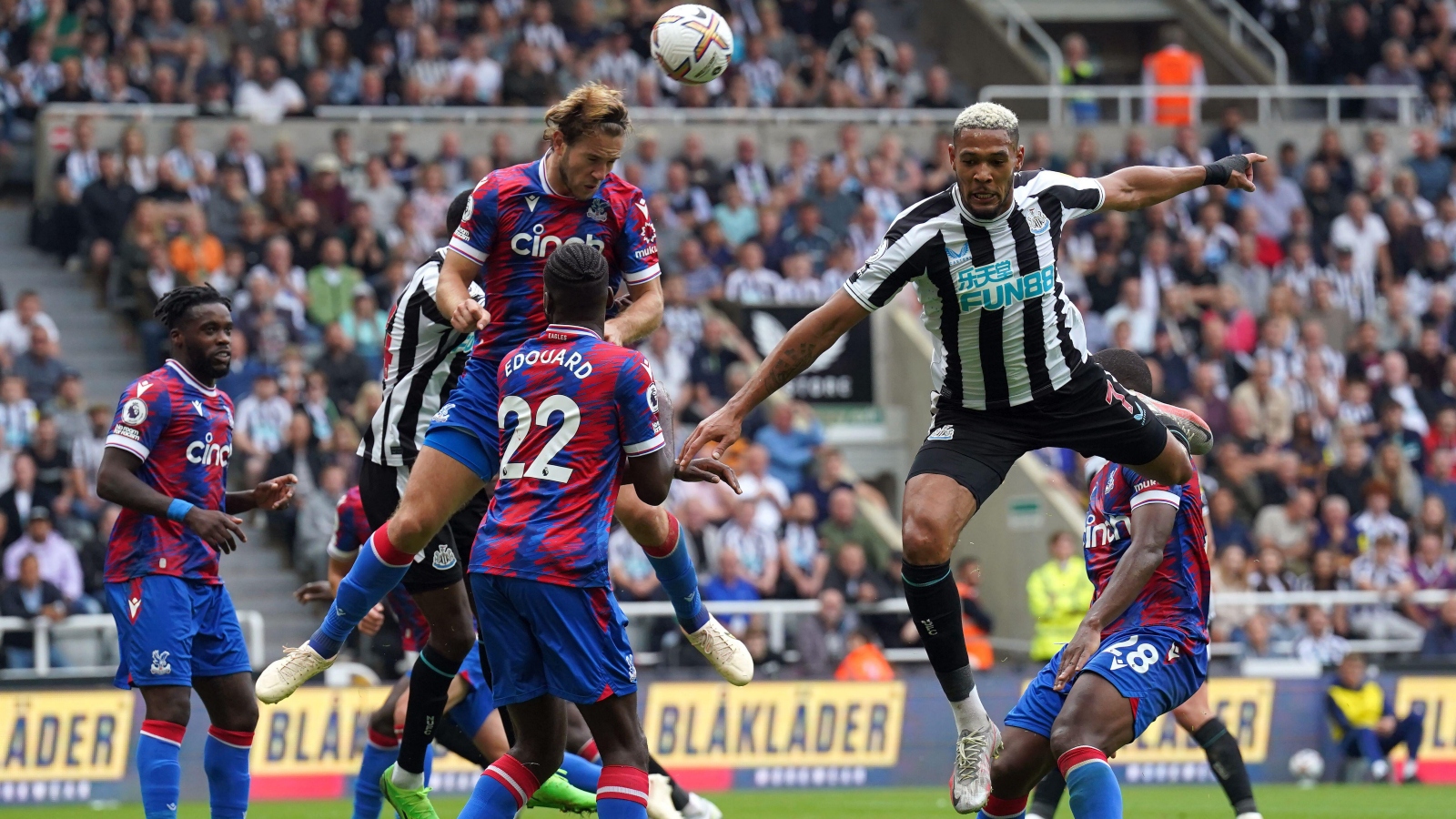 One goal and two assists in four games mean Saint-Maximin has a 7.67 rating, which is really superb.

Seeing the Frenchman in an All-Star Game would be perfect; it would be rainbow flicks galore.

Gabriel Martinelli is a pretty exciting inclusion as well. He has a 7.48 match rating having scored three in six for Arsenal this term. Should it have been four after his disallowed goal against Manchester United? Probably.

Striker – Erling Haaland (North) and Ivan Toney (South)
Erling Haaland has the best average rating in the Premier League (8.2), which is not a shock by any stretch of the imagination.

The City youngster is taking the p*ss already with ten goals in six games. He is a joke.

Ivan Toney deserves an All-Star berth – and England place – for his start to the season, there is no doubt about that. His 10/10 performance against Leeds boosted his average rating up to 7.76.

The 26-year-old is the only Brentford man in the team, with the Bees currently eighth in the top flight.

Striker – Roberto Firmino (North) and Aleksandar Mitrovic (South)
Liverpool’s poor start to the season has not stopped two of their players from getting in the north team.

Roberto Firmino has six goal contributions in four games, propelling him to a 7.53 average rating. His stellar start has earned him a call-up to the Brazil squad for the first time since July 2021.

Aleksandar Mitrovic (7.88 rating) has struggled to show he belongs in the Premier League in previous campaigns, but his start to the season for Fulham has been magnificent. He has scored six goals in as many matches as he joins his teammate Leno in the south squad by forming an intimidating partnership with Toney, who will be buzzing to play with his idol.