Manchester City retained their Premier League in extraordinary circumstances after coming from two goals down to beat Aston Villa 3-2 at the Etihad Stadium.

Three goals in five minutes late in the game turned the match – and the title race – on its head as substitute Ilkay Gundogan scored two, either side of Rodri’s strike. Liverpool’s late win over Wolves meant that only victory would have been enough for City.

It was an extraordinary way to do it, almost as remarkable in its own way as events a decade ago when Sergio Aguero won the title in stoppage-time. City had looked a beaten side when Philippe Coutinho added to Matty Cash’s opener midway through the second half.

Man of the match: Ilkay Gundogan.

Aston Villa boss Steven Gerrard was set to add to his Anfield legend. Instead, amid a raucous atmosphere at the Etihad, it was Pep Guardiola and his players celebrating ecstatically upon the final whistle. Twists and turns had been expected. But surely not this.

How Man City sealed the title in astonishing fashion

There had been nerves beforehand, of course, memories still fresh of the final-day drama against Queens Park Rangers one decade ago when the routine win required turned out to be anything but. And so it proved again on a day that confounded expectations.

The first news was positive for City as Wolves took an early lead at Anfield where Liverpool needed victory to snaffle top spot from City’s grasp. It sparked wild celebrations, adding to an already raucous atmosphere. But the home side simply forgot to play.

Steven Gerrard mad two changes for Villa with no Emiliano Martinez in the squad. Robert Olsen came in between the sticks for his Villa debut. Also, Phillipe Coutinho replaced Carney Chukwuemeka.

They mustered only one shot on target in the first half and were punished by a slick Villa move that was started by Jacob Ramsey and finished by the head of Cash, with Lucas Digne providing the left-wing cross that left much of the Etihad Stadium in stunned silence.

The anxiety in the stands was palpable thereafter and the response from City did not come immediately – Ollie Watkins and Coutinho having presentable opportunities to double the advantage. With Liverpool having equalized the title was in the balance.

The introduction of Oleksandr Zinchenko for Fernandinho helped City look more fluid in the second half and the impetus was with them from the outset but the chances were missed. Kevin De Bruyne blazed over. Gabriel Jesus spooned his shot when just yards out.

The clock was ticking, the tension rising. And then came the sucker punch. A long ball and a moment of magic from Coutinho, dragging the ball one way and then reversing the shot beyond his compatriot Ederson to leave everyone in shock. City were bereft.

Remarkably, with Wolves still holding Liverpool, they were still on course to be champions on goal difference but that was not the mood at the Etihad until Gundogan altered the atmosphere in an instant. The substitute headed in and the game turned.

With Villa rocking now, the ball fell to Rodri on the edge of the box and he passed the ball into net from distance to draw level. Suddenly, it was one goal required to render events at Anfield redundant and the momentum felt irresistible once more.

De Bruyne found space in the right channel and his low cross found that man Gundogan at the far post to send the supporters at the Etihad Stadium into ecstasy. It was an inspired final substitution by Guardiola with Jack Grealish left on the bench.

Mohamed Salah and Andy Robertson’s late goals for Liverpool meant that there was still no margin for error but City were not going to make the same mistake, shutting down the game sensibly for the remaining moments as the relief began to pour down from the stands.

The supporters followed, rushing the pitch upon the final whistle. Another unforgettable afternoon for the supporters of a club that only seems to do dramatic.

It seems strange to cite an occasion when Manchester City almost blew the title as Pep Guardiola’s greatest moment as their manager but for all the wonderful football, for all the dominance that has led to four Premier League titles in five seasons, this was different.

It was magical and Guardiola had perhaps sensed it beforehand. His program notes alluded to those memorable moments of the past, perhaps craving one of his own.

“How many times in our more than 100 years of history have we lived what we are going to live this afternoon together? How many? At Brighton three years ago? The historical Sergio 93:20 moment? Paul Dickov at Wembley in 99… Yes … A few times in our lives. “

This was something of that ilk – even ending in the same 3-2 result that did for QPR in such crazy circumstances inside the same stadium one decade ago.

A football club is the sum of the stories it tells about itself. This will go down in lore, adding to the belief that anything is possible. They will talk about it, write about it, sing about it. Guardiola’s team has done many things. It had never before done this.

Guardiola: Our goal changed everything 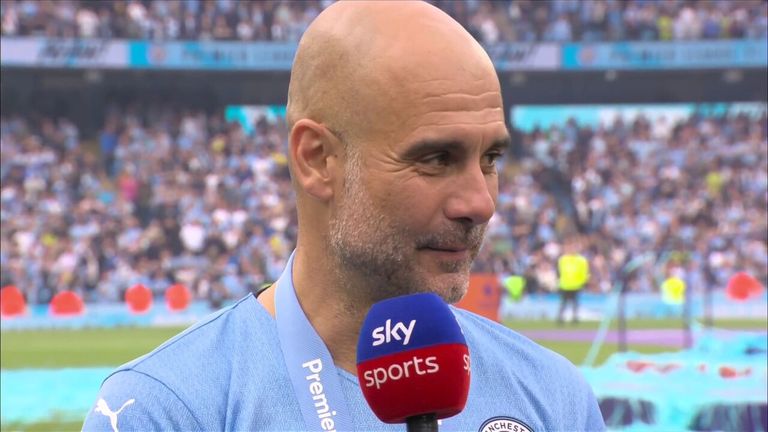 “The moment we found a goal it changed everything,” Guardiola told Sky Sports. “We are playing in not normal circumstances but you have to handle it.

“Gundogan is the best inside runner we have. We were arriving down the sides and we needed a player with the sense of tempo in the box and he’s the best.

“We are legends. When you win the Premier League four times in five seasons it’s because these guys are so, so special. We will be remembered. The first title we won with lots of margin, then at Brighton, then winning at home without fans and now with people, it’s the best.

Gary Neville: “An incredible football season. Congratulations to Manchester City and Liverpool. Head to head all the way through – brilliant, relentless.

“You won’t get a better Premier League season than that.

“One of the images of Pep Guardiola’s career will be him in tears at the final whistle today because he knows how hard his team have had to work to get there.

“What more can he achieve? He can not achieve any more than coming back every single day and doing it over and over again. An outstanding manager with an unbelievable mentality.

Roy Keane: “This City group keeps going until the end. When you’re two goals down and need to turn it around – absolutely outstanding. All credit to City. All brilliant teams find a way to win.”

Micah Richards: “You’re sitting there thinking it’s going to be Liverpool’s time. They’re going to get the three points and go and play Real Madrid [in the Champions League final] to potentially get the fourth.

“But this team fights to the end. The spirit in this stadium was down in the dumps, but when they got that first goal it turned and I started to believe.”

Jamie Redknapp: “I look at this team and have so much admiration for the club and manager. They’ve got everything right – the mentality from the top to the bottom.

“It takes something special to come from behind like they did today and that comes from the manager. It’s an incredible achievement.”