Last night, Liverpool chairman Tom Werner sent a letter to French sports minister Amelie Oudea-Castera asking her to apologize for her comments about the alleged causes of a 37-minute delay to the start of the Champions League final.

Earlier on Monday, Oudea-Castera and the French interior minister Gerald Darmanin held a press conference where they blamed “British fans” for arriving late to the Stade de France, despite the enormous photographic and video evidence on the contrary. The pair also blamed “fake tickets”, claiming there were as many as 40,000 in circulation around the northern outskirts of Paris.

TIMES The Athletic looks at each of those claims, which do not align with the conclusions of Matthieu Valet, a spokesperson for France’s Independent Union of Police Commissioners, who believes local youths were responsible for causing the disruption…

French interior minister Gerald Darmanin: “At 21:00, when the match was supposed to start, 97 per cent of the Spanish supporters were present, only 50 per cent of the British supporters had got into their section, which does show the difficulties that arose only from the entrance relating to the Liverpool supporters and not the other entrances ”

While the numbers might tell the truth, the access points made it easier for Real Madrid fans to get into the stadium. This, however, ignores the reality that Real fans faced their own problems at security, with supporters telling Spanish media about their anger at dismal policing, stolen tickets and violent attacks on their way to the game, as well as on their way out of the stadium.

Before kick-off, while Real fans came from the north from their fan park at Parc de la Legion d’Honneur, just 1.5km away, and experienced a ticket check where there were lots of space and enough stewards and police to deal with any approach, the geography at the other end of the ground where Liverpool supporters were meant to be situated at kick-off time invited huge challenges.

There were far more than just the 20,000 Liverpool fans traveling from the center of Paris, because many thousands of fans in the neutral parts of the ground as well as some Real fans who did not attend their fanzone, and journalists, used the same RER line and the same metro stop. From the metro, there was just one route to the “Stade”, which was supposed to take 17 minutes but for many took as long as three hours.

From the metro, Liverpool fans, Real Madrid fans and “neutrals” were directed to a narrow passageway on the side of a dual carriageway where police vans clogged up lots of space. Three hours before kick-off the build-up had already reached an uncomfortable level. The Athletic’s James Pearce and Oliver Kay traveled separately but had exactly the same experiences. Concerned about the pressure in the crowd, both managed to climb over a barrier before approaching the Stade de France. 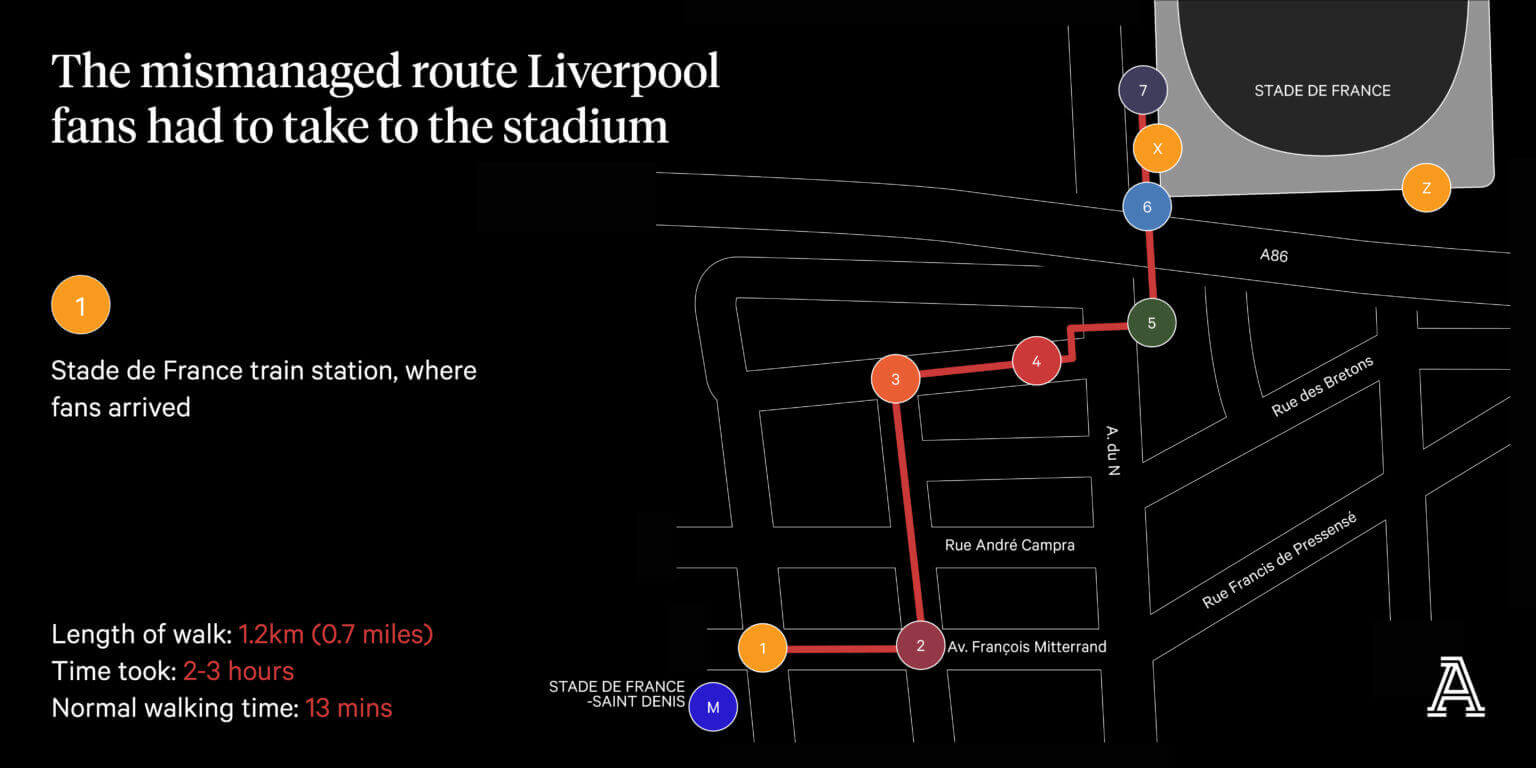 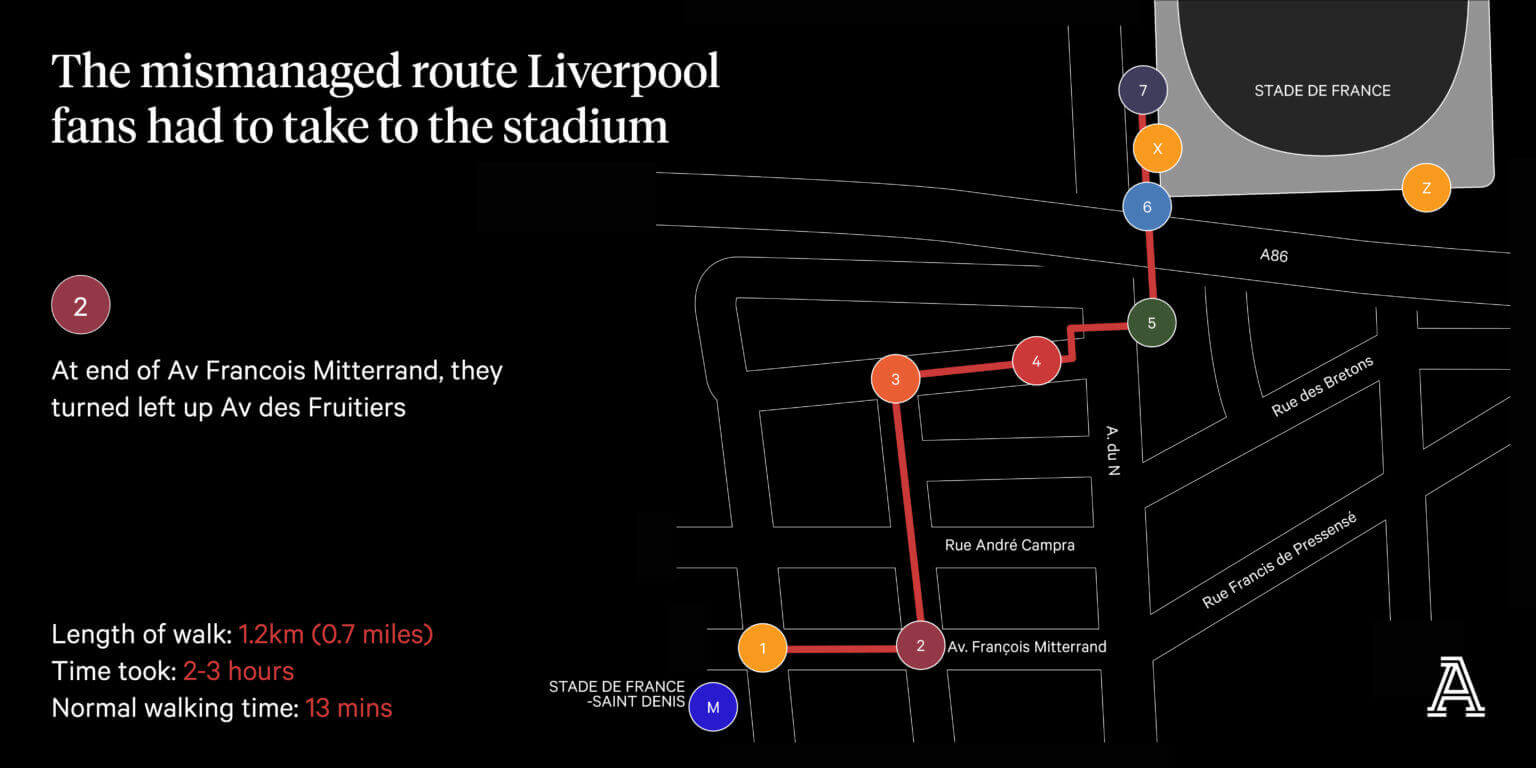 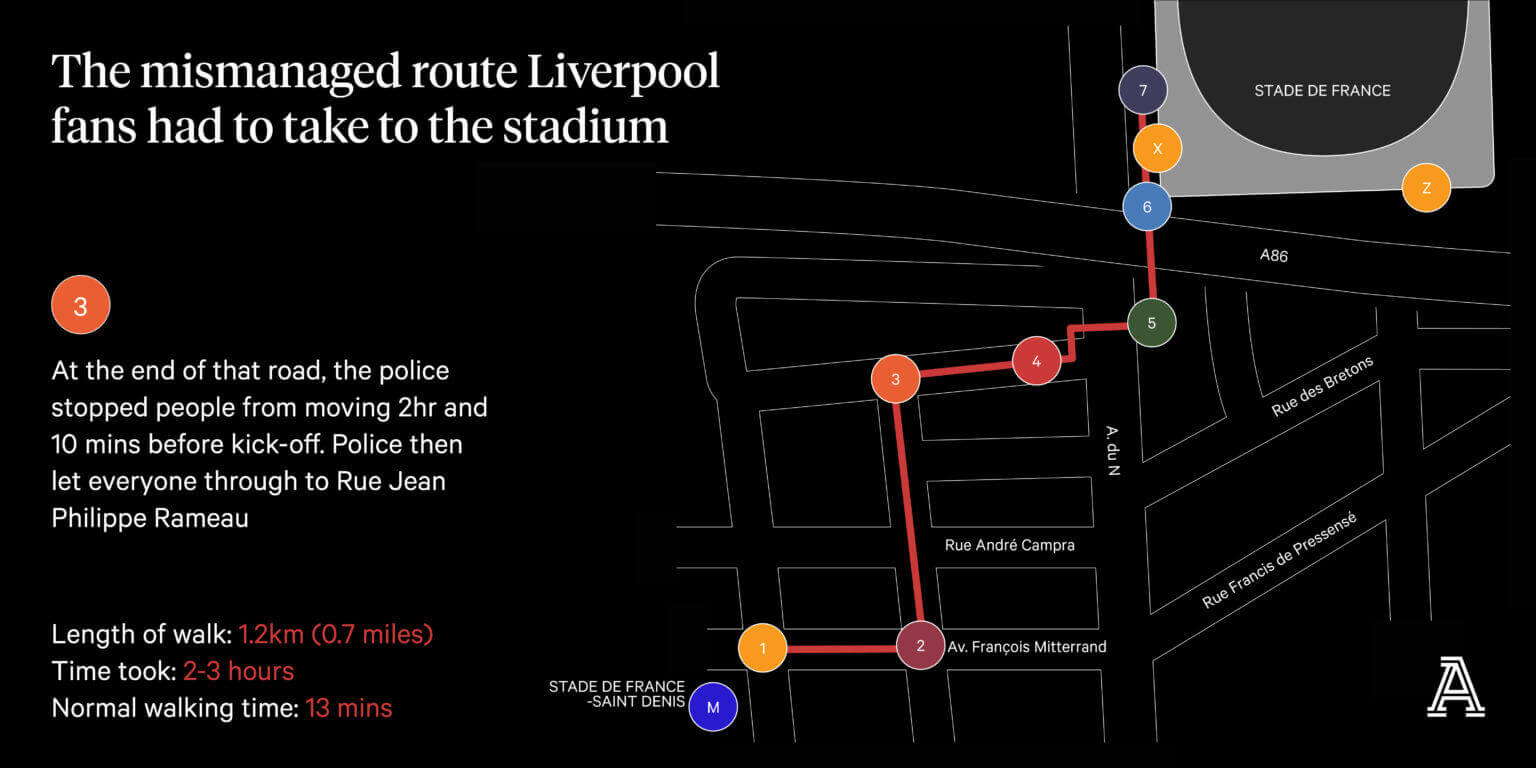 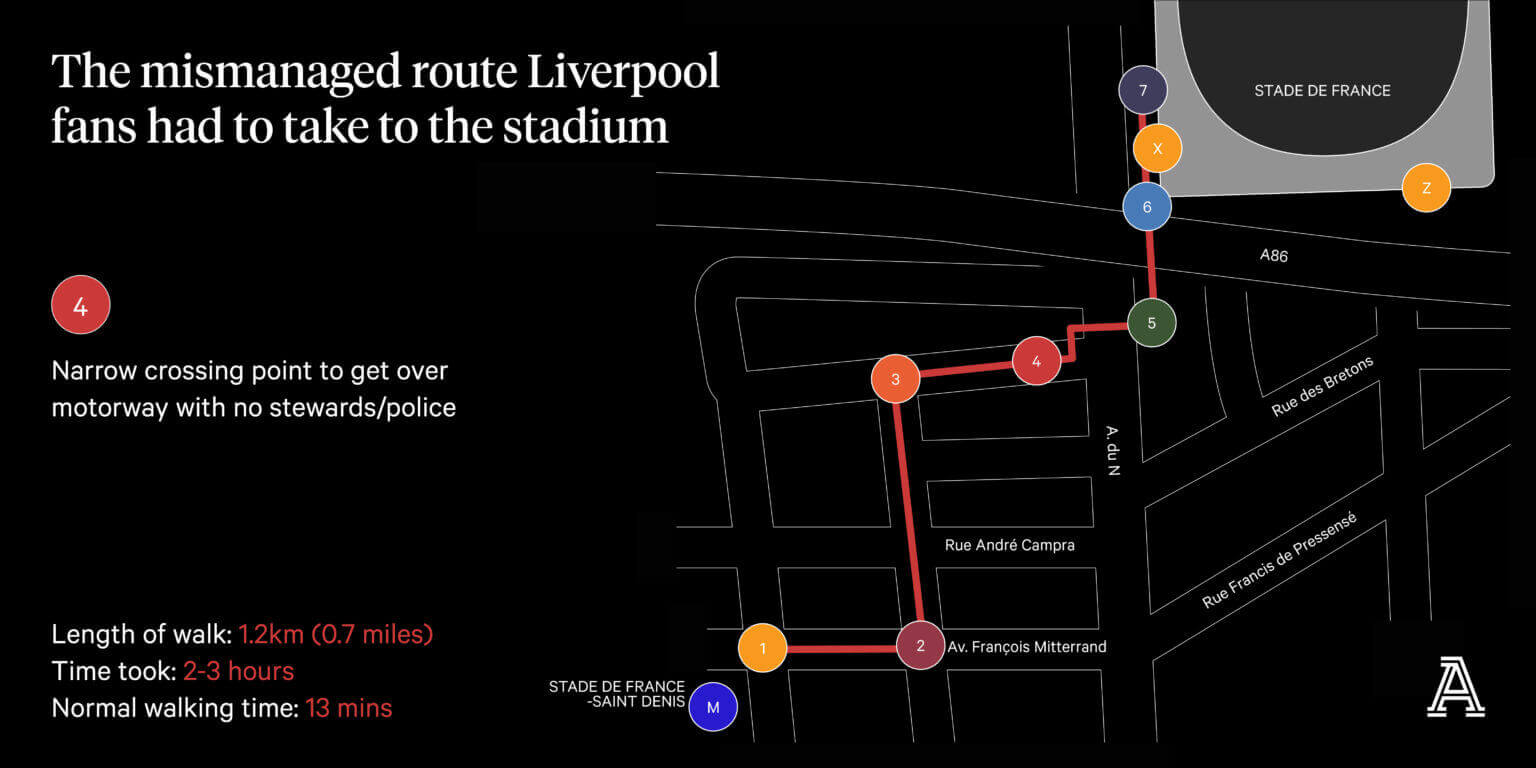 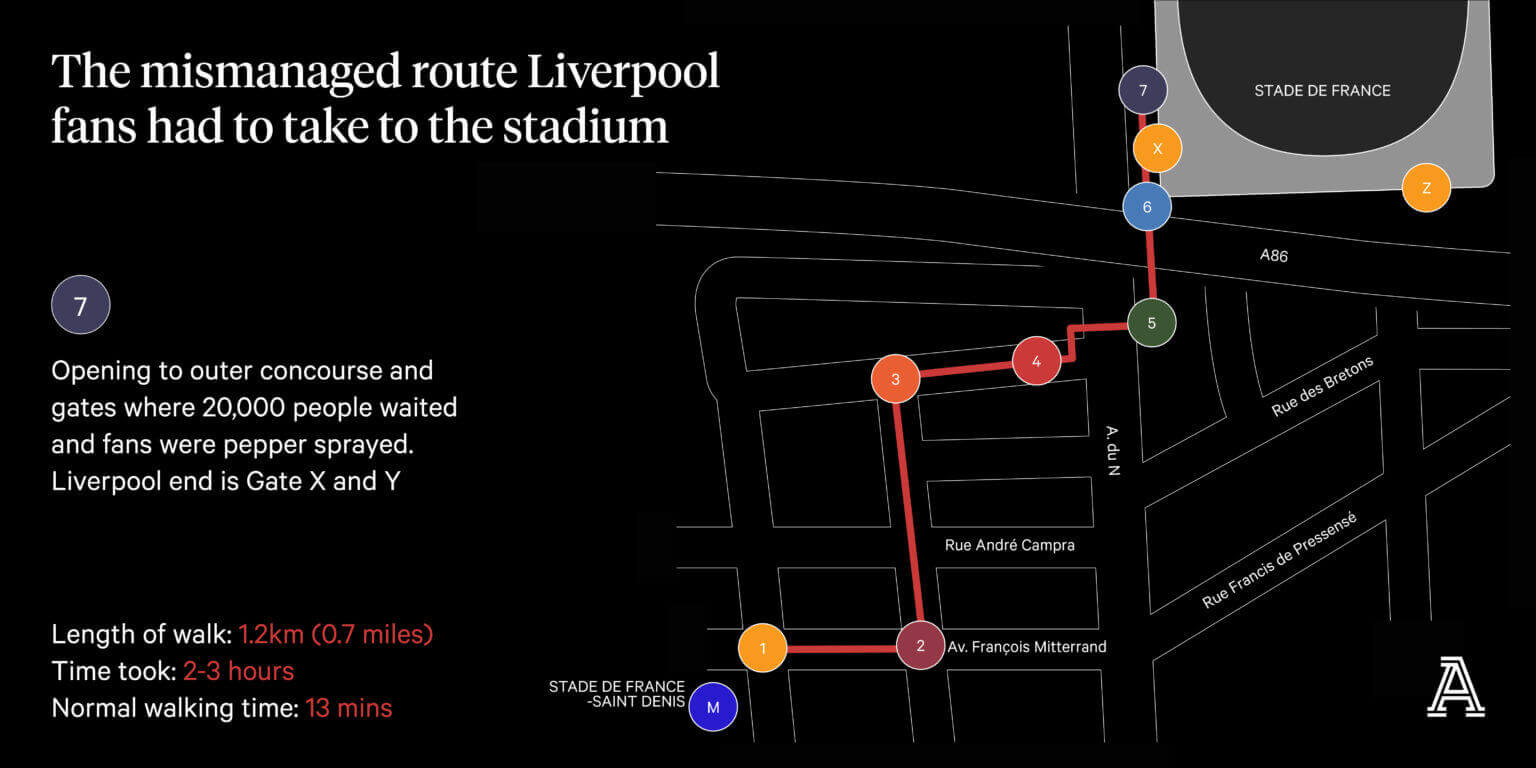 After walking around the stadium to reach the accreditation center, it became clear that Real Madrid fans were not facing the same geographical issues. The Athletic’s Caoimhe O’Neill, who approached the stadium via the Real end because her ticket was in a neutral zone, experienced two ticket checks, one by the police and another by stewards.

Darmanin: “There was massive fraud to an industrial level and organization of fake tickets because the pre-filtering by the Stade de France and the French football federation saw that 70 per cent of tickets were fake.”

By simple mathematics, this is impossible because it would mean more than 40,000 fake tickets were in circulation. For the authorities to know that, in a three-hour period the low end of this estimate would require 167 people to be trying to get in illegally per minute. Or, roughly three people per second.

There’s no doubt there were some fake tickets in circulation, but the numbers the French government are talking about do not seem remotely credible.

Dan Nicolson, who has run big events aimed at Liverpool’s supporter base, says the claim is absurd. “To shift tens of thousands of units of anything in just three weeks is exceptional business. If you’re doing that offline without retail outlets you’d need a network of at least 500 willing people doing an average of 80 tickets each. “

If a forged ticket operation were to be launched online instead, Nicolson believes scammers would need a fulfillment service to rival some of Europe’s biggest e-commerce operations, while avoiding the attention of the authorities over a three-week period. “It is not happening,” he said. 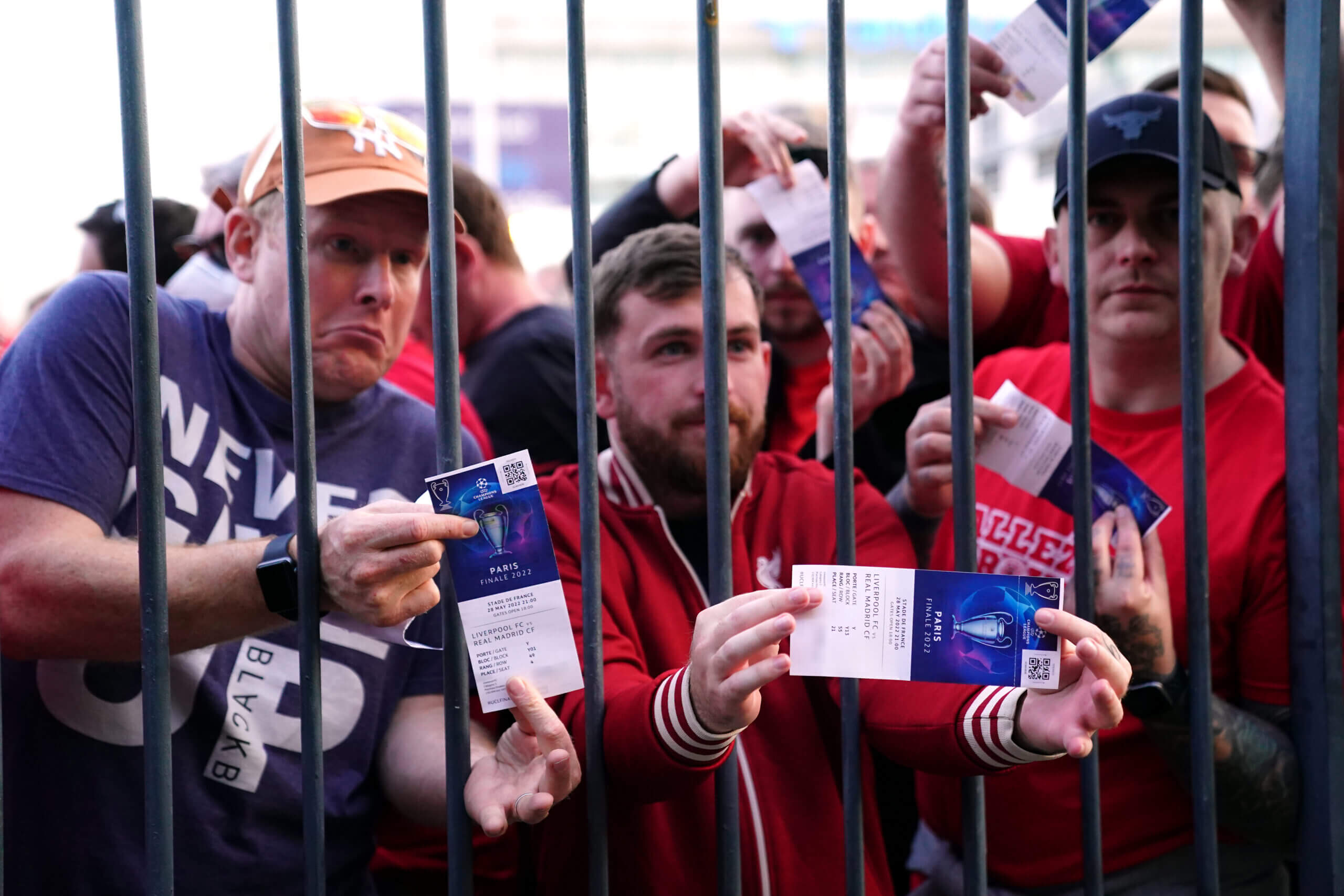 Darmanin: “Once through the pre-filtering stage, 15 per cent of tickets were fake, more than 2,600 were non-validated tickets even though they’d gone through the first filtering.”

The French interior minister would have this information had the security operation not collapsed two hours before kick-off when stewards in many areas gave up on checking tickets.

At the first ticket checkpoint at the Liverpool end, thousands were let through with no ticket checks one hour and 20 minutes before kick-off as the authorities lost control of its own operation – seemingly in an attempt to release pressure because of the huge queues that had developed over the previous three hours.

The Athletic’s Simon Hughes was there when this happened and his ticket was not validated until he reached the first gate. He has since been told by other fans that scanning devices used to validate mobile tickets at the failed checkpoint stopped working and this meant the authorities were not able to regulate who was entering efficiently, adding to the subsequent delays at the gates.

The numbers here would suggest a huge number of people were being turned away at the pre-filtering stage. Oliver Kay was waiting at a checkpoint for nearly an hour when tickets were being inspected and he did not see a single person being turned away. A friend says he was held there for two hours and saw about 10 people turned away with fake tickets.

James Pearce, meanwhile, has friends who were in possession of genuine tickets only to be told they were fake. They would not scan after three or four attempts.

Darmanin: “The massive presence of these fake tickets was the issue which meant there were delays. There were 29 arrests that took place within the Stade de France and more than half of those arrests were British supporters because they’d intruded inside the Stade de France. “

Various numbers have emerged since Saturday evening. The French media reported on Saturday evening that there had been 105 arrests. Now they are suggesting there were 29 within the stadium and that “more than half” were British.

So far, it has not explained why these people were arrested. The background of the non-British arrests has not been revealed, either. It is clear from video footage, widely available on social media, that there were locals who got into the stadium without tickets. There have also been numerous accounts of fans of both clubs being set upon by local gangs.

The two flare-ups that Kay witnessed outside the ground involved locals rather than fans of either club. Valet, spokesperson for France’s Independent Union of Police Commissioners, spoke about “professional thugs, mostly minors” who “wanted to break into the stadium and give the police a hard time”. Fans who were at the turnstiles have said similar. But the French government has glossed over this.

French sports minister Amelie Oudea-Castera: “The major central point is to really understand exactly what happened during this massive fraud as far as the ticketing is concerned. There are witnesses of this and figures corroborate that 30,000 to 40,000 without tickets or with fake tickets. The fake tickets looked incredibly like normal tickets which meant some controls did not notice it. ”

Of course, it’s important to understand what happened. And that applies not just to the “massive fraud” the sports minister claims but to the inadequate security arrangements which were undoubtedly a very significant factor in the chaos.

Late last night, UEFA announced an “independent report” would be carried out by Dr Tiago Brandao Rodrigues, a Portuguese MP. A UEFA statement suggested that evidence “will be collected from all relevant parties”.

For this to be done comprehensively, this will surely have to involve consultation with the thousands upon thousands of fans and media who were held up at the first “pre-filtering” point where lots of the problems began.