Liverpool finished a memorable domestic season with a 3-1 win over Wolves at Anfield – although on a rollercoaster of a final day, that was not quite enough to turn the title race, with Manchester City eventually beating Aston Villa at the Etihad 3- 2 to be crowned champions by a point.

The Reds never hit top spot but incredibly looked primed to go on and pull off a historic triumph when they were level on points with City, after recovering from Pedro Neto’s shock opener with a Sadio Mane strike and Villa going 2-0 up in Manchester.

With Philippe Coutinho on the scoresheet at the Etihad and Steven Gerrard in the dugout as Villa boss, it seemed Liverpool’s old guard were delivering the favors the Reds’ supporters had dreamed of.

Anfield was electric at that point but City brilliantly fought back to win the race for the crown.

Golden-boot winner Mohamed Salah and Andy Robertson struck late on to ensure it was at least victory on the pitch for Liverpool, with their supporters paying tribute to a side which has lifted the Carabao Cup and FA Cup this season and closed what was once a 14-point deficit with two games in hand on City in January with a remarkable 19-game unbeaten run. 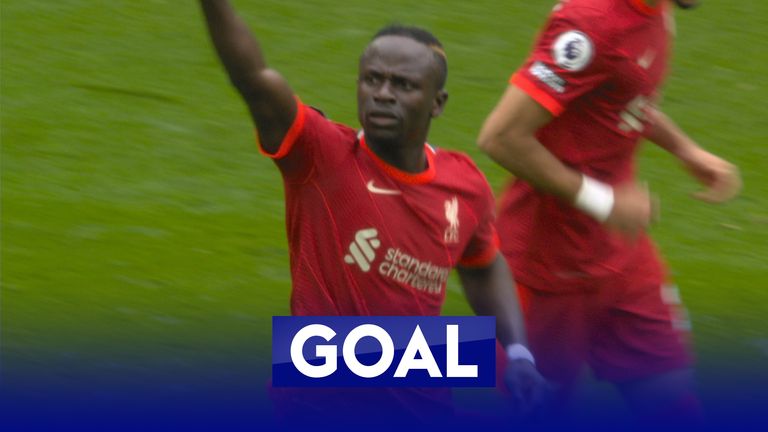 Liverpool level as Mane races through to score 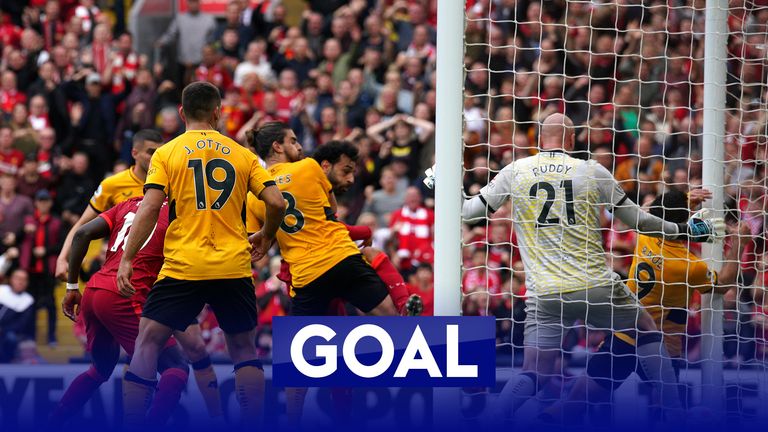 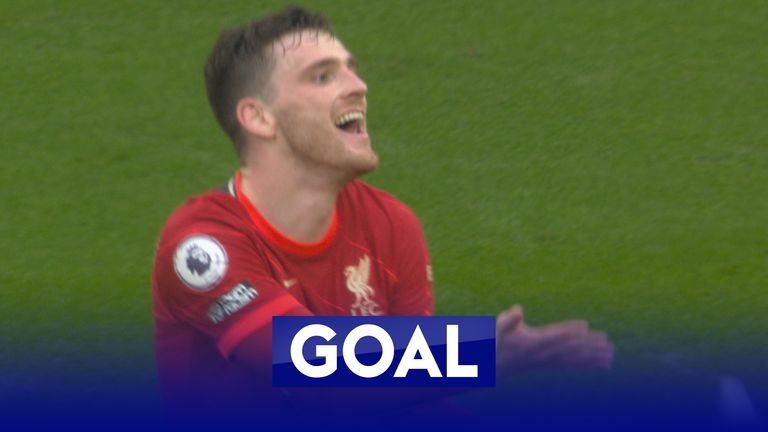 It was also some send off for a Liverpool team who now look ahead to Saturday’s Champions League final with Real Madrid in Paris, where more glory and silverware beckons, although the unprecedented quadruple is now out of their reach.

The win means Liverpool finish their Premier League campaign with 92 points, enough to win the title in 24 of the previous 29 seasons, while 23-goal Salah shared the top scorer prize with Heung-Min Son of Tottenham and Alisson finished tied with City’s Ederson for the golden glove with 20 shutouts.

The victory also secures an unbeaten season at home for Liverpool, for the fourth time in five years, with Wolves losing an 11th Premier League game in a row against the Reds.

Bruno Lage’s side have failed to win any of their final seven matches but finish 10th, with six points more than last season.

Man of the match: Sadio Mane

A rollercoaster of a final day …

A fog of red flares had greeted the team buses outside Anfield before kick-off but Wolves hadn’t read the script, with Raul Jimenez exploiting a gaping space left by Ibrahima Konate to cross for Neto to slot in a shock opener for the visitors. It was the Wolves’ supporters turn to be heard, with a gold flare delaying the re-start.

Liverpool’s response was unsurprisingly intense, with Joel Matip heading wide and Luis Diaz seeing a penalty shout waved away before crossing through the six-yard box. But Leander Dendoncker exposed the hosts’ defense again and should have made it 2-0 when Matip gave the ball away on halfway.

An injury to Neto on 20 minutes was a major blow for Wolves given the problems he’d caused early on and Liverpool were back level moments after he was subbed off, with a wonderful flick from Thiago sending Mane through to slot in his 16th of the season. “That’s out of this world from Thiago,” said Sky Sports’ Jamie Carragher.

Robertson volleyed over and Thiago shot wide as Liverpool pressed for a second and the atmosphere hit a whole new level when news of Matty Cash’s opener for Aston Villa at Man City filtered through. But still the Reds looked vulnerable, with Alisson having to save from sub Hwang Hee-Chan.

Thiago was forced off with injury on the stroke of half-time and replaced by James Milner but Wolves goalkeeper Jose Sa also needed to be changed at the break, with John Ruddy coming on. The replacement shot-stopper was beaten inside five minutes, with Mane slotting home again, although VAR spotted a clear offside.

Liverpool continued to pile forwards, with a fierce Diaz strike decking Conor Coady, and Salah was sent on to bolster the attack. Trent Alexander-Arnold drew a good stop from Ruddy and a superb tackle from Willy Boly denied Salah. News of Coutinho’s goal sent Liverpool hands onto Liverpool heads in disbelief. It was on – they just needed a goal. An Alexander-Arnold’s drive was blocked as Liverpool continued to bang at the door.

But then it all changed around, with Ilkay Gundogan, Rodri, and then Gundgoan again unbelievably switching the title race back into City’s favor with a three-goal salvo.

Salah grabbed his golden-boot sharing goal to give Liverpool hope – and there were celebrations when a false report of a Villa equalizer spread around the stadium. However, by the time Robertson made it 3-1 there was an acceptance Liverpool were going to fall just short in this race.

But two out of three trophies ain’t bad. And if they can make it three out of four on Saturday, then this will really be a special season to remember.

Klopp: Close but not close enough

Liverpool boss Jurgen Klopp: “The boys have played an incredible season. The whole journey. Its absolutely exceptional. The game today said so much about these boys. We conceded an early goal which gave us a knock. We did not play football like we usually play. We had to take Thiago off early. And then you still find a way, it’s outstanding. Ninety-two points is crazy.

“It was clear before the game a lot of things had to happen [for Liverpool to win the title]. Congratulations to Man City, Pep Guardiola, their players. We were close but in the end not close enough.

“Thiago is not good but I can not say more. He was out with his family with his little girl on his shoulders so he could walk which was a good sign. We want to wait until we know more about it.

“I was not really aware of [the City score changes]. In my mind it was 1-0. I do not know all the story. There was one moment when it was 3-2 then I do not know why we thought they’d equalized again. That was a good moment! But then everyone went, ‘ah nothing happened’.

“The season was so close, so tight. Moments, decisions, these kind of things. What I’ve learnt about life is if you stay on track and keep going you get your rewards. Not today, but we will get it.

“This season is incredible and will end next week. It’s tough. The early goal did not help. We have five days to prepare for the Champions League final. We face an incredibly experienced team but that’s OK. Losing the league today increased the desire to put it right next week. “

Henderson: We’ve given everything but this season isn’t over yet

Liverpool captain Jordan Henderson: “It was a tough afternoon. We did not play particularly well or as well as we could. We went a goal behind and it was never easy, there were a few nerves today. We came through really well, scored some good goals and found a way to win.I did not know what the score was [at Man City] and there were too many cheers from our fans and the Wolves fans. I lost count! We tried to focus on what we needed to do and win the game.

“We have been in this position before. It is tough when you’re hearing cheers and Wolves are a good side and we knew they would make it difficult. We always believe that we can find a way and we certainly found a way to get three points. It wasn’t enough. The lads have given everything and you cant give too many issues. We’ve given everything all season right until the last day. Even in January you would have taken your hand off to take it until the last day.

“I’ve been proud of what they’ve done this season so far, but it’s not over yet. We’ve got disappointment today and we have to say congratulations to City of course. But then we need to focus on the job next week against a really good side and we’ll have to be at our very best to come away with the trophy. “

Lage: Defeat summed up our season

Wolves boss Bruno Lage: “I’m proud of them. It was a great opportunity to live a good moment. We did not have a target and it was one more test. We showed personality with the ball.

“When you look back all the little things that happen in the season happened today: players have to come [off], we start winning the game, we have chances to score more goals and in the end we lose it. We give the image we need to be more consistent.

“I need to be honest with my players and say we did a good season. We faced a lot of problems but we put Wolves in the fight for a different position in February and March. In the last games we did not have what we needed to replace some of the players we played the last six games without. “