Lionel Messi has history at Wembley. It was there that Barcelona beat Manchester United to win the Champions League in 2011. “No one has given us a hiding like that,” said Sir Alex Ferguson. Rio Ferdinand turned to his team-mates as the trophy was lifted. “I’m ashamed,” he said.

Messi was man of the match that night and he was man of the match when he returned to the stadium to star against Tottenham in 2018. He scored two in a 4-2 win, hit the post twice and left many in the ground agog. “Messi eats at a separate table,” said Barca team-mate Jordi Alba.

It was a comment that was in part a response to Messi’s exclusion from the top three in the FIFA awards that had taken place in London just days before. “With all due respect,” said Ivan Rakitic after this astonishing performance, “there is a guy who is better than the rest.”

Messi returns to Wembley on Wednesday evening to captain Argentina against Italy in the Finalissima, a match between the champions of South America and Europe. He does so with his status as the world’s best player having slipped, his reputation being reconfigured.

He is no longer in the Ballon d’Or reckoning, anointing Karim Benzema as a worthy winner of that award. Instead, there has been criticism of him at Paris Saint-Germain. Having scored just six league goals, it is difficult to argue that Messi is the best player in his team let alone the world.

Which leaves the rest of us in a curious position as perhaps the greatest who has ever played this game finds himself back among the pack. Still elite, of course, but not a cut above. The best ever but not the best now. It is no surprise that sporting icons prefer to retire at the top.

Usain Bolt retired immediately when he was outsprinted for the first time at a major championship in a decade. Boxing greats are urged to quit at once when they begin to wane. Those who are savvy enough to do so are praised for protecting their reputation as well as their health.

But away from the world of pugilism, there is much to enjoy when a legend plays on. The sight of Tiger Woods competing again or the chance to watch that Roger Federer forehand one more time should not be missed. Supporters at Wembley will be hoping to see another Messi moment.

How good is Messi now?

Look beyond the lack of goals and, even in decline, the evidence is there to show that Messi remains an extraordinary footballer. Pep Guardiola recently bemoaned the limitations of statistics in assessing players’ contributions. Summing Messi up with goals has never felt satisfactory.

There have been near misses this past season. He has hit the frame of the goal from free-kicks more than anyone else in France. But it is inescapable that there has been an alarming drop off for a player who averaged 35 league goals per season during his last 12 years at Barcelona.

Just weeks from now, Messi will turn 35 and there should be nothing controversial about the suggestion that his level has dropped. The eye test reveals that much. The old turn of pace has gone. He still has the skill to elude men more than a decade younger but can not run away from them.

The expectations when he arrived in Paris were so high that many there have been left underwhelmed. The player ratings of the French newspaper The team are notoriously harsh but they highlight the baggage that Messi brought with him. People demand the best.

He was described as having looked lost in a game against Rennes and given a rating of only four out of 10. This was a game in which he created the most chances for his team-mates and completed the most dribbles of any player on the pitch . It was nowhere near enough for his critics.

He had his moments against Nice but The team gave him a mark of just three out of 10. He was PSG’s most incisive player against Nantes but was awarded a four. Against Monaco, when his solo run set up Kylian Mbappe to score? According to The team, he looked lost again. Four.

So vivid is the memory of those marvelous years at Barcelona that it is difficult to judge Messi by any standard other than his own – and nobody has matched that before or since. With a shift in thinking, perhaps there will be a realization that the old maestro can still play a bit.

Messi’s former manager might not approve of the increased use of statistics but they can be useful in taking the emotion out of the analysis. Strip away the preconceptions, the narrative of a disillusioned footballer, a player in sharp decline, and a different picture emerges.

The popular website WhoScored calculates its player ratings based only on the event data – passes, shots, chances created, tackles and much more. That dispassionate view of Messi’s performance levels suggests that he remains one of the best players around.

His average ratings this season rank him as the second-best player in France and the third best in any of Europe’s major leagues this past season – behind only Mbappe and Robert Lewandowski. 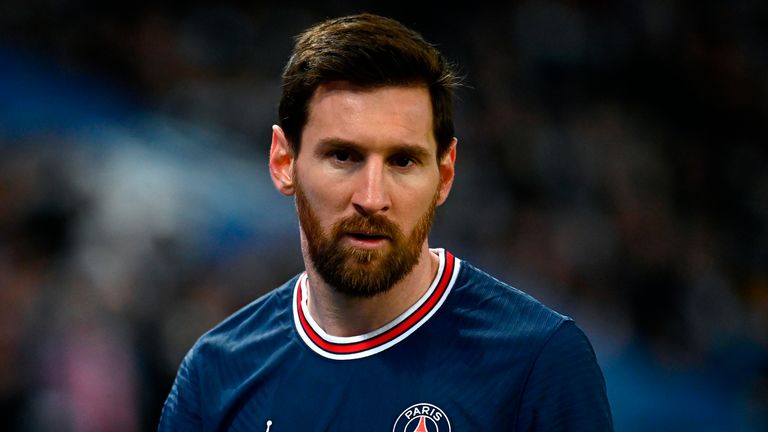 It has often been said that Messi is an alien. Well, how would his performances be viewed if a player producing these performances had emerged from nowhere this season? Would it be different if he were judged on what is happening now rather than what came before?

It is likely that he would still be seen as the game’s most creative player.

In the win over Saint-Etienne in February, Messi threaded a clever pass between four opposition players to find Mbappe for the equalizer and then jinked into the penalty box between three men to set up the same player for what turned out to be the winning goal for PSG.

One week before at Nantes, his pass to Neymar cut out eight opposition players to allow the Brazilian to score. Perhaps you might have preferred the gorgeously dinked pass behind the defense to set up Angel Di Maria for the winner at Saint-Etienne in November.

That was one of a hat-trick of assists in that game. There were 14 of them in total, the third most in Europe’s top leagues. He completed more through-balls than anyone else. Those through-balls such as the one that found Mbappe really underline the difference between Messi and the rest.

This metric has long been an indication of his vision. Since 2010, there have been 199 of them in the Champions League. He is likely to reach his double century of through balls before any other player brings up three figures in that time period. It is outrageous, a Don Bradman-like contrast.

That points to his historic brilliance with the ball at his feet in the opposition half and with runners ahead of him. But Messi also made more through balls than anyone else in the Champions League this season too. The pace has dropped but the creativity remains.

Mbappe’s performances while wearing the same shirt make it impossible to argue that Messi is a level above the rest these days. But look past the scoring statistics, try to examine his performances with fresh eyes, and it is soon easy to see that this is still an astonishing player.

With that in mind, maybe there will be a reassessment soon.

There is, after all, a precedent and a pattern with this.

Dominance causes division and then derision from those who like to think they have spotted weakness before the rest. Messi’s debatable Ballon d’Or win last year did him few favors – encouraging the view that this special player was receiving special treatment.

But there is always the next phase. Stephen Hendry, known as the King of the Crucible, found more love from snooker crowds when he was no longer on top. Michael Schumacher had Formula One fans willing him on like never before when he made his surprise return to the sport.

We are into the final act now. Sport, unlike theater, rarely saves the best for last. But there will be a touch or a turn, perhaps even goals and glory. There is the tantalizing prospect of something to get the crowd off their feet and send someone home happy. And that is not nothing.

It will be impossible for Messi to do anything on Wednesday night that will match his most magnificent achievements at Wembley. But there will be youngsters in that crowd who have never seen him play before and many more fearing that they will never see him live again.

It is time to cherish every Messi moment we have left.