SKOPJE DOES what Skopje wants…and they might have got away with it but for those pesky Hoops.

It was Gary O’Neill who struck in the injury time Skopje’s own time-wasting created, his long-range goal sealing a two-goal win that puts Rovers so close to group stage football they can almost taste it.

This victory against the champions of North Macedonia in the first leg of their third round qualifier in the Europa League puts them in a fabulous spot: progress in Tuesday’s return game will mean a playoff for the Europa League and a guaranteed spot in the Conference League group .

Rovers led 2-0 at half-time but saw their dominance ebb away in the second half, conceding once before a late red card returned their momentum. Skopje sat in in the hope of escaping Tallaght with a one-goal deficit, their goalkeeper throwing himself to the floor on spurious grounds in a prodigious show of time-wasting. But they were ultimately undone by O’Neill, who curled home a gorgeous shot from range with the game’s very final kick.

It sparked a jubilant outpouring around Tallaght, among fans who might have been left with a much more ambivalent feeling had Rovers only won by a goal. Skopje meanwhile, head home with their dejection worsened by grievance.

Dublin airport’s ongoing staffing issues meant they had in and out of Shannon Airport, which the Skopje president laid at the feet of the Irish government in a pre-game statement as blistering as it was bizarre. This, he said, was an ‘evil’ inflicted upon his club, and a “cheap game that has no place in football.” He also promised retribution: those extra couple of hours on a bus up from Limerick would mean his players would appear “like lions on the field.”

Skopje’s traveling party quietly disavowed their president’s dyspeptic statement, but started with the aggression he had promised. Unfortunately for them, they channeled it in all the wrong ways, following foul with foul and allowing Rovers to open the scoring from the penalty spot.

Andy Lyons was hacked down from behind by midfielder Diene Albert Lamene, and Graham Burke blasted the spot kick beyond goalkeeper Kristijan Naumovaki.

Burke reprized his roving role from the Ludogorets game, and twice flashed shots across the goal that might have been diverted in. Rory Gaffney couldn’t control the first – the ball looped tamely into the goalkeeper’s arms – and Ronan Finn was inches from connecting with the second. That Burke effort was virtually the only pass that Gaffney didn’t control in the first-half, his velcro touch allowing Rovers an easy way around Skopje’s high press.

Skopje did try and press Rovers high, but Rovers had some joy playing around it and even more playing over it. When Shkupi pressed Alan Mannus’ goal kick just after the midpoint of the first half, the goalkeeper simply punted the ball up to Burke, whose adroit, flicked header found Gaffney, who then pushed the ball in-field to Dylan Watts. Watts’ touch was immaculate: it killed the ball and gave him the chance to steady himself before slotting beyond Naumovski.

Shkupi’s polished grievance continued to show itself in all the wrong ways, as Walid Hamidi was lucky to escape with only a yellow card for a flying lunge on Gary O’Neill. The Rovers midfielder was himself booked for a mistimed challenge in his own half as the first half ticked to a close, with Mannus forced to claw away Freddy Alvarez’ free-kick. Long-range efforts were the sum of Shkupi’s threats in the opening half, as Mannus had to be alert to bat away an earlier drive by right-back Angelce Timovski.

Skopje were much better after the break, with Mannus sharp again to tip Adetunji’s stooping header over the crossbar. Their threat from range remained, with Mannus’ throwing himself high and left to save Queven’s stinging drive.

By that stage Rovers slick first-half play had lost its rhythm, exacerbated by the loss of the outstanding Chris McCann to injury. He was replaced by Richie Towell, whose first act was to brilliantly pick out Watts unmarked in the box. This time, goalkeeper Naumovski pushed away Watts’ shot.

Rovers’ control of midfield was loosening in McCann’s final minutes on the pitch but it disappeared completely without him.

Skopje emptied their bench with a triple sub and further wrestled the game’s flow. The Fellaini-haired midfielder Adem Ali was a terrific addition to the midfield, but should have scored in the box when some penalty-box pinball broke his way, only to be denied by a splayed Mannus.

Get closer to the stories that matter with exclusive analysis, insight and debate in The42 Membership 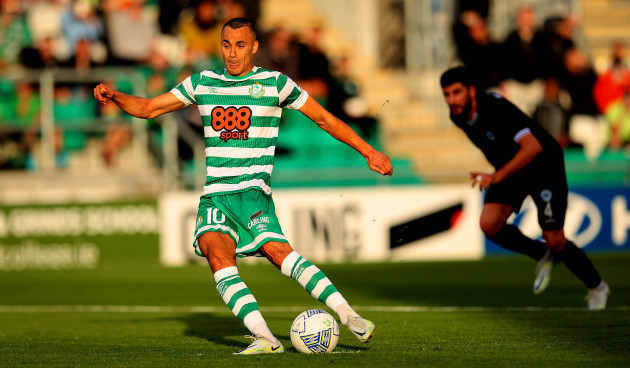 Skopje’s accumulating pressure finally brought reward. It was, perhaps unsurprisingly, a shot from distance: Queven’s shot whipping viciously through the air and into the middle of the goal, past a bewildered Mannus.

Rovers dropped deeper and deeper, and Towell was forced to block Ali’s near-post shot from close range. But Shkupi’s growing confidence was undercut by their sharp edge. Hamidi, having been lucky to avoid red for his earlier lunge on O’Neill, flew into another tackle on the Rovers midfielder and picked up his second yellow. He left the field ashen-faced.

Skopje almost escaped with their one-goal loss until Sean Hoare strode forward, shimmied his way beyond a couple of players and unleashed a shot that the allegedly injured Naumovski acrobatically tipped over. Rovers’ corner came to nothing but the ball was recycled to O’Neill, who took a moment and brilliantly picked his spot.