Javier Tebas has once again lashed out at Paris Saint-Germain after Kylian Mbappe snubbed Real Madrid to sign a lucrative new contract with the French champions.

The Spanish league president compared himself to ‘Robin Hood’ and asked questions of PSG’s financial figures as he prepares to file a complaint to UEFA over Mbappe’s contract renewal.

Tebas accused PSG of ‘destroying the ecosystem of European football’ in his latest broadside after the French striker agreed a jaw-dropping £ 650,000-a-week, three-year deal to stay in Paris. 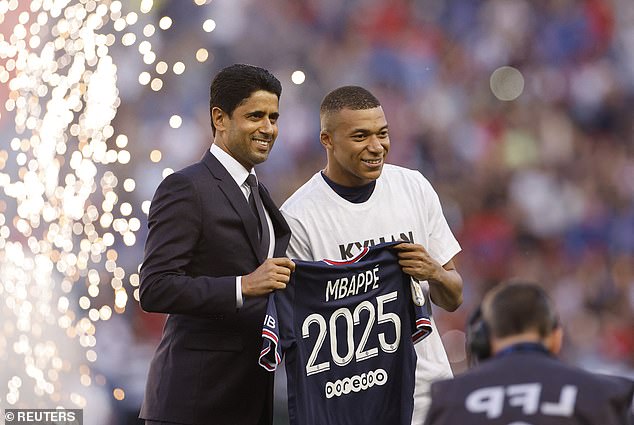 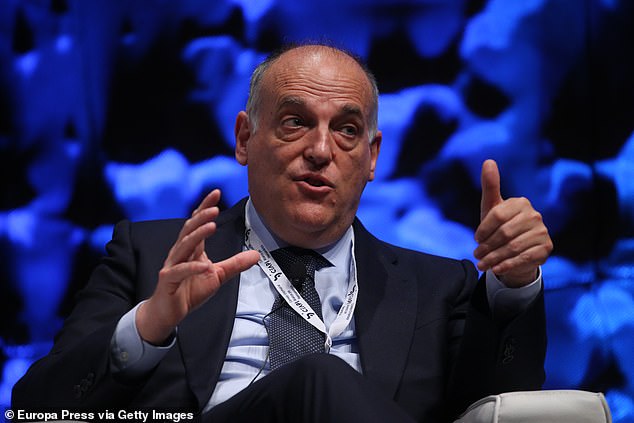 ‘We are not going to allow a European team to destroy the ecosystem of European football,’ Tebas said on Tuesday.

‘It’s not a problem of French football but of European football. We want the Ligue 1 to be a sustainable competition. It’s not good for the industry.

‘Our claim regarding the PSG case has already been drafted and we will be filing it to UEFA in the coming days.

‘I believe this is what we have to do to defend European football and Spanish football and we are going to do it.’

Tebas went on to accuse PSG’s owners, Qatar Sports Investments, of breaking finance rules and called on UEFA to sanction them. 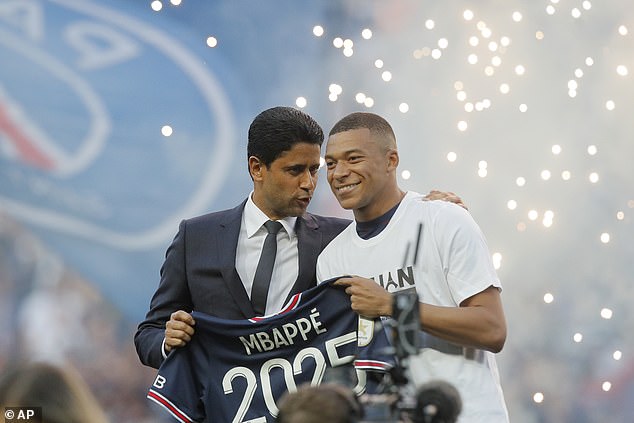 ‘That’s impossible unless there is deception in terms of sponsorship or capital contributions which is greater than those allowed by UEFA.

‘We seem like the European Robin Hoods. I have spoken with other leagues, and some could join us [in the claim made to UEFA].

‘We are going to do it no matter what the president of the French league says. They already know me in Europe. ‘

LaLiga chief Tebas insisted he had no problem with clubs being owned by the sovereign wealth funds as long as they remain within the margins of Financial Fair Play.

He said: ‘We do not care if the owners are states. I have no problem with Qatar Investments owning PSG.

‘The problem is the attitude it has as a club owner. They do not care about losses, they put [in] the money that they want, they deceive you with sponsorship deals that are linked to the state.

‘This is the problem. They use the state figure to contribute money regardless of the losses they have. ‘ 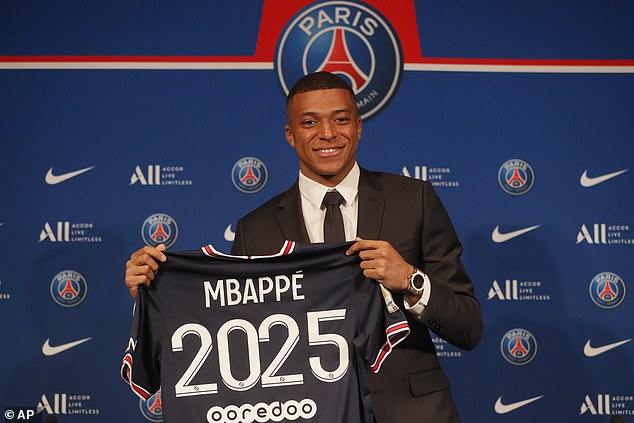 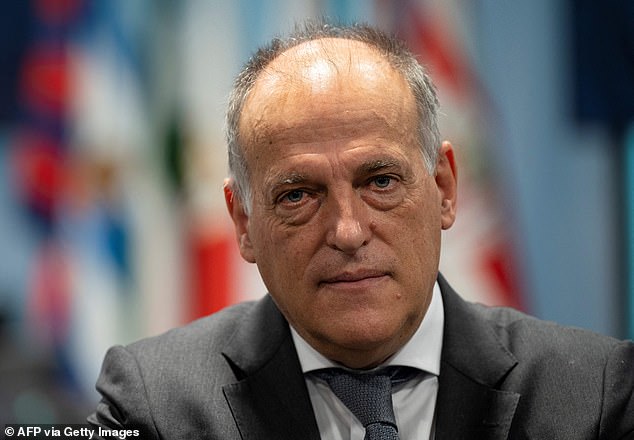 As for his relationship with PSG president Nasser Al-Khelaifi, Tebas said: ‘I’m not going to sit down at a UEFA Executive Committee meeting next to Nasser and say: “Hey Nasser, let’s have an appetizer after the meal.”

‘I’ve already told him several times: “Listen Nasser, stop cheating because what you are doing is screwing football.” Because he does not listen, we must insist. ‘

The latest remarks by Tebas are the latest escalation in the ongoing war of words between the Spanish and French leagues after Mbappe decided not to sign for European champions Real and renew at PSG.

Labrune said: ‘First, in relation to financial stability and sustainability, two of your clubs – Real Madrid and Barcelona – have broken a multitude of records in the past decade. 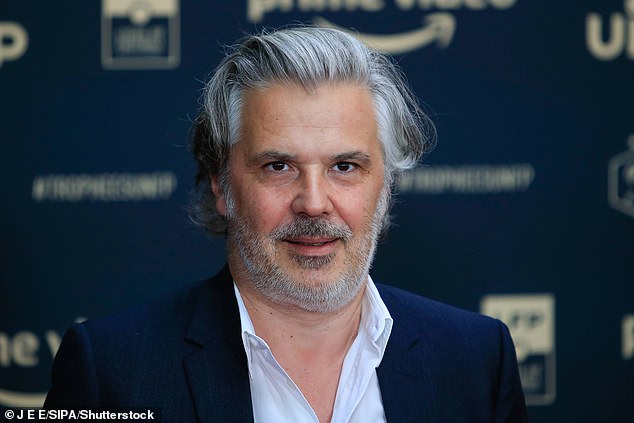 Vincent Labrune, the president of the French league, blasted back at Tebas last week

‘In terms of transfer fees, these two clubs have broken the world record six times. In terms of player salaries, Real Madrid currently has two of the highest-paid players in world football sat on their bench [Gareth Bale and Eden Hazard].

‘In terms of debt, Barcelona is reported to have a debt level of € 1.5billion, and this is despite the European Court of Justice finding that Real Madrid and Barcelona benefitted from illegal state aid.

‘Over the past 10 years, LaLiga spent 32 per cent more on players than Ligue 1; and significantly more on foreign players outside your own league compared to Ligue 1. ‘

Labrune’s letter to Tebas went on: ‘Finally, one final comment would be a simple request to treat players in our league and across European football with some respect.

‘When Lionel Messi, Sergio Ramos and others left your league – by choice – last year, rather than acknowledging their greatness (which you had weeks prior to their departure) you commented on their age and brandished our league as being’ like the league of legends given the age of some players. ‘ 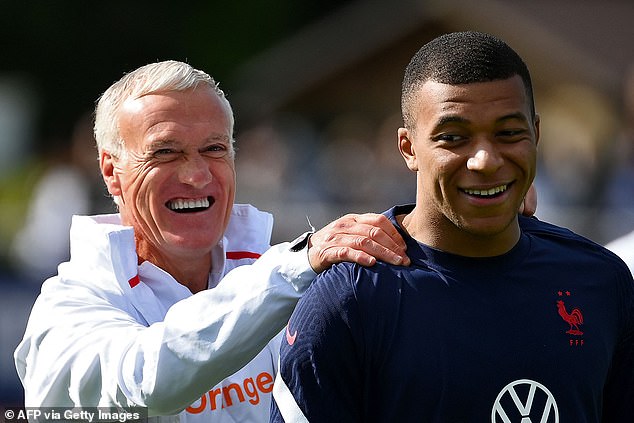 ‘Now your disrespectful smears seem to be directed towards Kylian Mbappe who is widely acknowledged to be one of the world’s greatest players and who simply did not join your league, by choice, despite having received a similar offer.

‘Unlike you, Ligue 1 lauds and promotes players both in our league and across Europe – including those in your league.

‘Someone in your various positions might be wise to consider the same.’

Labrune’s remarks came in reply to Tebas’s initial comments following the Mbappe news, in which he described PSG’s actions as ‘an insult to football’ and said ‘Al-Khelaifi is as dangerous as the Super League.’