Fernandez is out injured and hasn’t featured in pre-season, plus when he does get fit, every chance that he could be moving out as he looks clear fifth choice and needs to move if he wants regular football.

Eddie Howe has stated that Jamaal Lascelles will continue to captain the team…’when he plays’.

A clear consensus among Newcastle United supporters, from what I can see anyway, that Lascelles is now fourth choice.

Which then leaves Fabian Schar, Sven Botman and Dan Burn.

When Brighton agreed to sell Dan Burn and he arrived on January deadline day, Newcastle fans were happy to see the Blyth lad return home, but could never imagine the impact he would have. The same with Matt Targett.

Eddie Howe pairing Burn with Fabian Schar and the pair appear to perfectly complement each other. A shocking first half of the season had seen 42 goals conceded in only 19 games, including 19 in eight before Steve Bruce was belatedly sacked. A couple of bad days at the office saw five conceded at both Man City and Spurs but in the other 17 Premier League games in the second half of the season, only another 10 goals.

The £35m arrival of Sven Botman though, has created a three into two won’t go.

I think it’s fair to say that the expectation is that the 22-year-old Dutch defender will definitely become the first choice central defender for Eddie Howe. However, as was shown with Bruno Guimaraes (first start for NUFC was mid-March), Eddie Howe prepared to wait before starting a big money signing from an overseas league, especially if he has good alternatives already doing a very good job…

Friday night, Eddie Howe played his first choice back four from last season, with Nick Pope behind them they kept a clean sheet and did very well. Especially as Howe wanted all his first team squad players to get 90 minutes this past weekend, so the final stages of the game saw Atalanta with plenty of fresh legs, meaning a tiring NUFC side came under ever increasing pressure. However, they saw the game out and Pope along with the back four did very well.

That was it then for me, this is who will start against Forest next weekend, including Schar and Burn at the heart of the defense.

Then Saturday came along, Athletic Bilbao another tough opposition, this time Eddie Howe going with his key midfield and attacking players – ASM, Wilson, Bruno and Joelinton. While Dubravka was playing behind a basically squad defense of Krafth, Lascelles and Dummett, with Sven Botman the possible / probable exception.

After taking a 2-0 lead, Newcastle did concede, although to be fair Athletic Bilbao looked better going forward than Atalanta had, whilst Dummett increasingly struggled and was eventually subbed, as the visitors regularly got in behind on their right side.

Krafth did ok, while Lascelles was another who struggled, along with Murphy and Ritchie playing further forward.

However…looking an absolute star was Sven Botman. Yes, I know only a friendly, but the new signing appears to be a class act. He has already played Champions League football and helped Lille get to the knockout stages of the competition, whilst aged 20, he arrived at the Ligue 1 club in 2020 and was key to their amazing season where they broke the PSG stranglehold in the league, Botman picking up a Ligue 1 winners medal.

On Saturday, Sven Botman looked so composed, glided around the backline effortlessly, snuffing out trouble, blocking crosses, putting in tackles, but what really stood out ahead of those essential defensive traits, was his ability on the ball.

While Bruno is in a class of his own when it comes to calmness under pressure from the opposition, I think our new £35m defender could well be a clear second. Never panicked when in possession, always ready to take a pass, whilst the moment of the match for me, came not with the two goals – which were excellent, instead it was the team move of the match AND it included the pass of the match , Sven Botman to Joelinton which breaks the lines and takes Athletic Bilbao apart. Look out for the video highlights showing the full move, which included numerous passes and ended with the keeper saving from Bruno, but just look here at the key Botman pass in that move which really opened up the opposition.

This is exactly why Botman will be a brilliant signing for us this season Expect to see so much more of this 🇳🇱🔥 #NUFC https://t.co/GPG3Mgq7Ay 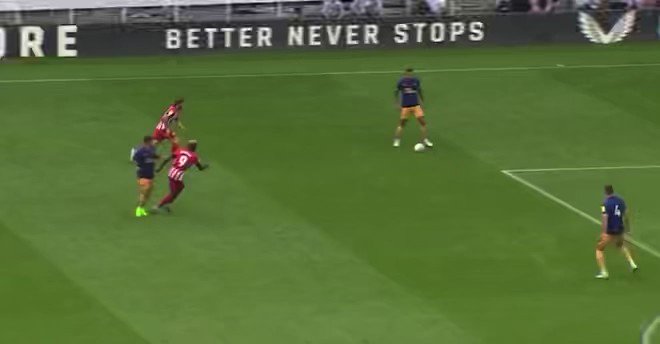 Anyway, I have no doubt that when it comes to Nottingham Forest, it’s…Sven Botman, with then a choice of Burn or Schar to play along

(‘After these Newcastle United friendlies, I’d better go and talk to the wife…’ Read HERE)