It was almost midnight on Sunday when Real Madrid coach Carlo Ancelotti took the microphone on the podium in the center circle of the Estadio Santiago Bernabeu.

Ancelotti had vowed to sing if Madrid won Saturday night’s Champions League final against Liverpool in Paris and, almost 24 hours later, he launched into an impressively lusty rendition of the club’s Hala Madrid anthem.

“History that you made, history still to make,” sang the whole stadium, as 60,000 happy voices joined their coach and his players. “Because no one can resist your desire to win. ”

It’s a song and a sentiment that neutrals can find hard to stomach, especially beaten rivals, but there has been something historic about this Real Madrid season. Twelve months ago Ancelotti was the Everton manager, and even when he accepted the unexpected call to return to the Spanish capital there was little expectation of what was to come. 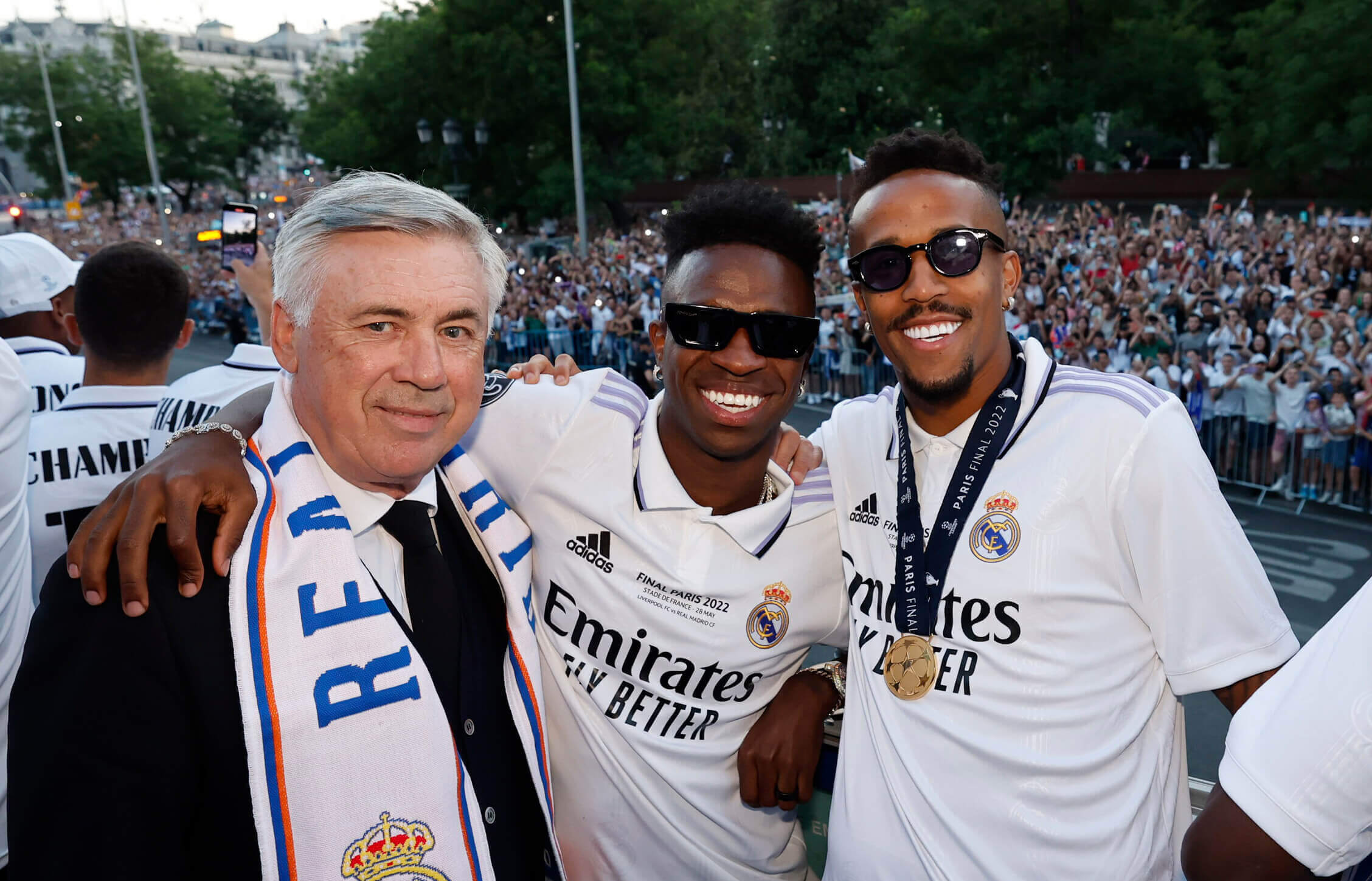 But the Italian guided Madrid to a title in La Liga that was not as straightforward as the final table suggested, and their Champions League momentum and energy built through comebacks against Paris Saint-Germain, Chelsea and Manchester City.

Saturday’s victory over Liverpool might not have been a classic, and the awful events outside the stadium marred the occasion, but Madrid celebrated this 14th European Cup victory with as much, if not more, satisfaction than many in the past.

There had been a lot of confidence in the Madrid camp in the build-up to the final. “Finals are not playing, they are for winning,” was a phrase repeated by many past and present players last week, including midfielder Casemiro when speaking with The Athletic.

With Ancelotti and his senior players so used to these types of occasion, Madrid’s team hotel in Chantilly had been remarkably calm pre-game. “I saw Karim (Benzema), (Dani) Carvajal and (Luka) Modric playing cards just a few hours before the game and thought, ‘Wow, that’s being chilled’,” first-time finalist Dani Ceballos said in disbelief afterwards.

There were still some nerves before the game, and especially after kick-off was delayed due to the awful scenes outside the Stade de France. “I went to the toilet today more times than ever before in my life,” Fede Valverde told Spanish TV, with his young son on his shoulders, soon after the final whistle.

That was after Vinicius Junior’s only goal, and Thibaut Courtois’ nine saves, had beaten Liverpool. Man-of-the-match Courtois used the post-game celebrations to answer his critics, especially in England. On Spanish TV he offered an apology. “I’m sorry for my brother – he’s getting married tomorrow, and obviously I can not be there,” the Belgian said. 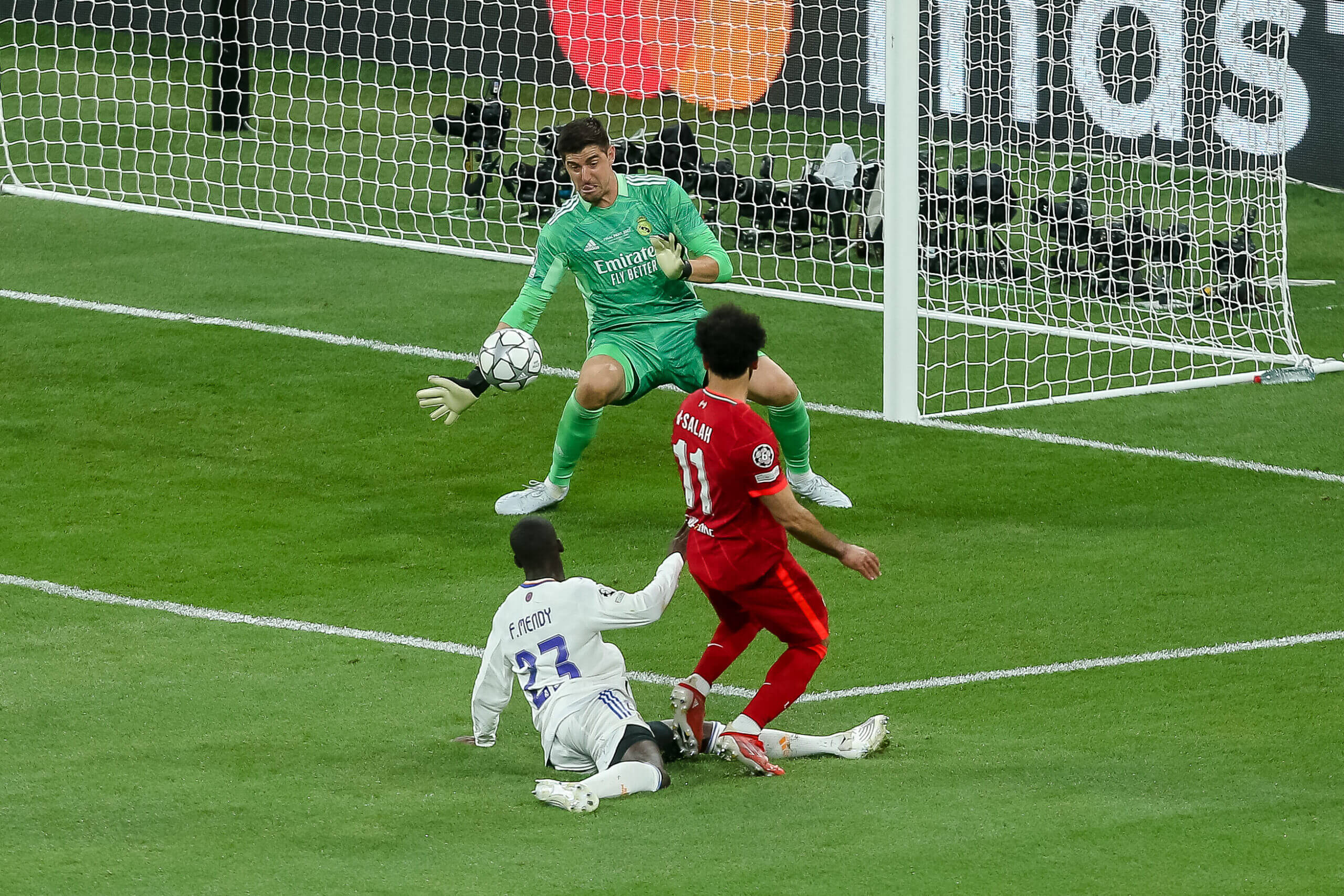 Ancelotti was reminding everybody that few had predicted Madrid would end the season with a Champions League and La Liga double. “This is the most special Champions League of my four,” the Italian told the post-match news conference two hours after the final whistle at the Stade de France. “Nobody expected us to win this trophy – not even us.”

Modric said he and his senior team-mates were well aware that many pundits in Spain and elsewhere thought their Champions League winning days were long behind them.

“Many people thought we were finished, not just us three (Modric, Toni Kroos and Casemiro),” the 36-year-old told Spanish radio station Cadena Ser. “All the talk was of changes, new signings. But with this humility and character, by being strong all together, we’ve shown we can win things together. The only thing that counts at this club is winning, and we want more. ” 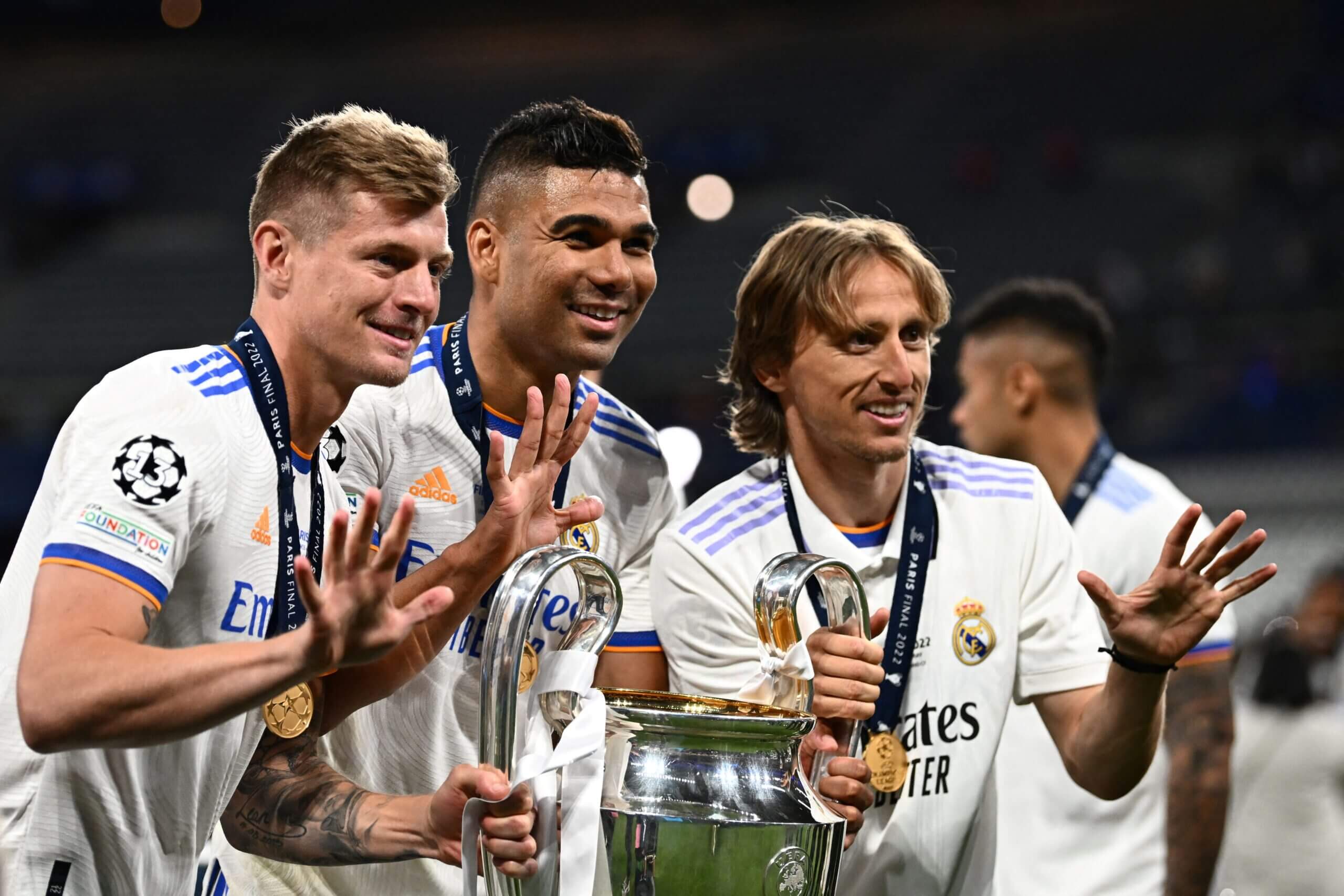 That talk of changes was a reminder of the huge embarrassment for Madrid president Florentino Perez last week when Kylian Mbappe dramatically and publicly turned down their offer to stay at Paris Saint-Germain. Perez claimed he had already moved on. “The whole Mbappe thing is over now,” he said on the radio, not convincing everyone.

It was after 2am on Sunday when the team headed back to their nice hotel in Chantilly, and there were some tired faces when the players landed in the Spanish capital at around 5pm local time. There were still lots more celebrating to do, with Madrid and the local authorities having carefully planned the itinerary for the evening.

After the “Septima” (seventh) European Cup back in 1998, more than a million Blancos fans lined the route from the airport to the city-center Cibeles Fountain as players, including match-winner Predrag Mijatovic, made the journey in a caravan of open-top convertible cars.

The first stop in the “Decimocuarto” (fourteenth) celebration tour was Madrid’s Catedral de la Almudena. Archbishop Carlos Osoro Sierra welcomed the team on the steps outside, as the cathedral bells rang, and Eden Hazard appeared to give his Excellency Reverendísima a wink as they shook hands. Benzema and Marcelo carried the trophy inside and placed it carefully on a podium by the altar.

Nacho and Modric followed with this year’s La Liga trophy, and placed it on the ground alongside. “It was a triumph based on the values ​​forged by this club over its history – effort, sacrifice, hard work, respect and solidarity,” said Perez from the lectern.

From there the team had to visit both the regional president Isabel Diaz Ayuso, a Real Madrid fan, and city mayor Jose Luis Martínez-Almeida, a well known Atletico Madrid supporter. The town hall building is right by the Cibeles Fountain, an 18th century sculpture of the Greek Earth Mother goddess in a chariot being pulled by two roaring lions, where Real now always celebrate their successes.

The players danced their way up the steps onto a raised platform, with Brazilians Marcelo, Vinicius and Eder Militao leading the way. Ancelotti called on different players to take the mic and lead the fans in chants. Vinicius went with: “This is how Madrid win.” Rodrygo belted out: “How could I not love, being European Champion a 14th time.” Casemiro sang “Karim, Ballon de Oro.” A happy-looking Hazard also took the mic to say that, “It’s been three years of injuries and lots of things, but next year I will give everything for you.” Gareth Bale was there too, but kept to the edges, having only played seven minutes in the competition all season. Ancelotti used 25 players in total – the only senior players not to feature were sub keeper Andriy Lunin and the now out-of-contract playmaker Isco.

Marcelo then continued the tradition of the team captains wrapping a club scarf around the goddess’ shoulders and shook the trophy into the air. White ticker-tape fluttered over an estimated 200,000 supporters gathered in the streets stretching in each direction. 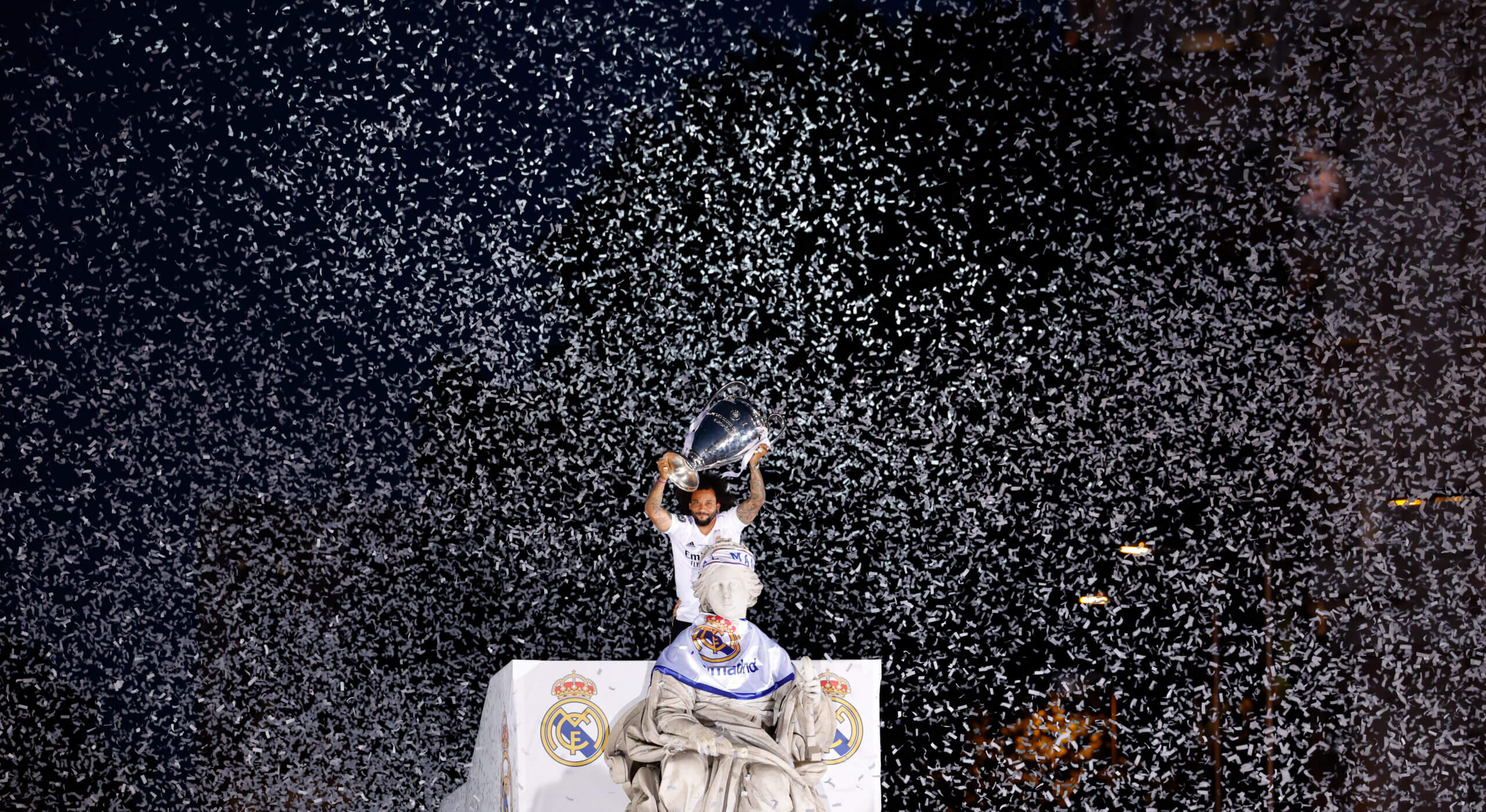 The 34-year-old is leaving this summer after winning 25 trophies with Madrid – more than anyone, ever. He was wearing five big chunky gold rings – one for each of his career Champions Leagues.

From there it was five kilometers on the open-top bus up the leafy Paseo de la Castellana boulevard to the Bernabeu, which was heaving with more fans than attending the stadium for some humdrum La Liga games back in the autumn, when not everybody was so sure about Ancelotti and his team. As the supporters waited, they cheered at the big screens showing Madrid’s goals during the PSG, Chelsea and City comebacks. It was a reminder of just how special – and surreal – this Champions League season has been.

Spanish TV personality Miki Nadal led the fans in renditions of different club hymns before welcoming the Madrid coaches and squad one by one onto the platform in the center of the Bernabeu pitch to the riffs of the White Stripes.

The mood was so jubilant that even Bale was warmly welcomed. He reacted by offering applause back to the fans in what was his last act as a Madrid player.

The biggest cheers were for young final heroes Vinicius and Valverde, and the better-than-ever old-stagers Modric and Benzema, with the crowd also claiming this year Ballon d’Or for the Frenchman. That the most biggest profile players are no longer bombastic characters like Sergio Ramos and Cristiano Ronaldo perhaps made the party a bit low-key, but also provides a hint to the collective ethic and team spirit that Ancelotti has harnessed across the season. 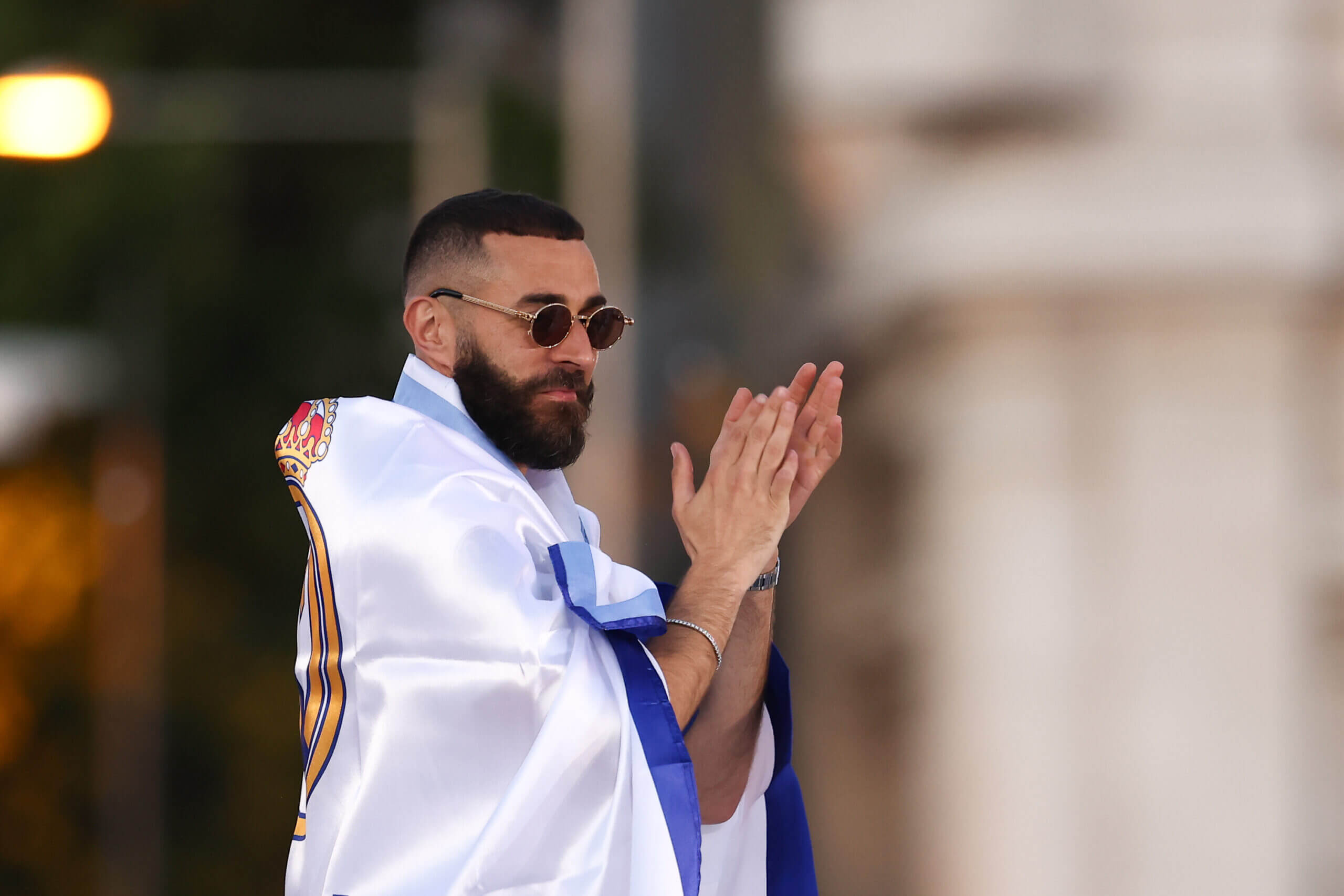 After spectacular fireworks whizzing high into the sky over the stadium, Ancelotti fulfilled his promise, showing an impressive command of the words of the Hala Madrid song that was written to celebrate the decisive “Decima” Champions League victory during his first spell in charge. There was no cigar as there had been during the celebrations for the league win last month, but the 62-year-old had again stolen the show.

And with that the party was over. The players could finally go home, their club season finally finished. Most head off tomorrow on international duty with their countries, while Courtois needed to catch up with his brother and new sister-in-law. Marcelo, Bale and Isco are not the only ones who might not return to the Bernabeu, and even if Mbappe is not coming, there are certain to be new faces before the 2022-23 season.

Ancelotti and his most important senior leaders are all sticking around. Few outside the Spanish capital will be backing them to retain the Champions League next season, either, but there is something special about Real Madrid. This is a club that knows how to win trophies – and how to celebrate them.