Manchester City are champions again but clearly this Liverpool team is not going away and will be back to try to take the Premier League title off them next season.

We need to give Liverpool credit for staying in the race until the very end this time, as much as City deserve admiration for holding them off. Both teams’ points totals were phenomenal and everyone is looking forward to seeing what they do next.

There is so little to choose between the two sides that their managers have to keep coming up with new ways of finding an edge.

I’ve watched City a lot this season and it felt to me like their manager Pep Guardiola was determined to improve them defensively, not that there was very much of a weakness there anyway.

He has been obsessed with reducing the threat of being hit on the counter-attack, so he tweaked things slightly.

They still pressed extremely high and defended from the front but kept better numbers behind the ball, while still finding ways of increasing their attacking threat too.

One goal conceded from 108 corners

City have become stronger physically, are harder to beat and simply more streetwise when it comes to dealing with different situations.

The way they handled set-pieces is a great example of that, at both ends of the pitch. 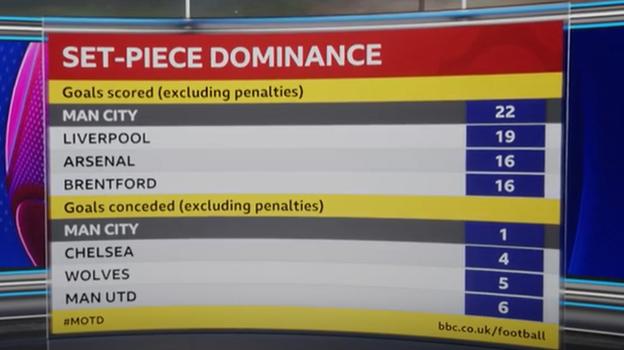 Overall, their set-piece record, offensively and defensively, in 2021-22 was the best of any of their six seasons under Guardiola with 22 goals scored and only one conceded.

It’s probably offensively where I’ve noticed the biggest difference. I’ve commented on City all season and I just think they always look more dangerous from corners and free-kicks. They seem to know it too.

Ruben Dias, John Stones and Aymeric Laporte are a threat and we’ve also seen Nathan Ake get in some good positions when the ball is swept into the opposition area.

Altogether, City have had more shots from set-pieces – corners, free-kicks or throw-ins – than any other Premier League team and their success rate from them is the joint-best too.

Obviously the deliveries have been on point but the important thing is that they carry miles more threat of scoring when they get on the end of them.

Again, their conversion rate of 4.7% from corners alone is the best of any season under Guardiola.

It’s extremely useful to have that kind of threat when sides are set up determined to stop you in open play. But it’s obviously important to get things right defensively as well, because a corner or free-kick might be the best chance the opposition get.

City did that too. That one goal that did go in was from a corner but they successfully defended the other 107 they conceded across 38 Premier League games.

But their overall ratio of goals conceded from the ones they do face is better than everyone else’s too. No-one managed to score against them in a move from a direct or indirect free-kick or throw-in, from 26 attempts at goal.

It’s hugely impressive, but maybe there is some hope for Liverpool and everyone else as the coach who has been responsible for City’s set-pieces this season, Carlos Vicens, is leaving to take charge of Dutch club Heracles Almelo this summer.

Haaland will only be judged on goals

City’s away form is another example of how resilient they have become – they lost only one league game on the road this season.

That came at Spurs on the opening weekend when they had not trained properly or had a pre-season and some of the players had only been back in for two days after taking time off following the European Championship.

To stay unbeaten on the road for 18 games after that was just incredible, considering this is a team who are best known for passing the ball around and having the highest possession rate in the Premier League. 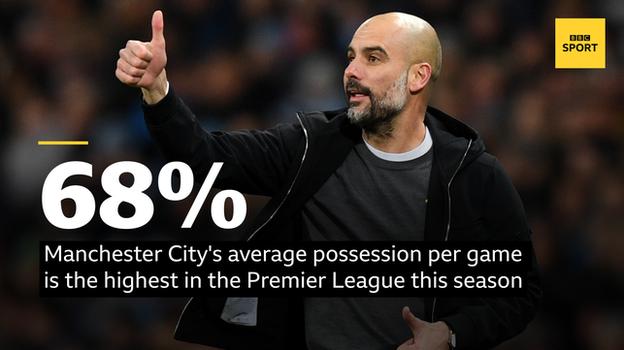 It just shows there is a steel to them that you need when you are defending the title – and are seen as the team everyone wants to beat wherever you go.

Similarly, it was not luck that they kept clean sheets in 21 of their 38 games home and away and, along with Liverpool, had the best defensive record with only 26 conceded.

That did not come at the cost of any attacking intent because the goals flew in too, especially from wider areas where Riyad Mahrez started the season with something of a bit-part role and ended up their leading scorer with 24 goals in all competitions.

It is exciting to think what Erling Haaland will bring to that side of things when he joins for next season. But unlike any City player this season, it is the number of goals he scores where his performances will be measured.

The expectation is so high that, unless he scores 25 goals straight away, there will be people asking why he went there and saying City’s style does not suit him.

Of course Haaland will have to play and score in order to be considered a success, but Pep will have a plan for him and it might take a little while for him to adapt.

Big call on Gundogan paid off

Speaking of plans, as Pep said after the final whistle on Sunday, there are some moments where everything goes out of the window. Their final game of the season against Aston Villa was one of them.

All the ‘big data’, as Guardiola calls it – the stats and numbers which he can dig into to see how City are playing – do not help you when emotion takes over, when you are losing a game you need to win to clinch the title and time is running out.

For Pep, it was time to make one final decision of the season with the last substitution he had left and he chose to bring on Ilkay Gundogan ahead of Jack Grealish. It was a big call.

I said at the time Gundogan was the right man to bring on because he has a knack of getting in the box at the right time when the team needs a goal, but plenty of people around me at Etihad Stadium disagreed.

Then, all of a sudden, from 2-0 down, we see five minutes of scenes like I’ve never seen before. Three City goals, with Gundogan getting two of them.

The first was down to another substitute, Raheem Sterling, who created a very un-City-like goal.

He squared up to Lucas Digne out on the right but instead of coming inside like City always do from there, went on the outside and put over a brilliant cross for Gundogan to head home.

Momentum, desire, character and the home crowd did the rest as City completed an amazing turnaround. But it shows what it takes to win the title when you have a team like Liverpool on your tail.

You can be the best team all season and play with composure and control for nine months, but sometimes you need to do something very different to get over the line.