Sunday was the 10 and final game of Wales’ World Cup 2022 qualification campaign, and over those 15 hours of football, there were so many little moments that made the difference between them reaching Qatar, or not.

And while it is impossible to overstate the importance of Gareth Bale’s stoppage-time winner away to Belarus or his free kick to open the scoring in the play-off semi-final with Austria, or Dan James scoring the only goal late on against Czech Republic , the whole campaign was teetering on the edge on Sunday evening when Oleksandr Zinchenko played in Viktor Tsygankov, who spun and rolled a perfect reverse pass in between Ethan Ampadu and Joe Rodon.

Andriy Yarmolenko, the hero of Ukraine’s semi-final win in Scotland four days earlier, was running onto the ball and was going to get there before goalkeeper Wayne Hennessey.

But Yarmolenko had not counted on Ben Davies, darting across from the left of Wales’ back three, making a perfect sliding tackle to keep the score at 1-0.

Who knows what would have happened if Yarmolenko had equalized at that moment, whether Ukraine would have capitalized on their momentum and ended up winning the game? But thanks to Davies’ tackle, Wales never had to find out.

Davies was probably Wales’ best player on Sunday in Cardiff, producing another one of those understated masterclasses in which he is in total command of everything he did. (Even when Wales took the lead late in the first half, the crowd were going wild and his team-mates were getting caught up in it, Davies came over to them and pointed both index fingers at his temples, the time-honored gesture telling people to concentrate. Given how the rest of the game went, you could say that it worked.)

Davies will never be the star of this team, not with Bale and Aaron Ramsey on the side, but across a 71-cap international career that began in his teens, the 29-year-old has often been the glue that has held it all together.

That tackle on Yarmolenko was reminiscent of another of Davies’ greatest moments in red.

For a generation of Welsh fans, a 2-1 win over Slovakia, in their opening game of the 2016 European Championship, was the day long-held dreams of seeing their country play in a major tournament became real, and the victory rested, in part, on another heroic block by Davies.

In just the third minute, Marek Hamsik had skipped past three of his team-mates and beaten Danny Ward, but Davies was there behind his keeper to clear almost off the line. Wales won that game in Bordeaux, won the group, and made it all the way to the semi-finals of their first ever Euros.

The fact that Davies is soon to play in his third major tournament for a country that had only reached one before those Euros six years ago – the 1958 World Cup – is a testament to what he and the rest of his generation have achieved. Davies, Ramsey, Hennessey, Bale and others will always now be immortals in Welsh football history.

But it is also a testament to Davies’ form at the end of a season in which he turned his Tottenham career around.

Ryan Sessegnon was back from a season on loan in Germany at Hoffenheim and there was enthusiasm for the then-21-year-old to be given a chance.

Sergio Reguilon, 24, had got a debut season in English football behind him and offered the pace and energy fans like to see.

And then there was Davies. He had been a loyal servant to the club since joining from boyhood club Swansea City seven years earlier but was not exactly a player who excited the crowd.

Just as he had spent the peak Mauricio Pochettino years largely playing second-fiddle to the more explosive Danny Rose, Davies was set for another season competing with more dynamic team-mates. There was even some consideration given to the idea of ​​selling him, most likely to another Premier League club, to raise some money.

When the season began, it was clear that Reguilon was Nuno’s first choice at left-back, and Davies was consigned to the bench. Davies’ first six starts for the former Wolves manager were all in either the Europa Conference League or the Carabao Cup, and his only Premier League start under Nuno was in what turned out to be his last game in charge, the 3-0 home loss to Manchester United on October 30.

Davies had been one of the players in Nuno’s infamous “B Team” that went to Vitesse Arnhem and lost 1-0 the previous midweek.

And while it was Harry Winks who was the public face of the players’ unhappiness with Nuno’s decision, saying that the notion of competition between players for places had been undermined, Davies also made his feelings known in private.

And that was the moment when the Tottenham hierarchy realized what a mistake Nuno had made – when even Davies, the ultimate team player and professional, would complain about a manager’s decision. Ten days after that game in the Netherlands, Nuno was sacked. 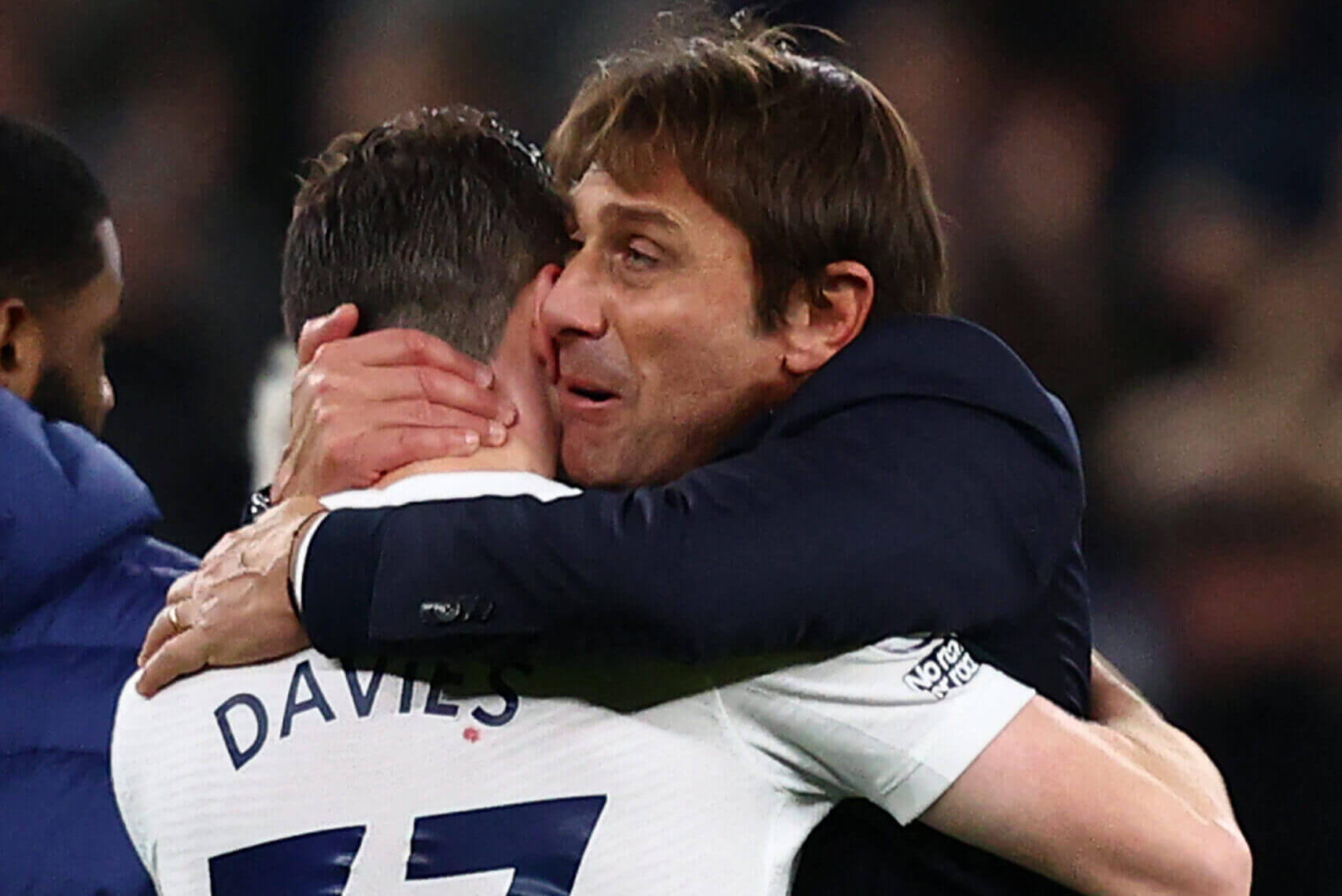 His replacement, Antonio Conte, transformed everything about Tottenham following his arrival in November, but no player has had his standing changed more than Davies.

As soon as Conte came in, he knew that he needed to tighten up Spurs’ defense. And he knew that a 3-4-3 system was his way to do it. Eric Dier as the middle center-back was an obvious choice, as was Cristian Romero as the right-sided one. But perhaps the most interesting selection was the return of Davies to the system, on the left of that central three.

Of course, Davies had plenty of experience in exactly this role.

He has played it for Wales for years, initially under Chris Coleman, and in that famous Euro 2016 campaign, when he made that block against Slovakia, that is where he came from to make it. And he had played a similar role for Tottenham when Jose Mourinho replaced Pochettino three years earlier, as the left-back in a four that became a three when right-back Serge Aurier pushed up.

For Conte, Davies was perfect. He was fit, he was reliable, he was consistent, he could defend well and play out from behind. When Reguilon or Sessegnon ran forward, Davies could cover in behind (or even go forward and join them in attack to create an overload). With the more cavalier Romero on the opposite side of the back three, Davies could tuck in and support Dier to stop Spurs from being counter-attacked.

Davies has started a remarkable 34 out of Conte’s 36 games in charge, and it is inconceivable they would have finished the season as well as they did without him in there. (Of the two games he missed, one was a Conference League game against NS Mura.) It was Spurs’ defense which got them over the line into fourth place and next season’s Champions League – they conceded just five goals in their last 11 Premier League games, and, of course, Davies played in every one of those 11.

“The training’s very detailed, it’s very clear what he expects,” Davies told The Athletic in December, not long after Conte had arrived. “Everything we do positionally is based on what’s been done on the training pitch. (Conte is) meticulous, a real worker on the details, and I like that. I want to learn from the best and having someone that can make the game as clear as possible for you, it’s a dream. “

Not that all this means that Davies’ permanent presence in the team for next season is guaranteed. Conte and Fabio Paratici are targeting a big, expensive upgrade at left center-back this summer, and are prepared to pay to get Alessandro Bastoni, 23, or 20-year-old Josko Gvardiol in through the door, from Inter Milan or RB Leipzig . If either of those two arrives, they will Haven to start, and suddenly Davies will have a lot more competition.

But even that does not mean it would be the end of him at Spurs.

Davies has had to face competition ever since he arrived at White Hart Lane just weeks after Pochettino did, from Rose, Reguilon, Sessegnon and more. And yet he has a canny habit of outlasting everyone. In his own modest, consistent, dependable way, he is a fierce competitor, and his teams – whether Spurs or Wales – are always better with him in them than not.

If the last few years have taught us anything, it is that nobody should ever write Davies off.