FORMER Arsenal striker Emmanuel Adebayor will undoubtedly go down as one of the Premier League’s most controversial players.

During his time with the Gunners he was regarded as one of the country top players after being named in the 2008 PFA Team of the Year.

His stunning form for the North London outfit saw him earn a move to Manchester City the following year.

And after a relatively productive 2009-10 campaign that saw him score 14 times in 26 top-flight matches, his career slowly started to go downhill.

That is despite him winning the Copa del Rey during his loan at Real Madrid in 2011 after falling out of favor under then-Citizens boss Roberto Mancini.

Still yet to officially retire at the age of 38, SunSport takes a look at five times the ex-Togo international has been involved in controversial moments. 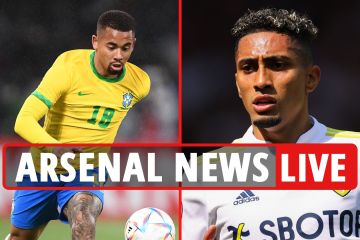 1. That celebration against Arsenal

In one of the most iconic moments in Premier League history, Adebayor was fined £ 25,000 by the FA for his wild celebration against the North London outfit in September 2009.

Playing in his first game against his former employers for City, the striker was subject to abuse from the traveling supporters throughout the Etihad encounter.

And after heading home in the second half during the 4-2 win, he ran the length of the pitch before knee-sliding in front of the away end.

Bottles and objects were hurled at Arsenal’s ex-talisman from the club’s supporters, with Adebayor simply holding his arms open in front of them.

2. Refusing to train at City

Just over a year at City, Adebayor found himself as surplus to requirements, with Mancini quickly shipping him off to the Bernabeu on loan.

Despite helping Los Blancos win a trophy after scoring eight goals in 22 matches, he remained out of Mancini’s plans, with the player left out of City’s US Tour in the summer of 2011.

Outraged, Adebayor failed to turn up to training after stating it was insulting for him to train with the club’s reserve and youth team players.

City launched an investigation to see if he was in breach of his contract, then offloaded Adebayor on loan to Tottenham.

Already an unpopular figure amongst Arsenal fans, Adebayor did the unthinkable when he joined Spurs on an initial loan, which was made permanent in 2012.

But Arsenal still managed to win both matches 5-2 in what turned out to be game of the season contenders.

Arsenal fans cheered for Adebayor one last time though – when in November 2012 he was sent off for a reckless challenge on Santi Cazorla.

Adebayor linked up with Paraguayan outfit Olimpia in early 2020 on a one-year deal after departing Turkish side Kayserispor.

But after just four games he had his contract terminated during the coronavirus crisis after he returned to his homeland, resulting in him being unable to travel back to the South American nation.

His last match for Olimpia saw him receive a red card for a flying karate kick when challenging Defensa y Justicia’s Enzo Coacci for the ball.

5. Refusal to donate to Togo’s battle against Covid-19

In April 2020, Adebayor publicly announced he was refusing to donate to his home country in their fight against coronavirus.

Speaking on a Facebook Live video, Adebayor said: “For those who say that I do not donate, let me be very clear, I really do not donate. This is very simple.

“I do what I want to do, eat the food I want and this is the most important thing.

“Then, there will be those who criticize me for not having established a charity in Togo.

“But it seems that I brought the coronavirus to Togo, it is very unfortunate, but this is the case and what happened in the country.”