ERLING HAALAND will arrive at the Etihad next month looking to become an important cog in Manchester City’s winning ‘machine’.

And the £ 51.4million Norwegian ‘superstar’ status had no bearing on boss Pep Guardiola’s decision to bring him to the Premier League.

He believes the 21-year-old’s decision to follow in the footsteps of his dad, Alfie, and join the Prem champs had nothing to do with money – despite his 5 375,000-a-week wages.

Instead, Haaland accepted the challenge of moving to a team who have got used to winning without a striker over the last two seasons.

Soriano said: “It was a long process. He could have gone anywhere – there were many clubs and all the rumors. 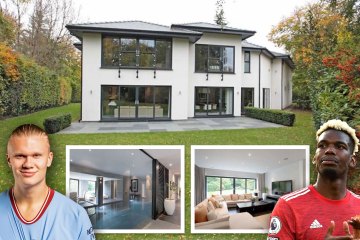 “The deal was transparent as he had a release clause but a lot of clubs wanted to sign him.

“He made the decision and he made it based on football criteria.

“It was a football decision because the financial decision was not a challenge.

“The fee was agreed by the release clause and a lot of clubs were willing to pay his salary demands.

“I’d say the key point was the technical discussion about football – and how he is going to fit into this machine that works.

“We’ve won four leagues out of five, we’ve scored so many goals, he had to feel that he could get into it.”

Soriano admitted Haaland will need time to adapt to Guardiola’s way of playing – but, equally, the team around him might have to evolve too.

The Spaniard added: “If you put a striker in a team, you have to take somebody out and you have to take them out of a team that has won four of the last five league titles, breaking records and scoring goals. You could say the system works and does not need a striker.

“If we play with a striker, we need a new system and we will have to adapt to that.

“I’m not going to say that he’ll break records – but the one thing I’d say is that fans will have to be patient.

“Anyone getting into our team needs time.”

The one nagging worry for cock-a-hoop City fans is Haaland’s injury record – with the 6ft 4in hitman sidelined for long periods at Borussia Dortmund last season.

Yet Soriano insisted the club did some thorough checks before pushing the button on the move.

He told the Dr Football Podcast: “We looked at this and we are convinced he’s fit and he can play at the maximum level, we’ve done every medical check we could do and we are confident.”

While City have brought huge names to the Etihad since their Abu Dhabi takeover 14 years ago, many believe Haaland is the highest-profile signing so far.

Soriano added: “We are of course very excited – but all the football decisions and signing decisions are taken through a football lens, not marketing or celebrity.

“Txiki Begiristain [City’s director of football] and Pep think very carefully about what they need.

“In this case he has the profile of a superstar but this is not why we signed him – it’s because we think he’ll score a lot of goals.

“And he can adapt to our system. It’s very sophisticated and you have to be a sophisticated player to adapt to this – and we think he will.
“But I promise you it’s a football decision.”

He said: “Alfie Haaland, his father, he’s a former footballer, very smart, he understands the Premier League and Manchester City as he played for them. He was a good advisor to his son. ”