In case you missed the news, where have you been?

Cristiano Ronaldo has told Manchester United he wants to leave this summer. Family reasons have been cited as the cause of his absence, however the Portuguese forward is yet to report for pre-season training nor Erik ten Hag assesses his squad.

In theory, United’s new manager should be devastated to lose one of the most prolific forwards to grace the game. However, the overriding feeling might actually be one of relief — Ronaldo’s exit could improve Ten Hag’s chances of building a cohesive team dynamic.

Even at 37, Ronaldo will almost guarantee you goals. But in the twilight of his career, does he improve his team’s chance of success?

Let’s dig into the data and find out.

We can start with the obvious. It is an understatement to say that Cristiano Ronaldo is very good at finding the back of the net.

His tally of 18 league goals for Manchester United last season was actually his lowest since his final campaign at Old Trafford in 2008-09. Before 2021-22, he had scored at least 21 league goals in 12 straight seasons during his time at Real Madrid and Juventus — in seven of those, he scored more than 30.

Including penalties, Ronaldo’s goalscoring record has not dipped below one goal every 180 minutes (ie, two games) since he was 20 years old during the 2005-06 season — a quite outstanding achievement. 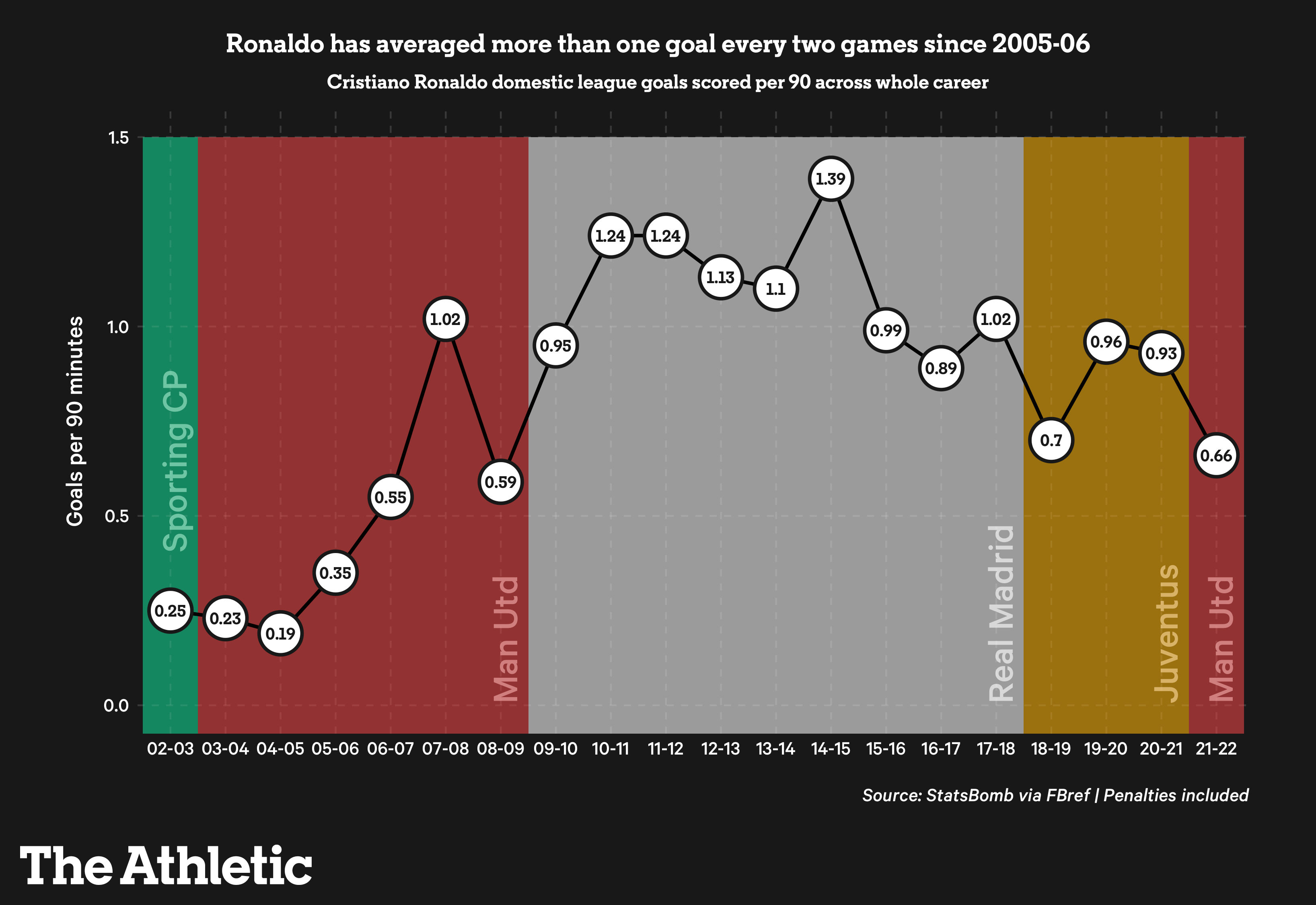 No need to dwell on it — we’re all agreed on the Portuguese’s individual contribution.

As many pundits and fans have highlighted, what Ronaldo adds in individual goals he often takes away from the wider team structure.

Teams adapt to Ronaldo rather than Ronaldo adapting to the team — and this is not new. 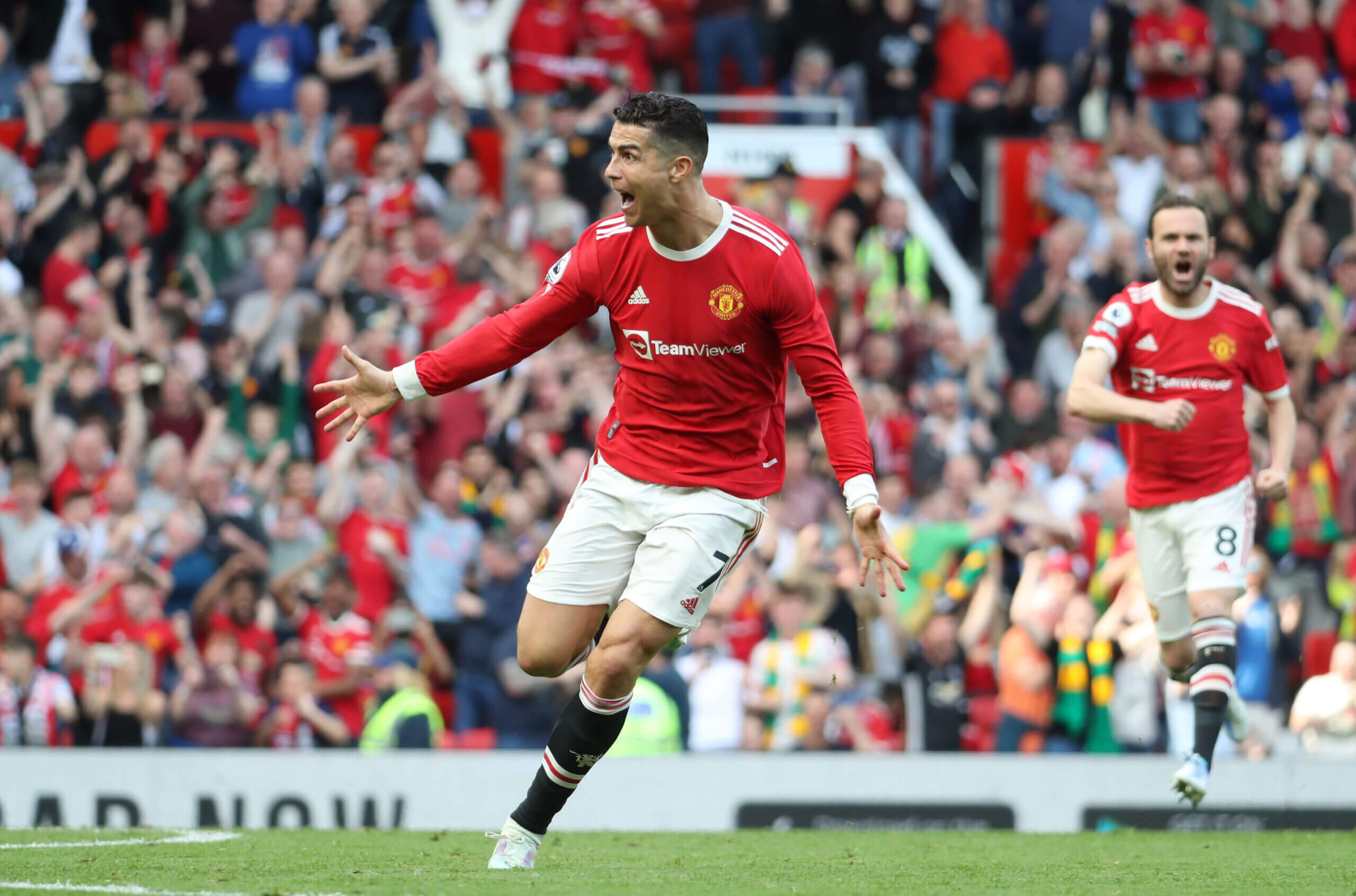 During his first spell at Manchester United, Carlos Tevez, Wayne Rooney and Park Ji-sung were tasked with covering the extra yards defensively to mask the lack of defensive contribution that Ronaldo offered.

This is fine in principle. When that machine is well-oiled, the dynamic team can still work. When it is not well-oiled — as was the case at United last season — it can malfunction, splutter and grind to a halt very quickly.

So, does Ronaldo improve his team? In his first spell at the club, Ronaldo left United in the strongest possible position following three consecutive Premier League titles.

However, for his subsequent moves, the end of Ronaldo’s tenure coincided with a slide in overall team strength. To measure this, we can look at each of his team’s ClubElo ratings trended over time.

ClubElo is a rating system that allocates points to teams when they win. It awards more points for beating tougher sides (for example, Paris Saint-Germain in the Champions League) and fewer for dealing with easier opponents (for example, Norwich City in the Premier League). Likewise, the points a team can lose for a defeat are weighted by the quality of the opposition.

Looking at Manchester United’s ClubElo rating since Ronaldo returned, there is a very discernible drop — the sharpest decline in the past five years. 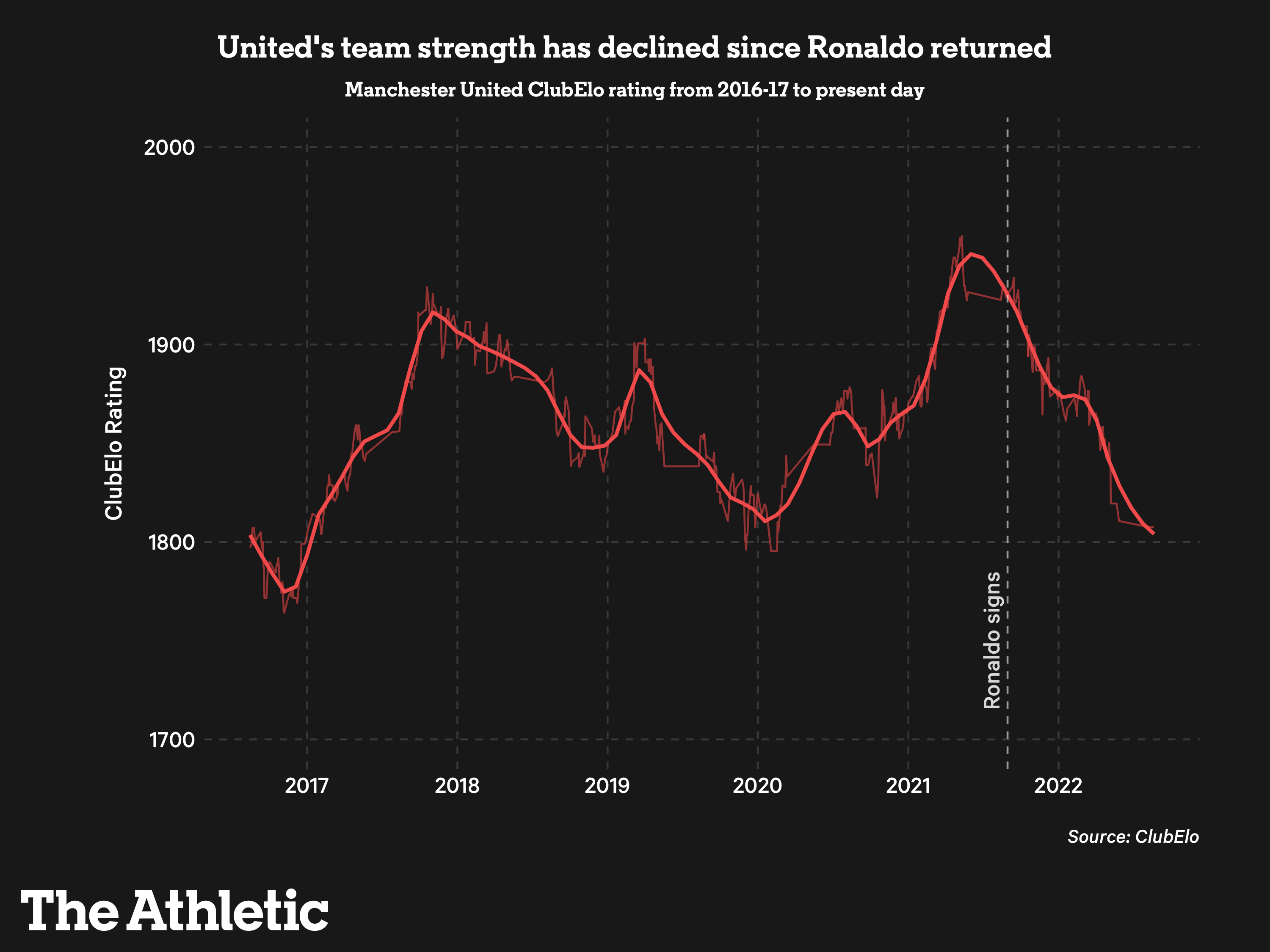 Of course, correlation is not causation. Ronaldo’s arrival has not been the sole reason for United’s struggles last season, but it speaks to a wider point on the attacking contribution of the team versus the individual.

In 2020-21, United scored 73 goals in the Premier League on their way to finishing second under Ole Gunnar Solskjaer. Adding Ronaldo to the equation in 2021-22 was meant to be the star quality to provide the final push for the title but United’s sixth-placed finish saw that goal tally drop to 57, despite the Portuguese’s 18 goals.

Put simply, all attacking roads led to Ronaldo. He was responsible for 21 percent of United’s shots in the Premier League — higher than any of his team-mates with only Bruno Fernandes close to him with 17 percent. Whether he was in the best position or not, Ronaldo demanded the ball to be played into him.

Off the ball, data from StatsBomb via FBref showed Ronaldo’s 6.7 pressures per 90 were the lowest of any midfielder or forward in the United squad. For wider context, that placed him in the bottom one per cent of forwards in the Premier League last season. You have to take the rough with the smooth when it comes to his playing profile.

This trend stacks up with his former employers. Before Ronaldo arrived at Juventus in 2017-18, their stellar 95-point title win saw them score 86 goals in Serie A. In Ronaldo’s first season, they still won 90 points but scored just 70 goals. The team’s top goalscorer? Ronaldo, of course, with 21 goals.

An even higher 28 per cent of Juventus’s shots were taken by Ronaldo in 2018-19 — a total of 170 shots dwarfing his nearest team-mates’ tally, Paulo Dybala second with 64 shots (11 per cent) for the season. What Dybala compromised in attack he made up for with his work rate off the ball, with 18.3 pressures per 90 — nearly double that of Ronaldo with 9.4 pressures per 90. Can you see a pattern emerging?

Returning to the ClubElo ratings, a similar pattern can be seen. Juventus’ team strength declined during Ronaldo’s spell in Turin despite two consecutive titles in his first two seasons at the club. He was brought in to help Juventus push for the Champions League title but left with the club further adrift than when he arrived. 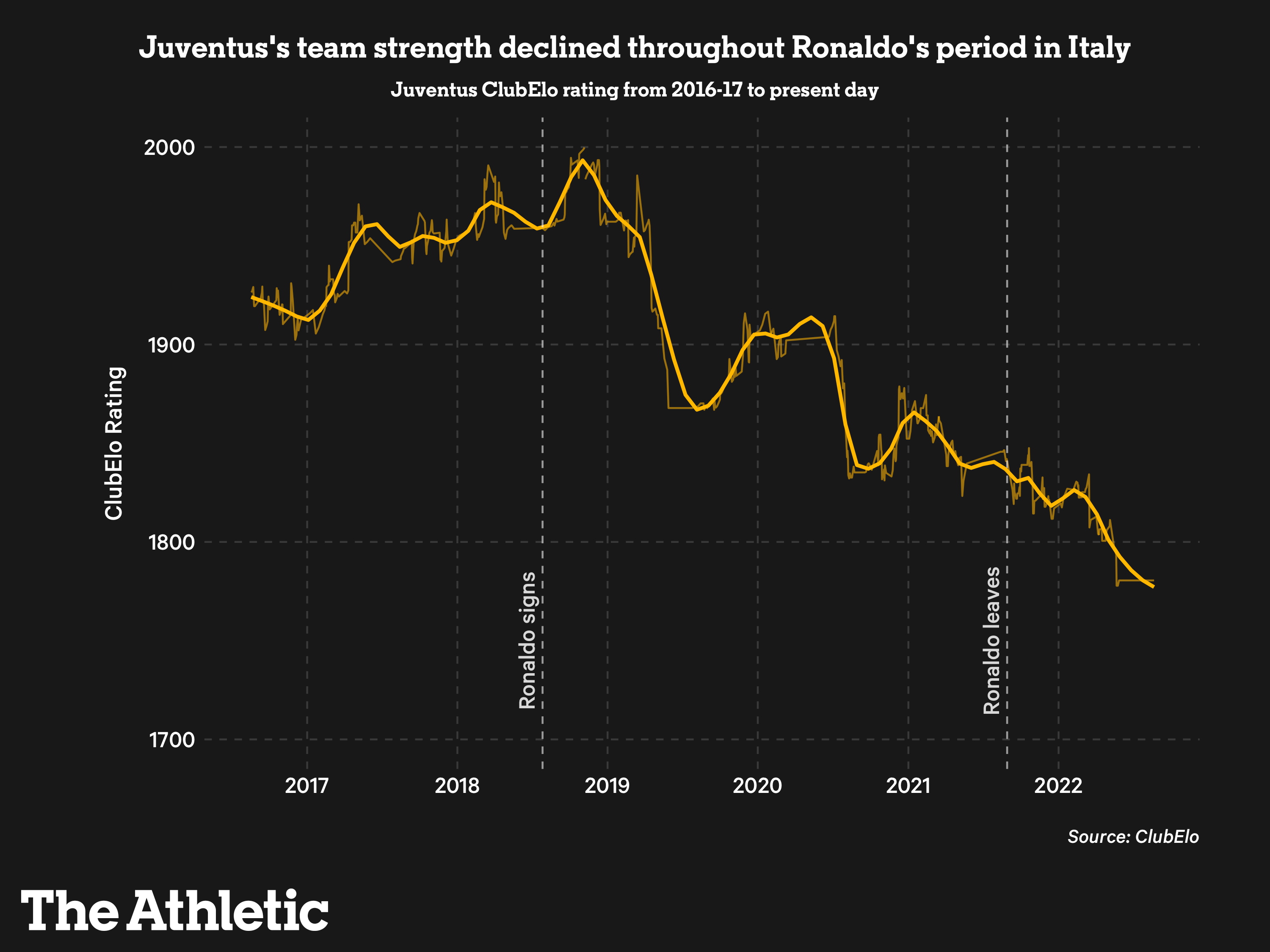 Was there a reliance on Ronaldo to produce in Turin at the expense of team cohesion? Juventus defender Leonardo Bonucci revealed to The Athletic that team complacency may have set in on the pitch.

“Cristiano’s presence had a big influence on us. Just training with him gave us something extra but subconsciously, players started to think his presence alone was enough to win games,” Bonucci said. “We began to fall a little short in our daily work, the humility, the sacrifice, the desire to be there for your team-mate day after day. Over the last few years, I think you could see that.”

Far from an unsuccessful period at Real Madrid — winning two La Liga titles and four Champions League trophies — the pattern could extend to the latter period of Ronaldo’s time in the Spanish capital.

Ronaldo finished as Real Madrid’s domestic top goalscorer in all but one (2009-10) season during his time at the Bernabeu, but following their team peak in 2016-17 — which saw a La Liga and Champions League double — there was a decline in team strength as Madrid finished third in the league the following season.

The data is less clear-cut as we go back further, but from an attacking perspective, Karim Benzema was known to play a supporting role for Real Madrid to allow Ronaldo to prosper. Now the main man, the 34-year-old Frenchman has just enjoyed the most prolific season of his career in 2021-22, scoring 44 goals as Madrid won the league and Champions League double. 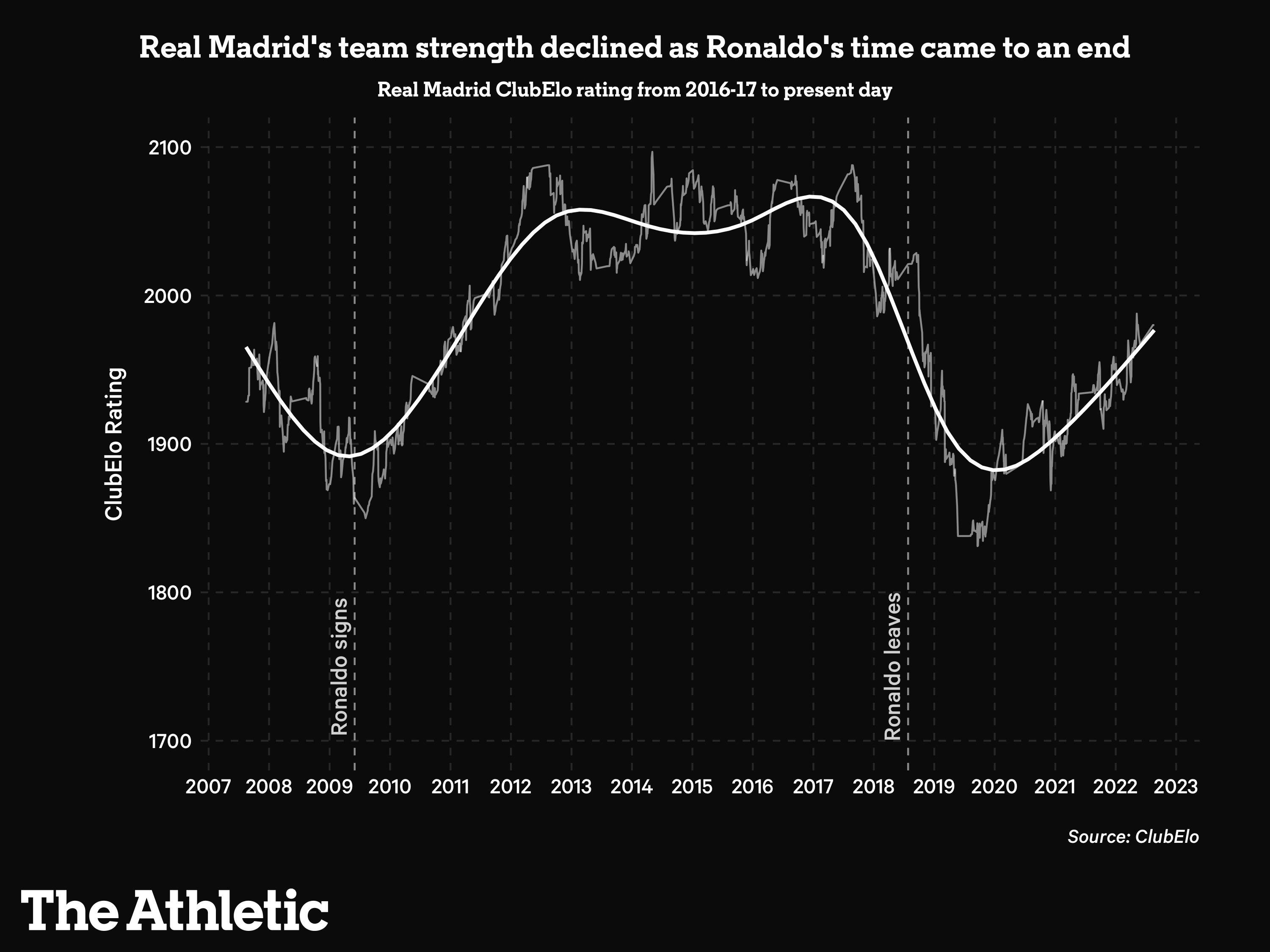 These are all patterns that are worthy of note rather than hard conclusions, but questions could be reasonably asked about Ronaldo’s influence on the team’s success after entering his 30s. How much is a side willing to accept its weaknesses off the ball to maximize its strengths in front of goal?

Back to the present day.

If any move were to materialize for Ronaldo, who would want him? With Bayern Munich, PSG, and Napoli all unlikely options, Chelsea have been the leading contenders to show interest in the 37-year-old after co-owner Todd Boehly met with Jorge Mendes, Ronaldo’s agent, last month.

Whoever the club might be, the pool is small. Any buying club would have to be competing in the Champions League, able to cover Ronaldo’s eye-watering wages and able to guarantee him regular game time. His minutes played figures have hardly dropped in recent seasons. 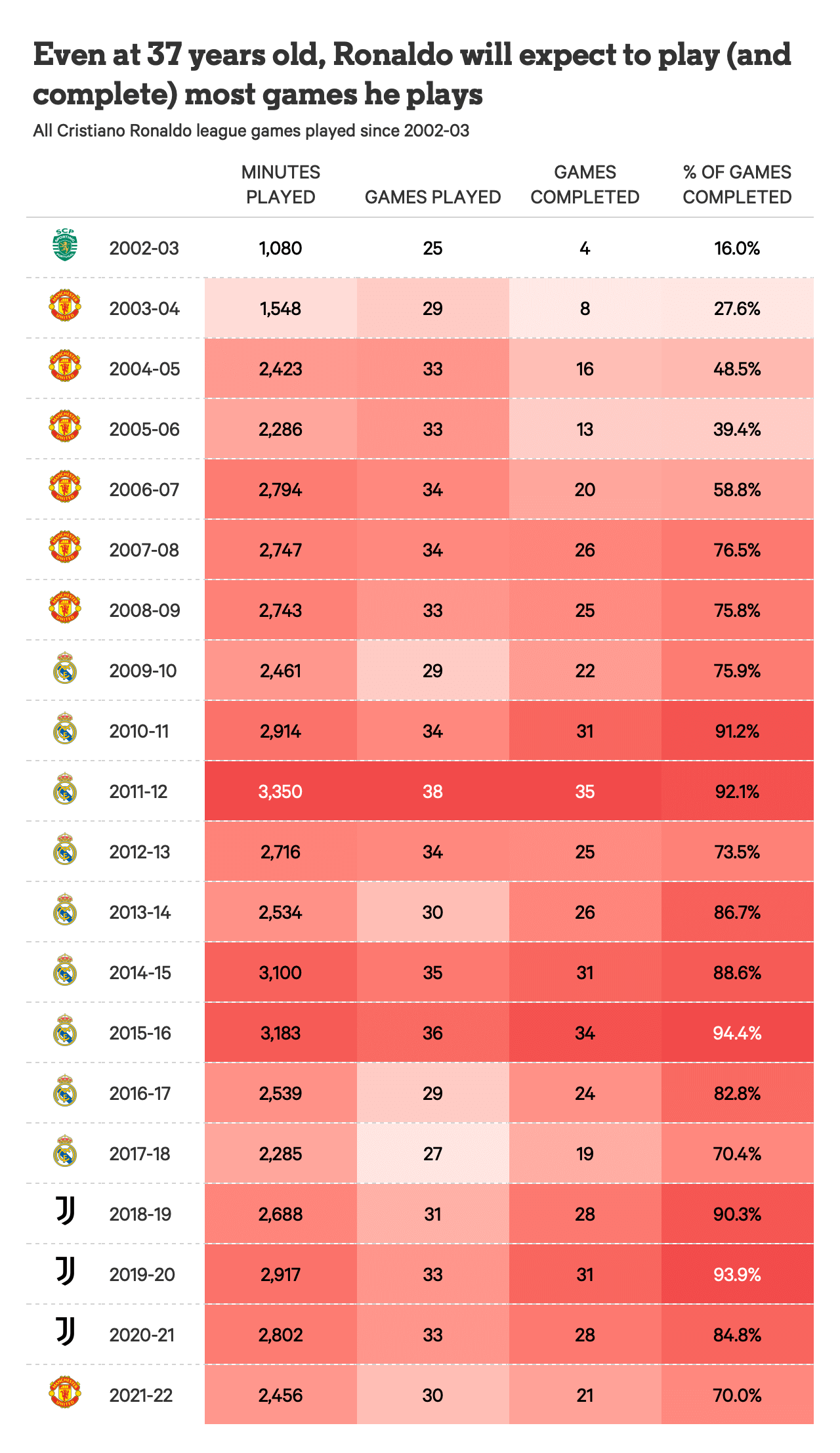 With Ten Hag having a clear style of play from his time at Ajax, he will no doubt be determined to stamp his authority on the team and establish a clear way of working that requires everyone in the squad to be on board.

If Ronaldo leaves, it could be a blessing in disguise to help him achieve that.