Beneath the smiles, the laughter and the one-liners, Marc Cucurella’s first season in the Premier League with Brighton and Hove Albion hasn’t always been fun.

Interviewed on stage at the Amex Stadium after winning the Player of the Season awards from fans and his team-mates, the Spanish defender joked to head coach Graham Potter, sat nearby: “Eh gaffer, next season put me on the bench, I don ‘t like speaking English! ”

The banter was accompanied by an element of truth. There were real challenges and moments of deep anxiety when Cucurella arrived on the south coast at the end of August after a £ 15-million move from Getafe with partner Claudia and their two baby boys, one just 10 days old.

Cucurella tells The Athletic: “In all of my clubs I like to joke, funny moments. It is important that the team is a good unit, that there’s a good atmosphere on and off the pitch, to fight together.

“When I arrived here it was difficult at first. I did not speak good English – maybe three or four words. I was not happy because it was not the real me; I could not be myself.

“It was very difficult, going to the doctors with the kids, speaking to teachers. We did not have the words to explain any problems. Now it’s really good. We go to cafes, Brighton Pier, shops. ”

Looking back on a memorable night with @ Cucurella3 and @ EnockMwepu45! 🎙️📺

Cucurella has come a long way in a short space of time. He has hour-long English lessons from a tutor with Claudia twice a week at home in Hove.

Spanish goalkeeper Robert Sanchez, Argentine midfielder Alexis Mac Allister and Spanish first-team coach Bruno Saltor have also been a big help in coping with the kind of difficulties often overlooked when a player from abroad comes to a different country, a different culture, a different way of life, and tries to perform to his best in elite company.

“Bruno would sometimes translate for me in the team meetings, which was important for me,” Cucurella says. “And when I was with Rob and Alexis, I was more relaxed. That was good for me in those early months.

“Now I understand a lot of things, but it’s more difficult speaking. I do not know all the words, so the vocabulary is shorter. In my mind I have the answers, but when I’m speaking, I do not have the words.

“It’s good for us when we’re out on the street or visiting the nursery with the kids. We practice and we learn. ”

Translation was not needed as Cucurella sat down with The Athletic at Brighton’s training complex in Lancing to discuss what it was like at Barcelona, ​​what it’s like playing for Potter, his World Cup ambitions and, yes, the long hair that makes him stand out as much as he has for his consistently accomplished performances.

“When I was a kid I had long hair, me and my younger brother (Lucas),” he explains. “My mother liked her boys to have long hair. I’ve stuck with it. Now it’s part of my personality, people like it.

“When I go to new clubs or meet new people, they ask me why do I have this long hair? I like it. My brother has cut his hair now. He used to have long, blond hair. We’re very different! ”

Cucurella was born and raised in Alella, a small village 10 minutes from Barcelona. He was in Espanyol’s academy before getting the opportunity at the age of 14 that aspiring players from the region dream about.

“I remember it was one Sunday, I was at home with my father,” Cucurella says. “He was having a siesta and showered before a meeting with Barcelona’s academy director.

“I was very nervous. I’d been in the academy at Espanyol for a long time, but it was such a good opportunity. A lot of my family support Barcelona.

“It’s one of the best clubs in the world. When I was there, they had Messi, Neymar, Suarez. The philosophy is the same for all the teams: to play good football, the same movements.

“It was important for me. A lot of the things I’ve learnt on the pitch came from my Barcelona career. I sometimes trained with the first team, went on tour to the USA in pre-season. When you play with these top players, you learn.

“At first you are very nervous. I remember when I saw (Javier) Mascherano for the first time, he said, ‘Good morning’ and I did not say anything, because I was so nervous. “

Cucurella made 48 appearances for Barcelona’s B team but missed out on playing for the first team at the Nou Camp.

His only first-team outing was seven minutes as a late substitute in place of Lucas Digne – now a rival at Aston Villa – in a 3-0 win at Real Murcia in the Copa del Rey in October 2017. 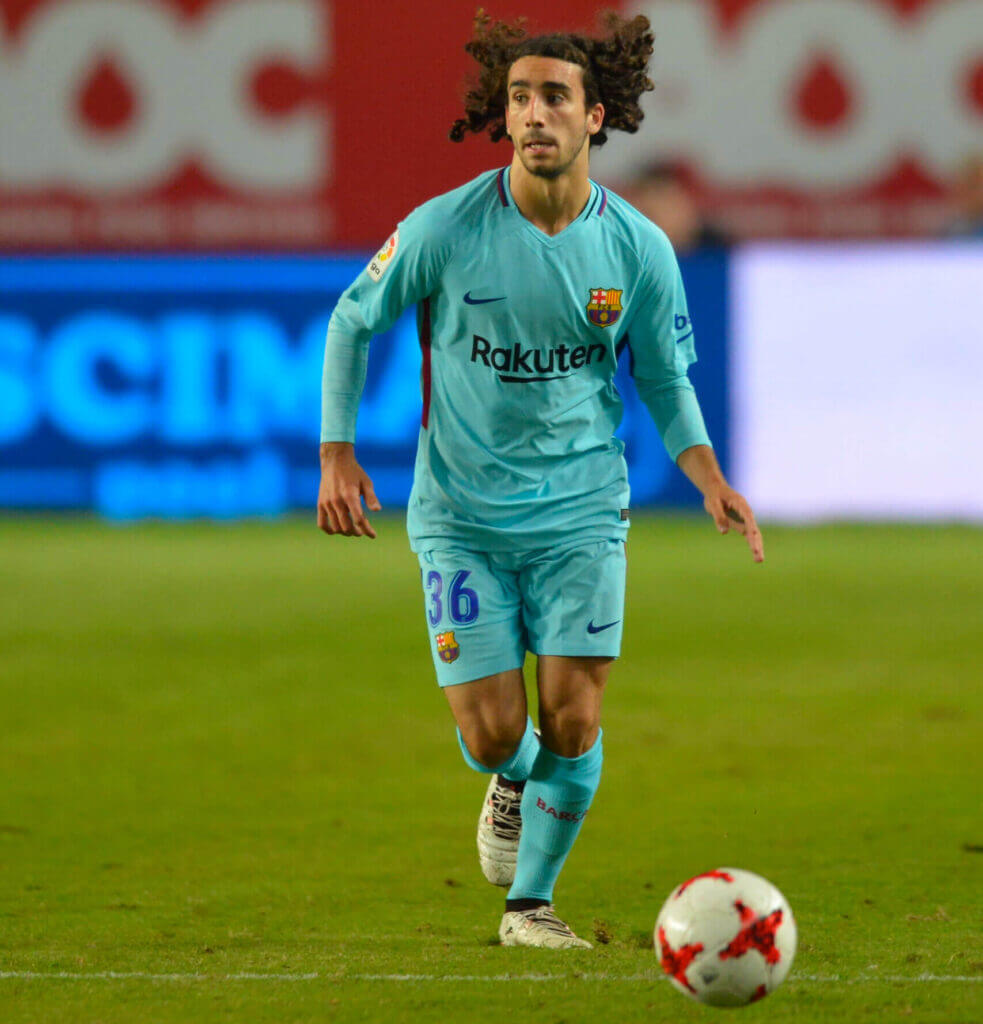 “I was on the bench with (Ivan) Rakitic and (Sergi) Roberto,” Cucurella says. “The coach told us to warm up. The gaffer called them back to go on.

“I did not like it, because the minutes were ticking by, I was still warming up and I was thinking maybe I would not play. I played a few minutes, which was one dream completed.

“When I went to the dressing room, I kept the shirt, the warm up kit. I was No 36. I have that blue shirt in my home in Hove. ”

“It’s easy being in Barcelona where we have friends and family, but it’s good sometimes to leave your city and stay alone in new places, new experiences,” he says.

“When I went to loan it was the first time me and Claudia had lived alone outside Barcelona. We learnt a lot of things. It’s been good for us. We are 23 and 22 and we have a lot of experience. ” 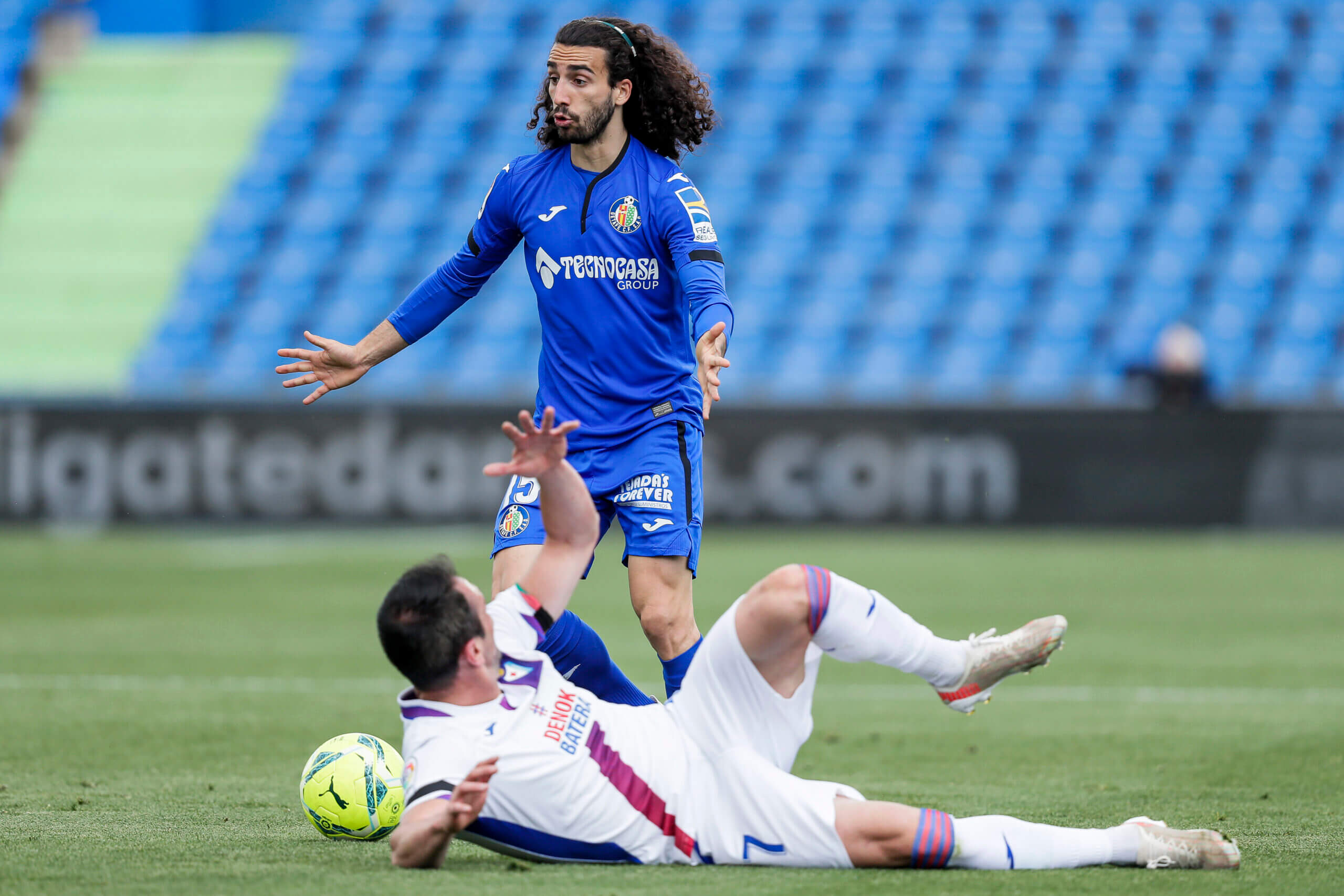 Meanwhile, Cucurella is enjoying himself under the lateral-thinking Potter. He regards left-back as his best position but has relished learning a new role on the left of a back three.

“I played there for one or two games in my life before I came here – only for the last minutes, not starting games,” he says.

“The first game at center-back was Chelsea away. I was very nervous, because I’ve never played in this position. Chelsea play with Lukaku and top players, but I played really well in that game (he provided the cross for Danny Welbeck’s stoppage time equalizer).

“The gaffer has given me a lot of opportunities there. He asked me if I’m comfortable in that position. I like it, it’s good for me, learning to play in a new position, and for the team as well. ”

Playing under Potter reignites for Cucurella fond memories of the philosophy at Barcelona.

He says: “Before I came here, my agent said all the time Brighton play really good football. They have been near the bottom, because they’ve drawn a lot of games, but they create a lot of chances without scoring.

I spoke with him (Potter). I saw the three games at the start of the season. When I came here the first day, in training I saw we like playing with the ball, which is one of my qualities.

Cucurella’s eye-catching debut campaign has prompted speculative reports linking him with Chelsea, Tottenham and Juventus. He signed a five-year contract and Brighton are relaxed about the situation.

It would require the type of offer they could not refuse to lose a player already cemented as a key figure in Potter’s future plans. Cucurella has started all 34 league games he’s been available for, completing 3,002 of 3,060 possible minutes.

His first goal for the club in the 4-0 drubbing of Manchester United at the Amex earlier this month was accompanied by a tearful celebration aimed at family members (sons Mateo and Rio are two-and-a-half and nine months old).

“What a GREAT day this is turning into for Brighton!” 👏

A brilliant finish from Marc Cucurella to double their lead at the Amex… pic.twitter.com/0irLtjZpkp

Cucurella has adapted seamlessly to the demands of the Premier League. “It’s more physical, the players are faster, it’s more competitive,” he says. “In Spain, the teams stay more in a system, 4-4-2 maybe. Here, everything happens quicker, there’s more pressing.

“When I watch La Liga on TV you see the difference. It’s more difficult here when you have the ball – you need to pass quickly. The fans live it more. All the stadiums are so loud and the atmosphere is incredible. It’s now maybe the best league in the world. ”

In the dining room at home in Hove, the silver medal Cucurella won with Spain’s under-23s at the Tokyo Olympics last year hangs as a proud reminder of his international aspirations.

It’s unlikely he will force his way into Luis Enrique’s squad alongside Brighton team-mate Sanchez for the World Cup in Qatar in November and December. Barcelona’s Jordi Alba, Valencia’s Jose Gaya, Chelsea’s Marcos Alonso and Alex Grimaldo (Benfica) are currently ahead of him, but it probably won’t stay that way for much longer.

“Now it’s difficult, because we have good left-backs,” Cucurella acknowledges. “I need to work hard, play well, similar to this season, and go to the World Cup if possible.

“If I do not go to this World Cup, I’m young, I’ll have more opportunities in the future.”

He will if he continues the way he’s started. Cucurella can’t quite believe himself how well it has gone so far.

“I came here one time for a holiday two years ago, in London. Me and Claudia, ”he says. “Speaking to people when we went to a restaurant to order dishes was very difficult.

“I thought I’d never speak English. But now when you come here, practice.

“Sometimes at home, in my mind I remember words in English, not in Spanish. Now I’m very happy, a good step in my career, coming to this team in the Premier League. “