Hello, and welcome to our liveblog on another big night for Irish sides in Europe.

We’ll be covering Shamrock Rovers in a separate liveblog later, but for now, we’re focusing on the Europa Conference League with both Irish sides’ games set to kick off at 6pm.

We’ll focus primarily on St Pat’s, as they travel to face CSKA Sofia, while also keeping an eye on Sligo’s encounter away to the Norwegian side Viking.

Both League of Ireland teams have done well simply to get this far — neither would have been favorites in the last round, as Sligo upset Motherwell and the Saints overcame Tottenham’s conquerors from last year Mura.

The goal this evening for both will surely be to just keep the tie alive ahead of the second leg back home.

It won’t be easy. Bulgarian football is a decent standard, as Shamrock Rovers found out recently when they were dumped out of the Champions League by Ludogorets. And CSKA showed their quality in the previous round with a 4-0 aggregate victory over Makedonija Gjorče Petrov.

Similarly, Viking, who beat Sparta Prague in the second round, will be very tough opponents for John Russell’s men.

Confirmation of the Pat’s and Sligo teams below…

No changes from our previous European games

Cawley captains the side

Bolger among the subs 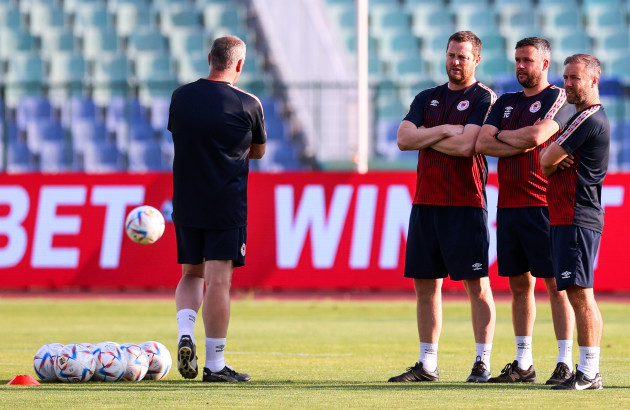 St Pat’s coaches during the warm-up.

A bad start for Sligo.

An initial shot from the edge of the area is saved by McNicholas, but it’s parried straight into the path of Zlatko Tripicwho slots home an easy tap-in.

There hasn’t been too much of note in Pat’s game so far.

Tim Clancy’s men have largely sat back and allowed the hosts possession.

As I type however, the Irish side break but Billy King’s shot is off target.

It’s been a nightmare start for Sligo.

Tripic is involved again. This time, his low cross finds Fridjonssonwho shows some neat footwork to evade the defender’s challenge before firing an unstoppable finish into the roof of the net.

Meanwhile, in Bulgaria, Pat’s have had a much better start than the Bit O’Red.

CSKA have not carved out any clear-cut opportunities yet, with the visitors doing well to frustrate them.

Forrester plays a clever pass through to Cotter, but he misses his cross and it goes harmlessly out of play.

The pitch in Bulgaria doesn’t look great from this vantage point and may have been a factor in that instance.

In Norway, Aidan Keena goes from the spectacular goal, but his effort from the edge of the area misses the top corner by a few inches.

Moments later, another blow for Sligo. Garry Buckley is down injured and looks like he won’t be able to continue.

Confirmation that Buckley has been stretchered off after coming off worse in a 50:50 challenge with Tripic. Nando Pijnaker replaces him.

That’s Sligo’s second enforced change of the evening, as Adam McDonnell went off injured earlier and was replaced by Max Mata. 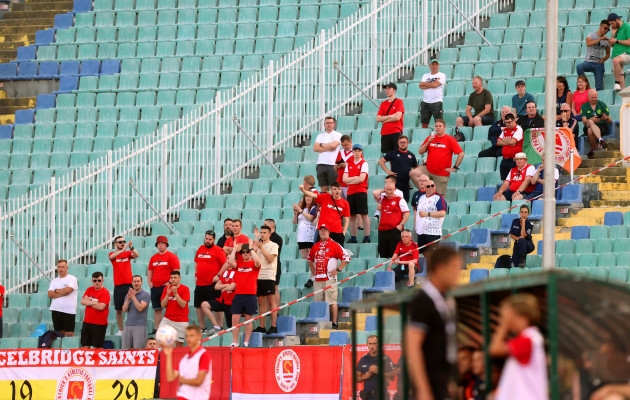 A view of the traveling St. Patrick’s Athletic fans at the game.

As expected, the hosts have dominated possession while lacking a cutting edge.

As I type though, Maurício Garcez’s shot from the edge of the area is spilled by Anang, but the goalkeeper is fouled by Thibaut Vion as he attempts to gather it at the second attempt.

Half chance for Sligo.

A corner falls into the path of Mata, but goalkeeper Gunnarsson is alert and smothers the ball before the substitute can get a clean shot away.

Another good effort from Keena.

It breaks for the striker on the edge of the area and his subsequent powerful shot goes inches over the bar. 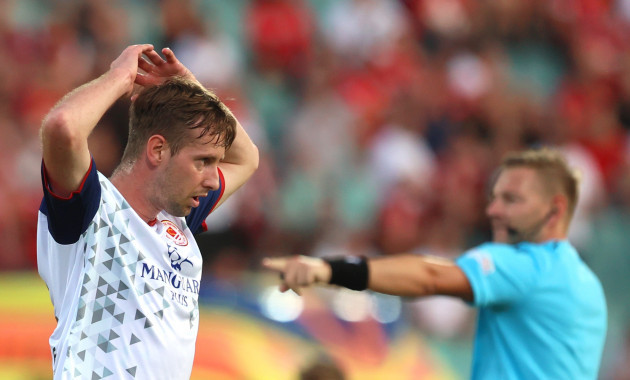 Pat’s have been under the basket a bit more in recent minutes.

There have been plenty of corners and balls into the box, but they have defended very well to keep the hosts at bay. 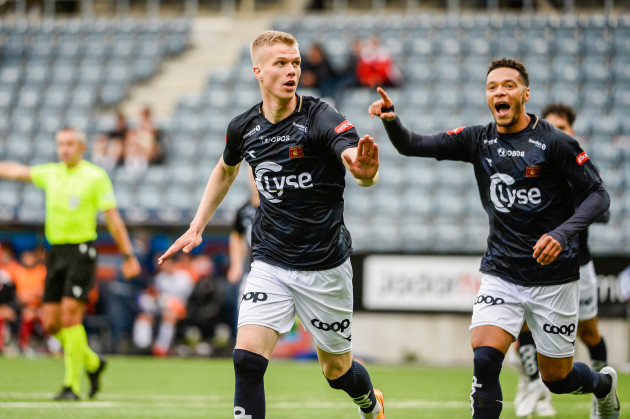 So half-time in both games.

Pat’s will be pretty happy with the opening 45. While CSKA have controlled the game, they’ve struggled to create clear-cut chances, with the Irish side defending impressively and putting in a real shift off the ball.

It’s a different story for Sligo, however. A disastrous opening eight minutes saw them concede twice with two well-taken goals from the hosts’ perspective.

John Russell’s side have calmed the storm to a degree since then while creating occasional half chances.

Nevertheless, Viking have looked the far superior side based on that first half overall, with the Bit O’Red leaving themselves with a mountain to climb as they look to get back into this tie.

The second half is underway… 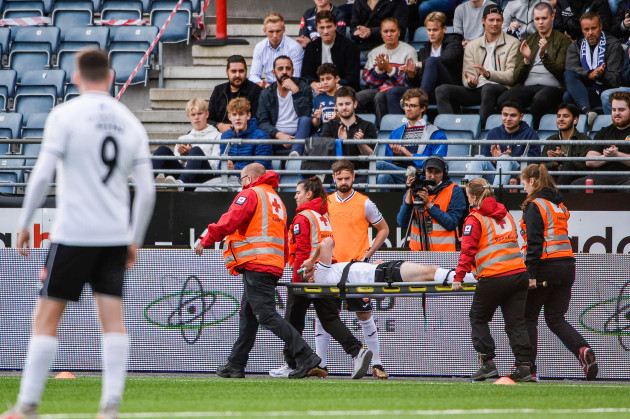 Pat’s have started the second half well.

Breslin plays in a dangerous free kick that Forrester can’t quite get a decisive touch on.

Moments later, O’Reilly threatens to sprint through on goal, but the defender gets back to make a good recovery challenge. 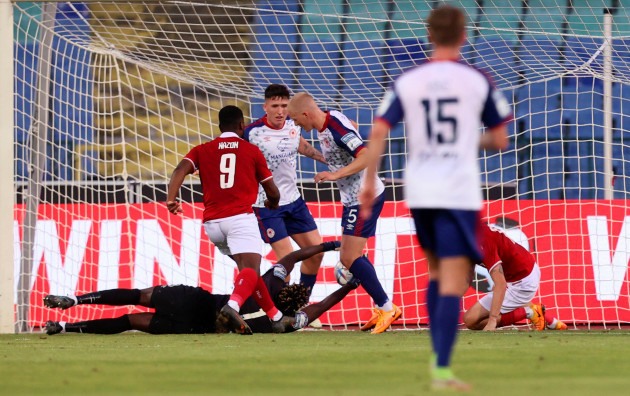 Tripic is the provider again. He makes a good run down the left before his cross finds Mai Traorewho converts with ease.

Unfortunately, that could already seal the tie for the Norwegians. It would take a minor miracle for Sligo to win it from this position.

Forrester plays a through ball for Doyle, whose finish comes off the crossbar.

The linesman’s flag was up for offside anyway, but that’s another indication of Pat’s positive play.

This is turning into a really bad night for Sligo.

A well-worked flowing move ends with Sandberg curling a fine finish into the corner of the net.

The Bit O’Red sadly have looked out of their depth at times this evening.

A rare nervous moment for Pat’s.

A Bamba through ball causes panic with the ball taking a few ricochets before going out of play.

Less than 20 minutes of normal time now for the Saints to hang on for what would be an excellent result.

16-year-old Sam Curtis comes on in place of Harry Brockbank.

Another cross into the area from CSKA is overhit.

The hosts have really lacked quality in the final third this evening.

Billy King breaks and goes on a mad individual run.

He has options to his left and right but instead shoots just over the bar from just outside the box.

It’s his last action of the game, as he’s replaced by Serge Atakayi.

CSKA loses the ball in a dangerous area.

O’Reilly then plays it through to Doyle, who shoots over inside the area.

A free kick in a good position is wasted as Breslin puts it straight into the goalkeeper’s arms.

Pat’s are on the verge of a famous victory!

It comes from a hopeful long ball.

Donchev tries to head it back to the goalkeeper, but it’s short, and I attacked shows great pace to get to the ball first, going past the goalkeeper and putting it into the net.

Two goals in quick succession in a tie that’s effectively all over.

Austbo curls in a fine finish from the edge of the area.

Here’s a look at the winning goal…

WHAT A MOMENT FOR ST PAT’S!
Serge Atakayi latches on to a long ball, rounds the keeper and potentially secures a famous win for the Inchicore side away to CSKA Sofia#rtesoccer
📺 Watch Live – https://t.co/lu7hcoyPvA
📱 Live updates – https://t.co/YGPDPe4q4G pic.twitter.com/sZAwBzZlbJ

A forgettable night for Sligo, as they were ultimately well beaten by a better team and appeared to have no chance of going through barring a miracle.

Pat’s, on the other hand, have put themselves in a hugely promising position.

A gutsy display largely restricted CSKA to half-chances and they finished strongly, to the point that Atakayi’s winning goal, when it came, was not against the run of play by any means.

They can’t afford to get too carried away of course, with 90 minutes to play in Tallaght, but they still should savor tonight amid what is surely one of the best standalone results ever from an Irish side playing in Europe.

Right, that’s all from me for now.

Thanks for reading and commenting.

We’ll have more reaction to follow and you can read our Pat’s match report here.