The Premier League season may have just finished but Arsenal are still getting use out of the Emirates pitch.

A group of 22 young footballers aged between 14 and 18 (an even split of under-15s and under-18s across both teams) are participating in a trial after being highlighted by the STATSports’ Arsenal FC Edition app. The app is paired to a GPS tracker that shares their physical performance data with Arsenal.

Those who display similar physical capabilities to academy players their age will then be invited to the trial by STATSports and Arsenal, who also see video footage of the players before selecting them. Some players have come from Northern Irish Premiership sides, while one Ukrainian youngster based in Prague also made it to the trials.

In October, The Athletic took part in a STATSports training session at Arsenal’s training ground to test data-driven methods they are opening to the public. The aim that day was to explore the importance of high-speed running and distance in elite sport compared to amateurs, and how Arsenal use that data to aid both their academy and first team.

Seven months later, their academy could directly benefit. The Emirates trial day will give these youngsters the chance to show Arsenal exactly what they’re made of – GPS data trackers will compare their physical stats with players across the men’s and women’s academy, not to mention first-team squads.

But how did they get to this point, how does it compare to conventional recruitment, what happens next and what are the benefits?

“The main thing to point out is when you sign up to the app, that data is shared with Arsenal. We would have a database that has all the Arsenal users in terms of what position they play, gender and age, ”Watters tells The Athletic.

“You look at five key metrics: total distance, high speed running, high intensity distance, max speed and the ProScore itself. There’s other touchpoints as well in terms of footballing ability because that is the most important aspect, we know that at STATSports as well.

“What we’re doing is bringing people forward that we know are physically capable of performing and then the guys from the scouting team today would look from a different mindset to add everything together.”

To whittle the number of participants down to 22, those contacted had to submit video footage of themselves playing football to find a marriage between their data and the eye test. Although STATSports and Arsenal always had this day in mind, not all players who donned the vest with the GPS tracker knew what was to come.

“My mum got it as a present for my birthday and I started using it in January,” says 17-year-old Linfield central midfielder Esquivel McGann. “I did not even know this (trial) existed. I was just going to wear it and that was it. Then I got an email saying something about playing at the Emirates.

“I’ve just been using this every match and uploading my stats. I was really just trying to improve on the areas I thought I was weak on. (There is) motivation with this (the vest and GPS) on. ” 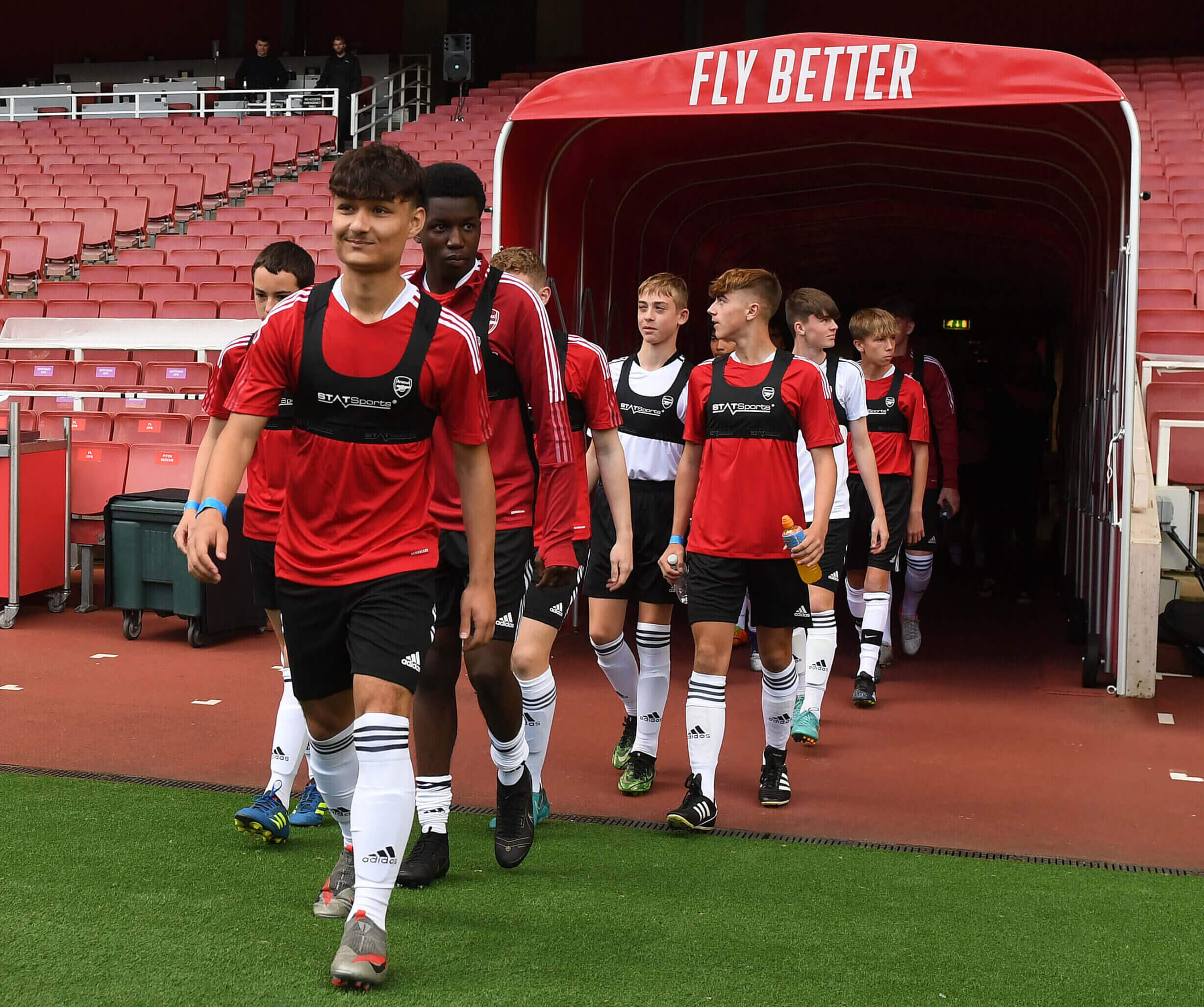 Aligning with Arsenal’s views on recruitment while giving people exposure they may not have had otherwise is a balancing act. Aside from participants having to submit video footage before being selected, the day itself had to incorporate aspects both STATSports and Arsenal deem important.

With the drills overseen by Arsenal academy coaches, the club got a proper sense of the players that had been selected.

“I’m yet to see any data that tells me about someone’s character and personality, which is key,” says Brown. “It’s about the person. We can all do the things that give us data, that’s great, but their character and the coach getting to understand them and having that relationship is huge. ”

“Data gives you the opportunity to create a dataset where you can look at players from the same position and look at key aspects of those positional profiles, so you’re judging like for like. It’s not the answer to everything, but it certainly helps in the decision-making. We can assess our players and compare them to players outside the club. ”

Taking note of both the data-driven and human aspects is particularly important when recruiting at academy level.

Per (Mertesacker) in the academy has implemented four pillars, which are: effective team player, efficient mover, lifelong learner and champion mentality. We have specific profiles (to look for) as well as the criteria that falls out of the four pillars, ”Brown says.

While the players on show at the Emirates have been highlighted for their physical capabilities, they all have their differences. As well as fruit dropping at different times, players’ talents can differ from being more physical to being more technically accomplished. There are internal solutions in the academy for players who appear to be technically gifted but still need to develop physically.

“There are those who are the late developers, or the ones who are physically younger than their age – we play those down in a year younger and probably just wait for them, ”Brown says. “If they’re technically good it’s wrong to just constantly put them out of their depth and just give them constant challenges where they physically can’t cope with it. So if the right thing is to play them down, that’s what we do. ”

When it comes to those internal solutions, technological advancements over the past 15 years have been particularly beneficial. It allows clubs to monitor players returning from injury or nearing overexertion, for example. Before leaving for Aston Villa in January, Calum Chambers explained how non-starters on a weekend would have a more intense start to the following week’s training than the starting XI, who would gradually build back up to match intensity.

“When I first broke in there was no technology,” Wilshere says. “There were heart rate monitors we used and then slowly, STATSports came in and it changed everything. I was a player who would have benefited from it when I was younger in terms of management and seeing where I was at and needed to get to.

“These young players have a great opportunity now because the numbers are there and there’s no hiding place. This is what the Premier League players do in training and match days. If you want to have a chance, this is what you have to do. ”

Wilshere is in a unique position using this equipment both as a player and as a coach.

Before signing for Danish side Aarhus in February, he was back at Arsenal training with the first team and coaching the under-17s, under-18s and under-23s. He is now nearing completion of the Senior Pro UEFA A License and also on the International Player to Coach program.

“I wouldn’t say it’s all about the GPS but it’s a big part of training preparation. In ‘this’ part of a session, we’re going to need to get ‘this’ amount of high-speed running,”The 30-year-old explains. 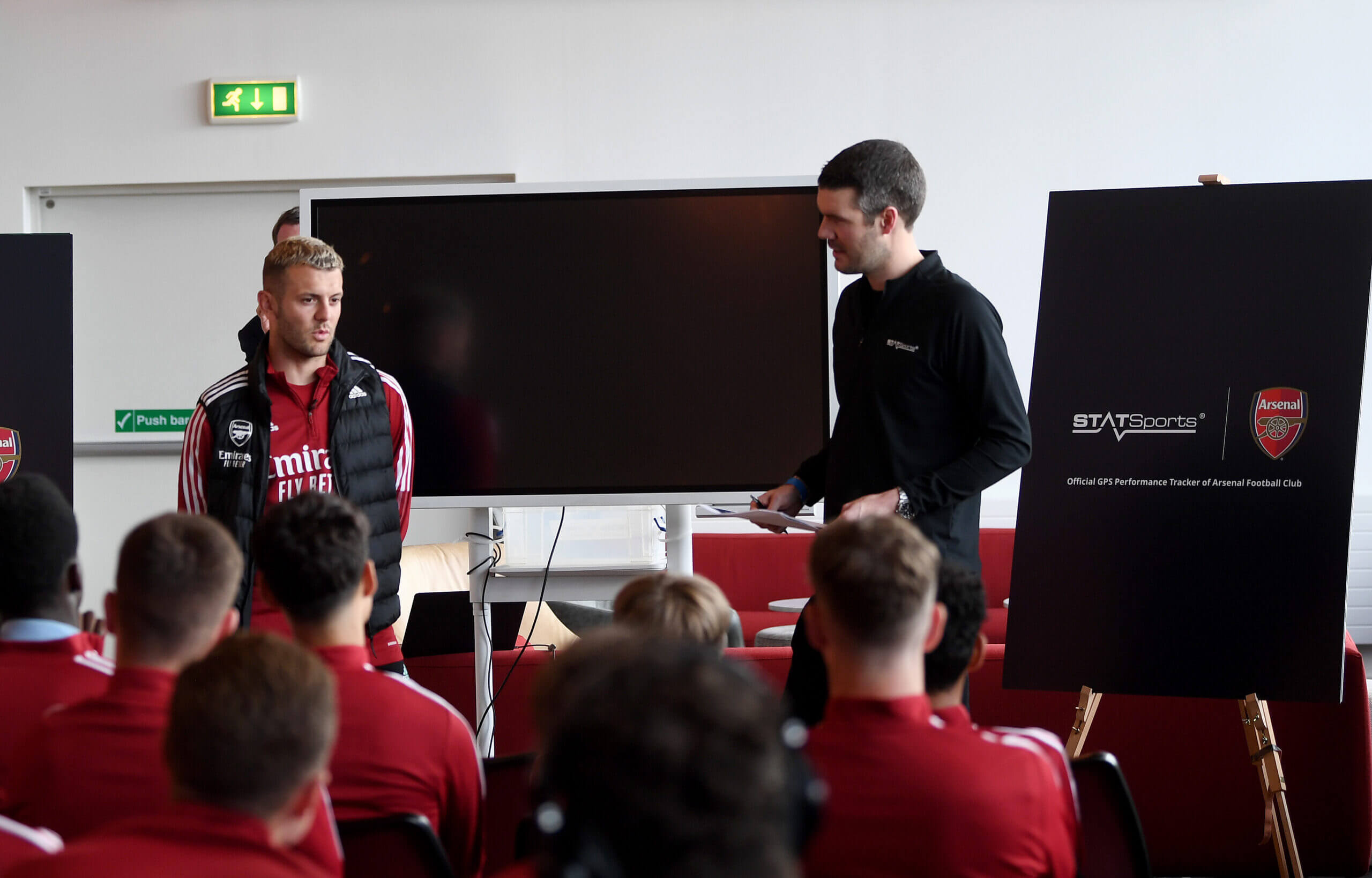 “When you’ve got the iPad on the side of the pitch and they’re doing sprints to see their top speeds or how far they’ve sprinted, that helps the players because it drives them more. If you go to the iPad halfway through the session and you’re bottom of the list for everything, you want to push yourself for the next session.

“I actually quite like it – it works quite nicely because when you go into a session, you know exactly what you’re going to get out of it. I’ve never coached without it, so I think it’s a big change for the older coaches who were around when there wasn’t any GPS. “

For all this use of technology, Arsenal have used more traditional methods of recruitment at academy level in recent years.

“COVID was challenging in many aspects for football but from a talent ID perspective, because of the government guidelines, we could not really get the development center up and running,” Brown says. “So when we were scouting, some of the lads were coming straight from the grassroots into the academy setting, which is a big step. Some of them thrived off that.

“There was a time where Lee Herron (Arsenal Academy Operations Manager) said, ‘Come on lads, get your coats on – let’s go and have a look around the local parks’, and we invited lads in who had just been playing around local parks. There was nothing else to do really! We got fed up with being indoors and sitting on Microsoft Teams. But when difficult times like that come you got to be creative. ”

And being open to different methods of scouting paid off as recently as this season.

“We found a kid off grassroots – and to find someone at 16 is really hard; it does not happen often – his name is Maldini Kacurri, ”says Brown. “He came in and his first game at under-16s was against Chelsea. He’s thrived ever since he’s come in and he got offered a scholarship. He’d only been in the building less than three months but he earned himself a scholarship.

“At any point, anybody can come into the pathway. The journey’s never straight, it’s never linear. People can come here at any level. One of the things I’ve learned being in London is that the grassroots football itself is an academy, so we’re probably picking out of the best pool of players in London. “

Maximizing that talent pool as well as expanding that reach is essential for a club like Arsenal. Not every player that is signed in their academy years will go on to make the first team, but by the same token, not every player who makes it to even the under-23s has been at Arsenal since childhood.

In regards to the first team, Hector Bellerin and Francis Coquelin are examples of talents who joined from abroad as teenagers. In a more historic sense, Ian Wright is one of the prime examples of football careers being non-linear, only signing his first professional contract months before he turned 22.

When STATSports Arsenal FC edition was released, one of the main aims was to contextualize data usage in football – not just giving the youngsters a taste of how physically demanding elite sport can be, but also allowing them the chance to get a feel for it by using the same equipment as professional players. On top of that, the aim of bringing aspiring footballers to the forefront for academy coaches to scout represents another way data analysis can be utilized, which may well benefit clubs in the long term.

“From STATSports and Arsenal’s point of view, that would be the dream,” Watters says on the prospect of Arsenal taking on players off the back of this event. “The fact we’re here today with these guys getting a chance to show themselves in front of the Arsenal staff is a massive step.”