HERE’S a little pre-season quiz question for you.

During the past five years, what is the closest any London club has come to winning the Premier League?

The answer is NINETEEN points — the distance between Chelsea and champions Manchester City in both of the past two seasons.

That’s a difference of more than six victories over a 38-game campaign and it’s the best any London team has managed since 2017.

So when Jurgen Klopp insisted, after Liverpool’s Community Shield victory over City, that we will not witness another two-horse race for the title — and referenced Chelsea, Tottenham and Arsenal as genuine contenders — you had to chuckle.

Antonio Conte’s Chelsea beat Mauricio Pochettino’s Spurs to the title in 2016-17 but since then, there hasn’t been a sniff of a challenge from the capital. 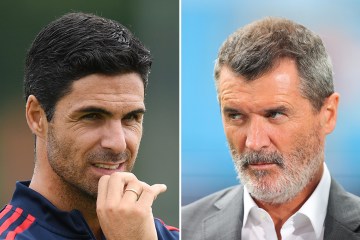 During that time Chelsea have won the Champions League, Spurs have reached the final and Arsenal have managed an FA Cup.

But the league form of London’s three major clubs has been risible — despite some eye-watering transfer fees over the past five years.

They simply don’t spend bad money like that at Anfield or the Etihad.

Listen, even though I’m a Londoner, I do know some Northern people. So I’m well aware of the fact that Londoners — and in particular the ‘London-centric media’ — are all ‘up ourselves’.

We believe the world revolves around our city and that civilization doesn’t stretch far beyond the M25.

But while London will provide more than a third of the Premier League’s clubs this season, it has always been an overrated footballing city.

It only boasts the same number of European Cups as Nottingham and Porto, and half as many as Amsterdam.

Until Arsene Wenger and Roman Abramovich came to town, the capital hadn’t boasted a truly great team in decades.

Yet Klopp wasn’t being completely spurious when he mentioned Chelsea, Arsenal and Spurs, because all three have made eye-catching summer signings.

Would you seriously fancy them to finish within ten points of either City or Liverpool?

After beating Chelsea 4-0 and Sevilla 6-0, Arsenal have clearly won the pre-season.

Well done. Hand them one of those imaginary trophies Wenger used to demand for finishing fourth.

After choking in last season’s race for the Champions League, Mikel Arteta’s side have made some interesting new additions — especially Gabriel Jesus and Oleksandr Zinchenko from City, and midfielder Fabio Vieira, who has some name to live up to.

But surely the Gunners cannot even dream of being close to Liverpool or City this term?

Spurs, under Conte — the last man to bring the title to London — are a seriously good shout to be this season’s ‘best of the rest’.

Their obsessive, demanding manager has brought in quality and experience and Spurs have broken with tradition in doing business early. Richarlison, Yves Bissouma, Ivan Perisic and Clement Lenglet, as well as the youthful Djed Spence, should all improve them.

But would you seriously fancy them to finish within ten points of either City or Liverpool?

Chelsea are the most unpredictable of all.

The post-Abramovich era is heralding a sea change in Thomas Tuchel’s squad — Lukaku has been packed off on loan and half of the club’s defenders are either going or gone.

Raheem Sterling’s move to Stamford Bridge is perhaps the most fascinating of the summer — and Pep Guardiola’s decision to sell a key player to a ‘rival’ is a potential mis-step from the Catalan.

Defender Kalidou Koulibaly is another intriguing signing — not least because no player in history has ever been linked with moves to the Premier League for so long before finally arriving here.

But Tuchel’s frank admission, after that Stateside hammering by Arsenal, that he cannot guarantee Chelsea’s readiness for the season, and that many of his squad are not showing sufficient commitment, was a stark warning.

Not many managers last long after a regime change, even those as good as Tuchel. And so a smooth season at the Bridge looks unlikely.

So us Londoners will surely be looking north again for a title race this season.

In football as in life, there is precious little evidence of ‘levelling up’.

WE ALL enjoyed the inspirational words of England’s Lionesses, an eight-year-old girl going viral by dancing wildly after their semi-final victory and the family fun-day feeling of the final.

But the best thing about England’s triumph?

Ella Toone and Alessia Russo trying to read the note opposition coach Martina Voss-Tecklenburg had passed to her players.

Lucy Bronze wasting 27 seconds before taking a throw-in and goalscorers Toone and Chloe Kelly spending the final few minutes hogging the ball near the corner flag.

Good luck telling any of this lot to get back in the kitchen.

LOUIS ON THE MONEY

ERIK TEN HAG was warned by Louis van Gaal that he was joining a ‘commercial club not a football club’ when he took over at Manchester United.

And as everyone connected with United — from fans to the boardroom — bend over backwards not to offend the most commercially-viable footballer on Earth, when he has made it clear he wants to leave, it only confirms Van Gaal’s prognosis.

Cristiano Ronaldo headed home as soon as he was subbed at half-time during Sunday’s friendly against Rayo Vallecano, making Ten Hag look weak and stupid.

As the pre-season predictions roll in, you’ll struggle to find anyone believing United are even capable of making the top four.

They are an entertaining media circus but a footballing irrelevance.

LET’S not use the England women’s Euros glory as a stick to beat the men’s set-up.

As bad as the last round of Nations League fixtures were, Gareth Southgate is the most successful England men’s manager in half a century, leading the team to a World Cup semi-final and a Euros final.

And, unlike the paranoid air which surrounded the Three Lions for so long, Southgate’s team are a largely likable, decent bunch who consistently speak out on wider social issues.

To suggest otherwise is ludicrous.

LIKE every other Football League player, Doncaster midfielder Lee Tomlin would have spent the past month working his wotsits off.

He would have undergone a sweat-stained pre-season schedule to be fit and ready for last weekend’s big kick-off.

Then, on the opening day against Bradford, Tomlin received two yellow cards in 18 seconds for obstructing a free-kick and an outrageous dive.

I don’t know about you but I think this says something profound and beautiful about the human condition.

BEFORE his team out-played champions Manchester City, Jurgen Klopp claimed the Community Shield came too early for his players and should have been rescheduled.

Yeah, a Community Shield staged the weekend before the Premier League kicks off.

Looks like the entire world is ganging up against Liverpool again.