It was not the jaw-dropping solo efforts from his own half that fuelled former Ilkeston Town manager Kevin Wilson’s belief that Che Adams would rise from the seventh tier of English football to the Premier League.

Nor was it the man-of-the-match performances as a 16-year-old in friendly games against Sheffield United, Leicester City and Birmingham City.

It was, in fact, the commitment to travel by bus 60 miles up and down the M1 on a three-hour round trip for a wage of just £ 40 per week.

After a heart-rending release from Coventry City three years earlier, giving the game up was perhaps the easiest option for the current Southampton and Scotland striker – but Adams “was willing to put everything in” to reach the top.

“It’s a message to anyone,” former Chelsea and Northern Ireland striker Wilson tells BBC Scotland. “If you work hard enough and have the ability, someone will see it. You’ve got to give him massive credit for the way he stuck at it.

“When I watch him on Match of the Day, or see him play for Scotland, I always send a little text. He hasn’t disappointed me one bit.”

Nine years on, Adams’ career has ascended through England’s football pyramid to the summit, via international recognition and European Championship participation.

BBC Scotland charts the rise of the striker hoping to fire Scotland to a first World Cup in more than two decades.

‘I always believed he’d go to the top’

Wilson was watching a trial match at Leicester’s King Power Stadium when he first became aware of Adams, who was seeking an academy scholarship after spending a year at local club Oadby Town.

Seventh-tier Ilkeston, under the guidance of Wilson, had recently launched their academy and the youngster was viewed as the perfect fit. The only issue was he was simply too good.

Wilson had no choice but to rapidly integrate the teenager into the first-team set-up while the club arranged nearby accommodation.

“Very quickly we realized, wow … what a player,” he recalls. “We knew we had to make it work. At that level, there weren’t many who could get you off your seat. Even at that age, Che was capable of it.

“He was a maverick. Like you see now, he was strong and powerful, but he would just breeze past people. He needed a few kicks up the backside, but he always wanted to get better.

“I truly believed he would eventually play in the Premier League. I’m so pleased he’s proven me right.” 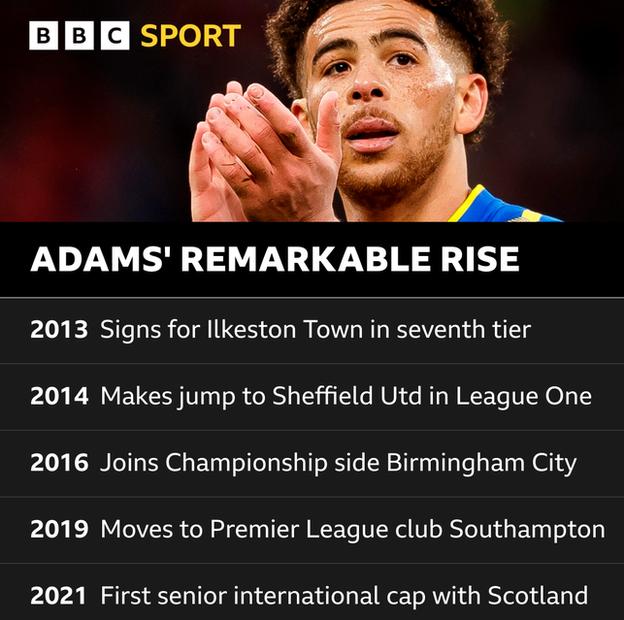 The Leicester forward’s name was one Wilson would hear constantly from agents and scouts as the England international’s stock rose at Halifax Town prior to his move to Fleetwood Town in 2011.

But now Ilkeston’s own prodigy was causing quite the stir – and clubs were determined not to miss out on the next non-league gem.

“We had 42 agents and 60-odd scouts watching Che one Monday night,” Wilson says. “Huddersfield and Peterborough sat down with us, both were really interested.

“But after Che spoke to Nigel Clough at Sheffield United on the Wednesday afternoon, he was up there on the Thursday to sign. Everything has fallen into place since.”

Among those keeping a watchful eye was Harry Redknapp, then manager of Queens Park Rangers. But by the time he was ready to make his move, the ink on Adams’ signature was already drying at Bramall Lane.

Two months later, Redknapp realized what he had missed out on when he watched his former side, Tottenham, get a scare from the Blades in the second leg of the 2015 League Cup semi-final.

Adams netted his first goals for the Yorkshire club, bagging a double off the bench in a stunning 15-minute cameo against Mauricio Pochettino’s men, who edged through 3-2 on aggregate.

“I always liked Che as a player,” Redknapp tells BBC Scotland. “I remember watching him in that semi-final and he absolutely ran that Spurs defense ragged.”

‘Without Che, we were down’

After two years at Bramall Lane, Adams made a £ 2m move in summer 2016 to Birmingham City, where Redknapp got the chance to work with the forward at the end of his first season.

With the team fighting relegation, Redknapp was drafted in to secure Championship survival – and did so after earning two wins in Birmingham’s final three matches.

“Che got sent off in my second game against Huddersfield,” Redknapp says. “We still won 2-0 then got his red card overturned after an appeal.

“He came back for the final game away to Bristol City and scored the winner that kept us up. Without that goal, we were down. He was such a good all-round player but also a great kid off the pitch.”

Redknapp’s stay lasted just five months, but even with disarray in the boardroom and the team struggling on the pitch, Adams was flourishing.

Thirty-one goals over the next two seasons had top-flight clubs on high alert and in swooped Southampton with a reported £ 15m bid to offer a gateway to the Premier League.

“He was still a young player,” former Birmingham and Rangers forward Greg Stewart tells BBC Scotland. “But you could just see with his attributes that he was always going to go to the Premier League for a lot of money.”

Top-flight transition did not go as hoped for Adams, however. After 27 games, the striker was yet to open his account.

But the Premier League’s shutdown because of Covid-19 was a blessing in disguise. He recharged and refocused during the three-month break.

“It helped me a lot, coming away from football for a bit,” Adams told Southampton’s website. “It was just realizing what I had to do right and what I was doing wrong.

“I was working on my fitness and other aspects of my game – conditioning to run harder, work harder and play smarter. I can not say it was a nice time, but for me it was probably the right thing.”

That form prompted Scotland boss Steve Clarke to tempt Adams, who turned down an approach from the Scottish FA two years prior, to join the national team.

With Euro 2020 on the horizon, Adams – who qualifies for Scotland through his grandmother – was keen to quash the notion that the upcoming finals were the only factor in his decision to commit allegiance.

The 25-year-old has since done his talking on the pitch, netting four goals and laying on two assists in just 15 caps.

But the Leicester-born player now has the chance to forever endear himself to the Tartan Army by helping Scotland to a first World Cup since 1998, starting with a play-off semi-final against Ukraine on Wednesday – with the winners facing Wales in the final four days later.

Two victories would complete Adams’ leap from England’s seventh tier to the World Cup – and he’s taking it all in his stride.

“You do not hear many stories like me,” he told former England striker Peter Crouch for BBC’s Year-Late Euros. “Loads of people ask me about it – but I’m just living it day by day.”