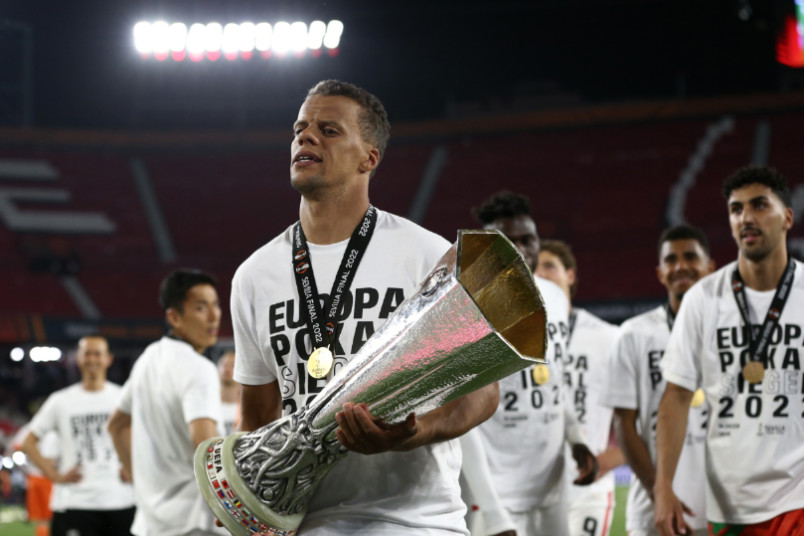 By J Hutcherson (May 31, 2022) US Soccer Players – If there’s a big picture takeaway from the 2021-22 season in European club soccer, it might be an overreaching awareness of change. UEFA debuted the new Europa Conference League and late in the season confirmed the Champions League revamp for 2024-25. What is now the upcoming season has to manage a November / December World Cup. A FIFPro survey has made it clear that the number of games has increased the workload on players to levels that they believe need addressing from soccer’s governing bodies. Add to that the financial situations clubs face from the elite to the lower divisions.

Eventually, European club soccer will change. That’s the message on repeat that becomes tougher to ignore. It’s no small thing to ask where the supporters fit in with all of this, as the focus tends to shift to the biggest clubs as global brands as much as representing the home fans.

Of course, what drives soccer across Europe is the game at the highest level. Real Madrid got to lift the elite of Europe’s favorite trophy for the 14th time, beating Liverpool 1-0 in the Champions League final. They weren’t a favorite at the start of the season based on a lack of big money transfer deals and needing to rework their defense. Ultimately, Real Madrid turned into the likeliest team to upset a contender en route to lifting the European Cup. How much weight anybody should put on Real Madrid as underdog was worth asking early and often, a team that won its Champions League group by five points and eventually won La Liga by 13 points. Real Madrid held two celebrations this season, underlining who they are in changing times.

“During the games against Paris, Chelsea, Man City there was a lot of doubt,” Real Madrid coach Carlos Ancelotti said after the final. “Today the game was difficult, but there was no comeback required. The players never doubted at any minute they wouldn’t win this competition. “

Meanwhile, Liverpool chased Manchester City to the final day of the Premier League season finishing in 2nd-place by a point. Liverpool had already won both domestic cups, once again asking an important question about success over the course of the season for English clubs. Liverpool underlined that by holding a public celebration for its League Cup and FA Cup wins the day after the Champions League final.

“I was not sure what we could expect,” Liverpool manager Jurgen Klopp said about celebrating the domestic cups. “We talked about it before, ‘What do we do?’ You have to plan this kind of thing. You can not just decide to have a parade. But I hoped that we find something like this, it is absolutely incredible. ”

That feeling of celebrating wins was on display in Frankfurt after Eintracht won the Europa League. Eintracht’s embrace of the tournament was easy, considering who they had to beat to reach the final. Barcelona in the quarterfinals and West Ham United in the semifinals were tough assignments for a club that ultimately finished 11th in the Bundesliga. Beating Rangers in the final meant Eintracht qualifies for the group stage of the 2022-23 Champions League.

While that’s the carrot to treat the Europa League knockout rounds seriously, it’s also not the whole point from what we saw from Eintracht’s players and supporters. The importance was winning this trophy right now with this group of players, regardless of what happens next season.

“There are no words to describe this,” Eintracht’s Kevin Trapp said following the final. “We’ve won Eintracht’s first European trophy in 42 years… This is the best moment of my career. There’s so much pride – we’ve made a whole lot of proud people…. We had the overwhelming impression that we were going to win, and that that was just the way it was going to be. After the dramatic loss to Chelsea three years ago and all of our Europa League performances this season, we’ve earned this. We’ve got what we deserved. “

AS Roma lifted the first Europa Conference League trophy, a tournament that the club embraced as they progressed. It was not straightforward for one of the biggest names in the field. Roma had issues with Bodo / Glimt, losing away and eventually finishing a point ahead of them in group C. After Roma knocked out Vitesse Arnhem, it was Bodo / Glimt again in the quarterfinals. Once again, they lost in Norway before taking the series with a 4-0 home win. That setup a semifinal they won 2-1 on aggregate over Leicester City. Roma beat Feyenoord 1-0 in the final in Albania, with the home support watching back at Rome’s Stadio Olimpico invading the pitch.

“Winning is very difficult,” Roma coach Jose Mourinho said. “You need many ingredients. Our team has played 55 games. We reached the final being tired, but we kept it hidden. This is a fantastic group of players. That makes me emotional. ”

There’s a way of looking at the 2021-22 European club tournaments as about emotion. While putting full focus on the Champions League is a given, teams with plenty of history were going all-in on the Europa League and the Europa Conference League. They made all three levels of Europe matter. That’s another example of the power the supporters hold, choosing to celebrate what they decide is worth celebrating.

J Hutcherson started covering soccer in 1999 and has worked as the general manager of the US National Soccer Team Players Association since 2002. Contact him at jhutcherson@usnstpa.com.