Ahead of the start of the 60th Bundesliga campaign on Friday night, Kicker magazine put ten (!) contenders for winning the trophy on its cover. The badges of Bayern Munich, Borussia Dortmund and RB Leipzig feature, of course, but so do Bayer Leverkusen, Union Berlin, 1. FC Koln, TSG Hoffenheim, Borussia Monchengladbach, VfL Wolfsburg and… Werder Bremen. And why shouldn’t they? It’s an irrefutable fact that the departure of Robert Lewandowski has opened up the field in Germany’s top flight like never before. For the first time in its history, the league will neither see the incumbent nor a former trophy winner in action.

So yes, somebody new will lift silverware come next May, guaranteed. And no, you haven’t accidentally stumbled into a Bundesliga remix metaverse in which mid-table stalwarts Hoffenheim slug it out with newly-promoted Werder for the No 1 spot. Kicker’s story, as you’ve probably guessed by now, is not about the championship but the quest for the Torjagerkanone, the little wooden and metal, Arsenal logo-style gun handed to the leading goalscorer of the season.

With Lewandowski and Erling Haaland out of the way and Nagelsmann opting for a more collective approach to goalscoring with the German champions, it really could be anyone’s in 2022-23, maybe even Bremen’s Niclas Fullkrug. (The other hopefuls pictured are Sadio Mane, Karim Adeyemi, Patrik Schick, Christopher Nkunku, Jordan Siebatcheu, Andre Kramaric, Anthony Modeste, Marcus Thuram and Lukas Nmecha.) 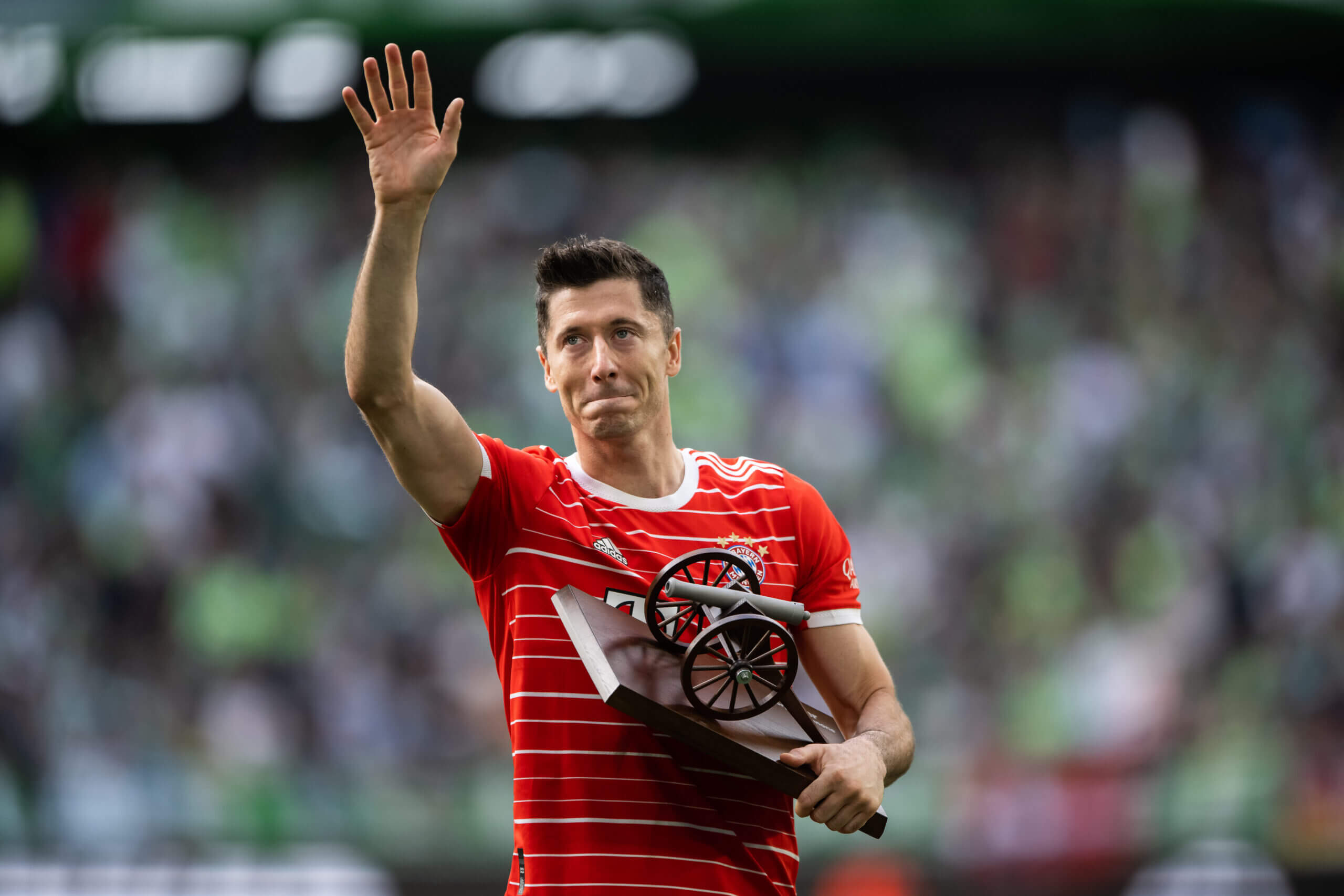 Lewndowski has departed, leaving an open race to be top gun this season (Getty Images)

It’s telling that Germany’s most important football magazine chose this rather niche angle for their curtain-raiser coverage. This season does undeniably promise plenty of excitement and interest for supporters from every single club but if it’s a real race for the title you want, you’d better hope that the entire Bayern team will follow their Polish ex-goalgetter out of the door before the end of the transfer window.

Barring that unlikely event, it’s hard to dream up a scenario in which a squad that’s become deeper and better than in previous years will not deliver an 11th consecutive Meisterschale. It would probably take a complete breakdown in relations between Nagelsmann and the team for Bayern to stop themselves from indulging in another mass beer shower on match day 34, and even that might not be enough: the notoriously interventionist board would just go and quickly replace the 35-year-old with a caretaker, in time to save the day. That’s what happened when Carlo Ancelotti (Jupp Heynckes) and Niko Kovac (Hansi Flick) were both fired early in their second seasons in 2017 and 2019, respectively.

Nagelsmann is under more pressure this year, having failed to deliver beyond the championship and quirky social media clips. But just like his superiors, he seems to have learned important lessons from last year’s relative failure. In the press conference before Friday night’s opener away to Europa League winners Eintracht Frankfurt, he volunteered that the team had asked him for a more fixed identity, with fewer adjustments to opponents’ strength. A Guardiola-esque micro-tweaker by nature, Nagelsmann is clearly willing to listen and to curb his penchant for overengineering. Bosses at Sabenerstrasse are optimistic that he will mature further and grow into his role in the coming months.

Borussia Dortmund, meanwhile, will do well to reduce last season’s eight-point gap behind the perennial winners. The return of 2020 DFB Pokal winner Edin Terzic as manager has created real positive momentum, and deals to bring in Germany internationals Niklas Sule and Nico Schlotterbeck will undoubtedly strengthen their pretty shoddy defense.

There’s a lot of excitement about English teenage sensation Jamie Bynoe-Gittens, a winger, new midfield enforcer Salih Ozcan and Germany striker Karim Adeyemi (bought from RB Salzburg). Unfortunately though, they haven’t been able to strengthen in the full-back positions. Money was too tight to sign €30million (£35.3m, $30.75m) left-back David Raum from TSG Hoffenheim, he went to RB Leipzig instead. The 24-year-old half-jokingly declared himself “the most important signing in the Bundesliga” at his unveiling this week. He’d been more accurate if BVB had secured his services.

The most important transfer for Dortmund this summer might well be the one they’re most unhappy to execute. Ex-Ajax forward Sebastian Haller was supposed to be the main man up front following Haaland’s sale to Manchester City but the French-Ivorian was sadly diagnosed with testicular cancer before seeing any action. While everyone’s naturally most concerned with the 28-year-old making a full recovery, BVB needs to compensate for his absence with a short-term replacement that’s not too expensive. The club is expected to present a solution within the next few days, but Haller’s illness has, understandably, gravely affected the mood at Signal Iduna Park.

Right now, cup winners Leipzig would look better placed to finish as the best of the rest. RB have managed to keep Germany’s player of the year Nkunku for another season, added Raum and defensive midfielder Xaver Schlager. There’s a good chance manager Domenico Tedesco can also welcome back Timo Werner: the Germany international is very keen for regular game time in familiar surroundings before the World Cup. Central midfield looks a little light, conversely, especially if they were to lose Konrad Laimer after selling Tyler Adams to Leeds United. But theirs is a quality squad that should also do quite well in the Champions League.

Last season’s fourth-placed side Bayer 04 Leverkusen have had a relatively quiet transfer window. Czech striker Adam Hlozek is the only big name addition but they haven’t lost a key player either. Gerardo Seoane’s side will have to cope with the dual demands of Europe’s top competition and the league before they entertain thoughts of challenging Bayern in any sense.

Frankfurt, glorious winners of the Europa League and thus the Bundesliga’s fifth participants in the Champions League, have already provided one of this season’s feel-good stories by bringing back World Cup hero Mario Gotze from a stint in exile at PSV Eindhoven. It’s rare to see a player’s arrival greeted with almost universal approval, there really can’t be many who wouldn’t like to see the 30-year-old do well upon his return.

“It’s good to have him back,” former Frankfurt icon Jay-Jay Okocha told The Athletic this week. “He’s coming back as a more experienced player who has played abroad. I’m looking forward to seeing how he’ll drive this Frankfurt team to more success. He’s coming back as a fresh player with something to prove and I think he’ll cherish the opportunity that’s been given to him — not just by a team in the Bundesliga, but in the Champions League too.”

Nor ever, it’s incredibly hard to predict the fate of roughly half the teams competing in this division. VfL Wolfsburg (under new management in Niko Kovac), Union Berlin, SC Freiburg (both in the Europa League), Koln (Conference League), Mainz 05, Hoffenheim, Stuttgart, Hertha and FC Augsburg (with highly-rated Enrico Maassen in charge ) could either be in the mix for Europe or worry about relegation.

It’s that two-way permeability that puts bums on seats, as well as a sense of spectacle and escapism that will be even more needed than usual this year. It feels as if the anticipation is bigger than usual, too: there’s much euphoria about a first season of full stadiums after COVID-19 and a more “meaningful” match schedule, now that well-supported Schalke 04 and Bremen are gracing us with their presence again. Both clubs quickly sold out of season tickets despite facing a relegation fight, which just goes to show that German fans’ love for their team remains largely unconditional.

The same, ultimately, goes for the league as a whole. As much as everybody would cherish a real title race, let alone more superstar clubs that are the envy of the world, the Bundesliga still does a pretty good job of fulfilling the core needs of their constituents at home.

Winning is complementary to that communal experience, but not existential (outside of Munich). That’s why, for all the hand-wringing about Bayern destroying the competition and modern football selling its soul, the Bundesliga will remain the country’s most important cultural constant for decades to come — whether international audiences tune in or not.