When Pep Guardiola arrived at Manchester City in 2016, it felt as if Sergio Aguero’s days were numbered.

Guardiola, the theory went, would surely not indulge the stocky goal poacher who did not train hard and did not press. When Gabriel Jesus – a futuristic pressing machine – joined City from Palmeiras in January 2017, it looked as if Aguero was already being replaced. Within a few days, Jesus was starting up front and Aguero was on the bench.

Fast forward four and a half years to May 2021 and Guardiola was celebrating his third Premier League title with City. It was Aguero’s last game for City before moving to Barcelona. And Guardiola burst into tears when discussing Aguero’s contribution to his success. “We love him so much, he’s a special person for all of us,” Guardiola said. “We can not replace him, we can not.”

Across those few years, Aguero transformed himself from a player on the brink of being replaced to one who could never truly be replaced. He married his own natural style – specialized, ruthless, selfish – with Guardiola’s overarching conception of the game. The result was a new iteration of Aguero: as deadly as ever in front of goal, but more intelligent and integrated into the rest of the team than ever before. This was, until his knee injury in June 2020, the best and most complete Aguero that City ever saw. And his four-goal display against Leicester City in February 2018 was as good as anything he produced.

We should be honest about what this was not. This was not a heroic performance against the odds (City were 1/4 with the bookmakers to win before kick-off). This was not a high-stakes, title-race nail-biter (City went 16 points clear of Manchester United by winning). This was not a turning point for Aguero, either (he had scored nine in his last nine coming into this game). This was not even the most interesting game of the weekend: Jose Mourinho’s United lost 1-0 at Newcastle the following day.

Aguero had plenty of more famous goals and games than this at City. At the top, there is, of course, Queens Park Rangers in May 2012, one of the most important goals of modern English football history. After that, well, it depends on what you were looking for. If you want importance to a title race, there was Burnley and Brighton away in 2019. If you want individual brilliance, there was Tottenham Hotspur away in 2011 or Old Trafford in 2013. If you want a mix of both – high quality, high importance – there is Norwich away in 2012, Liverpool at home in 2019. If you want a moment that roots Aguero’s importance in City history, there is Napoli in 2017.

So with all these other more obvious options to choose from, why go for this routine home demolition job? Why pick out something that feels akin to flat-track bullying, or even, to use the modern language, “stat-padding”? Why not go for something more exciting, more challenging, more dramatic, more competitive?

Well, because this was still something special in itself: a great player just within his physical peak, but smarter than ever before. He was as deadly in front of goal as ever, still retaining all that muscular power, still a few months shy of his 30th birthday. But this was also an Aguero who had expanded his game so that he could fit in with Guardiola’s style of play. An Aguero who could press from the front just as well as Raheem Sterling and Bernardo Silva, playing either side of him in City’s front three. Maybe the Aguero who played under Roberto Mancini and Manuel Pellegrini was more explosive, but the Aguero who played for Guardiola was more complete. And there was no more complete performance than this one against Leicester. 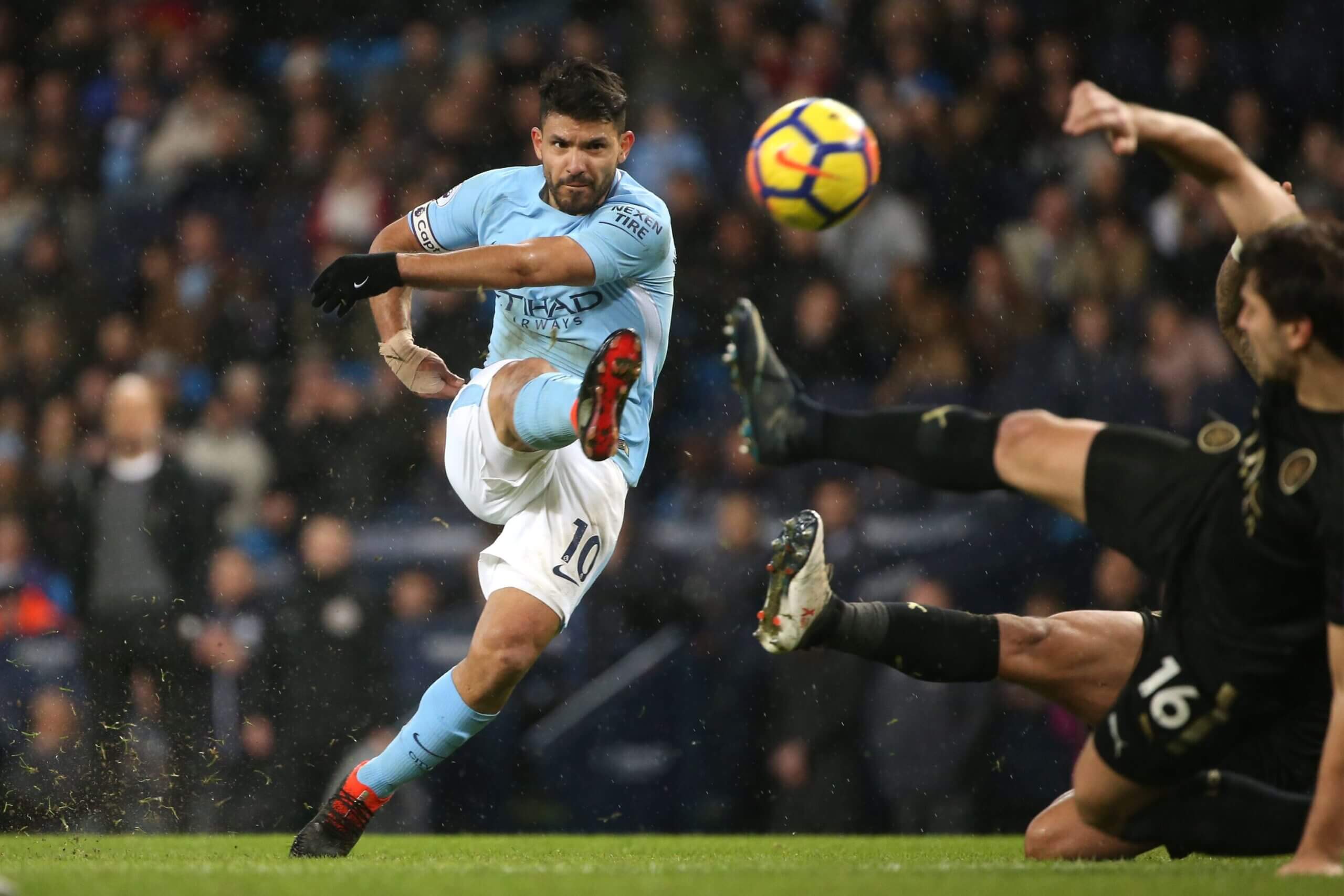 It all started with a goal that looked so deceptively easy that it could only have been scored by a master poacher. (This was at the start of the second half, with the game balanced at 1-1, just when you might think Leicester would dig in and try to frustrate City.) But when Kevin De Bruyne had the ball out on the left, Aguero was able to make a simple forward run in between Harry Maguire and Christian Fuchs towards the goal. Even with his arm raised to indicate to De Bruyne – and everyone else – exactly what he planned to do.

How exactly Aguero managed to avoid detection is a mystery. He was not exactly an unknown quantity at this point – this was his 140th Premier League goal. And yet Maguire and Fuchs looked bizarrely complacent as Aguero, one of the best strikers of his generation, just ghosted straight through them and rolled the ball into the net.

This is one of the gifts that great poachers have, a capacity for undetectability. So much of what made Aguero great was very obvious – the burst of pace, the powerful shot – but there was subtlety too, such as that stealthiness in the box. No other City striker in the last few years has had that, and although Jesus has many strengths as a player, he has never been able to compete with Aguero’s poaching instincts. Even Erling Haaland, as exciting as he is in his own way, does not have this.

If the first goal was a poacher’s classic, the second goal stood out for including elements of new Aguero and traditional Aguero. The first part is all about pressing. It started with Kyle Walker, in his first season at City, charging forward to put pressure on Maguire. He passed back to Kasper Schmeichel and Aguero pressed him to try to force a mistake. Schmeichel rushed his kick, chipped it into the air, and it was plucked out of the air by Fernandinho. That Aguero did this, forcing a turnover of possession, is proof of how he had learned from Guardiola, who initially had concerns about Aguero’s work off the ball.

Fernandinho passed to De Bruyne, who found Aguero just inside the box, in the huge gap between Maguire and Aleksandar Dragovic. Aguero took the first touch with his right, moving the ball out into a shooting position to the right of goal. He then smashed the ball hard and early towards the post, and after hitting Schmeichel on the way, it went in for his second.

What made the finish so perfectly Aguero is that it was a carbon copy of his most famous goal of all, the winner against QPR almost six years before. Not only was it scored at the same end, but the pattern of the two goals was identical. His shot against Leicester was maybe from one yard wider, a few yards from the right-hand corner of the six-yard box. Against Leicester, he took one extra touch, and the dividing slide from Dragovic came neither he shot, and not, as Taye Taiwo’s did, just before.

But it was impossible not to have a sense of deja vu watching the Leicester goal, especially for those with the QPR winner imprinted upon their minds. The same sense for space, the same early, powerful shot, the same way he leaves the ground on contact and then falls away to his right, stumbling off the pitch before wheeling off in celebration. (This time the celebrations were less riotous, and this time his shirt stayed on.) But then this is itself another mark of Aguero’s brilliance, the consistent repeatability of the very difficult things that he did.

So that was two goals for Aguero and the third was even better. Again, it started with Aguero pressing from the front, doing what it was once assumed to be beyond him. When Maguire passed to Schmeichel he was immediately under pressure from Silva and Aguero. Schmeichel, perhaps panicked by the last time he tried to kick long, tried a short first-time pass to Dragovic. But the ball went straight to Aguero instead. From there, the old instincts took over: his first touch was perfect, knocking the ball out in front of his path, he lengthened his strides to meet it, and got there soon enough that he was able to get the ball up and over Schmeichel to complete his hat-trick. It was his eighth Premier League hat-trick (and he still managed another four after this.)

Three goals of increasing quality then, all scored within 29 minutes, with the climax still to come. It was the last minute of the game and City were 4-1 up. Phil Foden passed the ball to Aguero in space, 25 yards out from goal. He took a touch out to set himself and then thumped the ball as hard as he possibly could towards goal. It flew straight over Schmeichel’s head before he could move his tired arms to get there, hit the underside of the bar, cannoned back down inside the goal, and back up again into the roof of the net.

Aguero’s shooting power is no surprise – just look at how hard he hit his second goal – but the vast majority of his goals for City came inside the penalty area. The few that he scored from this far out stand out (remember his debut against Swansea City in 2011). He was a penalty-box player, ultimately, or in his younger years someone who would run in behind the opposition defense. He was not someone to drop this far from goal and test out the goalkeeper. But maybe this time, having already scored three, he wanted to try something different.

Even this four-goal haul was nothing unique in the context of Aguero’s own career. He scored four against Tottenham in 2014 and then got five against Newcastle the following year. But that was the first phase of Aguero’s time, pre-Guardiola, when he could happily play his natural game. This performance was perhaps the peak of Guardiola-era Aguero, his final form as a top player, and his most complete one.