Paul Ince spoke like a head coach acutely aware that his Reading side had been given the run around by Sunderland on Wednesday night. “They looked like they were Barcelona against us,” he said in the aftermath of a juddering 3-0 Championship defeat.

It is the hackneyed football cliche; as much a manager lamenting his own team’s shortcomings as lavishing praise upon an opponent.

But Ince was not wrong. Sunderland really DoJ play football typically reserved for the elite in their clinical dismantling of Reading.

On a night when most of Europe was left to drool over Erling Haaland’s acrobatic late winner for Manchester City against Borussia Dortmund in the Champions League, Sunderland had already scored a better goal to wrap up their own, less-heralded victory.

Sunderland went from back to front within 18 slick seconds that brought just 12 touches. Eight players had a contribution before Clarke finished in a style befitting all that had gone before.

WOW!! How about this for a team goal. Superb football from Sunderland. ⚽ pic.twitter.com/v6rxJNF9Uw

“A brilliant move,” said Tony Mowbray, who was taking charge of only his third Sunderland game. Don Goodman, the ex-Sunderland forward, went that little bit further. “Just watch it, enjoy it because it’s absolute perfection,” he told viewers during his commentary for Sky Sports.

This is a Sunderland team that continues to impress in the months following victory in the League One play-off final. Even without Ross Stewart and now Ellis Simms, the club’s only recognized centre-forwards who were lost to injuries in the last 10 days (the latter was forced off during the Reading victory), and no longer led by their promotion-winning boss Alex Neil , Sunderland are showing themselves to be a dangerous proposition in the Championship.

Reading, who missed the chance to move third in the table, can testify to that after being left dizzy by the visitors’ attacking play.

And that third goal is particularly worthy of dissection.

It all starts with the simplest of passes from goalkeeper Anthony Patterson. There will be no punting it long under Mowbray — instead it was a short ball to Luke O’Nien, one of Sunderland’s three central defenders on the night. 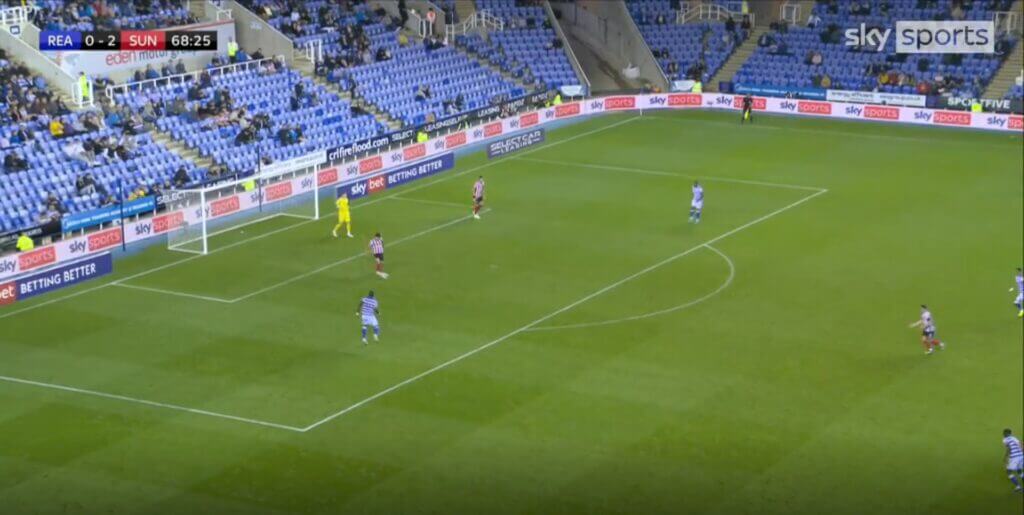 Captain Corry Evans has already shown himself, dropping deep between Reading’s advanced forward line and midfield. He takes one touch to control and another to find right wing-back Lynden Gooch close to the byline. 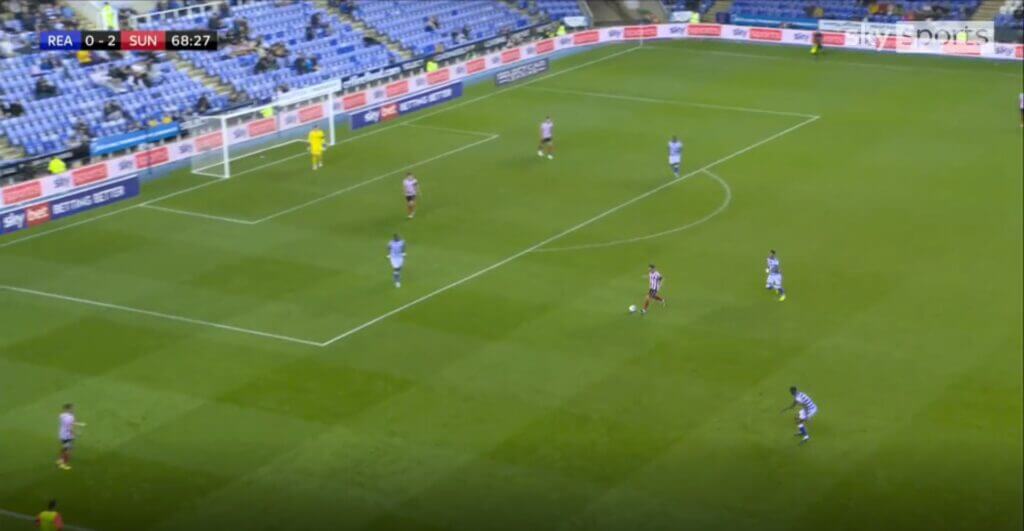 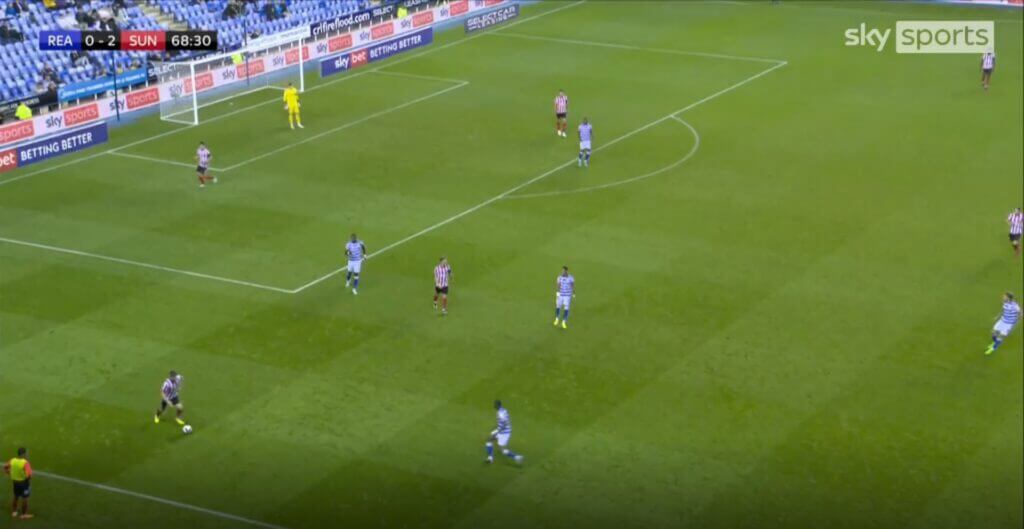 And this is where things suddenly spring to life.

A simple ball down the line finds England Under-20s midfielder Dan Neil, who instinctively flicks the ball around the corner and 10 yards on to Roberts. 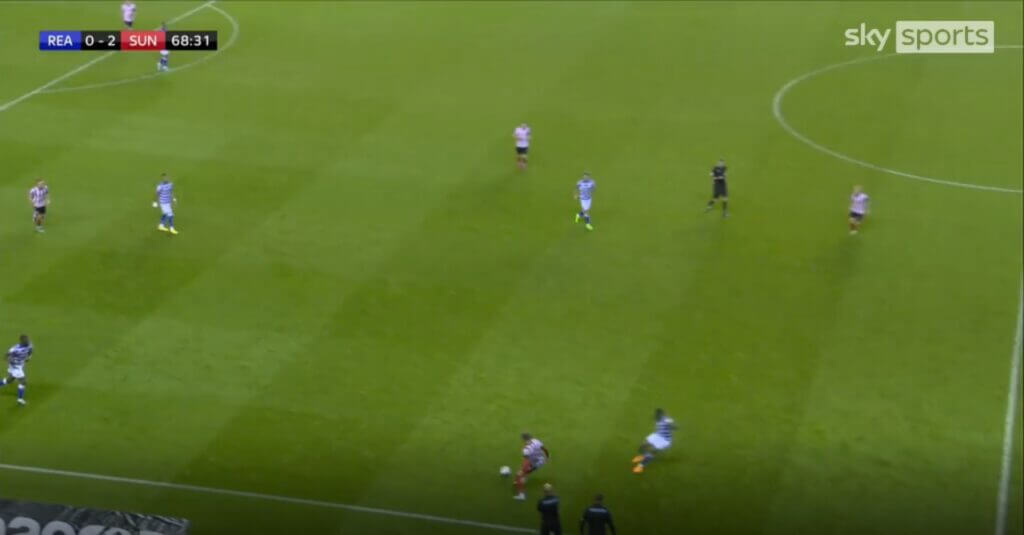 Then comes the most sumptuous touch of all. Roberts, playing with tail up after his two goals, has dropped deep to collect from Neil and a clever touch off his heel instinctively finds Alex Pritchard inside. It is worth keeping an eye on Neil at the bottom of this next image. 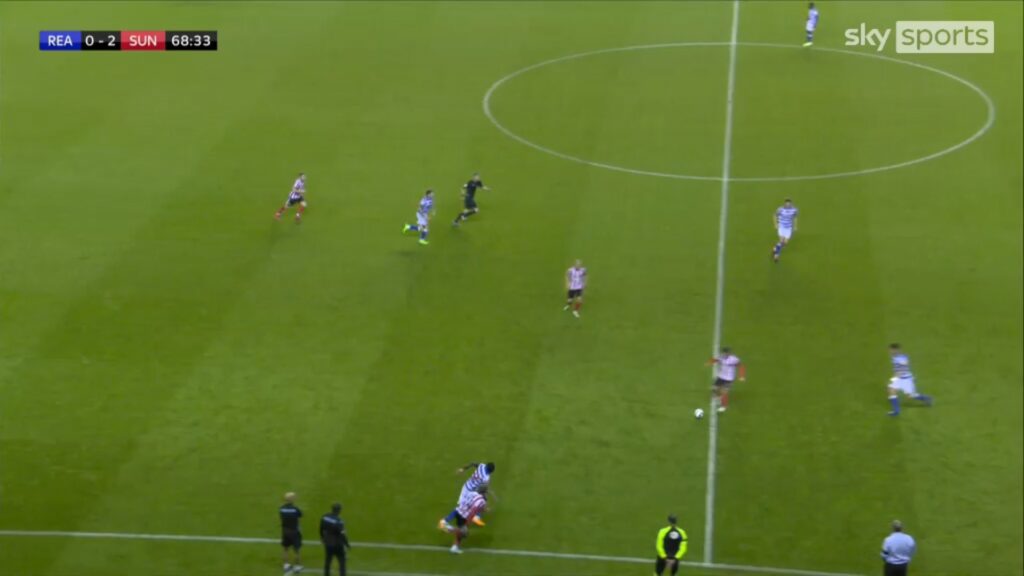 It has been tight and congested up to that point, with Reading defenders attempting to press, but Pritchard’s first-time ball carves everything open. 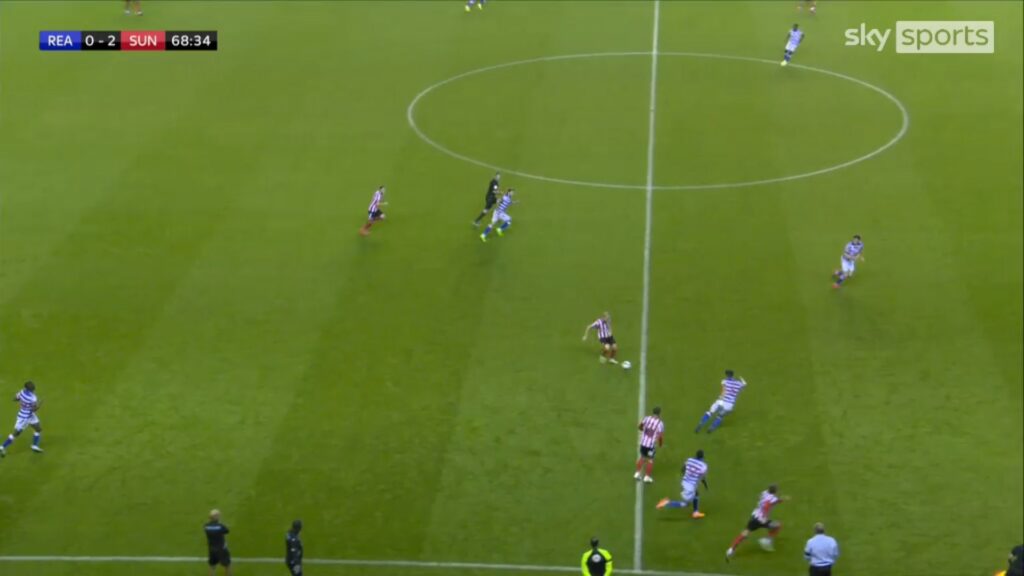 Neil, whose flick had really greased the wheels of this move, has continued his run down the right flank. Defender Baba Rahman has not been quick enough to react and can only trail in Neil’s wake as the midfielder eyes up what might come next. 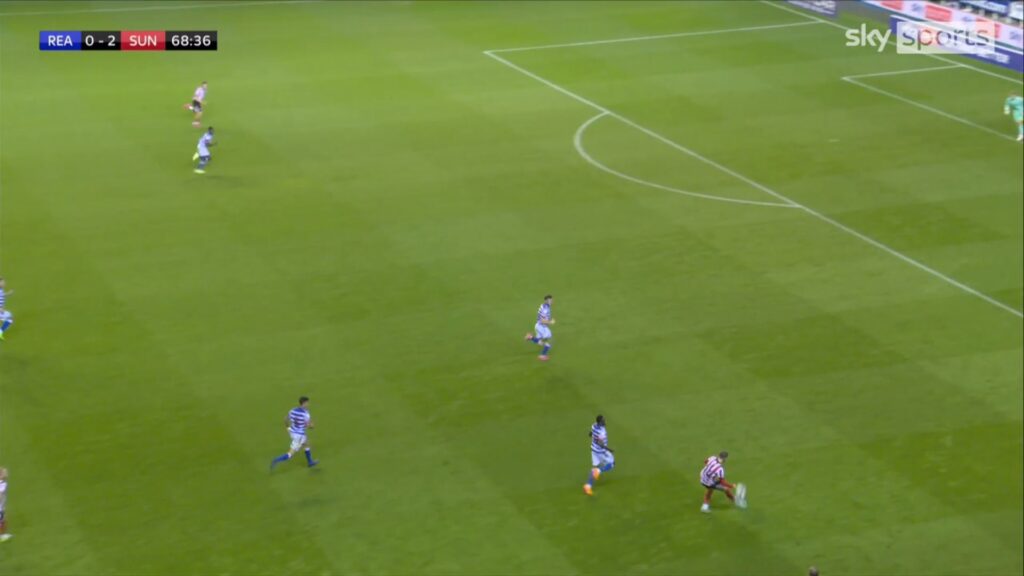 Neil has already picked his curling 40-yard pass before he has got to the ball. Clarke has been spotted advancing up from his left wing-back position and beyond the back-tracking Yakou Meite. The ball is pitched into Clarke’s path but it still requires a calm head for the coup de grace. 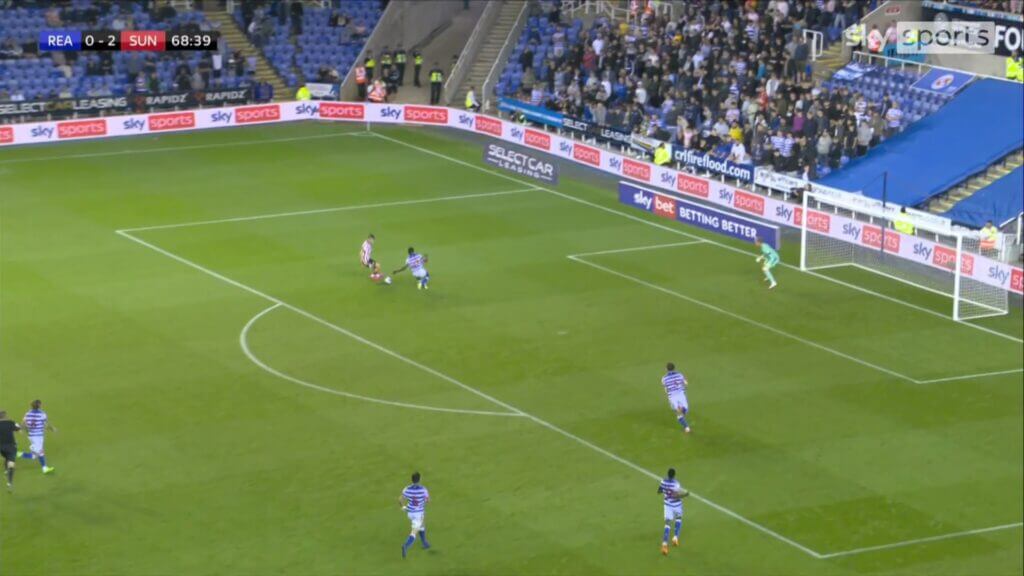 The off-balance Meite is taken out of the game with one touch inside, opening up the entire goal for Clarke to strike confidently into the bottom corner. 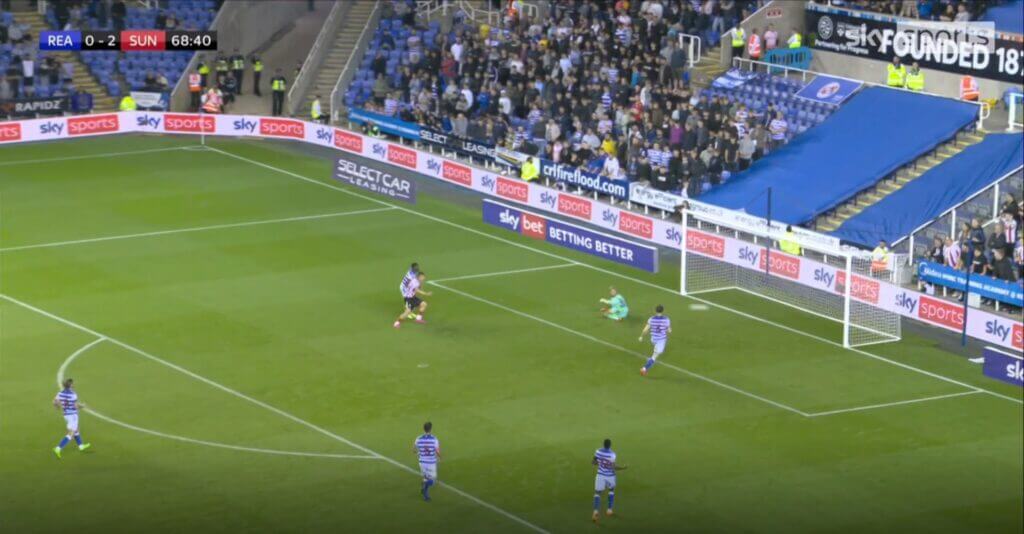 The wrong-footed Joe Lumley is left exposed and without a hope of saving Reading.

Clarke really ought to have made it 4-0 soon after, released one-on-one by the on-loan Manchester United rookie Amad, but picking fault on a night like this was futile.

“They’re enjoying playing football,” said Mowbray, whose reign as Sunderland boss is only in its third week. “They’re good footballers, and it’s good to work with good footballers because you don’t have to tell them every pass. They see the passes and get turned on their first touch, they let the ball run across their body and play around the corner. I know in my career I’ve had to spend a lot of time repeating the things that a lot of these lads do naturally.”

Without Stewart for at least another six weeks and Simms for an unspecified period, this is all that Sunderland are as an attacking unit. There is very little power or physicality left but they are diminutive, tricky and, perhaps most importantly for a squad purposely littered with youngsters, growing in confidence.

Both Paul Heckingbottom and Chris Wilder, managers of Sheffield United and Middlesbrough, have called Sunderland fearless this season and although they are a long way from the finished article, with consistency not yet demonstrated in the Championship, they are certainly making themselves known in the season’s first quarter.

Barca have left Berkshire. Next stop, Watford on Saturday.