It’s pretty much slap bang in the middle of summer, so maybe it’s an impromptu BBQ in the park? Retire to a beer garden safe in the knowledge that Thursday is the new Friday? Buy the kids a tub of ice cream so that everyone may cope with the intolerable heat?

They’re all options if you’re not involved in football. If you are involved in football, there’s every chance that you’ll be running around screaming, trying to get things done, because this year June 30 feels like it’s the date around which the next season pivots.

It’s a date that could significantly impact the short- and medium-term futures of Barcelona, ​​Manchester United, Atletico Madrid and half the other teams in Spain, Paris Saint-Germain and Neymar, Everton, and a large number of clubs in the EFL. So not much, then.

Let’s start with Barcelona. Their financial mess has been well documented, with Joan Laporta and the rest of the board trying to come up with increasingly creative ways to allow the club to operate under the crushing weight of their € 1.3 billion debt.

June 30 looms so large because that day represents the end of their financial year, the outcome of which will determine the salary cap that La Liga will impose on them when they make their own calculations, due on July 31.

So Barcelona need money, and fast. That could come through a variety of creative ways, including the “financial levers” that Laporta asked the club’s members to pull earlier this month. This would either involve selling around half of Barca Licensing and Merchandising, the company that controls large portions of their commercial operations, or selling a maximum of 25 per cent of their future TV revenues.

To a layman, even with the knowledge that they need quick cash, selling long-term revenue for a short-term cash injection sounds risky at best. “There are elements of payday loans about all this,” says Kieran Maguire, football finance expert and host of the Price Of Football podcast. “It’s a short-term solution with a long financial tail.”

At the time of writing, no such sale has been confirmed, but Laporta and the Barcelona board will push hard to bring in something before the clock strikes midnight on the 30th.

Again, to a layman, a much more sensible option would be to simply reduce their outgoings by selling some players, then crucially not bring in other, potentially even more expensive players. That’s why their pursuit of Robert Lewandowski feels so strange, but this is Barcelona: they have to feel like they are still competing, still glamorous, still able to attract top stars, even though in reality they barely have two pesetas to rub together.

And in fairness, they’re doing this too, as anyone who is following the torturous Frenkie de Jong saga will attest. The current mood music seems to be that Barca and Manchester United have broadly agreed a fee of £ 56 million plus add-ons, but Barcelona’s need to raise funds by June 30 hangs over the whole thing.

Barcelona aren’t the only Spanish club approaching financial D-day. Atletico Madrid CEO Miguel Angel Gil said this week that his club need to raise € 40 million by June 30 or they will also register a loss over the year. If that happens, La Liga’s rules mean they would only be able to spend one euro for every three they raise.

Valencia also have to sell, with Carlos Soler and Goncalo Guedes the most likely departures. Sevilla have already sold Diego Carlos to Aston Villa, which at least gave them enough breathing room that they don’t have to ship out Jules Kounde for less than he’s worth. Espanyol could do with finding € 25 million, and Celta, Alaves, Real Sociedad and Real Betis are among the other clubs operating a transfer yard sale to meet La Liga’s deadline.

There’s a similar, if rather less drastic, situation in England. Like in Spain, June represents the end of the financial year for several clubs, and the Premier League side for whom there seems to be most at stake is Everton.

“The finances of Premier League clubs in the main, from a Financial Fair Play perspective, look quite healthy,” says Maguire. “But Everton are the closest club to FFP boundaries.”

The short and simple version is that it would be extremely helpful if they could sell someone by June 30. The full situation is much more nuanced than that, as Patrick Boyland and Greg O’Keeffe explain here, but since June 30 is also the end of the four-year (extended from the usual three to take the COVID-19 seasons into account) FFP cycle, this is their last chance to add incoming funds to their 2021-22 profit and loss calculations.

The easiest way to do this is to bring in a big fee for a big player, echoing what Crystal Palace did a few years ago. “Aaron Wan-Bissaka was sold to Manchester United on June 30, 2019,” says Maguire. “Palace had lost around £ 40 million that year, but by selling Wan-Bissaka on June 30 and not July 1, the £ 40 million loss turned into a £ 5 million profit.”

So who will go? Dominic Calvert-Lewin would be an attractive candidate, primarily because he was bought for £ 1.5 million in 2016 so his sale would represent “pure profit”, whereas the situation for a player who costs more is slightly more complex.

To use a hypothetical example, say Everton bought a player in 2018 for £ 25 million on a five-year contract. For financial reporting purposes. that fee would be amortised across his deal, meaning his “book value” decreases by £ 5 million every year. That player’s book value, having been there for four years, would be around. 5 million now. If they sold him for £ 15 million, they would therefore be able to “book” a profit of £ 10 million. But if they sold Calvert-Lewin for £ 50 million, almost all of that would go into their calculations.

However, an injury-blighted season means there’s a limited market for him. Elsewhere, Juventus have Moise Kean on a two-year loan with an obligation to buy in 2023, so why would they bring that forward just to suit Everton’s accounts? Tottenham are keen on Anthony Gordon but it would be a significant gamble – in many respects – to sell a homegrown youngster who, even with a new contract on the horizon, would not be among their highest earners.

All roads point to Richarlison, then. Tottenham and Chelsea are interested but the problem is that everyone now knows Everton need to sell, so aren’t minded to offer top dollar. The sense is that the most likely outcome will be the Brazilian’s departure, to whoever can pay on time, but that’s far from certain.

If Everton do not make this sale, the walls will not exactly come tumbling down, but they will be unable to make significant signings this summer and will, like last year, have to rely on free transfers, loans, loans with options to buy , loans with obligations to buy and any other creative option they can think of.

And then there’s Neymar. The man who remains the most expensive player in the history of football has felt less and less relevant over the last year: he is, at best, the third-most important player at his club, behind Lionel Messi and the world’s first striker / sporting director, Kylian Mbappe. 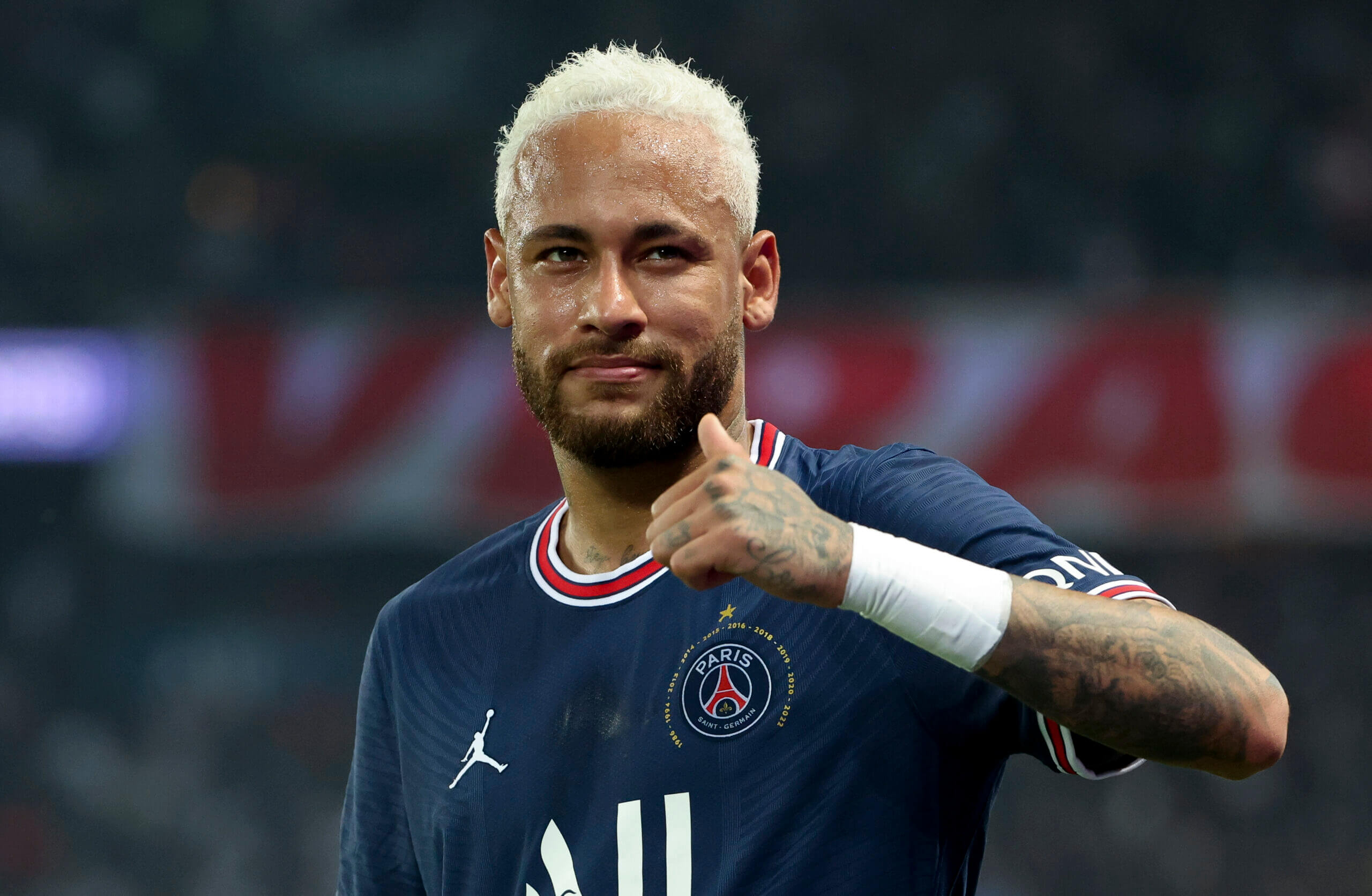 The next few days represent the last hope for PSG to move on Neymar (Photo: John Berry / Getty Images)

Nevertheless, the contract that he signed in the spring of 2021 – billed at the time as a three-year extension committing him to PSG until 2025 – was effectively a five-year extension. An extra year to the deal was triggered at the start of July 2021, and another year will come into effect at the start of July 2022, meaning his deal will now go to 2027.

Unless, that is, he leaves before that extension is triggered. Which would require someone else to take on his wages and, ideally, give PSG some sort of transfer fee. The suggestion is that they would be keen for him to find another club but unsurprisingly, there isn’t a colossal queue forming to sign a 30-year-old who is on colossal wages, missed 18 games last season with various ailments and wasn ‘ t exactly a world-beater when he was fit to play.

Sources have indicated to The Athletic that Neymar would like to return to Barcelona, ​​but even if they manage to get out from under their financial rubble, they have other priorities. There has been some speculative talk in the French media of Newcastle United, Chelsea or Manchester United being potential destinations, but Neymar has been pretty clear that he does not want to play in England.

“I expected all of the players to do more than last season,” said PSG president Nasser Al-Khelaifi last week, in theory talking about the whole squad, but you do not have to squint too hard to read between the lines. “Much more. The message is clear: working each day at 200 per cent. Those who want to stay in their comfort zone will stay to one side. ”

Essentially, if you think he’s untransferable now, the additional time on his contract would make him absolutely, completely untransferable, a contract that will last until he’s 35. So these few days represent the last hope, for a few years at least, of moving on from the whole experiment. If not, he’ll stay at PSG and everyone will have to make the best of things.

All of these extraordinary events are on top of the usual frenzy of expiring contracts, which is a financial consideration for those clubs because many players are due bonuses at the end of their deals. One Football League player, for example, is thought to be owed ,000 27,000 upon leaving a club who, let’s just say, could do without paying. 27,000 to a player heading out the door.

Finally, after all that, some actual football. Thursday will see England’s final friendly before Euro 2022 as they face Switzerland in Zurich, their last tune-up before the tournament opener against Austria next Wednesday.

It’s Sarina Wiegman’s last chance to mull over answers to the remaining questions about her team. Who’s going to play up front? Is there space for Fran Kirby? What about Ella Toone? Who’ll start at left-back? Does the 5-1 win over the Netherlands put undue pressure on an already pretty pressurised team?

If nothing else, watching that might be a good way for anyone trying to understand all the financial chicanery to defog their brain a little. That, or the ice cream thing.